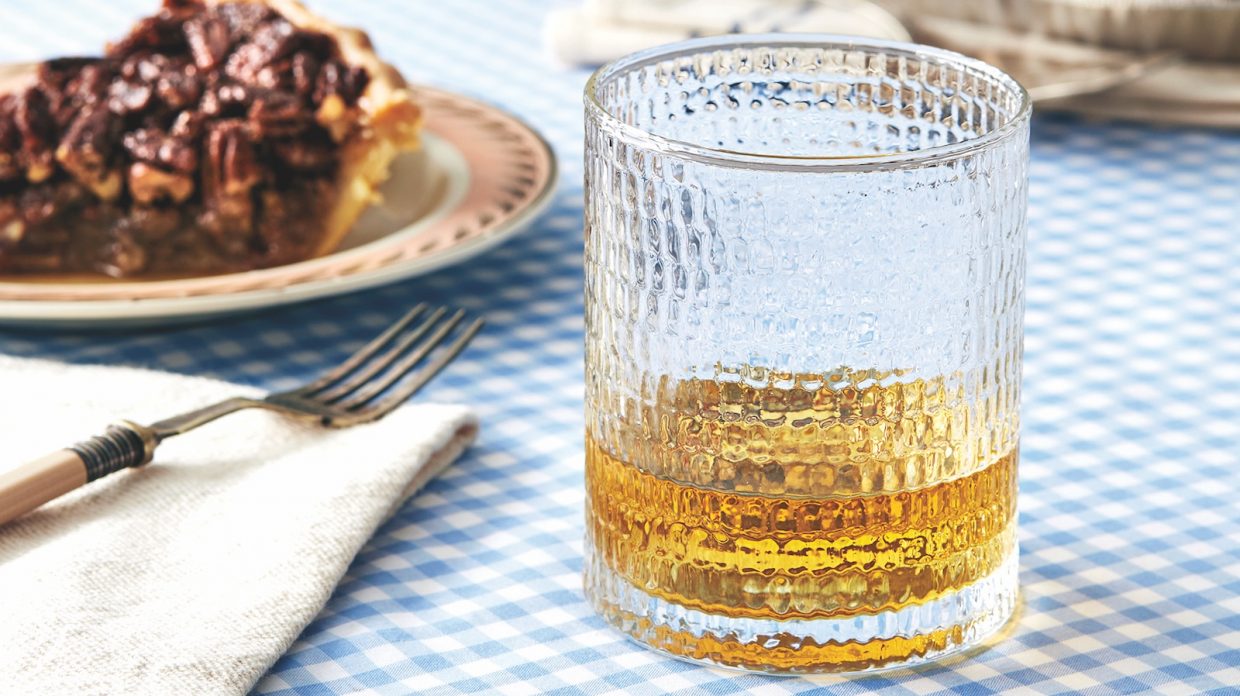 Pair the nuttiness of pecan pie with the vanilla and caramel of bourbon. (Photo by Jeff Harris)

When it comes to food and beverage pairing, dessert has always gotten short shrift. In the once-revolutionary, now-classic Red Wine with Fish: The New Art of Matching Wine with Food (Simon & Schuster, 1989), authors Rosengarten and Wesson all but ignore sweets, and even in more modern efforts like John Szabo’s Pairing Food & Wine for Dummies, desserts appear only rarely.

Fortunately, where wine is found lacking, whisky is more than capable of stepping in. Particularly so when the autumn harvest and Thanksgiving tradition serve up a display of sweet pies.

Someone who needs no convincing of this fact is Kathy Hanson, the 2018 winner of the professional best of show award at the American Pie Council’s National Pie Championships. A culinary training cook at the Ritz Carlton in Orlando, Florida, Hanson is not only a believer of whisky partnered with pie, she also likes to use spirits in her pies.

Fond of using both bourbon and Canadian whisky in her baking, Hanson emphasizes quality in her spirit selection, noting that “the better the whisky, the less you need to use.” For home bakers, she also counsels that cold fat is the secret to a good pie crust, adding that she will keep her leaf lard—the highest and purest grade of lard—in the freezer until it’s ready to be used. From a baker’s perspective, Hanson is quite partial to wheated bourbon both in and alongside peach pie, so much so that she sometimes skips the baking altogether and simply enjoys the plain fruit with bourbon.

Apple pie, which often includes cinnamon and spice, unsurprisingly pairs well with spice-forward Speyside whiskies like Glenfiddich 15 year old and the Macallan Fine Oak series. Best to use a wide-mouthed glass, so that the spiced aromatics of the whisky mix and mingle with the flavors from the pie.

The iconic status of pumpkin transcends the annual flood of “pumpkin spiced” this and that. And it is that spice—typically a mix of allspice, nutmeg, and cinnamon—that guides the way to a whisky pairing: a relatively robust wheated bourbon like Maker’s 46 suits lightly spiced pies of the kind you might buy at a supermarket. More rye-dominated or even straight rye whiskeys like Old Overholt, with all of their attendant spiciness, favor the fuller flavors of home-baked pumpkin pies.

Pecan pie is a flavor of the South, with a sweetness so bold it would belittle most wines. Bourbon, however, proves a fine foil: the richer and sweeter the pie, the bigger and rounder the bourbon should be.

Considering that supermarket pies are a fact of modern life, Hanson has a couple of tips for choosing what pie to buy. She suggests looking for tiny imperfections in the crimping of the crust, a sign that it’s handmade, and cautions that while a light glaze is a lovely attribute, too heavy a glaze on a pie may suggest that the baker is hiding something.

Bushmills Black Bush + Cherry Pie
The whiskey brings forward the almond notes of the cherry in an unexpectedly wonderful way.

Woodford Reserve Double Oaked + Pecan Pie
The rich vanilla and cooked caramel of the bourbon evokes and enhances similar flavors in the pie.