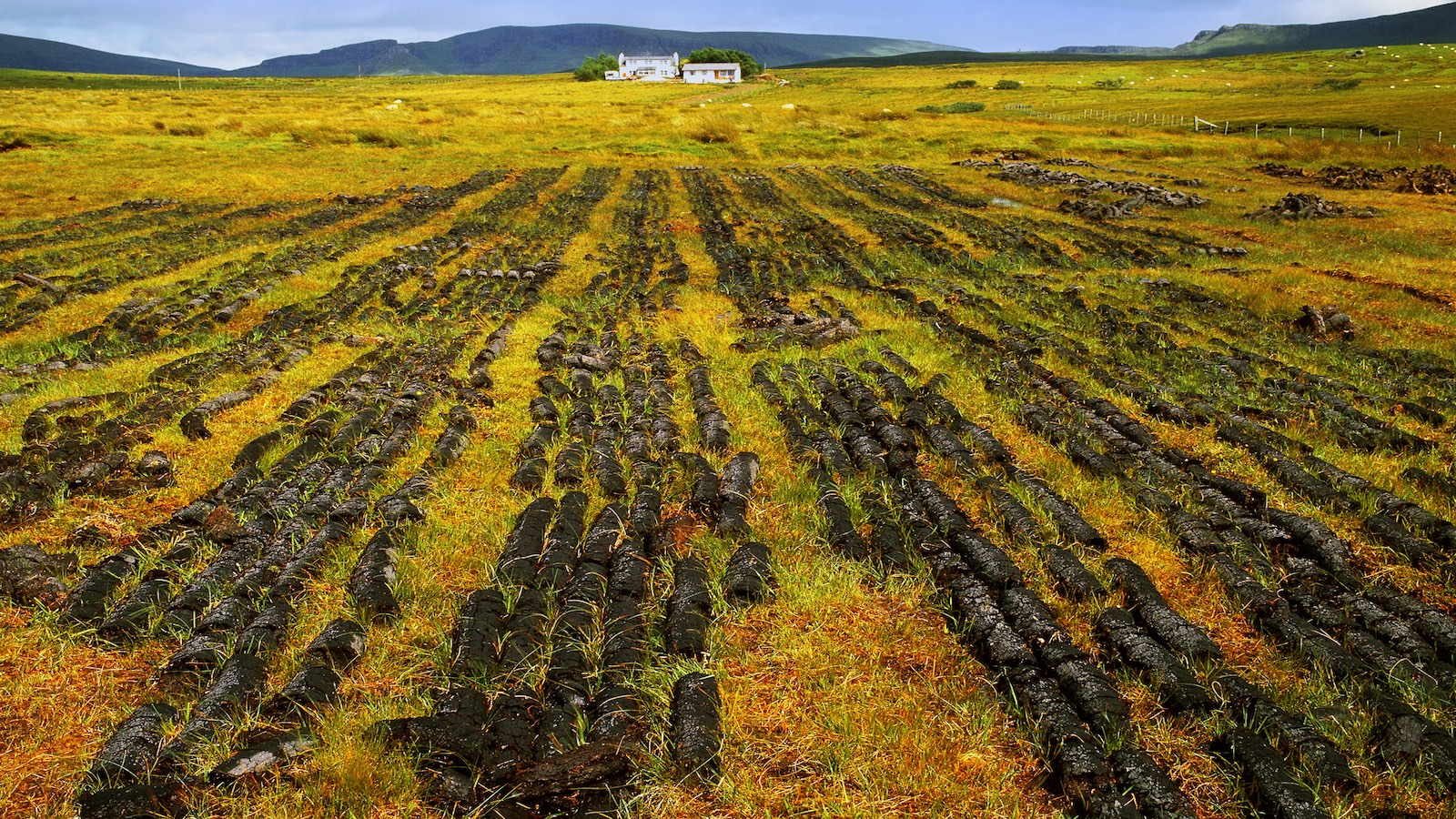 Although the scotch whisky industry's use of peat is fairly small, measuring the natural fuel's carbon footprint is an important consideration. (Photo by iStock/kodachrome25)

It takes several years—sometimes many—to age a good whisky. But a peated whisky is even longer in the making: centuries at least and often millennia. If we could travel back to Scotland’s eighth century, you might see marauding Vikings charging ankle deep through waterlogged vegetation—the very vegetation that today, compressed and partially decayed, is burned to produce the smokiness of our favorite Scotch whiskies.

“Peat plays an essential role in Scotch whisky production by providing distinctive flavors…from different peat sources,” says Graeme Littlejohn, deputy director, strategy and communication (London) of the Scotch Whisky Association. Peat in Scotland—and elsewhere—is made up of millions of plants that subsided into an ancient marsh, sometimes stemming back to the end of the last Ice Age. Over time these marshes filled with dead plants and became bogs or fens. Here, the water creates hypoxic conditions—a lack of oxygen—halting the plants’ decay and thereby locking in massive amounts of carbon.

“When peatlands are damaged, carbon is lost both directly into the atmosphere as greenhouse gases and eroded into our rivers and streams,” said Julia Quin, communications officer for Scotland’s Peatland Action program.

Smoke Trail: How Peat Smoke Gets into Whiskey

A scotch distillery might pay around £150/$200 per cubic meter of peat, but in terms of climate change, peat is priceless. The world’s known peatlands—many in the tropics remain undiscovered—store twice as much carbon as all of the world’s forests. It’s estimated that all of the UK’s peatlands combined store a staggering three billion tons of carbon—20 times more than its forests. Beyond this, peatlands worldwide are vital for filtering water, mitigating flooding, and housing unique species found nowhere else. For example, the Borneo peatlands of southeast Asia are the final refuge for the endangered Bornean orangutan. The population has declined dramatically with the destruction of the peat forests—forests with waterlogged soil that prevents the complete decomposition of plant matter—that since the 1990s have been reduced by a third; an area equivalent to the size of Israel.

But profiting from peatlands is nothing new. Historically, peatlands were drained and burned as a fuel throughout the British Isles. This is how smoke originally ended up in their whisky: the industry employed peat fires during malting to dry barley or other grains, imparting the distinctive flavor.

“Peated whisky is the original style of whisky, the ancestor from which all current whiskies descend,” said Matt Hofmann of Westland Distillery. Westland is currently aging an American whiskey smoked using peat from a bog in their home state of Washington.

Whisky distillers no longer burn peat as the primary fuel to dry their grain, but they do burn some dried peat to infuse the grain with the smoke and impart its distinctive flavors. There’s simply nothing else that tastes quite like it. “The importance of peat—and lack of alternatives—for the whisky industry is widely known. The industry is therefore aware of the value in demonstrating its ‘wise use’ credentials,” said Quin, referring to guidelines developed by the International Peatland Society and International Mire Conservation Group.

Whisky lovers don’t need to be overly concerned with running out of UK peat anytime soon, but Clifton Bain, the director of the International Union for Conservation of Nature’s Peatland Program, says that the peat used in whisky is still “a finite resource” and impacts an especially endangered habitat: the lowland raised bogs. “Removal of the living vegetation across the bog surface exposes the whole system to drainage, deterioration, and prevents peat formation,” he said. Littlejohn describes the impact of whisky on peat extraction as “minor.” Indeed, less than one percent of peat extracted from Scottish bogs today makes its way to whisky. The majority goes to the horticultural industry and for fuel in fireplaces.

These commercial uses have damaged 80 percent of the UK’s peatlands, according to the International Union for Conservation of Nature. Peatlands can be restored to health by rewetting them, but sequestering lost carbon could take thousands of years. “By protecting and restoring peatlands we can safeguard the existing carbon store and support further peat creation, thereby helping Scotland meet its ambitious climate change targets,” says Quin.

While the Scotch Whisky Association is a member of Scotland’s National Peatland Group, Bain notes they have not been proactive in funding restoration efforts. “We would like to see much more widespread restoration support from an industry that is so intimately linked with the habitat,” says Bain.

A few whisky producers have led by example, such as Diageo, the parent company of Lagavulin. In 2016 Diageo funded a peat restoration project of 700 acres on Islay as part of the Lagavulin 200th Anniversary Legacy Fund. “We make every effort to use this resource as responsibly as possible,” says Diageo’s head of corporate relations Ian Smith. It certainly makes sense for an industry that gives many people their first and only encounter with peat to help raise awareness of its importance. “It would be very exciting if the industry could collectively assist in a major peatland restoration initiative” says Bain, adding that companies could also commit to a restoration fund to ensure peatlands aren’t left degraded.

Bain proposes that scotch producers might also curb their impact by using peat that has already been removed for other purposes, such as for new housing and commercial developments. However, scotch distillers, often literally mired in tradition, may be wary that changing peat will change the whisky’s flavor. That deviation from tradition is a prospect that others, like Westland, embrace. “Based on our experience tasting Scottish single malts using peat from different geographic locations it seems likely there will be a taste difference. What that difference will be is still to be discovered,” says Erik Bennett, Westland Distillery’s communications specialist.

For peated whisky lovers who want to have a positive impact and offset their own peat-loving footprint, there are conservation groups involved in preserving and restoring peatlands. The UK is moving in the right direction overall. Through Peatland Action the government has committed to restoring over 100,000 acres by 2020 and spending £10 million (nearly $14 million) a year to do so. However, the same cannot be said of many other countries. In the tropics, vast peatlands are just being discovered even as they are rapidly drained for expanding agriculture, leading to massive emissions of carbon dioxide.

There is no alternative to peat; neither for whisky drinkers nor planet Earth. To that end, the whisky industry needs to ensure it’s using as little peat as possible and doing its part to safeguard and restore our world’s miracle ecosystem.

What Exactly Is Peat?
Peat is a soft organic material consisting of partially decayed plant matter together with deposited minerals. When dead vegetation accumulates in waterlogged soils, a lack of available oxygen creates anaerobic conditions that delay decomposition, and over time peat is formed.

Where Is Peat?
Peat is everywhere. It’s found in 175 of the world’s roughly 196 countries. Depending on the method of measurement, Russia and Canada are closely tied for the greatest peat deposits.

Bogs vs. Fens
A bog is filled by precipitation, while a fen is a depression that fills with groundwater.