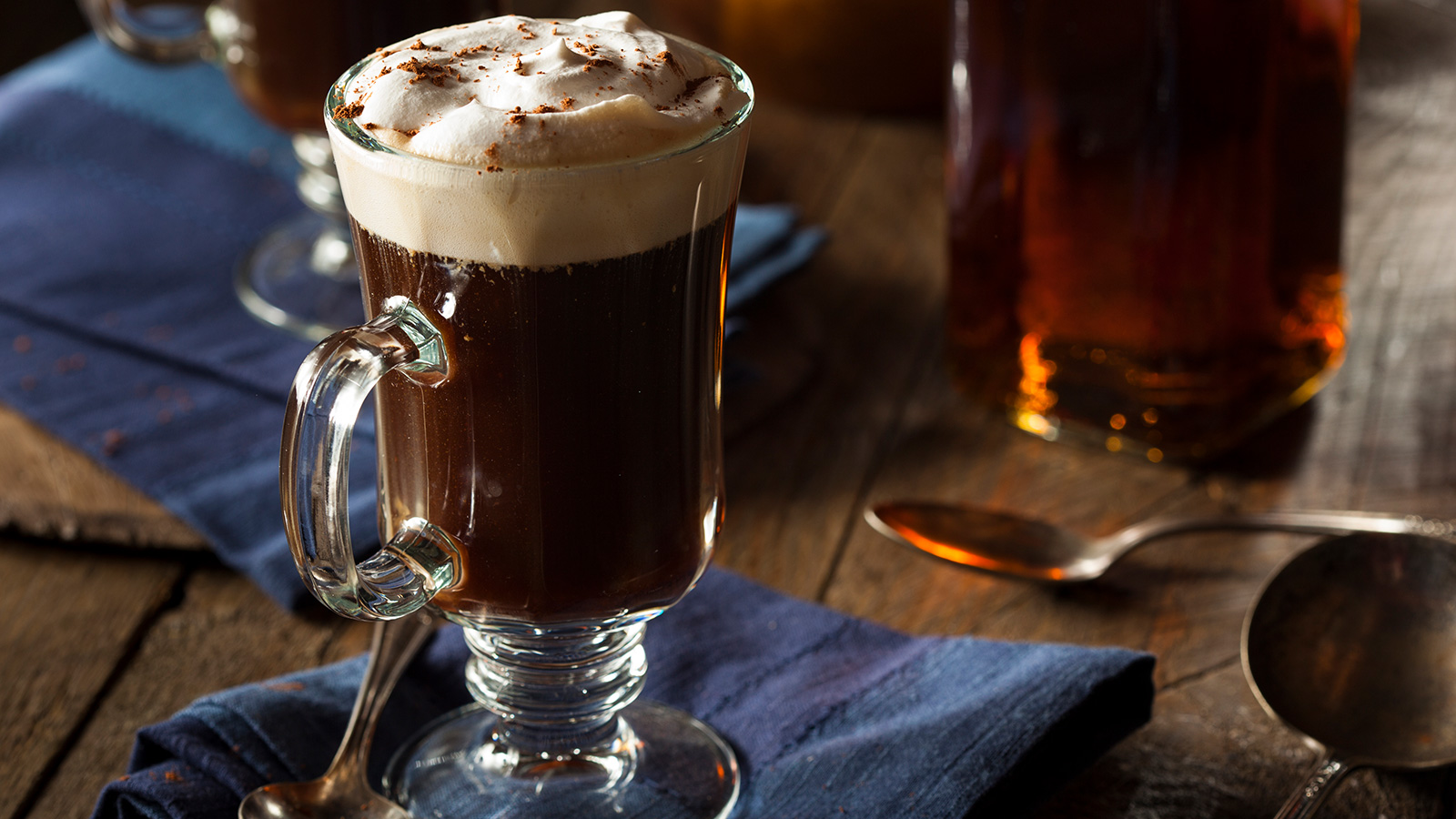 With only a few ingredients, you can whip up a number of different Irish coffees. (Photo by iStock/bhofack2)

The Irish coffee hits all the marks of a great whiskey cocktail: delicious, beautiful, and easy to make and customize according to your taste. There are many variations, from using flavored coffee to serving it on ice, but in the end, the perfect Irish coffee is the one you like best.

The basic recipe for Irish coffee is simple: Add 2 teaspoons demerara sugar to a warm mug or Irish coffee glass. Add 4 to 6 oz. hot coffee and stir well to dissolve sugar. Add 1½ oz. Irish whiskey and stir to combine. Float whipped cream on top by pouring it over the back of a spoon.

Using that as a starting point, follow these tips to craft an Irish coffee that’s perfect for your palate.

The 5 Key Elements of Irish Coffee

The Coffee
Some people prefer light roast Colombian java while others only drink dark French roast, and you can pick pretty much any coffee for your cocktail. Although Morgan Carney, general manager and bar manager of Boston’s Grafton Street, uses an extra bold roast, he’s also used Americano and, for an iced version, cold brew. Flavored coffees are fine too, but if you go that route, the flavor of the coffee will be the dominant feature of the drink as opposed to the whiskey, says Kieran Aherne, regional manager at Fado Irish Pub. In that case, he advises, you may want to add less sugar. Whatever your preference, for classic Irish coffee, your joe needs to be HOT. Boil water and let it sit inside the glass for about 30 seconds. Then immediately add the hot coffee after you toss out that water. This will keep the glass hot and prevent your drink from cooling too quickly.

The Whiskey
For this cocktail, Irish whiskey is a given. While Jameson and Tullamore D.E.W. are often used, you can choose any brand. The go-to whiskey at Grafton Street is Glendalough Double Barrel, which adds a peppery kick to the drink. Most of the time, you’ll want to choose a blended whiskey, rather than single malt or pot still, whose more robust flavors would overpower the drink. Just remember to adjust the amount and type of sweetener and cream you use to suit the flavor profile of the whisky and achieve a balanced drink. (More on that below.)

The Sweetener
Brown or demerara sugar is the standard for Irish coffee, as it gives a rich, caramel note—just stir well to dissolve it. Swapping in simple syrup, honey, agave, or maple syrup can also work, but bear in mind that using liquid sweeteners will change the drink’s consistency.

The Cream
Whipped cream not only looks impressive crowning the cocktail, but its flavor and texture are an important part of the experience. “If you ask an Irish person, the cream is floated—no other option,” Carney says. “Some people have Americanized the drink by adding Baileys to it in lieu of whipped cream.” Grafton Street serves a compromise between the two techniques, whipping heavy cream with Baileys, powdered sugar, and cinnamon, and layering it on top of the coffee. But a sweet cream isn’t a necessity, according to Aherne, who doesn’t add sugar to his whipping cream. “If you have sugar in the drink, it’s sweet enough,” he says.

The trick for floating is to whisk or whip the cream until it’s lightly aerated—the whisk should leave lines behind. A hand or electric blender will work, but a stand mixer is best, according to Aherne. “Whisk it hard and fast by hand or at 75% on a blender, and this will take only a few minutes,” he says. It’ll be thick, but still liquid enough to flow right off the spoon and sit on top of your coffee. You can also pour it over the back of a spoon, or use two spoons and turn one upside down. “Pour the cream off one spoon onto the back of the other, which should be sitting right on top of the coffee, and it will float,” Aherne explains.

If you don’t eat or drink dairy, you can still make an Irish coffee. Whip refrigerated, full-fat canned coconut milk—it’ll float too.

Whatever you do, as much as possible, skip the canned whipped cream. “Fresh anything is always going to taste better than something that comes out of a can, and the aesthetic of the fresh whipped cream siting on the glass is also better,” Aherne says.

The Temperature
Visual presentation, with the contrast between black and white, is a big part of the Irish coffee. To avoid streaks of cream wisping into the black coffee, keep the cream as cold as possible until the last minute, and make sure the coffee is piping hot.

Making a non-traditional iced Irish coffee requires a different technique: infusing the whiskey. “I’ve made cold brew coffee, and thought, ‘What if you steep coffee grounds in whiskey instead of water?’” Carney says. “I tried it, and it’s super bitter and undrinkable on its own. But add brown sugar and some cream, and it’s fantastic.” (Full instructions below.)

How to Customize Your Irish Coffee

With a handle on the key components of the Irish coffee, you can play around with each to create a custom cocktail.

If you prefer a stronger coffee flavor: Pick a lighter whiskey, such as Jameson or Powers.

If you want to mask the coffee flavor: Use a lighter roast and/or add more sweetener and/or cream.

If you like your cocktails strong: Double the whiskey (you may need a larger glass).

If you want to add flavors: Omit the sweetener and combine a flavored liqueur like butterscotch or peppermint schnapps, Drambuie, amaro, amaretto, Baileys, or Frangelico—whatever suits your fancy—with the coffee, then top with cream. It’s best to use any flavor other than coffee, since that’s already part of the cocktail, or fruit, which doesn’t complement coffee well.

If you want more subtle flavor: Whip heavy cream with powdered sugar and ½ oz. flavored syrup, like those used in coffee shops. Your cocktail will pick up the flavoring as it travels through the cream float on its way to your mouth.

If you want it iced: Add 8 oz. cold brew grounds to a 750-ml. bottle of Irish whiskey. Steep 24 hours, then strain through coffee filters into a clean container and add an equal volume of water. To make an iced Irish coffee, use 2¼ oz. whiskey and add brown sugar or simple syrup to taste (Carney uses 1¼ oz. demerara syrup), stirring until it’s dissolved. Pour over crushed ice and top with cream.