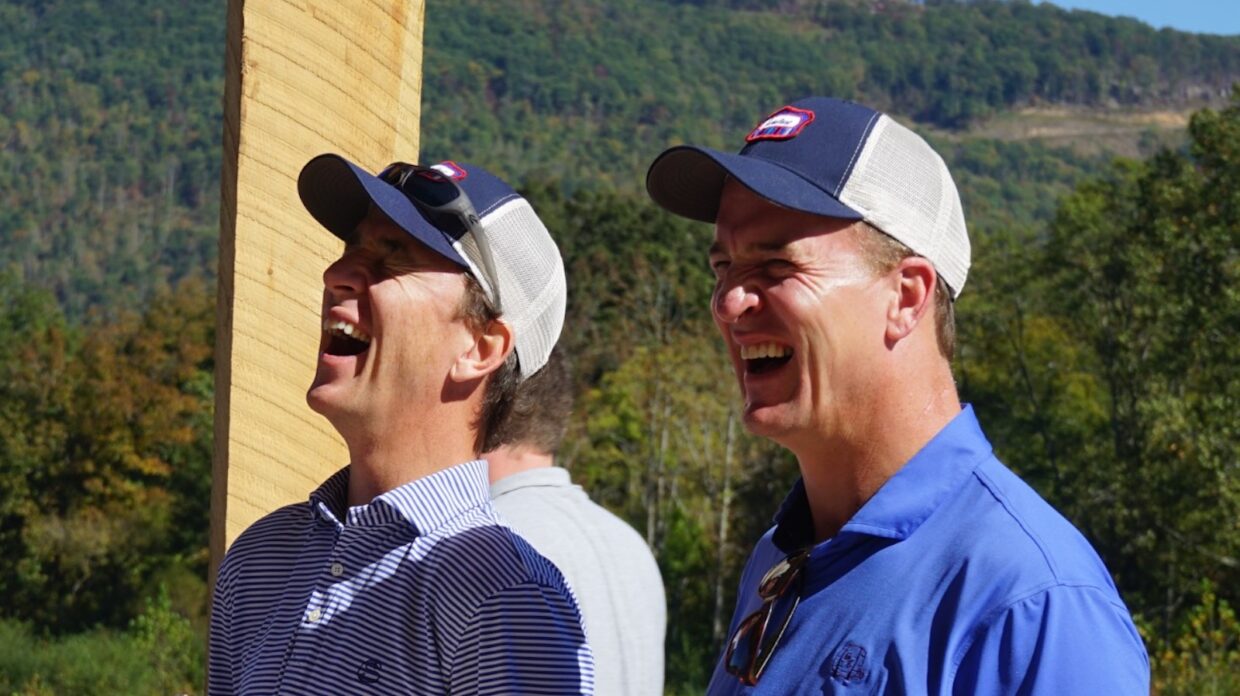 Brothers Peyton and Eli Manning sharing a laugh at Sweetens Cove, the golf course that inspired a new whiskey by the same name.

We all have drinking traditions—using only custom-inscribed rocks glasses or reciting festive toasts by heart—but their impact usually stops at the gesture. Yet a whiskey ritual at an obscure Tennessee golf course has inspired its own brand of bourbon, with All-Pro quarterback Peyton Manning and tennis great Andy Roddick, among others, behind it.

The golf course in question is Sweetens Cove, a nine-hole public course in Marion County, Tennessee, about 33 miles from Chattanooga. It was bought by Manning and Roddick along with musician Drew Holcomb; Tom Nolan, former president of Ralph Lauren golf; course architect Rob Collins; and real estate developers Mark Rivers and Skip Bronson, in early 2019. Sweetens Cove has no clubhouse or even bathrooms, just a Home Depot shed, in which it’s traditional for players to take a shot of whiskey before each round. “Like they say there, ‘Take your first shot before your first shot,’” Manning tells Whisky Advocate. “[It’s] very authentic and real. And certainly a Tennessee thing to do.”

Even shared among a foursome, a shot or two each leaves whiskey behind, and over time bottles began to accumulate—a form of paying it forward from one group of golfers to another—yielding a mixed bag of styles. “The whiskey from the shot tradition was all over the map,” Roddick says, describing the shed as having plywood walls and ceilings. “[It] smells like socks,” he adds. “I’m pretty sure there wasn’t any Pappy. But our stuff is intended to be at the top-end and give Tennessee a real top-shelf product.” 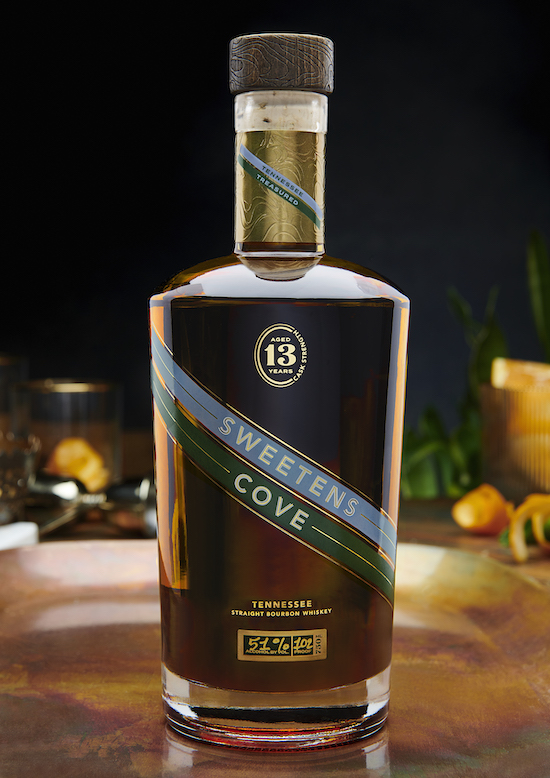 That stuff, Sweetens Cove 13 year old Tennessee Straight bourbon, is the handiwork of master distiller and blender Marianne Eaves, formerly of Woodford Reserve and Castle & Key. Eaves worked with 100 barrels of sourced 13 year old Tennessee bourbon, blending and bottling at cask strength with a final proof of 51.09% ABV for the first batch. The whiskey has an initial run of 14,000 bottles, which Eaves broke into five distinct but unmarked batches (the proof will vary between 50% and 52% ABV), to be released over the next few months. It’s currently for sale in Tennessee, with expansion to Georgia and additional states planned for June. In addition, Eaves selected four single barrels to be released later this year, before Christmas. “Only a few hundred total bottles will be available,” she says of the single-barrel offerings. “And we are working on products for 2021, which are very exciting and quite special also.”

The connection between Sweetens Cove and Manning might seem ambiguous, given his penchant for beer rather than bourbon drinking; the Hall of Fame-bound quarterback declared in 2016, after winning Super Bowl 50, that he planned to drink “a lot of Budweiser.” But Sweetens Cove was inspired by both the shot-taking tradition and the course’s special qualities. Golfweek named Sweetens Cove No. 49 among its top 100 modern golf courses in 2019, and Golf Magazine described it as having “stripped the sport down to its bare bones, removed all that was unnecessary, and left something pure and joyous.”

“The whiskey has been, from the very beginning, about creating a high-quality, premium product. It had to be unique and one-of-a-kind, like the golf course,” Manning says. His connections to the state, as an alumnus of the University of Tennessee, also played a role. “Attending UT and continuing to spend lots of time all around the state, I’ve seen my share of whiskey and bourbon products over the years,” he says. “It is certainly something of a legacy product in Tennessee, with great roots and history. We are proud to follow in the footsteps of that and, add our own twist.” Though he may be early in his whiskey journey, since launching Sweetens Cove, Manning says he’s had a few sips and “really [enjoyed] it.”

Roddick similarly describes himself as a “whiskey apprentice,” learning and earning his way into the industry. “Maybe we can bring some ‘new school’ thinking to it,” he says. “But we are in it to build a lasting, meaningful brand and roll out amazing products.” At $200, Sweetens Cove is “probably a little expensive for ‘The Shed,’” Roddick notes, “but perfect for a day of golf.” Manning says that he likes to enjoy it with an ice cube or two. “It is an experience for friends to share and enjoy with each other.”

Manning was in fact seen enjoying a beverage this past weekend as he and Tiger Woods defeated Tom Brady and Phil Mickelson in The Match 2, a charity event that raised $20 million for COVID-19 relief. Was there Sweetens Cove in Manning’s Tennessee state flag cup? “Tiger told me not to reveal any of our strategies and keys to victory,” he says. “But let’s just say what was in there provided a winning edge.”