Distilled in 1989 and matured first in Pedro Ximénez, then in oloroso sherry-seasoned casks. Delicate and restrained on the nose, with apple, pear drops, ginger, and malt. Initially, sweet sherry, then dark berry fruits emerge on the supple palate, with oatmeal stout. More apples, and ginger, plus prunes and chili in the long, warming finish. An excellent release from an underrated closed distillery. (4,976 bottles; 600 for the U.S.) 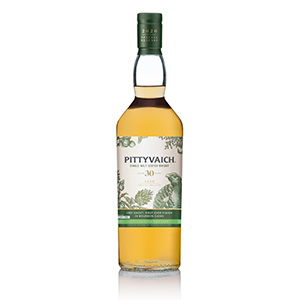 The lost Dufftown distillery of Pittyvaich last appeared in the Special Releases as a 25 year old in 2015. Like that bottling, this was also aged in refill American oak hogsheads. Initially, it’s slightly savory on the nose, with salted caramel, walnuts, and spicy raisins. Oily on the palate, with pineapple, apple crumble, malt, cinnamon, and nutmeg. Toffee, milk chocolate, and licorice in the peppery finish. (4,680 bottles)

Good to see Pittyvaich back in the Special Release roster. Here we have the heavy, nutty character of the distillery given full expression. The emphasis here is on a mix of nuts, cake mix, and dense fruits: even a little hint of cigarette tobacco. When neat, the palate has real density that is enlivened by water, which brings out fresher—and decidedly more green—notes. Worth a dram.