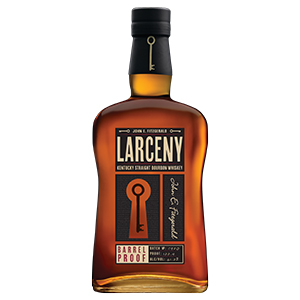 Wheated bourbons, which feature wheat rather than rye as their secondary grain to corn, have attracted legions of devotees in recent years despite being relatively few compared to their rye counterparts. “Wheaters” like Pappy Van Winkle have achieved rock star status, putting them out of reach for many of us. So when we taste a widely available wheated bourbon that displays the soft, sweet, fruity profile of the style, we take note. Larceny Barrel Proof, our Whisky of the Year, delivers on wheated bourbon’s appeal and then some. Big and powerful, it enters the ring at 61.1% ABV, but it’s no lumbering heavyweight. It floats across the palate with stunning grace and subtlety, its wheated mashbill a delicate counterpoint to its formidable proof. It begins with a flurry of sweet bakery aromas: honey bun, angel food cake, and apple pie à la mode. The palate dazzles with notes of crème brûlée, chocolate, drizzled caramel, honey-roasted peanuts, and lashings of baking spice, followed by a lengthy finish loaded with cinnamon, more chocolate, and robust spice. Water helps unleash layers of these flavors, but Larceny Barrel Proof is amazingly enjoyable even at full proof—no easy thing for a whiskey this big. The original Larceny Small Batch debuted in 2012 as the modern heir to owner Heaven Hill’s historic wheater, Old Fitzgerald. Following a few special appearances, this barrel-proof version launched to the general public in January 2020, offering wheated bourbon lovers an exceptional treat that’s also widely available—at a very affordable $50. Larceny Barrel Proof is released in three batches annually, in January, May, and September. Each year, the releases are labeled with a code using a letter to indicate the sequence, and three digits indicating the month and year. This award goes to B520, but you’d be wise to give any of them a try. Number 1 in the 2020 Top 20 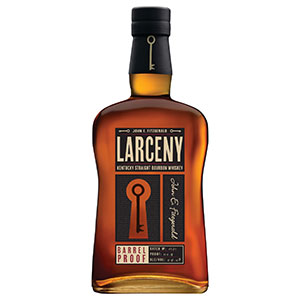 Larceny’s barrel proof expression, released in three batches annually (January, May, and September) is a treat worth waiting for. A fragrant herbal nose offers notes of fennel, dark chocolate, peppermint, and light coconut. The palate is notably smooth, with flavors of chocolate, cooked dark fruit, black pepper, and generous spice, all underpinned by balanced oak. Water smooths it out even more, bringing out candied orange, pepper spice, and bitter chocolate.

Powdered sugar, vanilla frosting and other bakery shop notes on the nose, as well as leather, iced tea, dark chocolate, cherries, and plums. The palate offers spiced chocolate, toasted almonds, cinnamon, pepper, vanilla cream, and well-integrated oak. The finish is spicy and powerful, with semi-sweet chocolate, raisins, walnuts, leather, and pipe tobacco. A big whiskey that carries its proof remarkably well—savory and sweet, but with subtlety and balance. Editors' Choice

Lots of dried fruit, figs, and caramel lead off this bold but balanced bourbon, as dark berry fruits smack of sweet crème de cassis on the palate. There’s a good bit of spice here, like hot and spicy peanuts, that meets the sweet fruit and vanilla. Shows great length and nice polish on the finish with its dusty oak and cocoa.