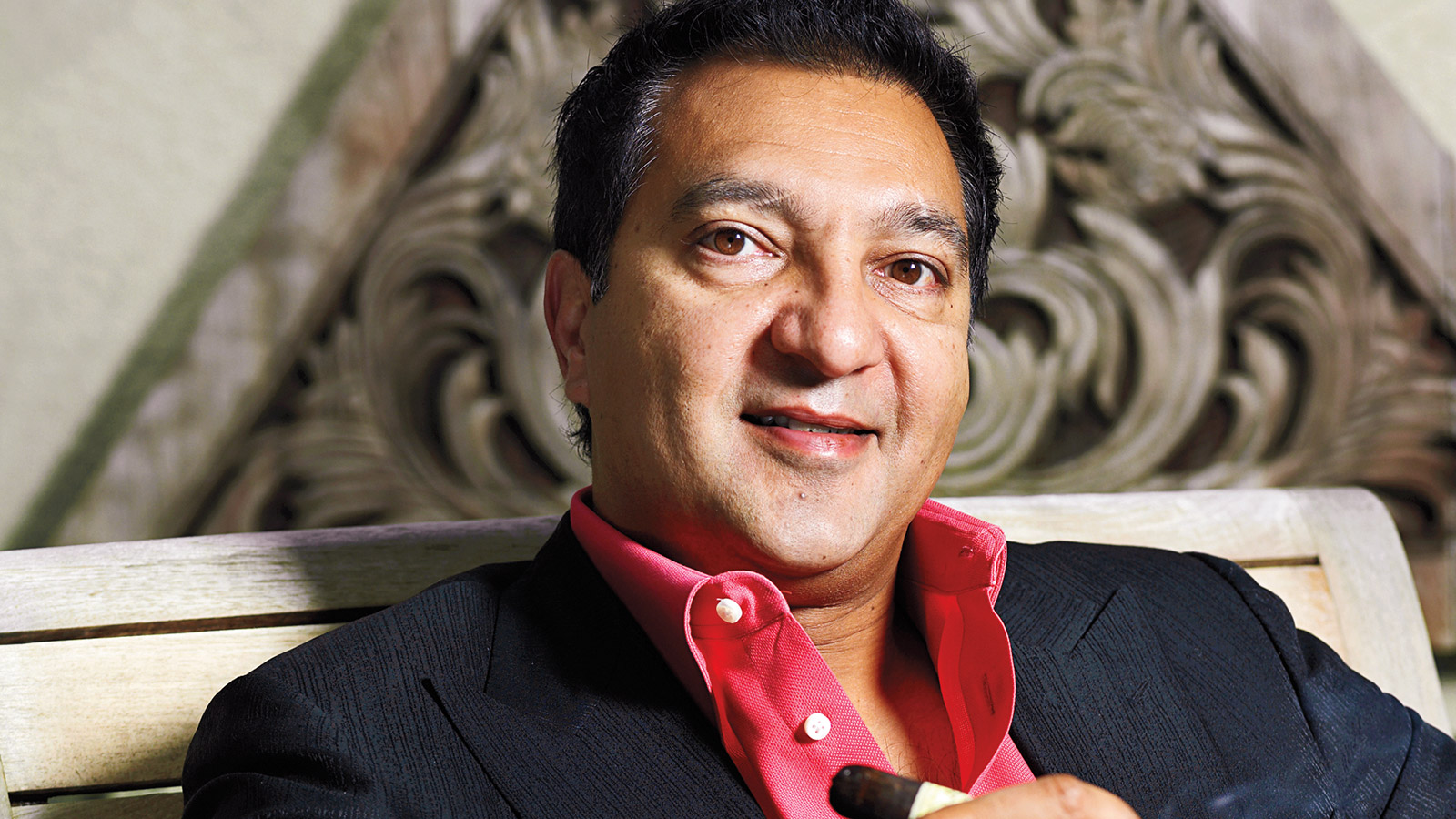 For many people, making it in Hollywood is the culmination of their dreams. For Rocky Patel, it was more like the beginning. Born in Mumbai and raised in India and Wisconsin, Patel was a high-powered Hollywood lawyer when he fell in love with scotch and cigars. Soon, he decided that the only thing more exciting than living the luxury lifestyle was sharing it with others. Patel took a chance in the waning days of the 1990s cigar boom and charged into the premium cigar industry. Today, the founder and CEO of Rocky Patel Premium Cigars is an evangelist for sophisticated living. Most recently, his Rocky Patel Sun Grown Maduro Robusto was named Cigar Aficionado’s No. 2 Cigar of 2016. And when Patel holds a cigar in one hand, there is usually a single malt in the other.

“If I’m enjoying a cigar and sipping, then I like a nice single malt, usually with one ice cube,” Patel says. “I like to play around and try different stuff all the time. I get bored of drinking the same stuff.” He loves peaty malts like Lagavulin and Ardbeg, sherried scotches like Glenmorangie and Glenfarclas, and some older Balvenies. “I have probably about 60 different single malts at home,” he says.

The tireless CEO also travels relentlessly, more than 300 days a year, and he often finds himself hunting down favorite drams in far-flung hotels and restaurants. “When I’m traveling, I try to see if I can get some of the Glenfarclas,” Patel says. “Sometimes they’ll have an Ardbeg. Every once in a while, if I can get an old Dalwhinnie, that’s special—I enjoy that.” Glenmorangie 18 year old is another staple on the road.

Born and raised in India, Rocky Patel says the country’s British legacy helped incubate his love of whiskies. “We’ve been brought up to drink scotch,” Patel says. Johnnie Walker Double Black and Black Label—a whisky with a long history on the subcontinent—are among his everyday drams. He has also given Indian single malts a spin and recently found a new favorite, Paul John, a whisky from the state of Goa on India’s Western coast. “I think they’ve done a phenomenal job as a whisky,” Patel says. “It’s made like a scotch-style.”

For Patel, scotch is the ideal accompaniment to cigars; he finds most rums too sweet and Cognac too alcohol-forward. “The aromas in scotch are very balanced with a good cigar,” Patel says. “The alcohol content is not so high and you get a lot of that caramel, you get a little bit of that salt, you get a little bit of that cocoa and nutmeg.” Highland malts pair well with medium-bodied cigars, like the Rocky Patel Decade, while a full-bodied cigar has him reaching for Lagavulin 18 year old. “I enjoy that very much because of the peatiness,” Patel says. “You get a lot of charcoal, spice, pepper, a little bit of salt on the palate.”

Patel is excited that the younger generation is developing sophisticated tastes. His cigar lounge, Burn by Rocky Patel in Naples, Florida, aims to help them along. The venue eschews the traditional cigar lounge stereotype—dark wood, banquettes, dusty tomes—for an eclectic and cosmopolitan look influenced by Cuban, Moroccan, and Asian designs. Burn may have live music and a DJ, but it doesn’t skimp on substance either: the lounge carries 65 different single malts, along with bourbon, tequila, rum, and—naturally—cigars. “A lot more young people, including women, are coming in and trying cigars for the first time,” Patel says. “We’re seeing a big shift toward people starting to drink the bourbons and the ryes and the single malts. They’re earning more, they’re working harder, and they want to live the luxury lifestyle.”