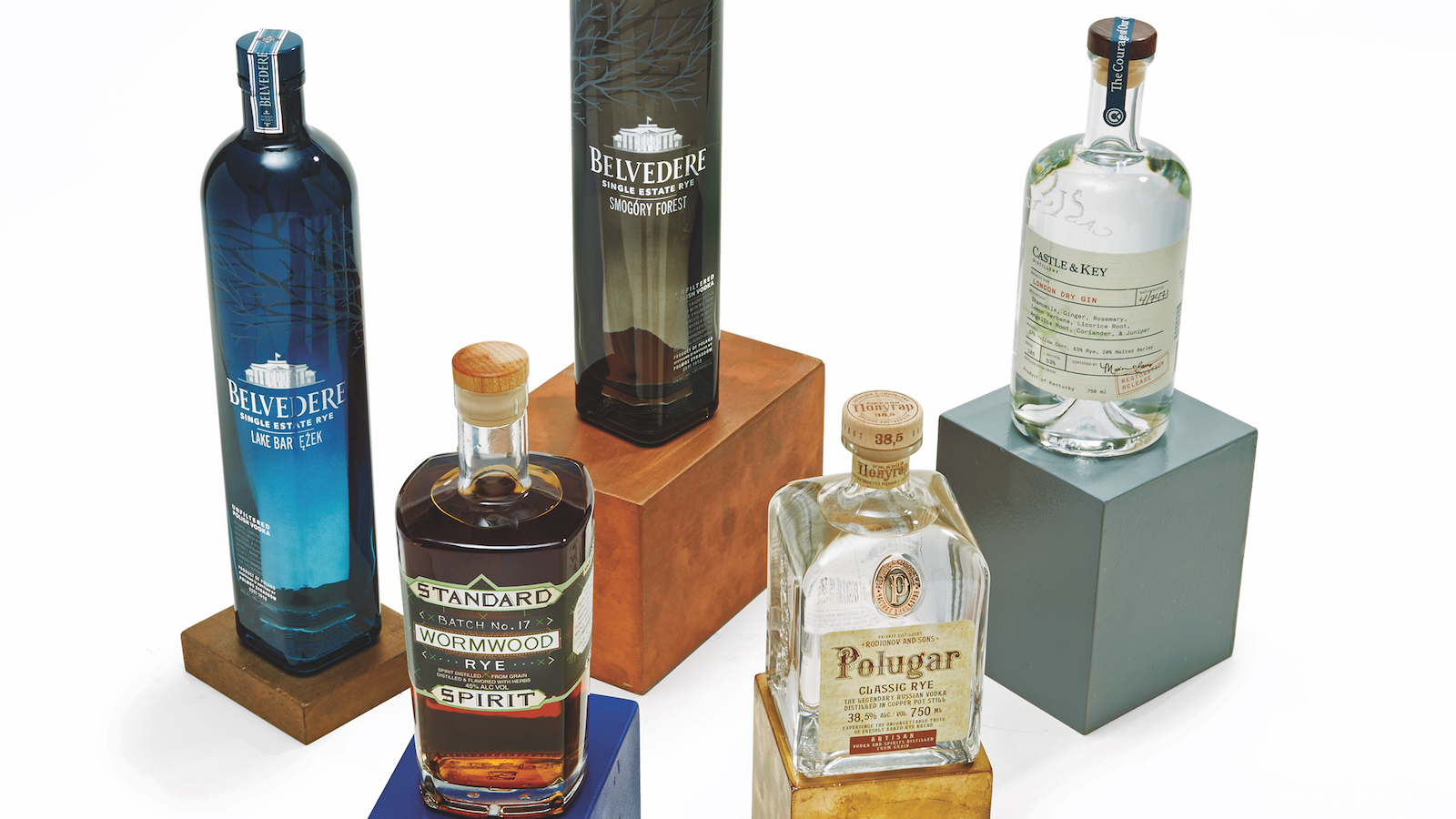 Rye fanatics can venture beyond whiskey to experience their favorite grain in vodka, gin, and other rye spirits. (Photo by Jeff Harris)

Bourbon doesn’t usually taste like the corn it’s made with, and vodka rarely tastes of potatoes, grapes, or whatever the distiller chooses. Then there’s rye, a grain that likes to stand and shout. We’ve rounded up a few examples where rye has spilled over into other spirits, so rye fanatics can experience their favorite grain—even beyond whiskey.

St. George Spirits’ master distiller Lance Winters notes that relatively flavorless grain neutral spirit (GNS) forms the foundation for most vodkas and gins. “A GNS base is like a blank canvas that allows botanicals to show their true colors, unadulterated. With rye as [our] base, it’s like we’re painting botanicals on black velvets,” he says. St. George’s Dry Rye gin is malty and robust, so Winters doubles down on the amount of juniper used in his non-rye gins. St. George also offers a Dry Rye Reposado gin, rested in French and American oak wine casks.

Devoid of oak or other flavorings, rye vodka is like rye undressed. Belvedere offers two single-estate vodkas named for their respective Polish farms: Lake Bartężek farm is known for crystal-clear lakes and long, snowy winters; Smogóry Forest enjoys milder winters and vast timberlands. “Due to the different terroirs of each vodka, the notes and characteristics of each vary. You really can feel the essence of the land in these two vodkas: the character of the woodland in Smogóry Forest and the fresh, light, delicate aroma of the snowy lakes in Lake Bart˛e˙zek,” says Matt Pomeroy, global director of education and advocacy for Belvedere Vodka.

Standard Wormwood rye from Brooklyn is sort of an absinthe-whiskey hybrid. “When we vapor infuse the rye we bring out a unique roasted grain spiciness that plays with some of the deeper chocolaty notes of the wormwood,” explains Standard Wormwood Distillery co-founder Sasha Selimotic.

Rye whiskey fans will find some familiar flavors in these rye spirits.

Belvedere Single Estate Vodka series: Smogóry Forest and Lake Bartężek—40%, $53
Each of these unfiltered vodkas utilizes Dankowski rye sourced from an individual Polish farm. Smogóry Forest is briny yet sweet, redolent of salted caramel, while Lake Bartężek is more mellow, slightly toasty, with just a hint of cracked pepper on the finish.

Castle & Key Restoration Release Gin—53%, $23
This London dry gin uses the same mashbill (63% rye, 17% yellow corn, 20% malted barley) that was used for their aging rye whiskey. Botanicals include chamomile and rosemary; the release is sweet and creamy, with peppery notes on the finish.

Standard Wormwood Rye—45%, $53
New York rye is used in the mashbill, with wormwood (the botanical of absinthe fame) added after fermentation. The result is a grainy spirit, somewhat whiskey-like, but with a bitter, drying finish. Works well in a Manhattan or Sazerac.