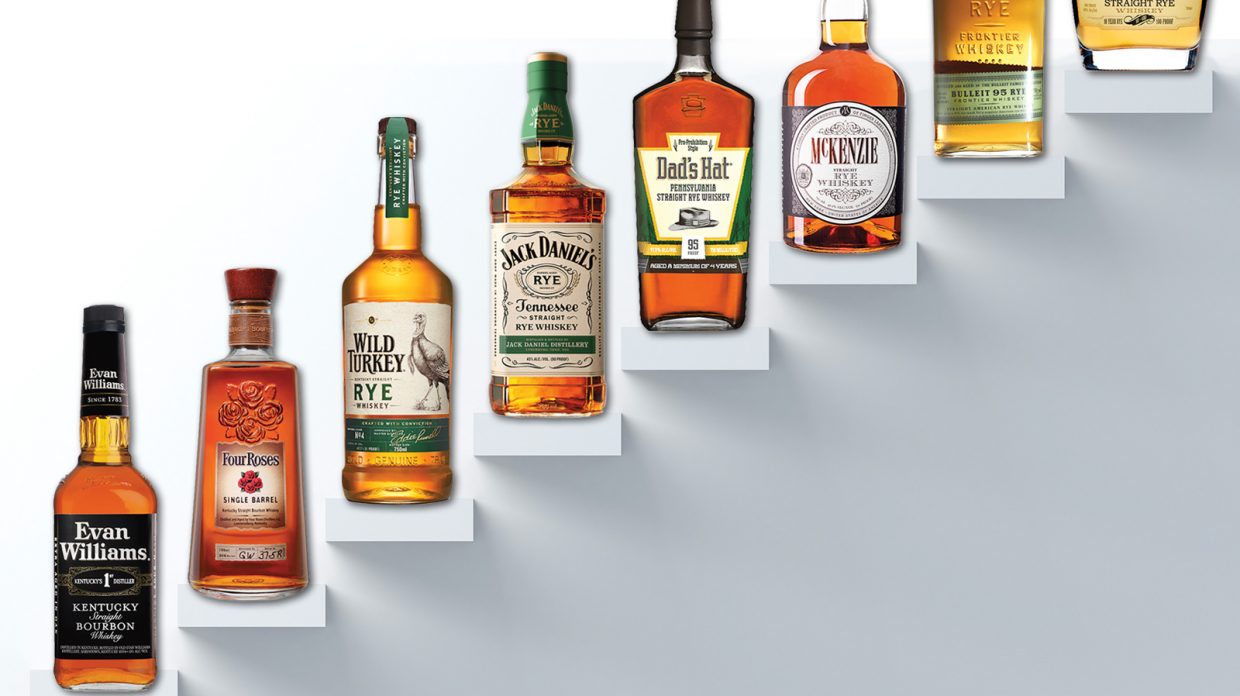 Rye is a traditional grain in both American and Canadian whiskies, notable for adding spice-like complexity even when used in small quantities. Some whisky renditions using rye are legally defined, like American rye whiskey with its minimum 51% rye. Others, like high-rye bourbon, are more generally accepted styles. Whether you prefer just a faint hint of rye or the jolt of 100% rye whiskey, this spectrum of lively rye-laced whiskeys will get your palate racing.

While corn is always the primary ingredient in bourbon, rye is a traditional flavoring grain. Bourbons that don’t include any rye often feature wheat instead.

Rye grain is a popular flavoring component in bourbon, which is made primarily from corn. Although not legally defined, bourbons that include 20 to 35% rye are often called “high rye” and deliver an extra helping of spice notes.

Legacy Kentucky distilleries usually stick close to the legal minimum amount of rye (51%) coupled with a lot of corn and well-aged in deeply charred barrels. By design, these are the rye whiskeys that most resemble bourbon.

Like Kentucky rye, these whiskeys include corn, but with a rye content beyond the minimum 51%. Ironically, Jack Daniel’s rye is not Tennessee whiskey, which requires 51% corn.

A historic style from Western Pennsylvania characterized by high-rye content, no corn, and aging in new, deeply-charred oak barrels. Modern renditions vary, but often show rye flavor with a biscuit note from malt.

A newly created style that is defined as straight rye whiskey made in New York State using a minimum of 75% rye grain grown entirely in New York and distilled during one distilling season.

Rye from Indiana’s MGP Distillery is the source of many of the current wave of new rye whiskeys. Rye whiskey that indicates it is a product of Indiana on the label is generally from the MGP recipe of 95% rye, with some producers differentiating their products by secondary aging in various barrels. While not from MGP, New Riff closely mimics the style: it’s made in Kentucky with 95% rye and 5% malted rye by a former MGP distiller.

Of the 100% rye grain whiskeys available, most are either the work of craft distillers, or are sourced from Canada and then blended or bottled in the U.S. They lean more fruity than spicy, relatively dry.