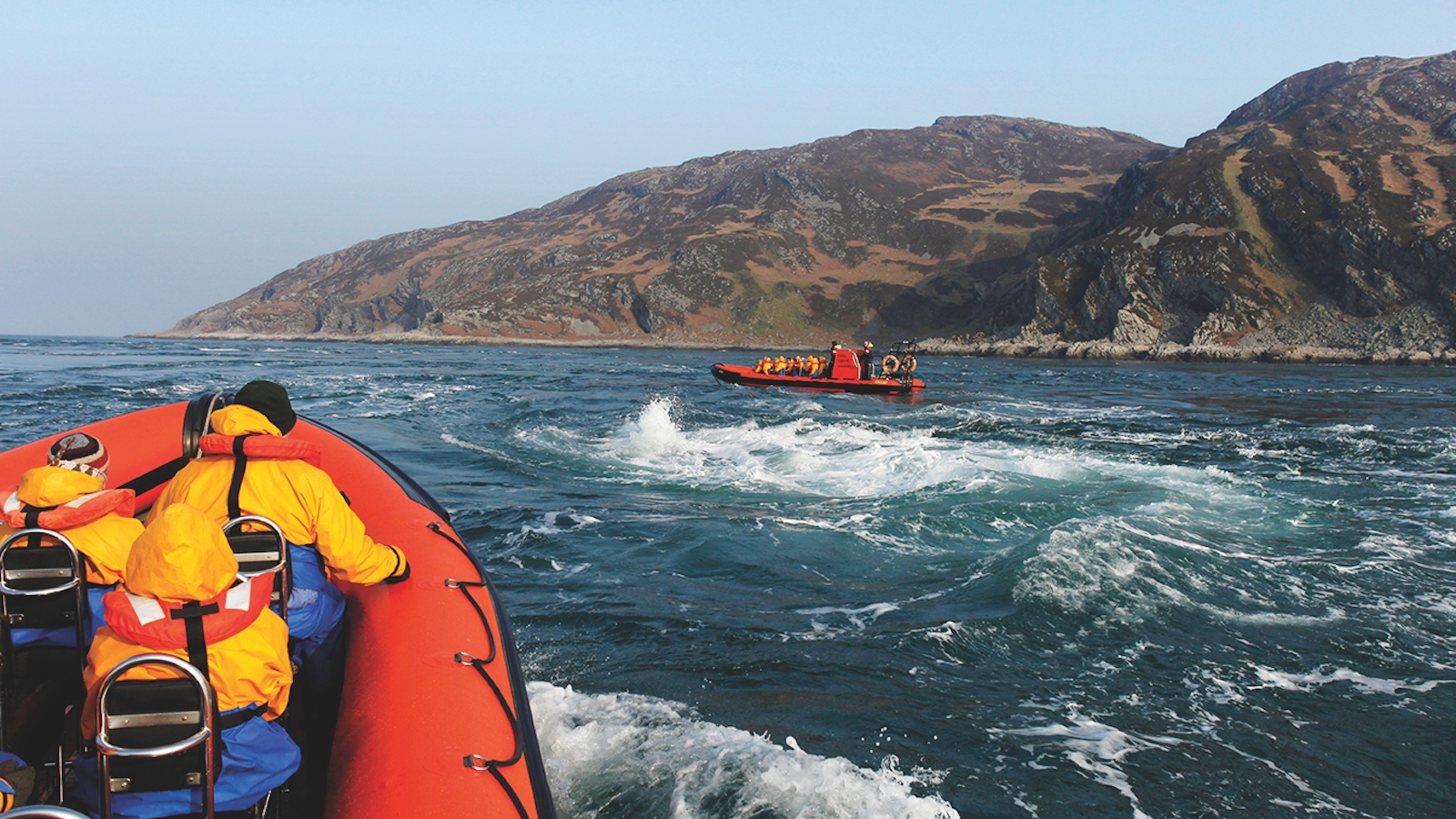 See the the Gulf of Corryvreckan for yourself. (Photo by Paul Tomkins / Scottish Viewpoint)

Mainland Scotland’s craggy coast wanders for over 6,000 miles. Add in the islands, and you have around 10,000 miles to explore. These are some of our favorite ways to experience the sea, outside of a briny dram, of course.

Dundee is home to the new V&A (Victoria & Albert) Museum of Design, opening this fall. Japanese architect Kengo Kuma’s structure, showcasing the best design from around the world, was inspired by the cliffscapes of Scotland’s coast.

The Open returns to the historic links course at Carnoustie this summer. The 6th hole, Hogan’s Alley, can make or break a player’s day, and the weather can often be cruel, adding to the challenge. Zach Johnson, Ernie Els, Jordan Spieth, and Dustin Johnson are expected to tee off.

Take a Dram on the Wild Side

The only way to reach the Old Forge pub at Knoydart is to trek eighteen miles over the mountains or make the seven-mile sea crossing. Fortunately, the warm welcome, thirst quenching beers, and great drams make the journey worthwhile (open March – October).

Boating through the raw power of the Gulf of Corryvreckan offers up-close encounters with whales, dolphins, seals, otters, eagles, and gannets. Be warned: the forceful whirlpools during the big spring tides are not for the faint-hearted.

Get a Window Seat

Marvel in the spectacular scenery from Europe’s only seaplane airline. From your luxury cabin in the sky, the mountain peaks, hidden lochs, remote islands, and deserted glens reveal themselves.

Older Than the Pyramids

Skara Brae is a complete Neolithic settlement on the western edge of Orkney’s mainland. Part of a UNESCO World Heritage Site, these well-preserved prehistoric houses even include stone furniture.

Race Through the Wilderness

The Coast to Coast Race is a two-day test of endurance across the spectacular Scottish Highlands by foot, bicycle, and sea kayak.

Sleep in a Lighthouse

The Corsewall Lighthouse, a boutique hotel and fine-dining restaurant situated an hour away from Bladnoch Distillery, offers views to the Isle of Arran, the Kintyre Peninsula, and the distant coast of Ireland.

With no airstrip, a flight landing on the beach at Barra makes for an exhilarating arrival in the Outer Hebrides. Access other islands by ferry to explore their remote distilleries.

The 400-foot long Royal Yacht Britannia is a floating former royal residence that offers tours of Queen Elizabeth II’s State Apartments and the royal bedroom. Conclude the day on the royal deck with a cup of tea, or maybe some Royal Salute.