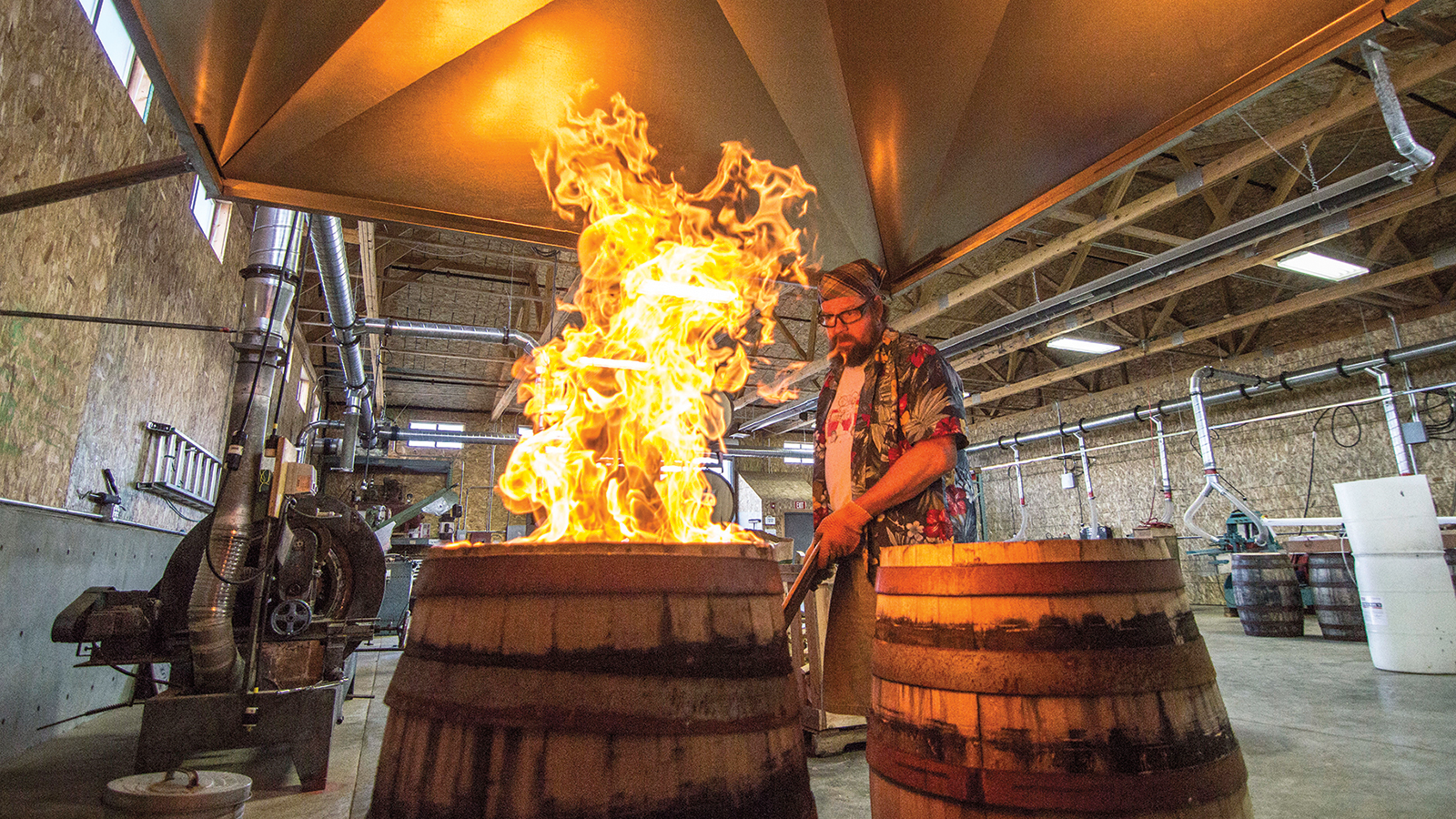 In the coming months, you’ll see many American whiskey labels donning the term “Oregon oak.” What is it?

Oregon oak is the popular name for a species of American white oak, Quercus garryana, that grows along the Pacific coast and is indigenous to British Columbia, Washington, and Oregon. It’s also commonly referred to as “Garry oak,” “post oak,” “Brewer’s oak,” and “shin oak.” But let’s face it, Oregon oak sounds better than shin oak.

The broadleaf hardwood was named in 1839 and offered little commercial value, according to 1920s U.S. Forest Service literature. The species was noted for making good barrel staves, which were likely used to make beer barrels in the region.

Oregon oak’s contemporary barrel rise began in the 1970s, when the U.S. Forest Service studied its wine barrel potential. In 1988, Oregon Oak Barrels burst onto the scene and began selling barrels to prominent U.S. winemakers. Since then, several coopers have offered Oregon oak, including Rogue Spirits-owned Rolling Thunder Barrel Works. However, the world’s largest cooperage—Independent Stave Company, which serves the majority of the Kentucky distillers—does not make Oregon oak barrels.

Independent Stave studied Oregon oak in the 1970s and concluded the company’s focus would remain on the white oak growing in the Ozarks and other U.S. forests.

Nonetheless, as American whiskey has grown, distillers have sought new ways to inject flavor into their products. Buffalo Trace distillery is currently experimenting with Oregon oak, but will not divulge how many barrels it has in stock. Eastside Distilling’s Barrel Hitch, Hood River Distillers’ Trail’s End, and single malts from Westland and Clear Creek distilleries are among the brands using Oregon oak in their barrel inventory.

Westland distiller Matthew Hofmann, who prefers calling it “Garry oak,” says the species produces the Seattle-based distillery’s “most important cask type.” Westland works with Salem, Oregon-based cooper reWine for its barrels and finds the species to be, “incredibly charismatic, you know it immediately when you taste it. The key indicators are molasses, dark toffee, coffee grounds, blackberry jam, wood smoke, and clove. It’s all very dark, spicy, rich, and complex,” Hofmann says.

Based on cooperage analysis, the barrels’ unique-to-Oregon oak flavors are different from those produced by typical American whiskey barrels. According to the McMinnville, Oregon-based Oregon Barrel Works, the species is comparable to French oak, with higher tannin levels than the common American white, Quercus alba, but its barrels are more prone to leakage if the wood is quartersawn instead of flatsawn.

Even with its barrel construction challenges, Oregon oak could lead to an entirely new style of American whiskey. A before-market tasting of Buffalo Trace Oregon Oak bourbon offers a nuanced spice that’s more intense than from the grains alone, and Westland’s single malts finished with Oregon oak have shown spices that range from coffee to pepper.

Since this species is relatively new to the whiskey barrel scene, coopers and distillers are expected to experiment with yard aging and toasting and charring times. Oregon oak could become American whiskey’s best production addition since small batching, or perhaps just another whiskey experiment with minimal mainstream impact. Only time will tell. ν