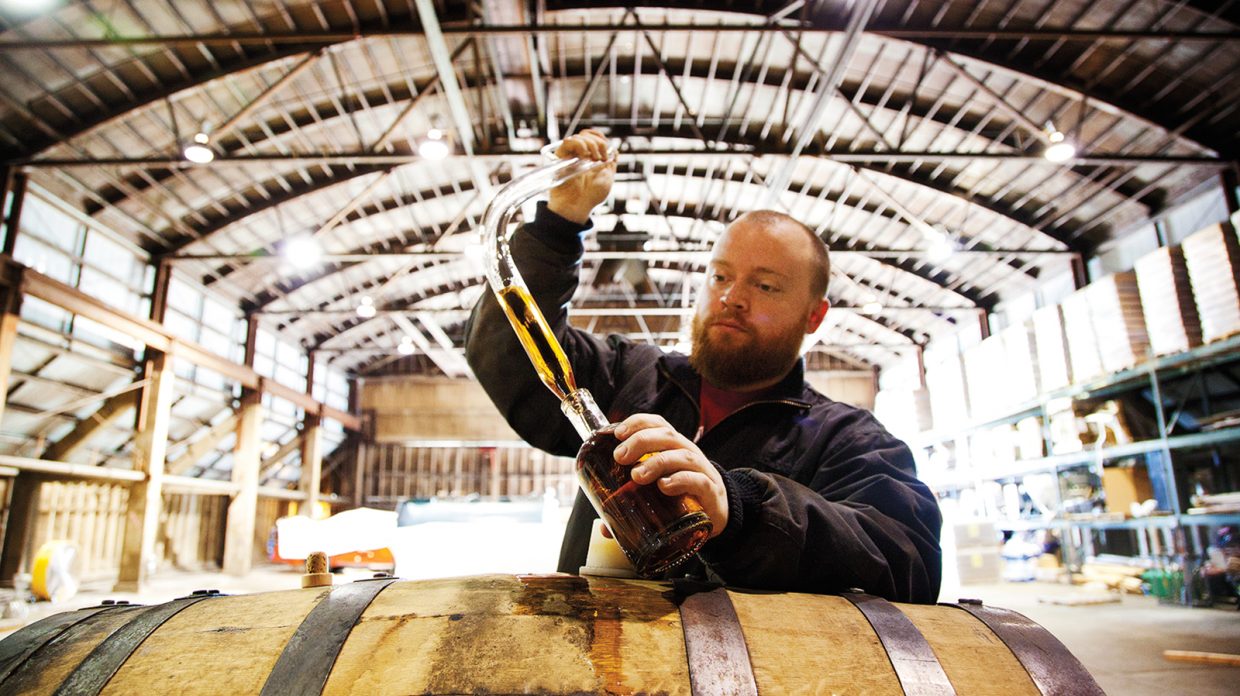 A dozen men come together, summoned from across the country with an important agenda to discuss. Each represents his own business interests, yet today, they’re here to join forces. This isn’t the infamous 1957 Apalachin mafia summit—it’s the 2016 American single malt summit.

Upward of two dozen distilleries across the U.S. are making American single malts, yet consumer confusion still reigns. “The challenge is that the category doesn’t exist,” explains Matt Hofmann, Westland distillery’s co-founder and master distiller. “There’s no shelf space for American single malt whisky.” That’s what spurred him on to set up this cohort of American malt producers with the goal of figuring out how best to brand and market the category.

“The market doesn’t really grasp it,” concurs Paul Hletko, FEW Spirit’s founder and distiller. FEW’s single malt has a mashbill including cherrywood-smoked malted barley and is aged in their used bourbon barrels. “It’s unfortunate that the market has come to equate the word single malt with scotch. I just don’t think that’s all that single malt has to offer,” he says. “Go to retail. Where does an American single malt go on the shelf? Does it go with the bourbon? Does it go with scotch? Does it go in a separate section? That probably means commercial death because nobody knows about it and nobody is looking for an American single malt section. It’s hard to get that going.”

Westland distillery produces a lineup of single malts including their flagship American Oak, along with Peated and Sherry Wood expressions and single cask releases. “American single malt whiskey is all that we make,” says Hofmann. He cites Stranahan’s and the new Virginia Distilling Company as others whose exclusive focus is single malts, as opposed to producers making single malts as part of a larger portfolio.

Another to include on that list is Tucson’s Hamilton Distillers, which produces a trio of single malts known as Del Bac, including two mesquite-smoked renditions. Smoky American single malts are also being made by Corsair, Ranger Creek, Santa Fe Spirits, and Copper Fox distilleries. Hamilton and Copper Fox each perform their own malting as well. As does Hillrock Estate distillery, whose malt house was the first purpose-built floor malting facility in the U.S. since Prohibition.

“The opportunity for American single malts is huge right now,” says Dave Smith, head distiller at St. George Spirits, one of the first to make an American single malt. Master distiller Lance Winters believes that only McCarthy’s from Clear Creek distillery and Peregrine Rock from Saint James Spirits preceded them. St. George single malt debuted in 2000 and is released in annual numbered editions. Lot 14 was named Whisky Advocate’s 2014 Craft Whiskey of the Year. St. George is laying down more stock while also creating new expressions. “We also have another whiskey release in the works, Baller single malt whiskey,” says Winters. “We think of it as a California spin on the Japanese take on Scotch whisky.”

That’s a convoluted series of attributions, but it shows the flexibility of American single malts. “The cultural rules haven’t really been written yet,” says Hofmann, freeing distillers to go in any direction.

“American single malt is going to develop in a very different context than scotch,” says Jared Himstedt, head distiller at Balcones Distilling in Waco, Texas. “Anybody, anywhere can do whatever they would like to do.” They bottle their “1” Texas single malt at a robust 53%, and while they produce multiple whiskeys, single malt was always the focus. “That was the whole drive when we started the company, to make single malt,” says Himstedt.

The U.S. also offers a massive range of geographic and climate influences, from Westland’s dank, rainy environs, to the scorching sun bearing down on Balcones, and the coastline at St. George. “The climate diversity here is much more than the relatively small area of Scotland,” says Hletko. “The things that make scotch such an interesting category, all of those factors apply just as much to the U.S. if not more so.”

Whether through the development of regional designations or another form of consumer education, expect to hear much more from American single malts.”I think there’s a certain energy in American single malts because we aren’t being told to do things a certain way,” says Hofmann. “We’re realizing that 2016 is the year…the year we organize ourselves and put all of our efforts together to get recognition for the category. It’s a pretty exciting time.”

Behind the scenes of your favorite local whiskey, coopers, maltsters, farmers, and other tradespeople are making key contributions.

Dalkita Architecture and Construction designs craft distilleries for the likes of Stranahan’s in Denver.