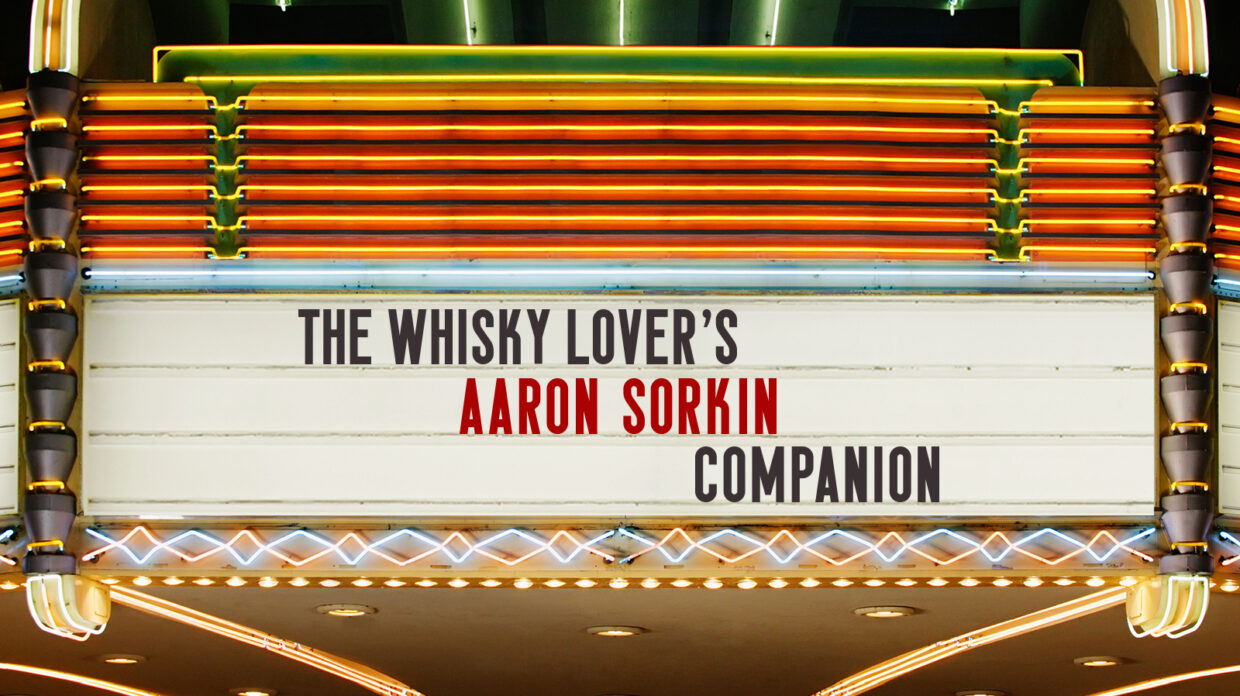 Watch a film that Aaron Sorkin wrote or directed and you’re likely to catch some snappy dialogue: political figures intensely discussing their next move or power players orchestrating a way to get ahead. Oftentimes, these back-room deals and strategy sessions are accompanied by whisky. Sorkin uses the drink to signify an agreement reached or to illustrate the corruptible nature of political systems.

Whether it’s lawyers drawing up a defense in “A Few Good Men,” or a CIA operative courting a congressman in “Charlie Wilson’s War,” for Sorkin, whisky is an essential part of the process. It is a tool used to bond and broker, or one used to signify status and the ways in which a person can climb the social ladder. In “Molly’s Game,” Molly (Jessica Chastain) establishes herself in the world of illicit poker, assembling a top-shelf bar for her high-roller clientele that includes Macallan 18 year old. In “The Social Network,” Eduardo (Andrew Garfield) hopes to gain entry into an exclusive collegiate club, drinking from a bottle of Shibblefield bourbon (a made-up brand though the script calls for Jack Daniel’s) as part of his initiation. In these settings, the rich and powerful drink whisky and anyone hoping to impress them needs to as well. 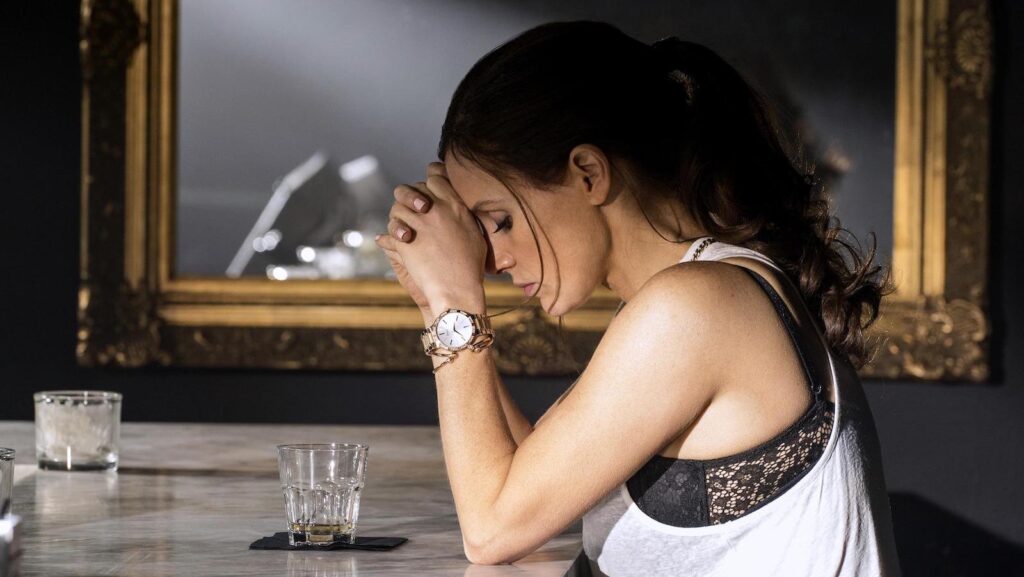 This can make Sorkin’s personal views on whisky hard to decipher. Like many of his characters, the drink isn’t portrayed as wholly good or evil. Eduardo’s upward mobility in “The Social Network” is a positive for him, but perceived as a slight to his friend, Mark (Jesse Eisenberg). In “A Few Good Men,” whisky represents a loss of innocence and resignation, but it also uncaps a sense of camaraderie and honesty. Sorkin’s characters are complex, and so is his representation of whisky.

Turning to television briefly, a world where Sorkin has found great success, we find a specifically whisky-rich monologue. In “The West Wing,” Chief of Staff Leo McGarry (John Spencer) describes his love of drinking, glamorizing the weight of a glass or the sound of ice splashing. He says, “Good scotch sits in a charcoal barrel for 12 years. Very good scotch gets smoked for 29 years. Johnnie Walker Blue is 60 year old scotch.” Sorkin certainly has something to say about the intoxicating nature of political power, even if the specifics on Blue Label here are not entirely accurate.

Extending whisky as a metaphor for politics even further, Sorkin seems to favor single malts over blends. In “Malice”, Ms. Kennsinger (Anne Bancroft) plays a shut-in who receives a bottle of Dalmore as a gift, “I drink crap,” she says. “Blended whisky is crap. I don’t care what color the label is.” That scene was shot in 1993, and today is a far too sweeping generalization—but Sorkin is telling us, via a character who articulates the truth to the film’s protagonist, that it is better to be or believe in one thing than to be a mixture of influences. His characters are often fighting for what they think to be true or right, taking on an establishment that frequently operates in morally grey areas. In Sorkin’s world, purity and piety are celebrated, whereas compromise can be seen as contamination.

Some have likened whisky to a hug, but for Sorkin, it’s more of a handshake. It’s a peace offering or a sign of a successful negotiation. It’s easy to think of Sorkin’s films and the many politicians, military figures, and business types who think and talk fast, but as they do, it’s often, and intentionally, with a whisky in hand. 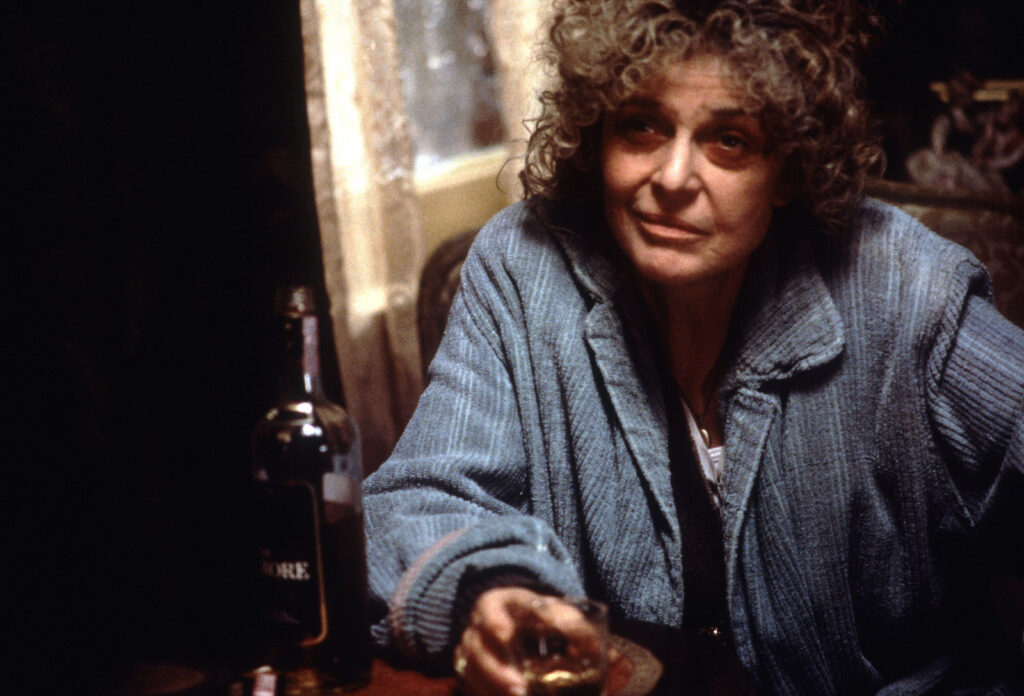 When Andy (Bill Pullman) visits Ms. Kessinger (Anne Bancroft) in “Malice,” he hopes to obtain information, so he brings a bottle of Dalmore with him. It is a Sorkin trademark that good whisky can open doors and seal deals. (Photo by AF archive/Alamy Stock Photo)

While President Andrew Shepard (Michael Douglas) is entertaining Sydney (Annette Benning) at the White House, his challenger Sen. Rumson (Richard Dreyfuss) is at a party, talking politics while smoking cigars and drinking whisky. They’re discussing Shepard and the upcoming election, Rumson saying that they can run an attack campaign now that Shepard is dating again following his wife’s passing.

We have two Sorkin whisky trademarks here. First, political figures strategizing over a whisky, and second, those plans being sinister in nature. In Sorkin’s films, whisky can signal villainy, as is the case here, where Rumson uses Shepard’s romantic vulnerability to gain political ground.

Early in the film, Attorney General Mitchell (John Doman) is talking to assistant federal prosecutor Richard Schultz (Joseph Gordon-Levitt) about the case and offers him some Johnnie Walker. Schultz declines, and the camera focuses on Mitchell’s whisky-filled glass.

Later in the film, Schultz stands with the defendants he’s meant to prosecute, doing what he feels is morally right. Looking back, the Johnnie Walker scene illustrates how Schultz isn’t like Mitchell. They may be on the same side of the case but they are motivated differently, as Schultz later demonstrates. This is Sorkin once more making whisky a character in a scene, and the fact that he again includes Johnnie Walker can’t possibly be a coincidence.

Feeling down about the case after learning of Markinson’s (J.T. Walsh) death, Lt. Daniel Kaffee (Tom Cruise) comes in from the rain and pulls a bottle of Jack Daniel’s from his coat. Lt. Cmdr. JoAnne Galloway (Demi Moore) asks if he’s drunk “Yeah. Pretty much,” he responds. Later in the scene, Kaffee offers Lt. Sam Weinberg (Kevin Pollak) a drink, and the two have a heartfelt conversation that restores Kaffee’s faith in the case. In the next scene, Sam says, “Look at this, last night he was swimming in Jack Daniel’s, and now he can leap tall buildings in a single bound.”

Whisky plays two roles here. First, it demonstrates how the naïve Kaffee is feeling defeated by the corrupt institution he’s attempting to take down. Up to this point in the film, he’s mostly shown drinking YooHoo. The turn to Tennessee whiskey then coincides with the harsh reality that his good faith efforts aren’t going to be enough to obtain justice for his clients. However, he and Sam bond over the bottle, and Kaffee has a breakthrough with the case. Whisky can signify a bout of darkness, but it’s also a tool for collaboration, as Kaffee’s morale and the case turn around after his rough night.

Cocky surgeon Jed (Alec Baldwin) says that he is “impervious to alcohol” and orders a round for two women who ask for bourbon. “Bourbon it is,” he says. That scene comes into play later when Jed is called into surgery and makes a medical mistake. “Ask God how many shots of bourbon he had before he cut me open,” Tracy (Nicole Kidman) says.

Andy (Bill Pullman), beginning to suspect he’s being conned, goes to visit Tracy’s mother. “Scotch,” his lawyer says. “Bring her a bottle of scotch.” He does, delivering a bottle of Dalmore which she greatly appreciates. “This is single malt scotch,” she says. “That was so classy, mister. I haven’t had single malt since ’69.” She tells Andy what he wants to know but says as he’s leaving, “But do me a favor. Leave me the scotch.” Toward the end of the film, Andy is talking with a cop who says he needs ice for his wounds. “Fine I’ll have mine in a glass with some scotch,” he says. “Single malt, nothing blended.”

Andy and Ms. Kennsinger aren’t politicians or lawyers, but they reach an agreement over whisky all the same. Without the bottle of Dalmore, it’s unlikely that Andy breaks through to his reclusive mother-in-law, who gives him an education on both whisky and her daughter’s true nature. Her disparaging remarks on blended whisky aside, it’s a turning point in the film and a testament to the power of sharing a dram. There’s plenty more drinking in this film, but no whisky scene is as potent or pivotal. 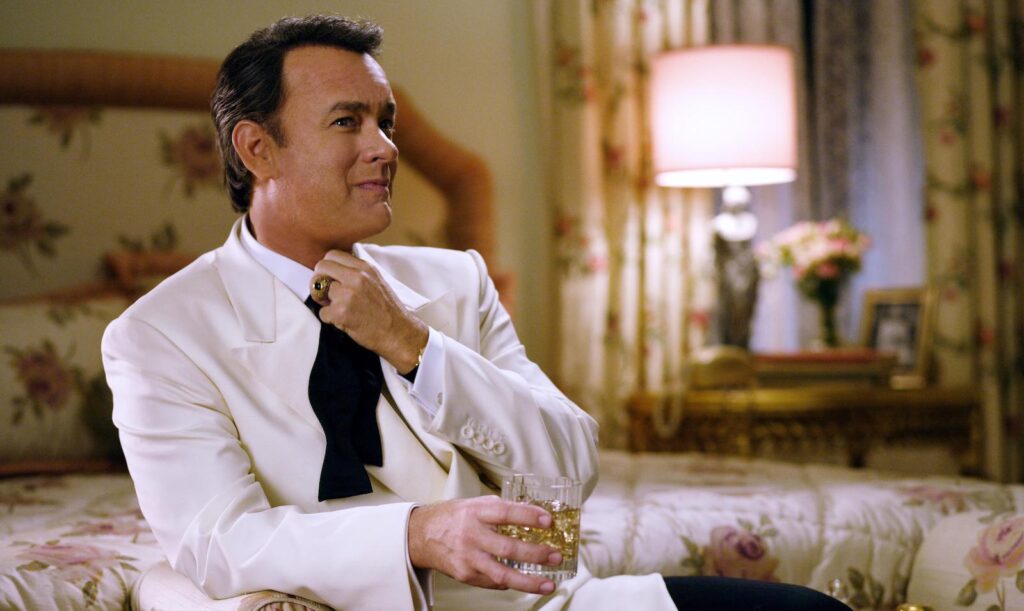 Whisky is shown throughout “Charlie Wilson’s War,” as the Texas representative’s taste for it symbolizes his deal making and rebellious persona. (Photo by Allstar Picture Library Ltd./Alamy Stock Photo)

Texas Representative Charlie Wilson (Tom Hanks) loves whisky and drinks it throughout the film including the very first scene where he pours an old drink into a new one. In D.C., he learns of a peculiar assignment. “Well if anyone asks what the hell I’m doing on the ethics committee we’ll just tell them I like chasing women and drinking whisky and the Speaker felt we were underrepresented,” he says. In his office, he sips scotch from a coffee mug. “I love Chivas,” his secretary says while pouring.

When visiting Pakistan, he’s asked if he’d like a drink. “I’d love a glass of ice and any kind of whisky. Rye. Canadian,” he says. Everyone looks at him confused and he drinks a whisky on the flight home.

In D.C. once more, he’s visited by CIA operative Gust Avrakotos (Philip Seymour Hoffman) who has a bottle of Talisker 12 year old with him. “We wanted to give you this ‘cause we know you like single malt,” he says, going on to quote the Robert Louis Stevenson poem “The Scotsman’s Return From Abroad.” “The King of drinks as I conceive it. Talisker, Islay, or Glenlivet.” Gust later reveals the bottle of scotch is bugged. “Will you take the bug off my scotch bottle now?” Wilson says before the two open it and share a glass.

Like Andy in “Malice,” Gust uses a bottle of single malt to gain entry and information. That he is deceptive about his intentions is consistent with Sorkin’s portrayal of whisky and the people who drink it. After all, it is a crucial part of his scheme to get where and what he wants. Rep. Wilson meanwhile is not quite the villain some of Sorkin’s other whisky drinkers are made out to be, but he is shown as amenable, open to influence and deal making. It is his personable nature and ability to bargain that ultimately saves the day and so as a Sorkin character, the whisky fits. He may gain more of a moral compass through the course of the film, but his love of whisky never waivers.

Whisky Pops Up Throughout Noah Baumbach’s Films As Well. See How the Director Uses a Dram