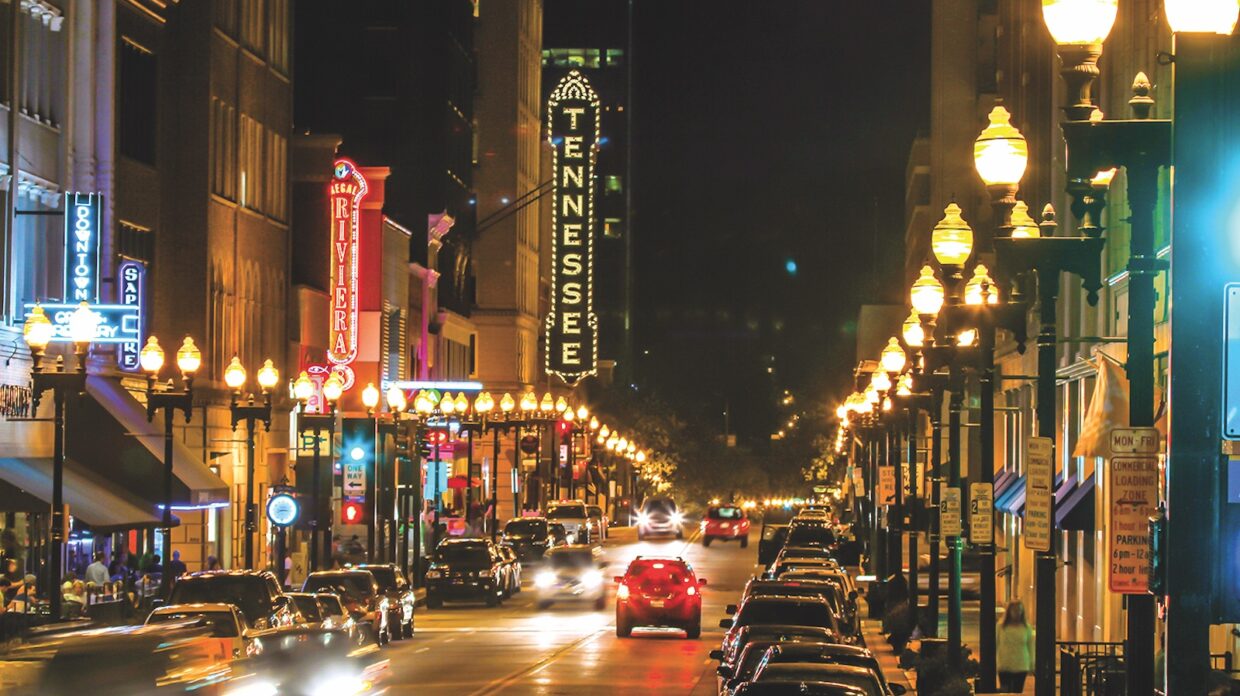 Knoxville's Gay Street lights up at night, with a bounty of restaurants and bars to visit. (Photo by Scripps Networks Interactive)

Once known as Marble City for the pink stone used to build the Lincoln Memorial, Grand Central Station, and New York Public Library’s famous brace of stone lions, Knoxville has seen recognition as the Cradle of Country Music, the first Capital of Tennessee, and the Gateway to the South. It is also a growing whisky destination.

While travel and entertainment as we once knew have changed due to the pandemic, we’re looking forward to the days of resuming such activities. Thus, we share with you this guide to Knoxville while being mindful that distilleries, attractions, restaurants, and bars may have limited services and/or hours in order to comply with local mandates and social distancing. Whether for future planning or some armchair travel, join us as we tour the third most-populated city in Tennessee.

Consisting of Market Square, the Old City, and several in-town neighborhoods, few cities can offer a concentrated collection of walkable pleasures to rival downtown Knoxville. Drink, food, shopping, and entertainment are easily accessed on foot or by bicycle. A quick trolley or pedal across the Tennessee River unlocks even more—SoKno showcases craft brewers, fine dining, and outdoor activities. Of course, within 45 minutes you can find yourself deep in the forests of Great Smoky Mountains National Park, the most-visited national park in the country, or spending a weekend in luxury at Blackberry Farm resort, recipient of the Wine Spectator Grand Award. If Knoxville isn’t already on your travel list, it’s time to take a tour. 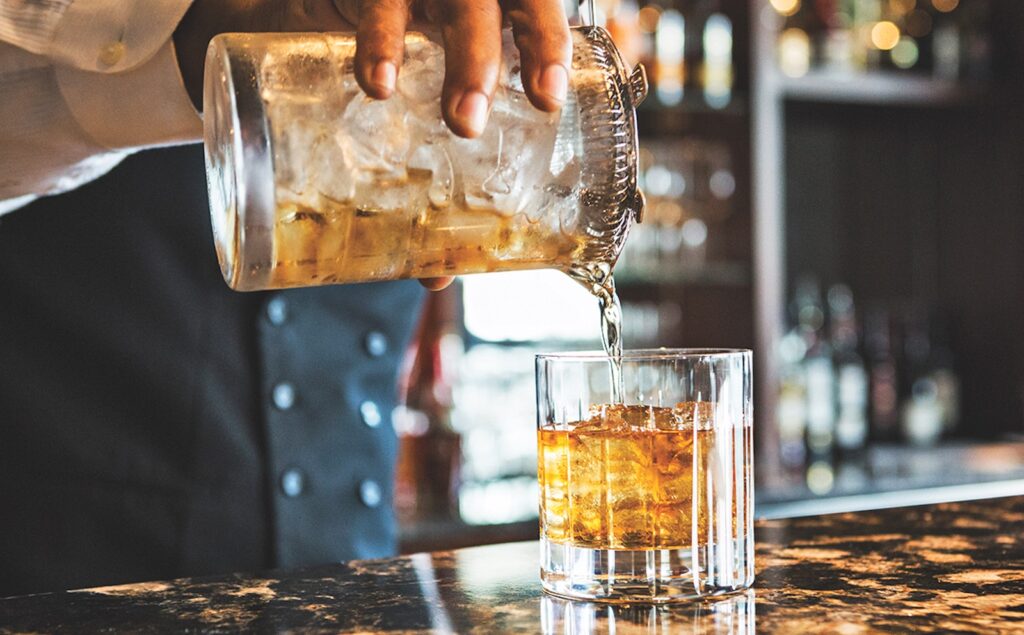 Grab a drink and a good night’s rest at The Tennessean Hotel. (Photo by Denise Retallack)

Among the top chain hotels offering accommodations downtown are Hyatt Place, in the former Farragut Hotel, and Embassy Suites, in the former Regions Bank building. Both are recently renovated and boast rooftop bars for cocktails paired with 360-degree views of the city and Smoky Mountains. Right on Market Square, the historic Oliver Hotel, erected in 1876 as a bakery and ice cream parlor, has hosted authors, musicians, and movie stars and appeals to budget-conscious fans of boutique hotels. Just a few blocks west, The Tennessean Hotel offers luxury overlooking World’s Fair Park and the University of Tennessee.

Knoxville may be known as the cradle of country music, but its many festivals don’t discriminate; from the Rossini Opera Festival to the experimental music Big Ears Festival, all musical tastes are served. Other events include the Dogwood Arts Festival and many multicultural gatherings, like Knox Asian Festival and HoLa Festival.

You’ve got a lot to do today, so start with an early breakfast at OliBea in the Old City. Its brunch specialties bring home-cooked flavor to a naturally lit dining area decorated with local art. Try the Geechie Boy Farm Burrito: braised collards, rice, white sweet potatoes, Sea Island red peas, cashew queso, and Oaxaca mole. For a quicker alternative, grab coffee and a house-made pastry at Old City Java, just a few doors away. The city’s best coffee results from the nerd-level obsession of the owners, like adjusting the water to each type of coffee bean. Their Wild Love Bakehouse supplies delectable carbs to counter the caffeine.

Time to get active and burn off that pastry! Head south over the river and find Ijams Nature Center. This one-time home to a family of ornithologists and gardeners is the heart of Knoxville’s Urban Wilderness, which connects more than 50 miles of trails and greenways with rivers, historic sites, dramatic quarries, adventure playgrounds, five parks, and a 500-acre wildlife area. The Nature Center provides weekly programs for all ages, including wildflower hikes, bat nights, and the annual Meadowlark Music Festival.

For serious bikers, nearby Baker Creek Preserve is the heart of an 11-mile single-track biking loop with an additional 30 miles of connected trails. Highlights include professional-level downhill trails and one of the state’s largest pump tracks and skills parks for skateboard and BMX bike enthusiasts.

While you’re across the river, chow down on the porch at SoKno Taco Cantina or head to the Old Sevier neighborhood for a SoKno bar crawl. Craft brewers Printshop and Alliance provide the drinks—several options aged in local whiskey barrels—while Landing House fuses culinary traditions from China, Cambodia, France, and the U.S., making their pork rinds an absolute must. For quicker fare, check out what food trucks are parked at South Side Garage (full bar inside the old service station) or grab a pizza at South Coast Pizza (local and craft beers available).

Head back over the river into downtown, to Gay Street, to take in a movie at the Regal Riviera. It sits on the site of the Riviera Theatre, opened in 1920, and is now Regal Cinema’s flagship in-town cinema; you passed the international headquarters on your way back into town from SoKno. If you feel up for inertial sports, opt for Maple Hall, a luxury bowling alley with a full bar and leather couches or Craft Axe Throwing, just north of the Old City. 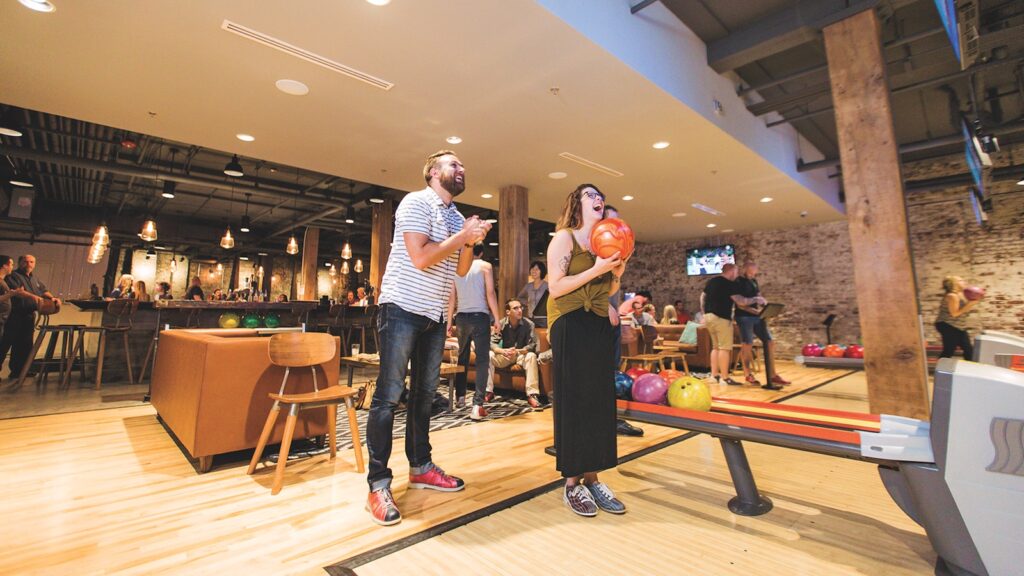 Maple Hall offers a full bar alongside some bowling fun.

For a music-filled afternoon, pick up a guide to the Cradle of Country Music Walking Tour from the Knoxville Visitors Center, which hosts live music broadcasts on WDVX, while the tour includes highlights like Hank Williams’s last stop, the stomping grounds of the Everly Brothers, and the career launches of Roy Acuff, Chet Atkins, Elvis Presley, and Dolly Parton.

When you’re ready to refuel, start with pre-dinner drinks at the Peter Kern Library. Accessed via the alley behind the Oliver Hotel, all the cocktails are named after famous literary characters, like the Friar Lawrence (Rittenhouse rye, Cynar, Fernet-Branca, honey syrup, and Angostura bitters) and The Hound (Averna, Laphroaig 10 year old, Carpano Antica Formula vermouth, celery, sea salt, and habañero shrub).

Market Square offers a multitude of options for dinner, all lining a one-acre pedestrian mall. The 275-plus whisky selection makes Stock & Barrel a must-see. The whisky list features around 50 limited-edition bourbons, like WhistlePig Boss Hog V ($120) and Four Roses 130th Anniversary ($45). The menu of local pasture-raised burgers includes creations like The Elvis—topped with bacon, bananas, and peanut butter. For more high-end fare, Oliver Royale is a classic French bistro with a penchant for American whiskey. The list of around 120 bourbons and ryes includes gems like Booker’s 30th anniversary ($50) and a full-proof house selection of Weller ($20). For local flavor, seek out the farm-to-table Appalachian fare of chef Matt Gallaher at Knox Mason or visit J. C. Holdway, where James Beard Award-winning chef Joseph Lenn offers Southern-inspired dishes like cornbread served in a cast-iron skillet with sorghum butter, suitable anytime from appetizer through dessert. On most menus, you’re likely to find local favorites like Benton’s bacon and Cruze Farm buttermilk.

While it’s not quite whisky, Suttree’s High Gravity Tavern specializes in potent beers that come very close across their 32 taps. Grab a pint, or maybe a half, and hop next door to Harrogate’s Lounge barcade to drop a few quarters in classic pinball games and stand-up arcade favorites. It’s also worth checking the nightly lineup at the Tennessee Theatre and the Bijou Theatre, intimate locations where you might stumble on a top act. After the show, Clancy’s Tavern and Whiskey House offers a nightcap from their broad selection of Irish whiskey, from 2 Gingers ($6) to Redbreast 21 year old ($70).

Open from May to November on Wednesdays and Saturdays, the Market Square Farmers Market is prime hunting grounds for breakfast. Local coffee shops and food trucks provide made-to-order seasonal delicacies. Market Square was donated to the city in 1854 with the stipulation that a public market always be available in the space.

Once you’re fortified, spend the day wandering the many shops around Market Square and the Old City. Union Ave Books boasts signed copies from numerous authors who have done in-store readings. Mast General Store is a step back in time, with candy barrels and cast iron on the first floor, and a full-service outdoor gear shop in the basement. A cocktail shaker made from a Ball jar may make the perfect souvenir. 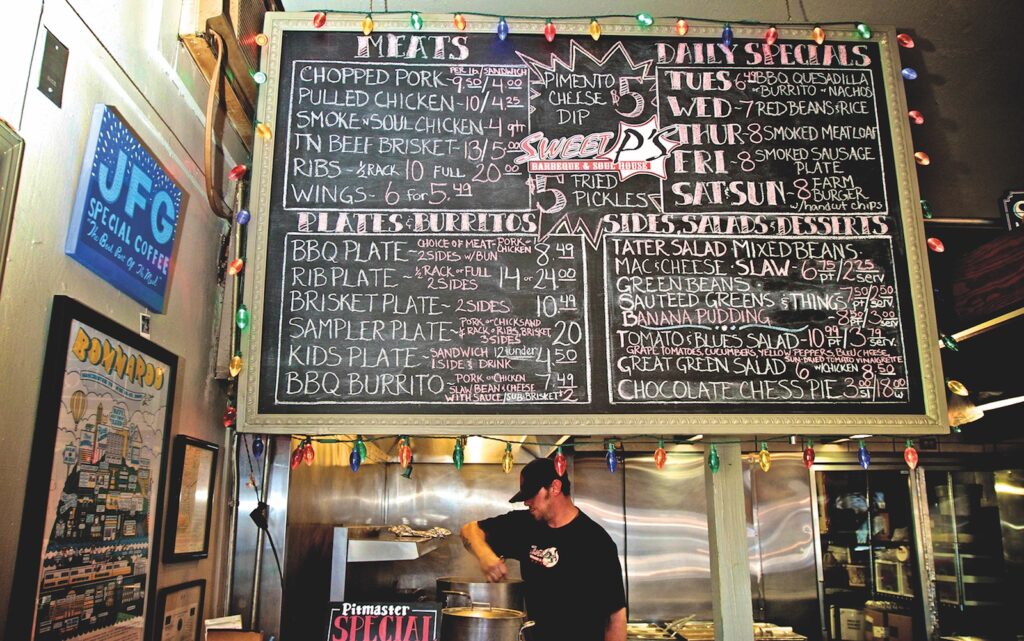 Sweet P’s serves the best barbecue in town, a perfect way to prepare for an evening of whisky drinking. (Photo by Photographfee)

Grab a lunch of well-crafted sandwiches, salads, and pizzas at local longtime favorite Tomato Head. The best barbecue in town is at Sweet P’s. Combine a daily special like BBQ nachos (Tuesdays) or smoked meatloaf (Thursdays) with a post-lunch distillery tour at Knox Whiskey Works, just up the street.

Remember the Rubik’s Cube? You can reminisce over the puzzle, along with Cherry Coke and the first touch screen displays, at World’s Fair Park, where these and other ’80s inventions debuted in 1982. A quick trip to the top of the landmark Sunsphere offers superb panoramic views of downtown and the University of Tennessee, backed by the Smokies. Just on the other side of the park is the Knoxville Museum of Art, home to a growing collection of art and memorabilia from world-renowned and locally born Beauford Delaney.

Beer lovers are well served by local craft brewers Pretentious Beer Co. and Crafty Bastard Brewery. The glassware and tap handles at Pretentious hail from the Pretentious Glass Company right next door, where you watch artisan glass blowers at work; you can even blow your own whisky glass. Both offer outdoor seating, and Crafty puts you at the north end of Gay Street in Emory Square, beneath the spreading trees of Gothic churches.

For dinner, you’re in for a treat of progressive delights in the Old City. Start with pre-dinner drinks at PostModern Spirits. Tennessee state law allows on-premise drinks service at distilleries as long as everything behind the bar is made by the distiller; the bar at PostModern offers a range of gins, whiskeys, and liqueurs combined with house-made bitters and mixers. Its single malts often involve collaborations with local brewers, and the cocktail menu changes with the season. The namesake PostModern Cocktail includes its single malt, its elderberry gin liqueur, lemon juice, honey syrup, and a rinse of its Amaro Artemisia. 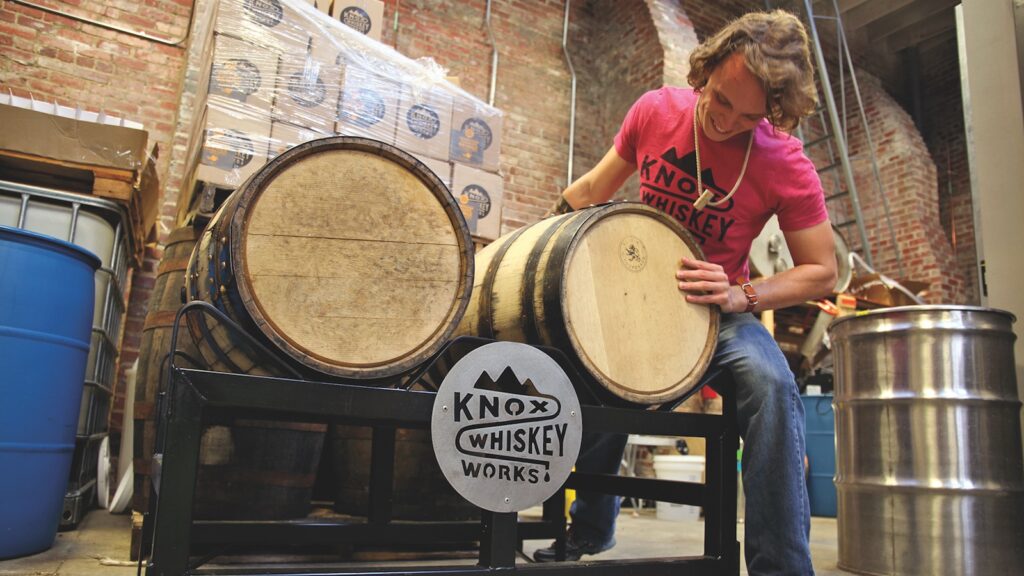 Take a tour of Knox Whiskey Works and sample the bourbon and heirloom corn white whiskey.

Dinner calls, and a one-block walk brings you to Lonesome Dove Western Bistro, housed in the historic Jack Sullivan building, rumored to include hidden tunnels and Prohibition-era hiding spots. Celebrity chef Tim Love serves up tasty treats like elk foie gras sliders and antelope short ribs; pair the meat with The Willie (Bulleit rye, sweet vermouth, Angostura bitters, and a Luxardo maraschino cherry smoked with oak chips). While excellent desserts and after-dinner drinks entice you to linger, you have an important appointment just across the street.

Looking like a simple corner pub, nothing about the exterior of Boyd’s Jig and Reel can prepare you for the bounty of whisky inside. The official count, kept on a chalkboard behind the bar, is 950 bottles, including Scotch Malt Whisky Society bottlings. Every budget is served here by numerous independent bottlings that offer reasonably priced once-in-a-cask drams, while high-end offerings like The Last Drop 50 year old, Ladyburn 42 year old, or Port Ellen 34 year old top the old and rare collection. Take a vertical flight of Glenfarclas that ascends from the 10 year old to 40 year old with four stops in between, or choose from 15 Springbanks from 10 to 25 years old. Enjoy your drams and start up a conversation with a local; like a good whisky, Knoxvillians are vibrant and friendly. 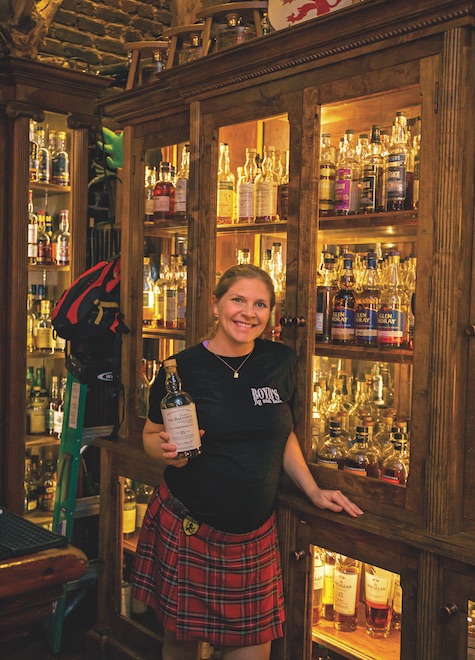