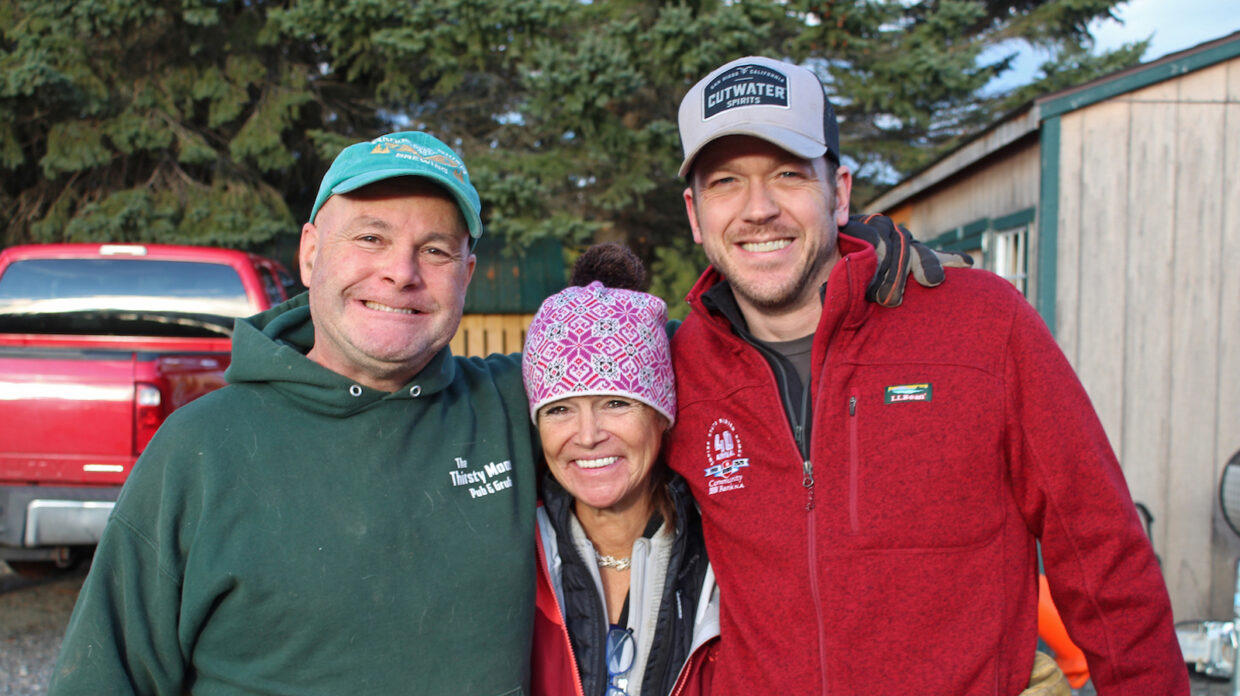 Tim Robinson (right, with property owners Virgie Rodgers and DJ O'Neill) joined #TasteWithSpace on Nov. 20 to talk about his quest for a hidden case of Canadian Club. (Photo by Photo by Naj Wikoff/Lake Placid News)

Tim Robinson spends his days surrounded by whisky as the owner of Terry Robards Wine & Spirits in Lake Placid, New York. But when he heard about a case of Canadian Club that had been hidden untouched for over 40 years, he had to go search it out. “There’s a lot of ifs,” he said of the hunt to find the whisky, which has now stretched over several days of digging. “It’s like putting Xes everywhere and narrowing it down.” Robinson joined Whisky Advocate’s #TasteWithSpace Instagram Live series on Nov. 20, following up on a previously published article detailing his efforts to uncover the location of the whisky decades after it was buried as part of an ad campaign.

During the conversation, which took place on the property where the whisky is most likely buried, Robinson gave a tour of the areas he and his collaborators had already dug up. The quixotic quest has thus far yielded nothing more than plexiglass—the site’s previous owner was a plexiglass dealer—but Robinson remains optimistic. He pointed out that the topography has changed over the years, with trees and root systems possibly entangling the case, and noted that it could even have sunk into the swampy ground.

“I don’t think this story is completely done,” he said, noting that the next step is to use ground-penetrating radar. “I’m definitely determined to try to find a little more. It’s been haunting me every night. I had a dream the other night that it was right there in front of the driveway.” Even if Robinson doesn’t find the whiskey, he said the effort wouldn’t be a waste as it’s brought together so many people from the community. “My takeaway from this whole thing is it’s just been awesome. … Seeing a lot of people that remember this from the ’80s and the Olympics, when they happened here,” he said.

Since Robinson owns a liquor store, the interview presented a great opportunity to talk about allocations, pricing, and other questions that vex many whisky lovers. He offered frank information on how he handles the Buffalo Trace Antique Collection (BTAC). “The allocations are like a game,” he said. “You’ve got to do a certain amount of business with a certain distributor to get in their favor, in a sense. … Whenever the BTAC comes around, they look at who does the volume in brown spirits and they send the allocations accordingly. It’s very unpredictable; we have no idea when it’s coming. … It’s usually very limited.”

Robinson said he’s taken offers of $2,000 for whiskeys like Pappy Van Winkle Family Reserve 23 year old (“How do you turn that down?”), but that Blanton’s—the bottle people request most often—goes to his best customers at the standard retail price of $65. “I have a list that I rotate through,” he said, explaining that people who patronize the business regularly get the call when he has something special available. “If there’s any word of advice [for finding rare whiskeys] it’s relationship. … Bourbon karma is very real.”

Robinson took several viewer questions and offered even more insight into the decision-making process for pricing in-demand whiskeys. Check out the full interview on IGTV, and follow Whisky Advocate to be notified of all our Friday afternoon #TasteWithSpace sessions. Tune in for the next episode on Dec. 4, when the Whisky Advocate editorial team will discuss this year’s Top 20 list and take questions about the whiskies. The countdown to Whisky of the Year starts Nov. 30.