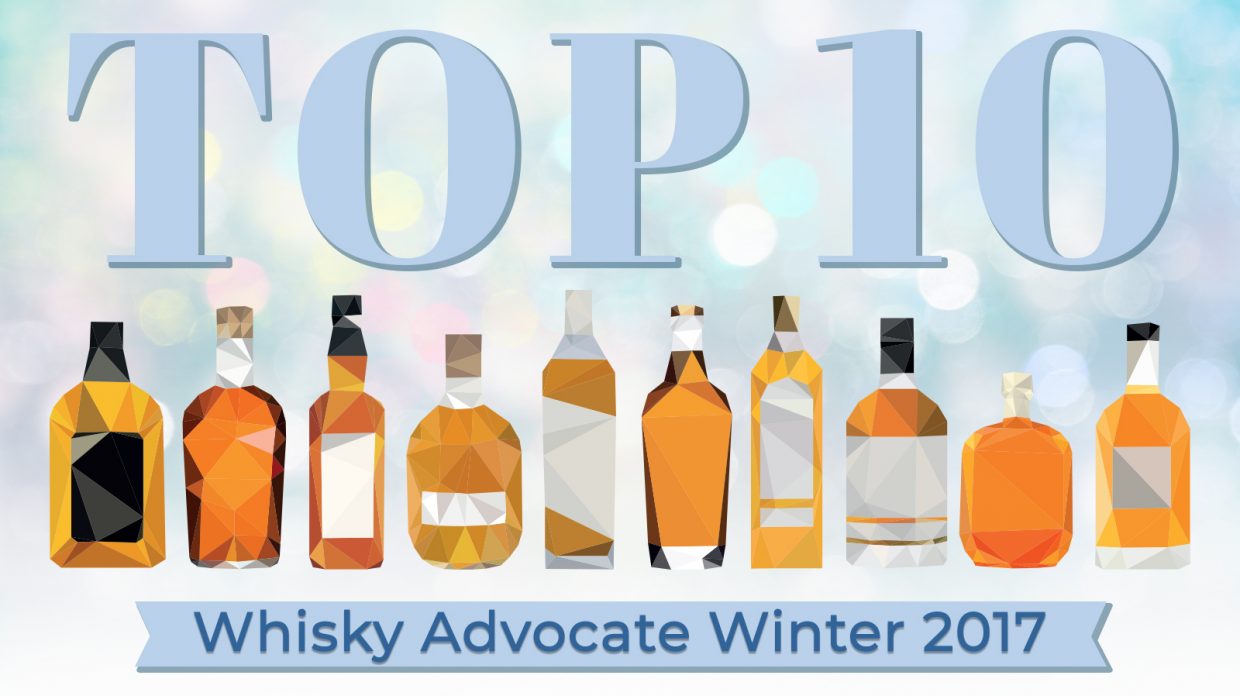 Crank the thermostat down a notch or two as the whiskies reviewed in the Winter 2017 issue are sure to keep you warm and cozy. Hitting newsstands on December 5th, the issue’s buying guide features a number of whiskies that soar well above the 90-point threshold. (The Winter issue also highlights the full Top 20 whiskies of 2017.) Special releases from Four Roses, Diageo, and Buffalo Trace, along with award-winning Ardbeg and Glenmorangie, single cask Irish whiskey, and a rare Amrut, all register as excellent end of year gift choices—particularly for yourself.

This is an ode to this bourbon’s old-school style that, post-caramel and cinnamon, is balanced with dried blueberries, sweet cornbread, nutmeg, saffron, citrus, and slight hints of chipotle, ginger, and clove. Under the beautiful spice come vanilla cake batter, almond butter, and salt water taffy that walk it to a finish that just doesn’t quit. It’s the vanilla-forward finish that makes this an upper-echelon whiskey. (13,800 bottles for the U.S.) —Fred Minnick

This 1979 vintage is the 17th Special Releases Port Ellen. It has been aged in refill American oak hogsheads and butts. The nose offers fresh-mown grass, ripe pears, and damp tweed, before smoked fish and bonfire aromas emerge. The oily palate features spicy peat, barbecued meat, and peaches in syrup. Very long in the finish; smoky and earthy, with a hint of chili and mouth-drying tannins. (2,988 bottles) —Gavin Smith

Distilled in 1982, this expression was matured in refill American oak hogsheads. It is the 16th Brora in the Special Releases series. Ripe pears and vanilla on the nose; progressively more perfumed, with developing toffee notes. Slightly waxy on the palate, with fresh-squeezed lemon and sweet background smoke contrasting with spicy dark berries. Plain chocolate, sultanas, and raisins in the medium-length finish. A relatively restrained Brora. (3,000 bottles) —Gavin Smith

This gorgeous whiskey has taken on a lot of sherry character from the refill sherry hogshead: cherry, prune, chocolate orange, baked pineapple chunks, and toasted spice. A good weighty structure boasting deep citrus intensity, with ginger and pepper snapping at its heels; a sensation only intensified with water. Lush fruits, butterscotch, and milk chocolate, with a finish of lively spices, stone fruits, and zesty orange muffins. (276 bottles) —Jonny McCormick

Caramel. Caramel. Caramel. It comes early and remains to the finish. In between this caramel sandwich, it’s nutmeg, cinnamon, jasmine, rose petals, baked apples, fudge, pecan pie, peanut brittle, and roasted peanuts. Over a mouth-coating palate, its complexity tingles and every note plays just under the rich and layered caramel that presents itself as a chew on the extremely long finish. This is a must-have sipper. —Fred Minnick

The first bottling of Astar was released in 2008. The 2017 release was matured in casks made of oak from Missouri’s Ozark Mountains. The nose is floral, with rosehips, orange blossom, and milk chocolate-coated Turkish delight. Honey and citrus notes follow. Voluptuous on the palate; sweet, even sugary fresh fruit notes, plus vanilla, cinnamon, and cloves. Drying from coconut to plain chocolate in the lengthy finish. Extremely accomplished. (Scored by Top 20 tasting panel; individual reviewer rating: 93) —Gavin Smith

This is a work of art. It begins by revealing vanilla, from custard to cake icing. Then it speaks caramel with a dark chew, crème brûlée, and Werther’s Original hard candy. From here, complexity takes over, with candied popcorn, butterscotch, chocolate ganache, French toast, maple, honey, pumpkin pie, fried pie dough, blueberries, and cinnamon, with hints of molasses and pecan. The long finish seems to offer a concentration of all the flavors. Delicious. —Fred Minnick

These barrel proof bourbons and Canadian rye whiskies will stand up to any amount of ice or water you throw at them.

Coming from India, China, Wales, and beyond, these worldly whiskies encourage a more far-reaching exploration of single malts.

These 15 year old bourbons from Barrell, Widow Jane, and more, show that good things come to those who wait.