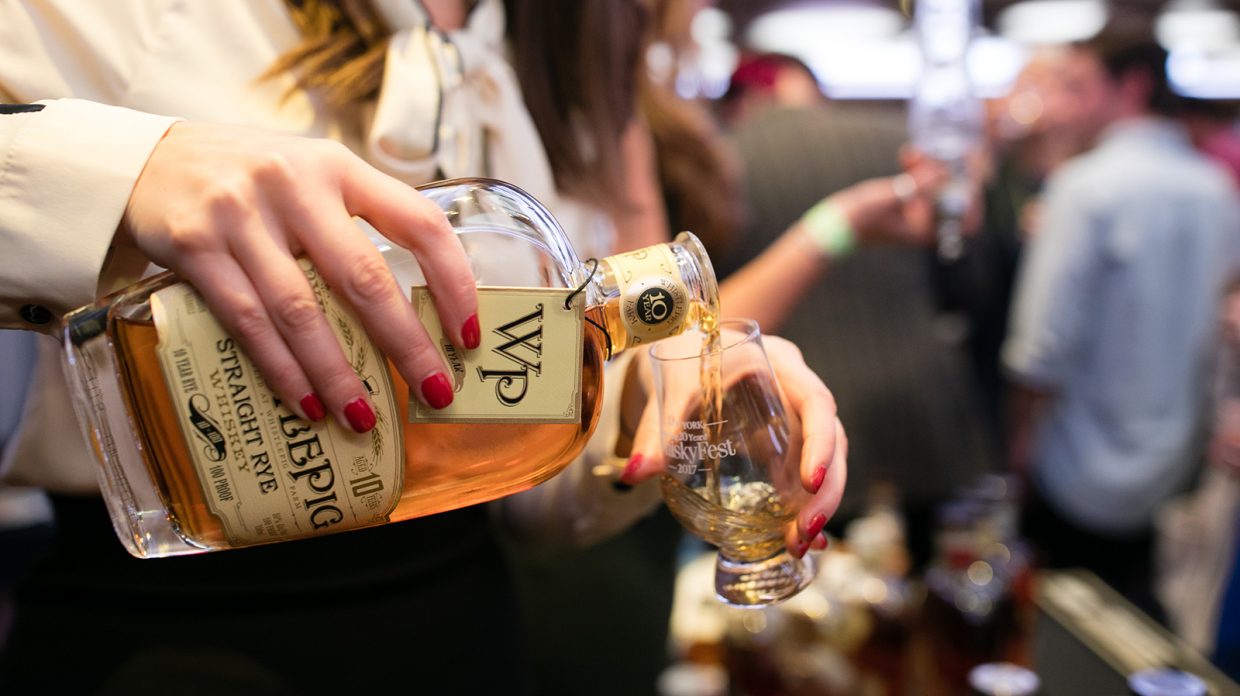 Vermont's WhistlePig will be one of the main craft attractions at WhiskyFest Chicago.

On March 23rd, whiskey lovers of the Midwest will convene for WhiskyFest Chicago, the first WhiskyFest event of 2018. As always, hundreds of whiskies will be available at the event, and attendees can range freely between scotch, bourbon, Japanese whiskies, and many other whiskey styles—including the big tent of American craft whiskey. As craft whiskey has matured, small producers can now stand toe-to-toe with much more established distilleries. A number of craft distilleries from all around the country will be pouring at WhiskyFest Chicago, so you can sample the wide variety of styles now being made. Here are some of our top picks.

Also, be sure to check out the full list of pours and the lineup of free seminars. And read our tips for navigating WhiskyFest like a pro. If you don’t have your tickets yet, it’s not too late!

Kentucky Peerless
Craft whiskey is made all over the country, and that includes traditional whiskey-making states like Kentucky. In fact, Louisville-based Kentucky Peerless Distilling Company made the only non-sourced craft whiskey on Whisky Advocate’s Top 20 Whiskies of the Year list in 2017—and they’ll be pouring that whiskey, Peerless Straight Rye, at WhiskyFest. VIP ticket holders can also try three different single barrel versions of the rye.

Old Elk Bourbon
Greg Metze retired a few years ago from his long-time role as master distiller at Indiana’s renowned MGP Distillery, but he couldn’t stay still for long: Metze will be at WhiskyFest pouring his latest project, Old Elk Bourbon from Old Elk Distillery in Colorado. The bourbon is a combination of whiskeys from Kentucky, Colorado, and Indiana and showcases the art of blending. Metze is also hosting a seminar on the blending and proofing techniques used in Old Elk at 8:30 p.m. in the Columbus I/J Room.

Cedar Ridge Bourbon
Iowa grows more corn than anywhere else in the country. Cedar Ridge, the state’s first distillery, was founded to turn some of that corn into bourbon. Cedar Ridge Iowa Bourbon is a light and airy whiskey with intriguing tropical fruit notes, and clearly shows that mature craft bourbon can be quite different from traditional Kentucky-style bourbon. The distillery will also be pouring its Single Malt, Malted Rye, and Wheat whiskeys.

Hudson Maple Cask Rye
Tuthilltown Spirits’ Hudson brand (now owned by William Grant & Sons, parent company of scotches like Balvenie and Glenfiddich) was one of the first craft whiskeys to gain a large following, and the distillery helped champion New York’s farm distilling law that has inspired dozens of other distilleries in the state. Hudson will be pouring a wide array of whiskeys at WhiskyFest, but be sure to try the Maple Cask Rye, which is finished in ex-Hudson barrels that were then used to age Vermont maple syrup. The maple sweetness adds a distinctly Northeastern touch to the spicy rye whiskey.

Driftless Glen
Wisconsin-based Driftless Glen has been quietly laying down thousands of barrels of bourbon and rye for years, and their whiskey has finally started coming onto the market in limited quantities. Driftless Glen will be pouring Single Barrel Cask Strength Rye and Single Barrel Bourbon, as well as several other selections, at WhiskyFest. Take the opportunity to get a taste first taste of what the climate of the Driftless Area, a rugged part of the upper Midwest, can do for whiskey.

Stranahan’s
Once virtually unknown, American single malt whiskey has come into its own over the last few years, and Stranahan’s has played a major role in the development of the style. Be sure to try Stranahan’s Original, which scored an 88 in Whisky Advocate’s Fall 2017 Buying Guide—one of the highest scores given to a craft whiskey in 2017. VIPs can also try Snowflake, which is normally released only one day a year, and only at the distillery. It may just make you want to head to Denver in December to try to score your own bottle!

WhistlePig
Vermont-based WhistlePig sources and blends some of the highest-quality ryes of the United States and Canada, and they’ll be pouring both their 10 year old and 12 year old at WhiskyFest. But the company has also been making whiskey at the bucolic WhistlePig Farm for years. Try WhistlePig FarmStock, a blend of sourced whiskey and the distillery’s own Vermont rye, to see how the project is coming along.

High West
Although High West does distill, the Utah company has made a name for itself as a blending house that plays with top-quality sourced whiskey in interesting ways. Double Rye!—a blend of 2-year-old and 16-year-old rye whiskies—and Rendezvous Rye, made from ryes ranging from 5 to 19 years old, will both be on offer at WhiskyFest. If you’ve got a VIP ticket, be sure to try Yippee Ki-Yay or the cult favorite A Midwinter Night’s Dram, which both use wine barrel finishing to further accentuate spicy rye flavors.