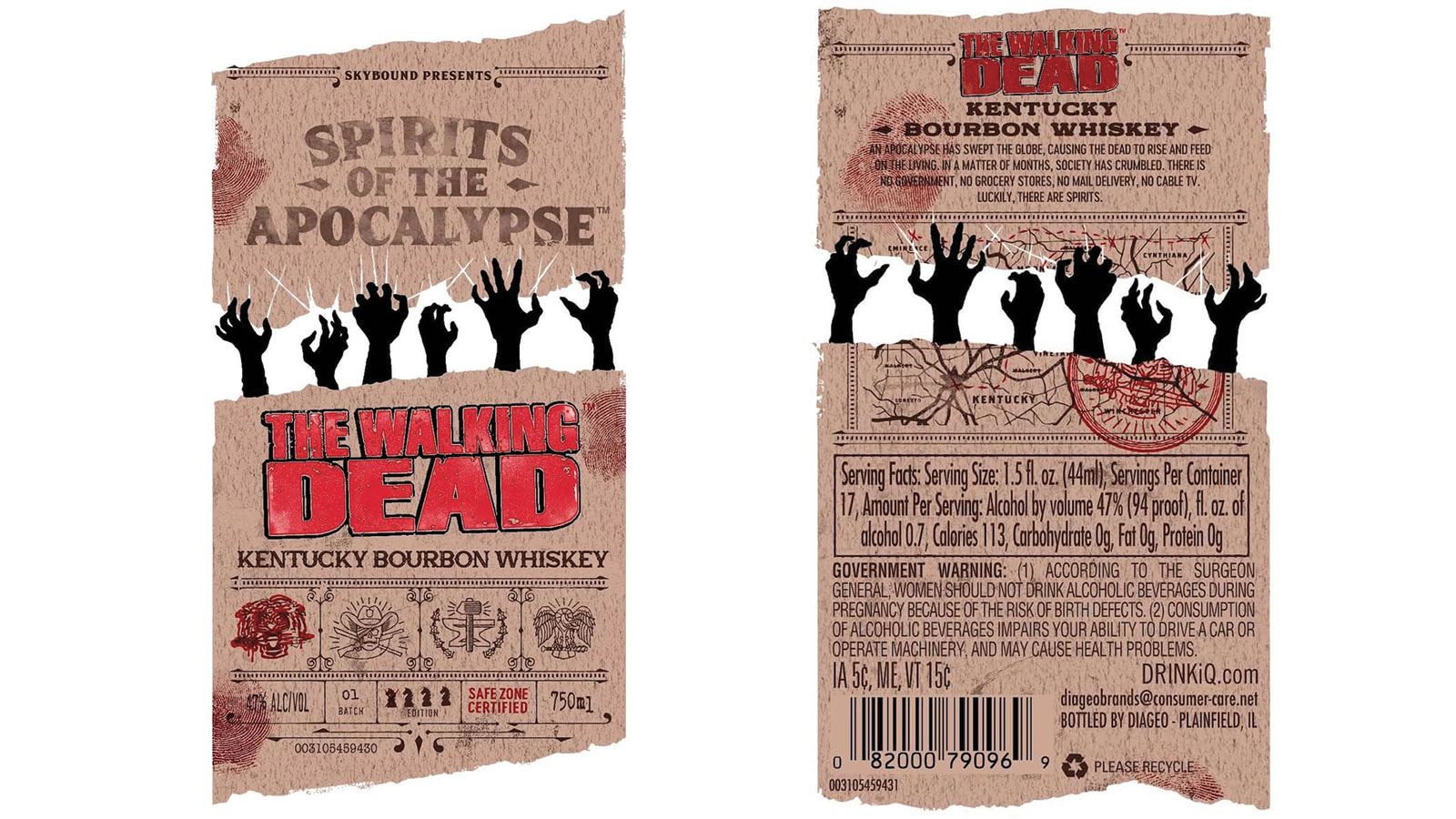 Update 7/26/19: Additional details on Spirits of the Apocalypse were announced at Comic-Con in San Diego on Friday, July 19. The bourbon will be a limited release and will hit retail shelves in the fall for $35. Season 10 of The Walking Dead will premiere on Sunday, October 6, so expect the whiskey to be out close to that date.

As far as zombie apocalypse essentials go, a bottle of whiskey may be right up there with your weapon of choice. The cast of AMC’s The Walking Dead has staved off walkers for nine seasons now, with a tenth coming later this year, and if fans of the show need a little help dealing with the stress of the undead lurking behind every corner, there appears to be a new Walking Dead-branded bourbon on the way. Producer Diageo has confirmed the pending new release, and we can share some information based on the public label approval from the Alcohol and Tobacco Tax and Trade Bureau (TTB). 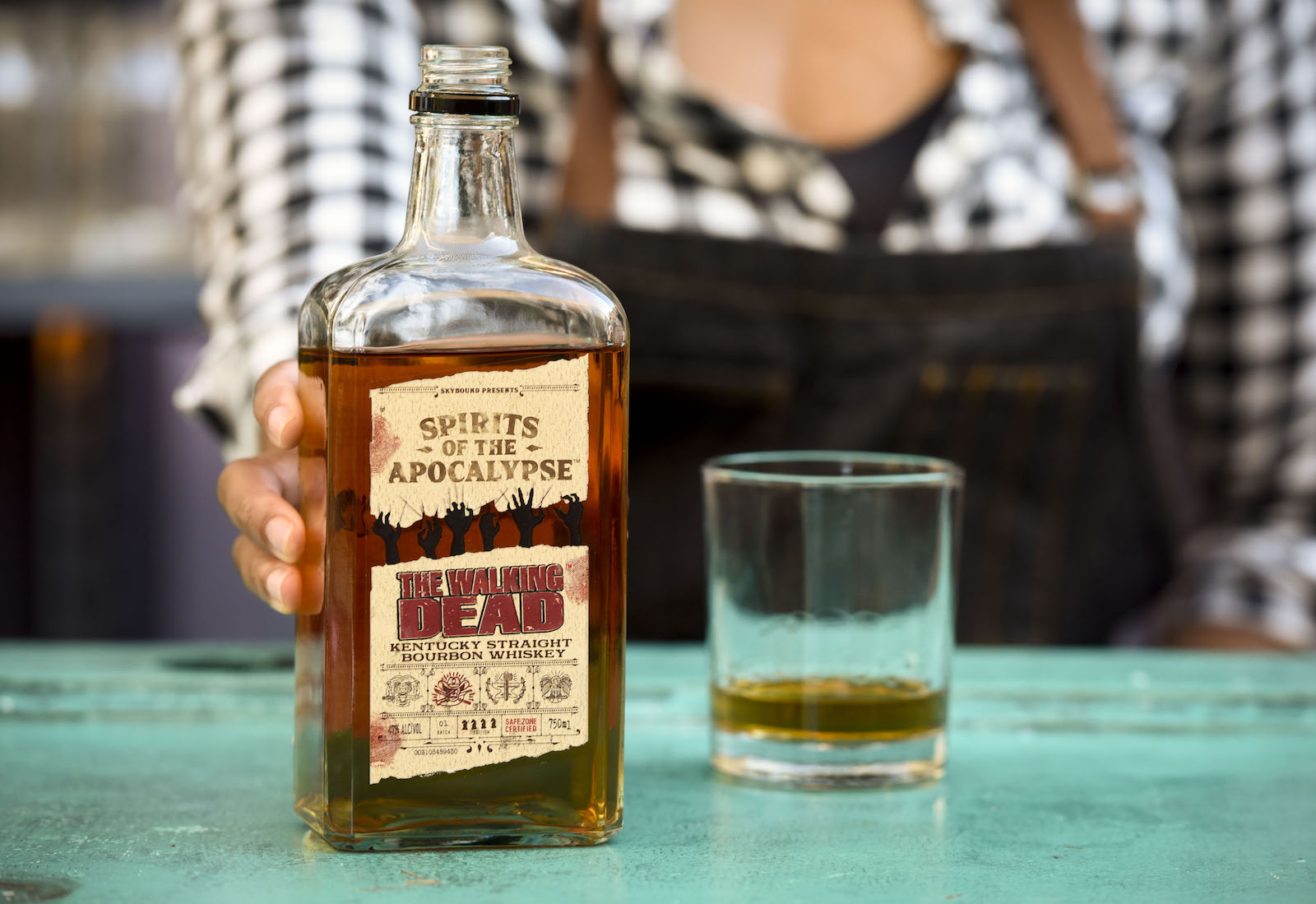 Spirits of the Apocalypse, a Kentucky Straight Bourbon from The Walking Dead, will be proofed at 47% ABV and sell for $35 when released this fall. (Photo by Vivien Killilea/Getty Images for Diageo and Skybound Entertainment))

Labeled “Spirits of the Apocaplypse,” The Walking Dead whiskey is a Kentucky bourbon proofed to 47% ABV. The back label sets the stage for society’s deterioration as occurs on the show, noting, “There is no government, no grocery stores, no mail delivery, no cable TV. Luckily, there are spirits.” The bourbon comes courtesy of Skybound (creator of The Walking Dead comic on which the show is based) and Diageo, which released eight single malt scotches and Johnnie Walker White Walker to coincide with the final season of Game of Thrones. While those whiskies (other than the blended Johnnie Walker White Walker) listed their distilleries, this bourbon does not. Diageo owns the Bulleit Distillery in Shelbyville, Kentucky, and began distilling there in 2017. Although it’s unlikely that any of that distillery’s whiskey is ready for release yet, the possibility can’t be ruled out since this bourbon isn’t labeled as “straight,” which would indicate that it’s under two years old. Update: This article was published based on the original TTB filing, which didn’t include “straight” on the label. Following this post, however, Diageo revised the label and product indicating that it is a straight bourbon.

Spirits of the Apocalypse is the latest TV-inspired whiskey release, joining the aforementioned Game of Thrones scotches, The Fixer blended whiskey (tying in with Showtime’s Ray Donovan) and a pair of Star Trek-inspired whiskies. In addition to anticipating The Walking Dead’s tenth season this year, and additional seasons of the spinoff Fear the Walking Dead, fans can also look forward to a bourbon that appears suited to good times and the end of times alike.