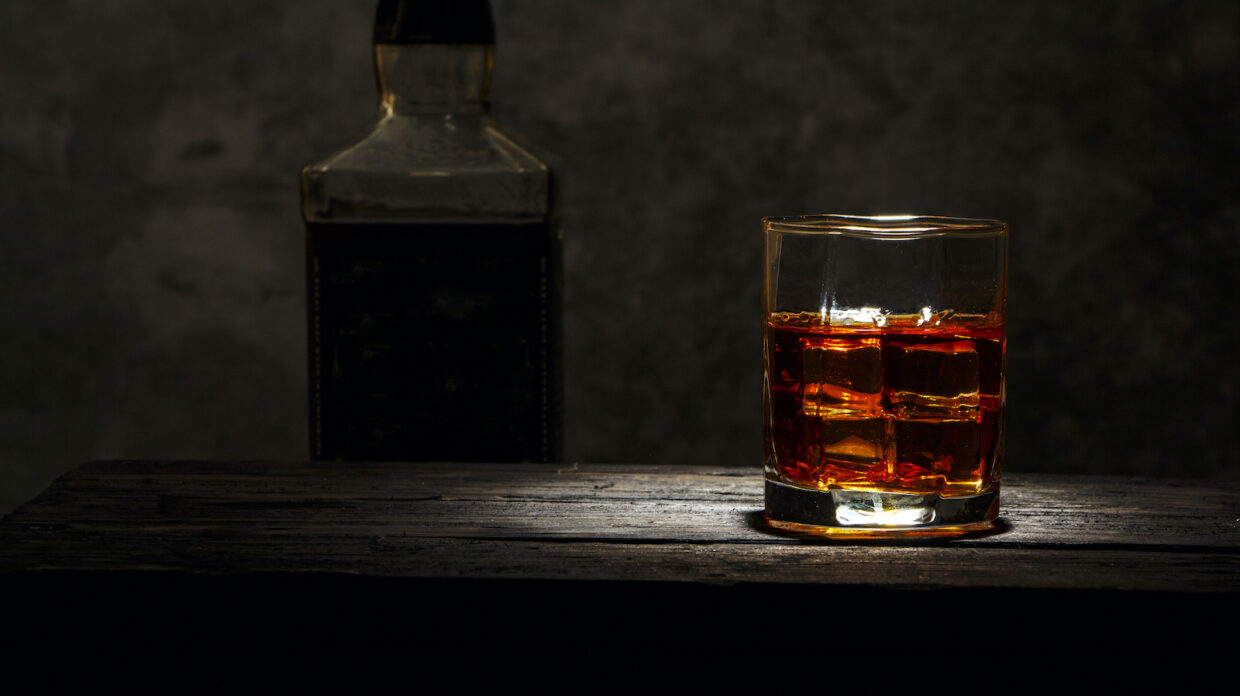 David Landrum is the founder of Two James Spirits, a small distillery in Detroit. His buddy, Jacques Driscoll, runs Johnny Noodle King, a nearby ramen shop. Driscoll was planning a bar program for the restaurant and asked Landrum if he might create a whiskey to complement his umami-rich broths.

“I was an art student,” says Landrum. “I’ve always been pushed by creativity. I like to keep making new things.”

He had been drinking a lot of Asian teas and lapsang souchong, a Chinese smoked tea, came to mind. It was a source of inspiration. Landrum infused a blend of corn and rye whiskeys with lapsang souchong and two other Asian teas. He calls it Johnny Smoking Gun. Driscoll loved it. Both the noodle shop and Two James’s tasting room serve it in cocktails and also neat with a “broth back.”

Interesting? Yes. Unique? Sure. Innovative? Absolutely! But is it whiskey?

That question sits at an intersection of art, craft, tradition, culture, law, commerce, imagination, taste—and probably a few other things. 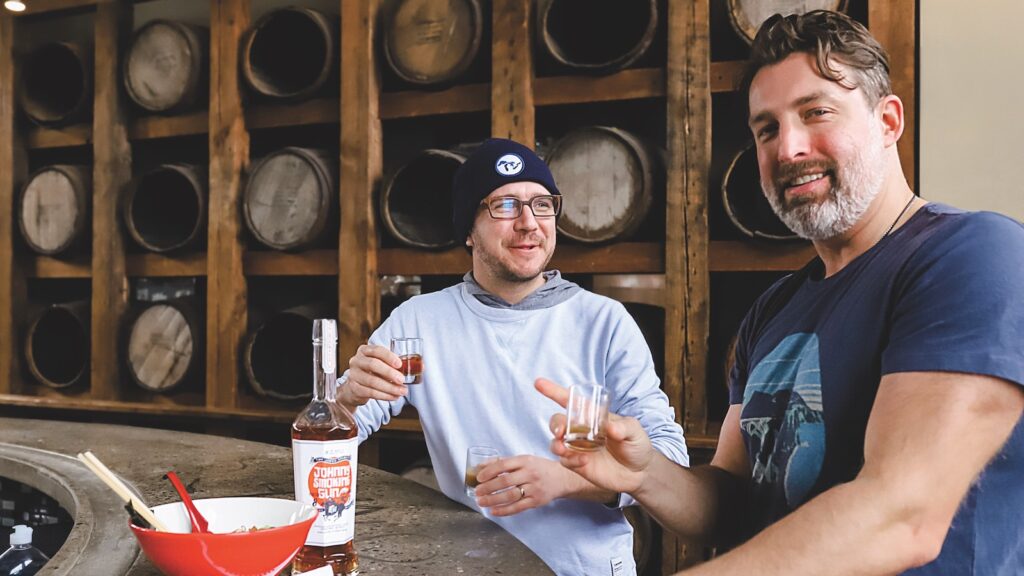 But Is It Whiskey?

According to the law that governs spirits labeling, no, Johnny Smoking Gun is not whiskey. It, and other products you might perceive as whiskey can be thought of more accurately as beverages that contain whiskey—along with something else. Depending on the product’s exact composition, it may be deemed a liqueur, a flavored whiskey, a distilled spirits specialty, or one of several other official classifications. But the label can prove confusing. A distilled spirits specialty made using “rye whiskey” might list those words prominently, landing the bottle on the shelf among other whiskeys, even if it’s not technically qualified as one at all.

One of the key promises of the craft spirits movement is innovation: new ideas, new flavors, and new methods. Drinkers must like all this innovation. The products are selling, and large distillers are copying them. 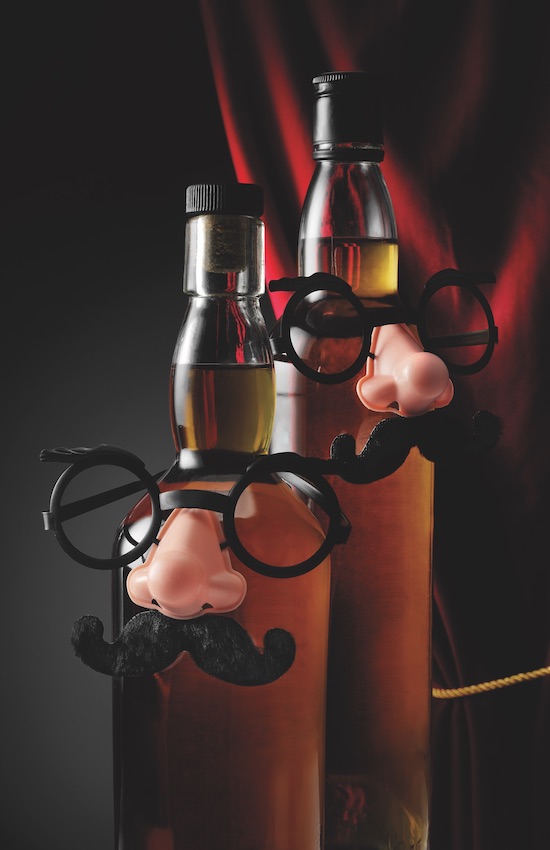 That tasty whiskey you’re enjoying may not be what it appears. (Photo by Jeff Harris)

Everyone says whiskey is popular again because drinkers crave authenticity, but many whiskey-esque products can be confusing to the point of deception. Will all these new whiskey variations prove overwhelming, or displace traditional products on the shelf? What happens to authenticity when whiskey products are loaded up with added flavors and sweeteners?

We want innovation and we want authenticity. Don’t tell us we can’t have both.

“My main view is, we’re trying to get more people to the category, so we’re blurring the lines,” says Ryan Maloney, owner of Julio’s Liquors in Westborough, Massachusetts. “Whiskey is hot so producers use the word to get more attention.” As Maloney points out, flavoring whiskey is not new. “Scotch has been using barrel finishes for years. Also peat—it’s a way to get a different flavor going in the whisky. It’s a flavor component.”

Julio’s has created a flavored whiskey section, adjacent to the flavored vodka aisle and around the corner from the whiskey section. “We set ourselves up as a whiskey store,” says Maloney. “Plenty of stuff we sell is not my cup of tea. That’s why we do a lot of tastings here, so the consumer can decide what they want to spend their money on.” With its clear areas for different whiskey styles, as well as flavored whiskey, Julio’s is helping its customers more easily explore their preferences.

“I was a purist, a curmudgeon, when this [flavored whiskey trend] all started,” says Larry Rice, owner of Louisville’s Silver Dollar, a bar and restaurant that specializes in bourbon and other Kentucky whiskeys. It has about 600 in stock, including vintage products that are no longer being made. Rice doesn’t think finished and flavored whiskeys are good for the category, even if they are getting more people to drink whiskey. “It’s a bit disingenuous,” he says. “The consumer isn’t going to learn the nuances. I think it dilutes the category,” meaning the drinker may not understand the difference between whiskey and whiskey with something else added. “Then again, if you make cocktails, it’s a little hypocritical to say you can’t add anything to bourbon. Maybe [these whiskey-based products] need another category just for clarity.”

Bob Zacharias, who runs the whiskey program at Chicago’s Fountainhead bar and restaurant, is a supporter of whiskey specialties. “I think overall they are good for whiskey,” he says. “I’ve certainly gotten some people into bourbon by trying Angel’s Envy first. Where it can get confusing is if someone tries Basil Hayden’s Dark Rye [which includes added port-style wine and is bottled at 40% ABV] and then wants to have a go at barrel-proof Stagg. Yikes! That’s where the retailer comes in, to educate staff and consumers on the differences between products and flavor profiles.”

Is this confusing the marketplace? Maybe for the uneducated consumer—I could see where it might be confusing. There are a lot of classifications already. —David Landrum, Two James Spirits

Dark Rye and other recent Basil Hayden’s releases have many people scratching their heads. Introduced a quarter-century ago as one of four bourbons in Jim Beam’s Small Batch Collection, (which also includes Booker’s, Baker’s, and Knob Creek), the name Basil Hayden’s has long indicated a Kentucky straight bourbon that’s distinguished by a high-rye recipe and an approachable 40% ABV. According to Jon Marks, marketing director for the Small Batch Collection, that approachability made Basil Hayden’s a natural fit for products such as Dark Rye, which is Kentucky straight rye whiskey blended with Canadian rye and port-style wine, and Caribbean Reserve Rye, a blend of Kentucky straight rye, Canadian rye, and rum. “Drinkers are looking for new things, looking to expand what they expect,” says Marks. “Basil doesn’t have to only be a bourbon. It can be a platform for other interesting, unique expressions that live up to the spirit of the brand.”

Caribbean Reserve is a limited release, but Dark Rye is a permanent addition to the Basil Hayden’s lineup. Marks says it took several tries to get the profile right. “The port tended to get overpowered by the Kentucky rye,” he explains. “The Canadian rye softened it out, helped the port shine.”

A whiskey drinker would be forgiven for thinking that in purchasing Dark Rye, they are getting American rye whiskey—but it does not come close to the definition, or taste, with a syrupy character and wine flavors that wouldn’t naturally be found in straight rye. Marks explains that the goal is to entice drinkers to step outside their comfort zone, flavor-wise, but with the reassurance that they’re getting the same quality found in other Basil Hayden’s releases. “Part of the joy is trying out and finding new things,” he says.

The Spice of Life

Marks believes that whiskey’s future is in this sort of differentiation and pushing the boundaries. Paul Hletko, owner and distiller at FEW Spirits in the Chicago suburb of Evanston, Illinois, agrees that innovative products can be good for the whiskey category if they’re done the right way. He makes a spirit called Cold Cut, which is bourbon that has been reduced from barrel proof to bottle proof not with water, but with cold-brew coffee, and recently introduced Immortal rye, which is proofed down with tea.

“I’d like to think our innovations are making the category stronger,” says Hletko. “To me, the important thing is clarity and honesty. Tell people what is in the bottle. When the whiskey drinker is purchasing a bottle, they ought to get what they think they’re getting.” Cold Cut is described on the label as “FEW bourbon whiskey with cold brew coffee.” “There’s nothing else. It’s virtually all bourbon; the coffee is relatively minimal,” says Hletko. 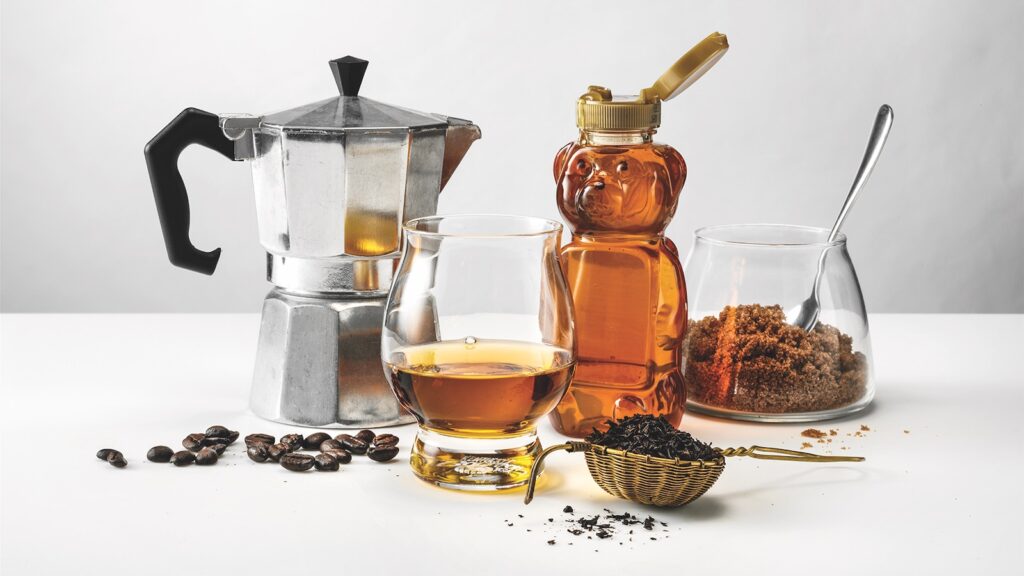 Distillers are adding honey, spice, and in some cases coffee to their whiskeys, creating an entirely new category of spirit. (Photo by Jeff Harris)

He does worry that super sugary-sweet products will cause confusion among drinkers because they are so different from authentic whiskey. Brands like Jack Daniel’s, Jim Beam, Wild Turkey, and Evan Williams have all enjoyed success with honey-flavored whiskeys bearing their names. All are very sweet, as are cinnamon-flavored whiskeys such as Fireball and Jack Daniel’s Tennessee Fire. In fact, it’s hard to taste whiskey in any of these low-proof, heavily flavored spirits.

The labeling rules set out and enforced by the U.S. Treasury Department’s Alcohol and Tobacco Tax and Trade Bureau (TTB) are of only limited help. There are nuances and complexities to these regulations that can escape translation by even the most dedicated consumers. What, for example, do the words “spirit whisky with natural flavors and caramel color” mean? If you look it up, you will find that TTB defines spirit whisky as “a mixture of neutral spirits and not less than 5% on a proof gallon basis whisky.” That means a product that is 95% vodka can still use the word “whiskey” on its label. In fact, Southern Comfort, which has long been marketed as a whiskey substitute and an approachable spirit for newcomers to whiskey, qualifies as a spirit whiskey. It is very sweet, flavored with fruit and spice, and only tastes like whiskey if you truly don’t know what whiskey tastes like.

It can be argued that Southern Comfort and similar products, like Yukon Jack, a flavored Canadian whisky, and Jeremiah Weed, a bourbon-based liqueur, have deliberately confused whiskey drinkers for decades. Going back further, America has a sad history of compound whiskey, where a variety of flavorings and colorings, some quite toxic, were used to fashion ersatz whiskey from neutral spirit. That prompted passage of the first national consumer protection laws more than a century ago. Despite the best efforts of TTB regulation, category confusion has always been a part of the whiskey world.

Back in Detroit, Landrum says he wasn’t trying to upset the whiskey cart with Johnny Smoking Gun. “It happened organically with the partnership” with the noodle shop, he says. “Is this confusing the marketplace? Maybe for the uneducated consumer—I could see where it might be confusing. There are a lot of classifications already.”

Then he puts on his artist hat. “But variety is the spice of life, right?”