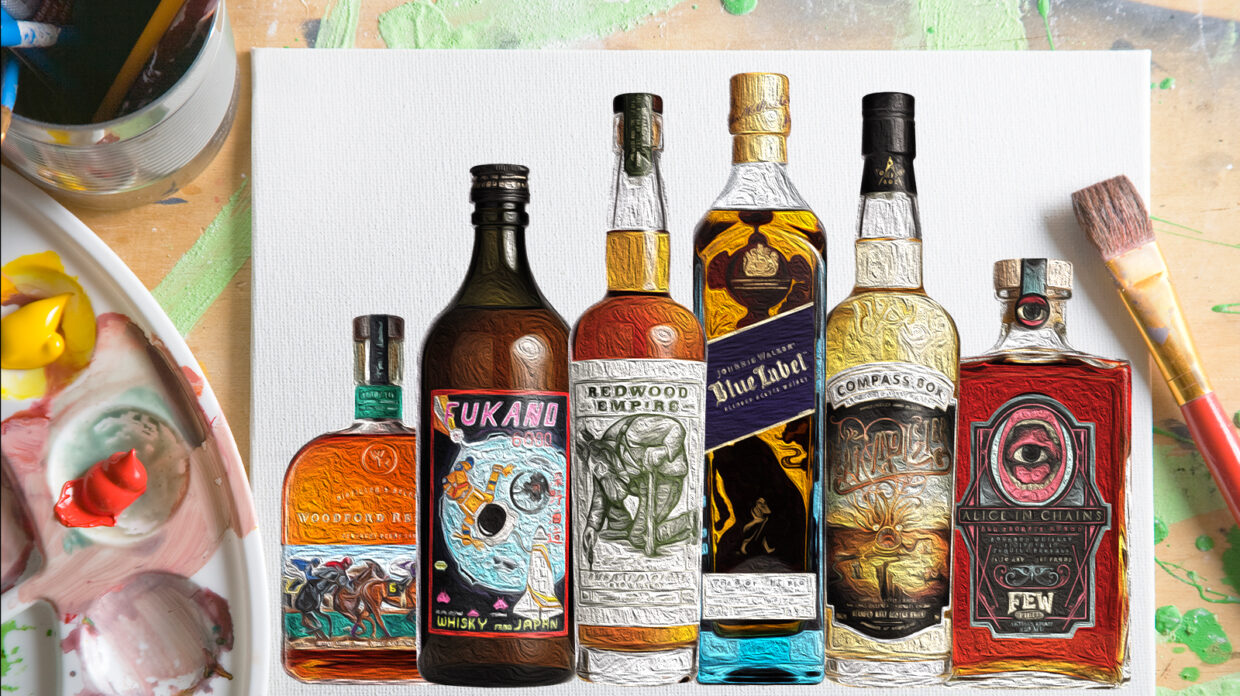 In November 2018 a bottle of Macallan 1926 60 year old, which had been hand-painted by Irish artist Michael Dillon, set a whisky auction record when it sold for $1.28 million. Few of us can afford a whisky that is such a certifiable work of art—inside and out—but you can still dress up your backbar. These more affordable artistic whisky labels, many of them limited editions, will transform your bar into a bona fide gallery. 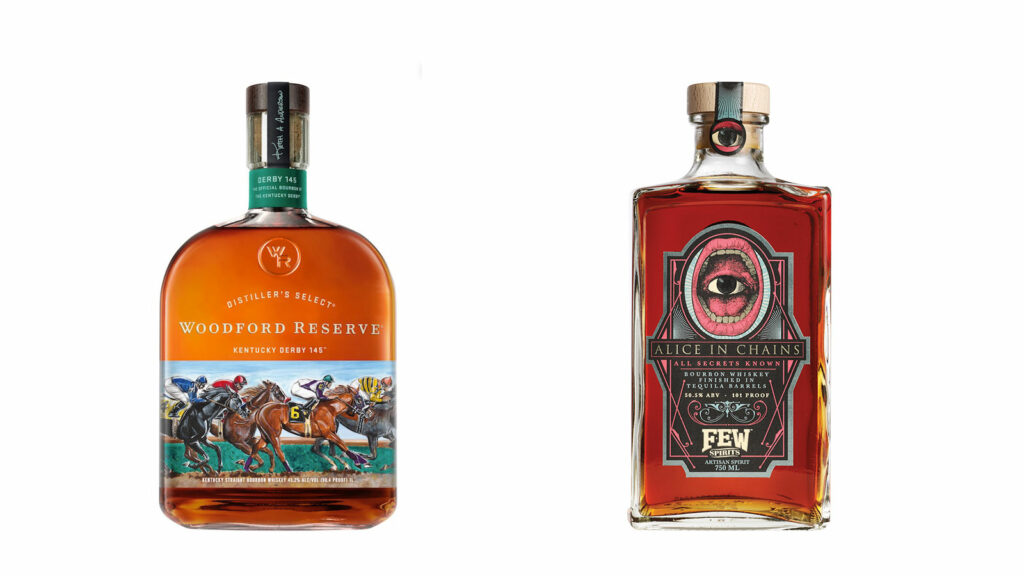 Woodford Reserve Kentucky Derby Edition (2019 release)—45.2%, $44
Keith Anderson, a Brown-Forman employee, debuted his racehorse painting on the 2018 Woodford Reserve Kentucky Derby bottle. The annual edition has been featuring artists since 2003. “I got to meet the artists who did the bottles and they’re the ones that told me ‘If you ever get a chance, you need to and the doors will open,’” Anderson says, and open they did. Following his encore on the 2019 bottle, Anderson is creating ticket and program art for Churchill Downs, home of the Derby.

FEW Alice in Chains All Secrets Known Tequila cask-finished bourbon—50.5%, $75
Knoxville, Tennessee native Justin Helton bridged his love of music and art by selling his original custom posters for bands like the Grateful Dead and Phish, at events like the Bonnaroo Music Festival. Following the 2016 release of the successful Flaming Lips label, FEW Spirits partnered with Helton for this psychedelic tribute to Alice in Chains. “I do so many concert posters and music-related design; it’s one of those fun projects that still ties that in but it’s a completely different animal in itself,” he says. 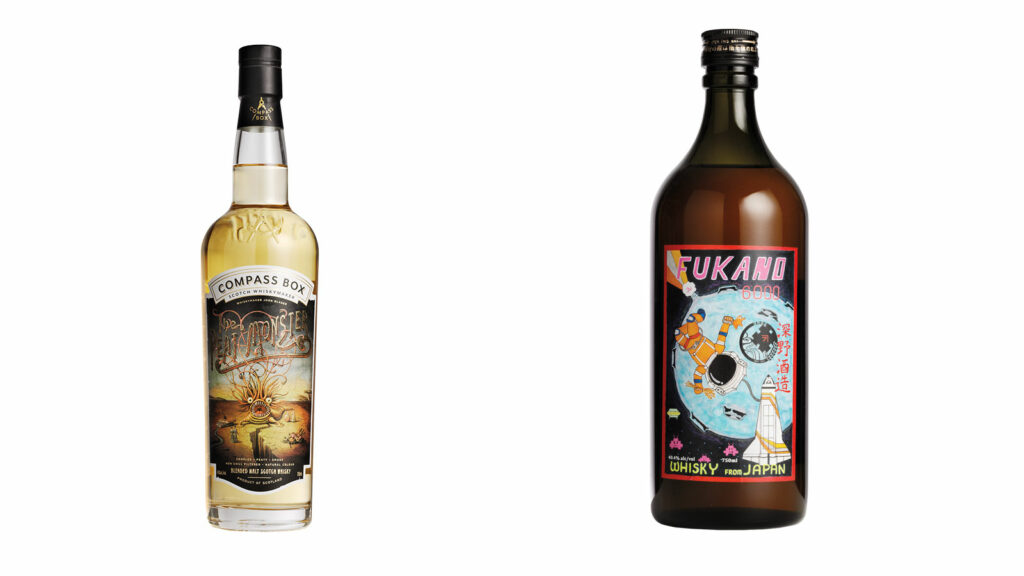 Compass Box The Peat Monster blended malt scotch—46%, $65
In 2019, Compass Box reworked both Peat Monster’s recipe and the label created by Marc Burckhardt for the whisky’s 10th anniversary in 2013. A portrait of Compass Box founder John Glaser was replaced with a bundle of flowers meant to symbolize creativity and growth. Burckhardt, who’s a fan of peaty whisky, incorporated books and glass vessels to capture the chemistry and science of whisky making. The original painting hangs in the Compass Box blending room in London.

Fukano 6000 Japanese rice whisky—40.4%, $90
American artist Linh Do injected her own sardonic humor, and influences like the 1943 French novella “The Little Prince” and an episode of “The Twilight Zone” into this label. The overturned astronaut is emblematic of the whisky in the bottle. “If you’re somebody who’s a traditionalist and who’s used to single malt Scotch whisky you would have a tendency to shy away from rice whisky,” Do says. “It’s supposed to represent that he’s turning the industry on its head and forcing you to rethink what the definition of whisky is.” 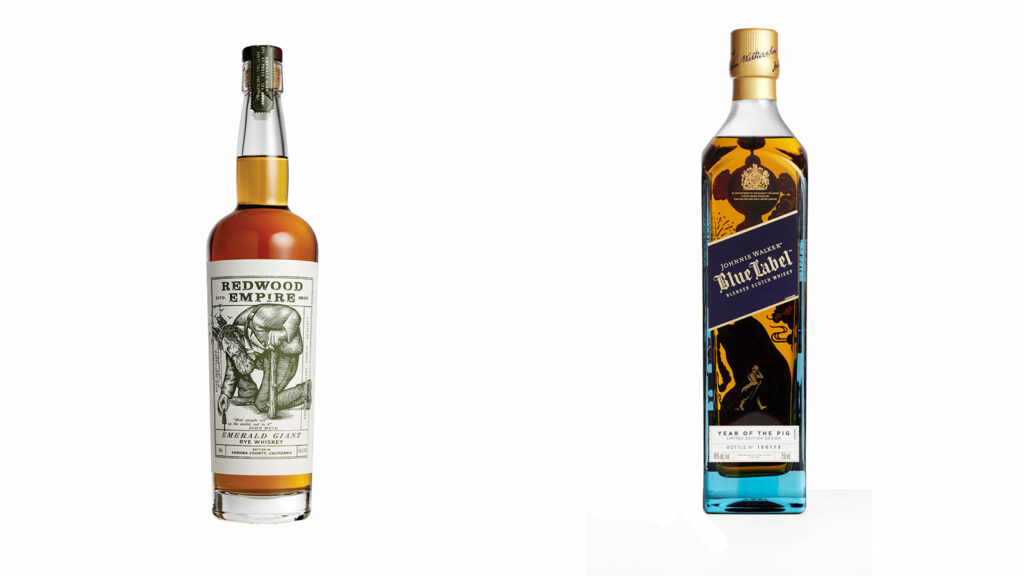 Johnnie Walker Blue Label Year of the Pig blended scotch—46%, $250
Johnnie Walker continued their Chinese calendar series in 2019 with the Year of the Pig. Chrissy Lau, a native of England living in Sydney, drew upon her Chinese heritage for inspiration with the pigs on three panels symbolizing the energy and prosperity associated with Chinese New Year, along with fireworks, lanterns, and clouds. “I was keen to create a design that was inspired by my own interpretation and heritage,” she says, noting she also has whisky heritage; her dad is a collector.