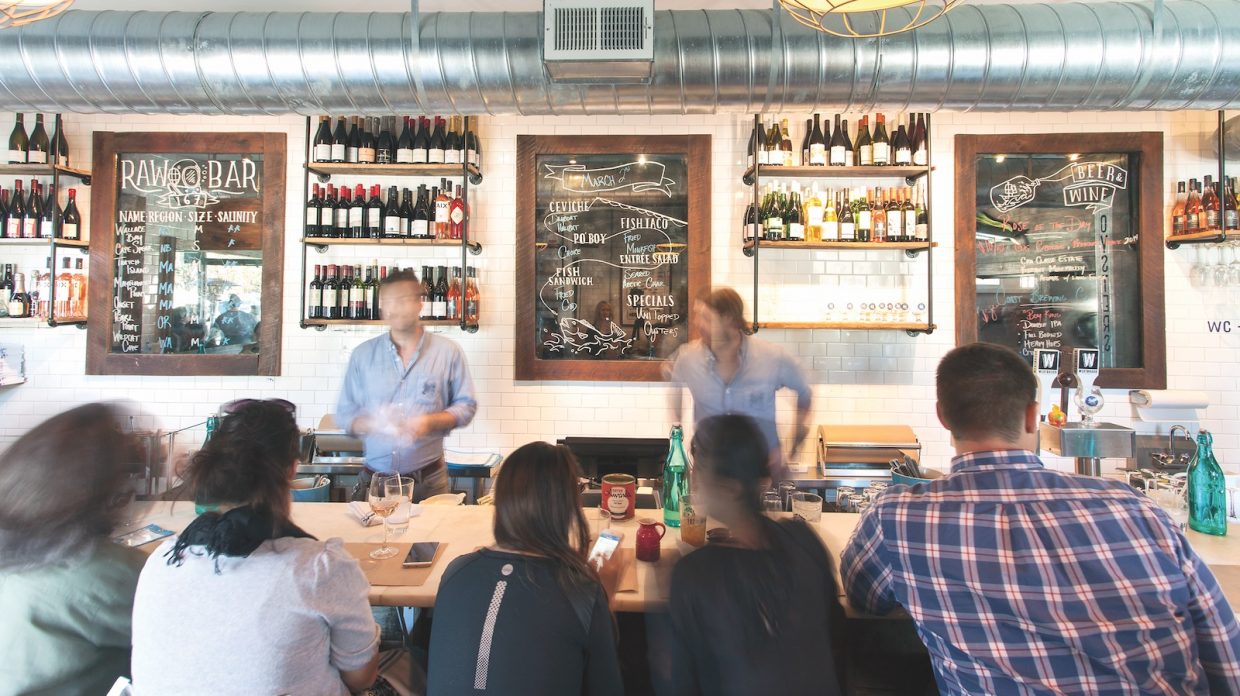 Charleston is home to a vibrant bar and restaurant scene, including 167 Raw, where generously meaty lobster rolls are served.

With its endless cobblestone streets, finely manicured gardens, bright-colored antebellum houses, and historic churches, food and beverage have a lot of competition for the attention of visitors to Charleston, South Carolina. Fortunately, the city’s chefs and bartenders are up to the challenge, combining local ingredients and history into mouthwatering dishes and drinks. “Charleston’s vibrant food and beverage scene is rooted in its rich agricultural diversity. Visitors can explore flavors they may not encounter anywhere else in the world, and that is true not just for its many amazing restaurants, but its whiskey makers too,” says Scott Blackwell, High Wire Distilling Co.’s co-owner and distiller. With every destination either walkable or a short ride, it’s easy to indulge in Charleston’s flavors, hospitality, and local pride.

Allow the aroma of butter and baked goods to lure you to Callie’s Hot Little Biscuit, a cozy, popular grab-and-go eatery. Grab their small, fluffy handmade biscuits for breakfast and savor along with a single-origin coffee at Kudu Coffee and Craft Beer, five minutes down King Street.

Then walk toward Liberty Square to board the first ferry of the day, either 9:30 a.m. or 11 a.m. depending on the time of year, to Fort Sumter. That way you can catch the flag-raising ceremony before spending the rest of the hour touring the grounds of the fort where North and South first clashed in the Civil War. 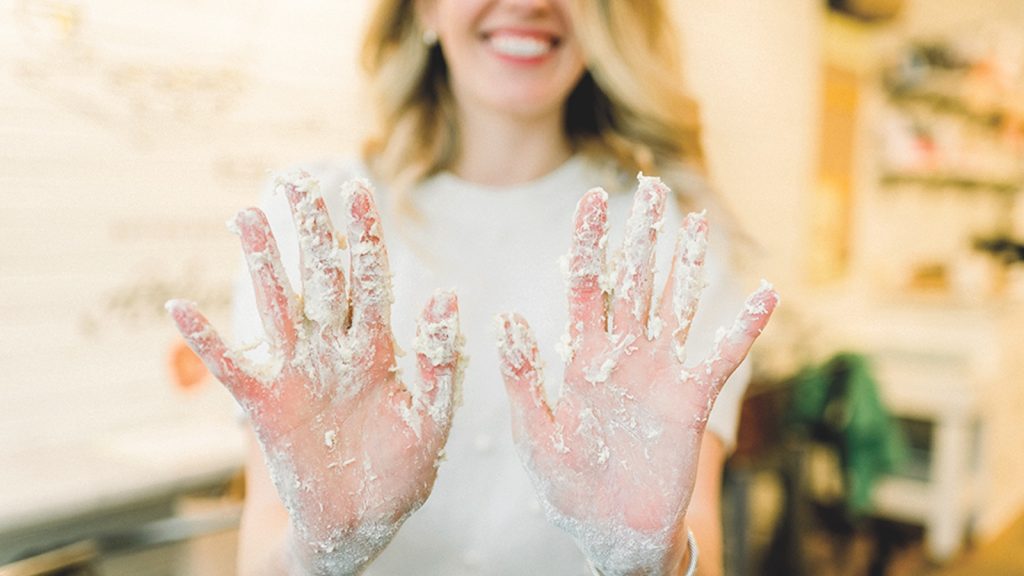 After the ferry ride back to downtown, scurry over to Goat.Sheep.Cow. to nab their sandwich of the day. Daily creations, like a prosciutto cotto, Cajun cheddar, cucumber, and mustard sandwich, often draw upon their vast selection of over 150 cheeses, but are limited to just 30 sandwiches, available every day except Sunday, so call ahead. Take your lunch to Waterfront Park for a relaxing picnic overlooking Charleston Harbor, or grab a generously meaty lobster roll from 167 Raw, just a ten-minute walk from the ferry stop.

If you stay at the peaceful, West Indies-themed Andrew Pinckney Inn, book an afternoon Charleston on Tap tour (starting at $399 per night) when you reserve your room. The guide will work with you to choose three brewery visits from among the local favorites like Westbrook, Revelry, Holy City, Tradesman, and Frothy Beard.

Otherwise, drive (or use Uber or Lyft) twelve minutes north to Striped Pig Distillery, which sometimes has limited releases of corn whiskey in addition to Striped ‘Shine—which co-owner and distiller Todd Weiss says was, at one time, the highest-proof moonshine bottled in the state (60% ABV)—available for sampling before touring their operation. Ice cream infused with neutral grain spirits at Hardscoop Distillery on Daniel Island is the perfect afternoon snack, whether you pick a standby flavor like chocolate or a seasonal specialty like pumpkin spice.

From there, it’s less than 20 minutes to Bottles Beverage Superstore in Mount Pleasant with over 600 whiskies, including local craft whiskeys and a trophy case of rare and high-dollar bottlings. After making your purchase, it’s a 15-minute ride to The Tavern at Rainbow Row, supposedly the oldest liquor store in the country, dating back to 1686. During Prohibition, the store fronted as a barbershop and “liquor was run through tunnels below the store,” says owner Theron Sandy. Most of the 250-plus bottles of whisky come from local, national, and international craft distilleries, with some rarities mixed in. 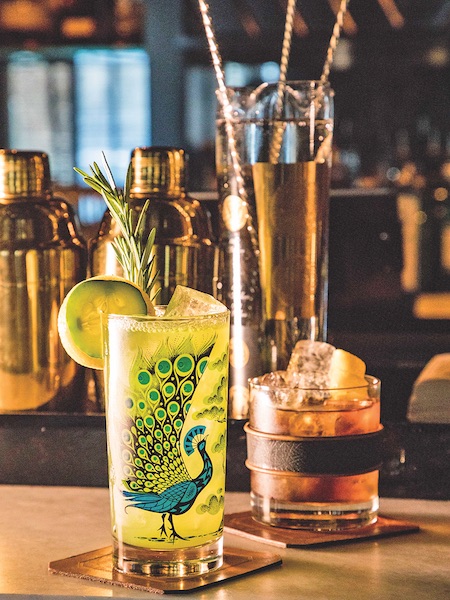 Inventive drinks such as Winter’s Awakening (left) and Hoodoo Carre are abundant at The Bar at The Spectator Hotel. (Photo by Peter Frank Edwards/Redux)

Walk to The Bar at HUSK for pre-dinner drinks next door to HUSK restaurant where the list of more than 175 mostly American whiskeys, along with whiskey-friendly bites like pimento cheese and bourbon-barbecue-glazed chicken wings, are a great start to a lowcountry evening. If you somehow resisted ordering food at HUSK, James Beard Award-winning chef Mike Lata will surely break your resolve at FIG. The menu changes daily to incorporate the freshest ingredients from local farmers and fishers. The white tablecloths and precisely plated dishes add a bit of upscale elegance to the friendly neighborhood bistro atmosphere. Inquire about their whiskey, as they often have special bottles not included on the menu, like Pappy Van Winkle’s Family Reserve and A.H. Hirsch Reserve. “Folks are serious about their bourbon and whiskey in Charleston, so we take a little extra care in finding the right whiskeys to suit everyone’s palate,” says co-owner Adam Nemirow.

Cap the night off with cocktails at The Bar at the Spectator Hotel. Get cozy on a leather couch in the dark, Prohibition-style bar and enjoy seasonal twists on classics, such as Trouble in the Henhouse, a refreshing Old Fashioned made with a medley of avian-named whiskeys: Wild Turkey Rare Breed, Eagle Rare, Chicken Cock, and Old Crow, hay-infused demerara simple syrup, and lemon bitters.

Several hotels, including the upscale waterfront HarbourView Inn, offer complimentary breakfasts of locally made biscuits, pastries, quiche, and more. Eat on the outside terrace overlooking the harbor and see how many church steeples you can spot, then come back in the early evening for the wine hour.

Spend the morning finding historical buildings, art galleries, and antique shops at every turn, notably the row of colorful houses dating back to circa 1740 known as Rainbow Row, and The Sportsman’s Gallery, featuring sporting and wildlife art by painters such as Ogden Pleissner, Frank Benson, and Bob Kuhn. Souvenir hunters will want to visit Charleston City Market, where local artisans sell sweetgrass baskets, leather goods, art, and more. And, if you still haven’t found that precious whisky you’ve been looking for, consider heading north to Burris Liquor, which claims to have the largest selection of liquor and alcohol beverages in South Carolina and specializes in high-end bourbon.

Rent a bike from Holy Spokes bike share and work up an appetite, with your eyes set on the roast beef with smoked onion jam, red peppers, miso mayo, and roasted tomato at Butcher and Bee or slow-cooked South Carolina barbecue at Home Team BBQ.

Hop in the car for a short ride to visit another young craft distillery, Charleston Distilling Co., which moved from downtown to James Island. Area legends’ names (John C. Calhoun and Denmark Vesey) adorn their ryes and bourbon made with local ingredients. There’s also a bourbon-barrel gin.

On your way back into town, hit Paddock & Whisky, a laid-back neighborhood bar with wood paneling on the walls and ceiling. The whisky selection numbers over 100, including a rotating selection of rare bourbons like Heaven Hill 27 year old Barrel Proof and their own private select Eagle Rare 10 year old. 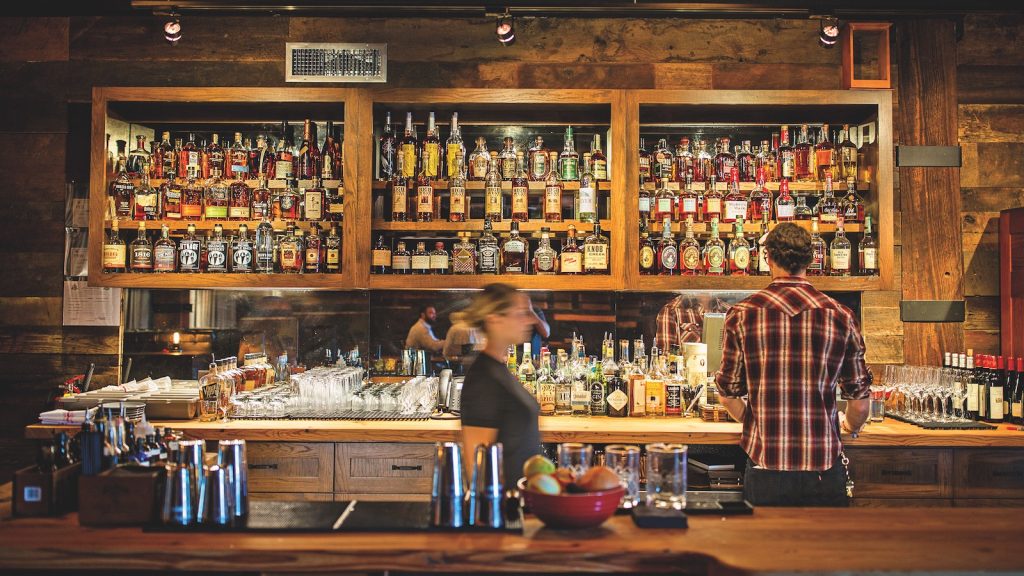 Over 150 bottles of whisky are available at Bar Mash—along with bocce and shuffleboard to play in between drams.

Play shuffleboard and bocce with a dram or two at Bar Mash, a former cigar factory where American whiskey—especially bourbon—dominates the list of about 150 bottles. There’s a steady stream of ever-changing rarities like Parker’s Heritage 11 year old Single Barrel and Jefferson’s Presidential Select 16 year old, so make nice with the bartender and ask what’s new.

Once you can pull yourself away from the games and jukebox, it’s time for dinner. Multiple-time James Beard Award-semifinalist chef Kevin Johnson highlights the flavors of locally farmed, foraged, and fished ingredients in dishes like the Lowcountry Seafood Pilau (gold rice, field peas, clams, shrimp, and fish) and the wood-roasted whole fish with potatoes, fennel, green olives, and salsa verde at The Grocery.

End the night with a cordial at one of Charleston’s many top cocktail bars. Wash down a homemade pop tart, like raspberry, brie, and almond, or Biscoff English butter cookie with a Beatnik (bourbon, Ramazotti, espresso, and chocolate bitters) at The Belmont; sip a foie gras-infused (and garnished) Manhattan at Doar Bros.; toast the irony of twelve pages of whisky, including Highland Park Odin and Michter’s 20 year old at Gin Joint; and embrace the odd balance of pickled boiled peanuts and spicy Coke in the bourbon Knuckleball at Proof. No matter where you go, Charleston bartenders aim to please and will mix up something you like—and that’s Southern hospitality at its finest. 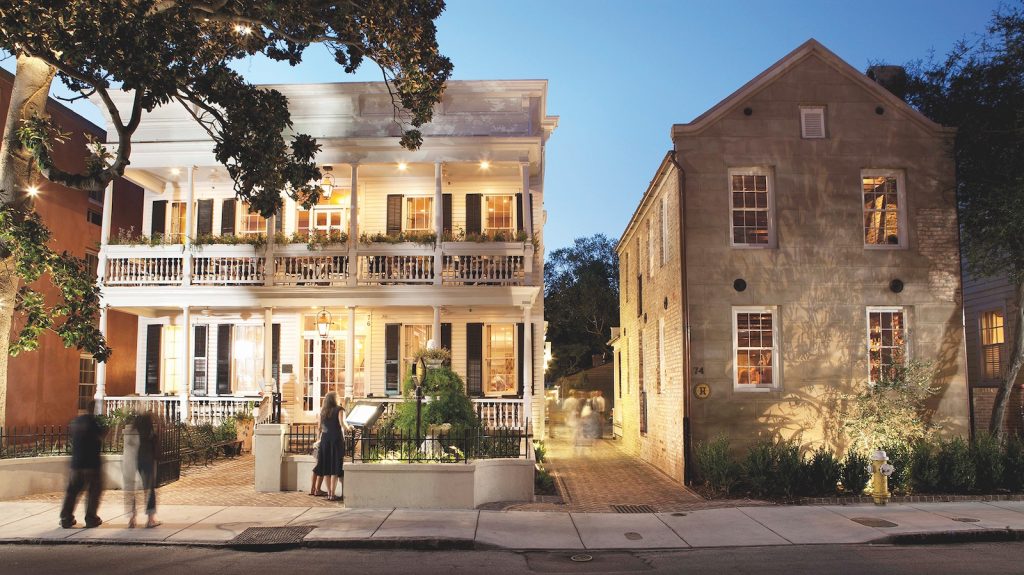 HUSK pulls double duty in Chucktown as a restaurant and a bar—which boasts over 175 whiskies.