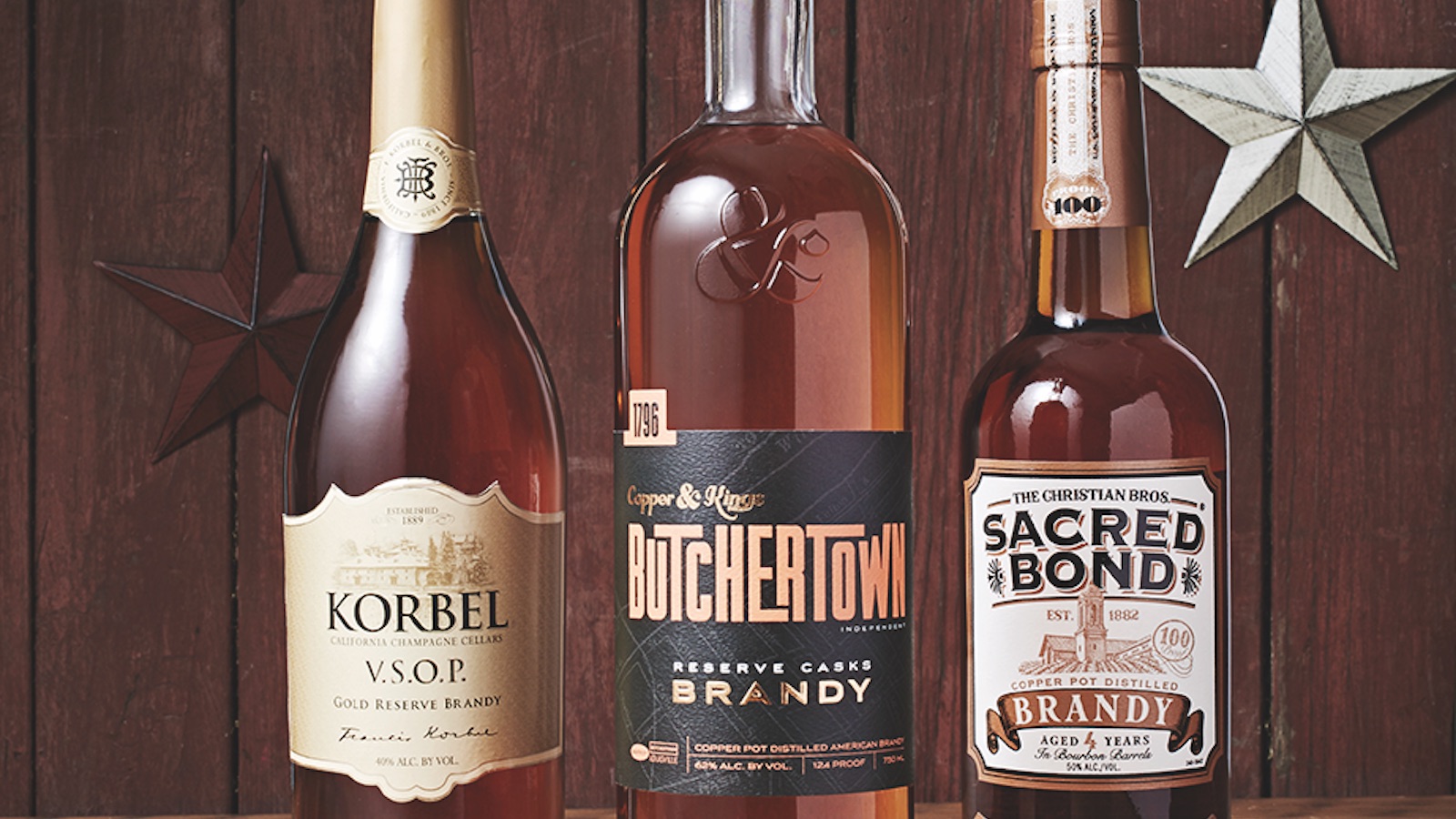 Distilled from grapes and aged in barrels, brandy has as much history in America as whiskey. (Photo by Jeff Harris)

Joe Heron, founder of the Louisville distillery Copper & Kings, wants to make one thing clear about his product: “It’s not Cognac made in America. We make American brandy.”

Heron is an anomaly in Louisville, the heart of American whiskey country, as part of a group of intrepid distillers who are turning heads with brandy. Distilled from grapes or other fermented fruit and often aged in oak casks, brandy is to grapes as whiskey is to grain—the distilled essence of its materials, aged to enhance flavor, blended for balance, then sipped or mixed.

Like bourbon and American whiskey, American brandy is stepping out from the shadows of the traditional European brandy producing regions—Armagnac and Cognac. Americans purchased roughly 123.3 million bottles of brandy/Cognac in 2017, outpacing gin, scotch, and Irish whiskey, according to the Distilled Spirits Council of the United States.

Craft distillers like Copper & Kings are joined by mainstream producers like Korbel and Christian Brothers, both of whom make laudable entrants. Unlike Cognac, American brandy does not dictate geography, grape varieties, or the distillation season. “We have just a ton of flexibility compared to what’s going on in Europe,” says Korbel master distiller Paul Ahvenainen. “There’s no reason we can’t produce some really top-notch product.”

The history of brandy in America is at least as old as whiskey’s. European colonists first fermented and distilled the abundant fruit of the New World in the 17th century, ahead of both rye and bourbon. On the east coast early settlers made brandy from a variety of fruit, including grapes, apples, pears, peaches, plums, and cherries. On the west coast, Spanish missionaries focused on grape brandy, starting in the 18th century. By the 19th century, domestic grape brandy got a boost when the phylloxera epidemic blighted French vineyards and devastated both wine and brandy production for years. Alas, Prohibition struck an almost fatal blow. After Prohibition, brandy’s popularity lagged behind whiskey and other spirits.

Luxury American brandy emerged in 1982 when Hubert Germain-Robin and Ansley Coale got a still from Cognac and started making brandy in California under the name Germain-Robin, one of the country’s first craft distillers. Germain-Robin aimed to recapture artisanal methods that Coale says were abandoned by modern French brandy. One approach was to make decisions by taste rather than scientific measurements. “It’s better if you slow it down,” he says. That classicist approach was leavened by some renegade tendencies, however. For instance, they used high-priced pinot noir grapes, whereas Cognac is dominated by ugni blanc, which can rarely stand on its own as a quality wine. “Our 30 year old product is better than Cognac,” adds Coale. “We were using better grapes.” E&J Gallo purchased Germain-Robin in 2017, a sign that the once niche specialty is going mainstream again.

Other producers have ventured farther afield, using column stills and turning to American oak barrels for maturation. “A used bourbon barrel is the best maturation vehicle,” says Heron. Despite varying styles, camaraderie exists in the tight-knit brandy circle. “It’s not like we’re working in a vacuum,” says Ahvenainen. “We’re talking to each other and saying, ‘Let’s go out and create some really nice stuff and jazz up this business.’

Catoctin Creek 1757—40%, $50
Catoctin Creek distills Virginia-grown grapes and uses Bordeaux casks for at least 2 years of maturing. The brandy has the vanilla and toffee notes of American whiskey, underscoring a rancio spice and dark fruit.

Copper & Kings Butchertown—62%, $55
This full-proof and non-chill filtered brandy is aged in both American whiskey and new oak barrels. The grapes include muscat, chenin blanc, and colombard. Very bourbon-like with vanilla, maple, and caramel, but the fruit comes through with berries, cherries, and pear. Lingering finish.

Christian Brothers Sacred Bond—50%, $18
Christian Brothers is owned by Heaven Hill, producer of several bonded bourbons, so perhaps it’s no surprise that they released a bottled in bond brandy. Pot distilled and aged in bourbon barrels, this has vanilla and caramel, fruity hard candy, florid grapes, and licorice.

Germain-Robin XO—40%, $120
This California entrant includes pinot noir grapes and is aged in Limousin oak upward of 12 years. Only ten casks are released a year, so it can be hard to find. Exceptional balance with subtle vanilla, caramel, cardamom, dark fruits, chocolate fudge, and a long finish.

Korbel VSOP Gold Reserve—40%, $14
An excellent value made from a selection of grapes including colombard, pinot noir, chenin blanc, and zinfandel. It starts with a crisp cinnamon graham cracker note and moves on to caramel, vanilla, and apple.

Osocalis Rare Alambic—40%, $45
While following a classic format, this Californian plays with grape varieties: a blend of pinot noir, sémillon, and colombard. At first it’s rich fruits (orange and tangerine), followed by floral notes, and finishes with spice (pepper or cinnamon).