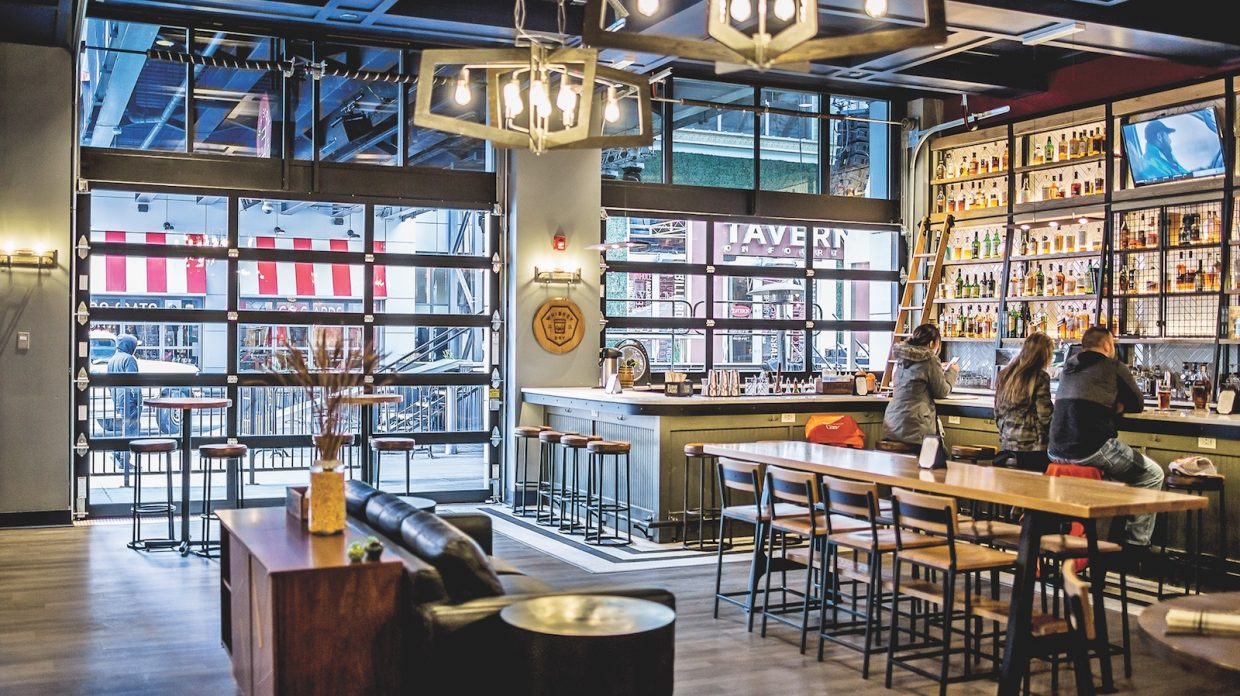 The Whiskey Dry cocktail menu includes a rotating slushie, custom creations, and well as a number of classics.

Kentucky is bourbon country, and Louisville is the capital. Home to distilleries and brand experiences from the likes of Jim Beam, Old Forester, and Evan Williams—all part of the Kentucky Bourbon Trail—the birthplace of the Old Fashioned, and the setting for the most exciting two minutes in sports and a bonafide cocktail holiday, the Kentucky Derby. Whether it’s a Mint Julep in your hand, a decadent Coffee & Donut cocktail from Whiskey Dry or simply a neat pour made down the block, Louisville is a bourbon drinker’s paradise and one of the greatest whiskey cities in the world.

Uber or Lyft are your best bets. Taxis can be scarce and the municipal bus system, TARC, isn’t conducive to a proper urban expedition. The major distillery visitor centers outside of town can require an hour’s drive, so a car rental and non-drinking driver are necessary unless you utilize an organized tour company.

Kentucky Derby Festival begins in April and continues through the famous race held the first weekend in May. It is by far the busiest (and priciest) time to visit the city; hotel rates soar. Two major bourbon events, similar in name but not in approach, occur annually. The Kentucky Bourbon Festival, held in September, brings droves of enthusiasts to sleepy Bardstown, although more of the events have migrated to Louisville in recent years. The Kentucky Bourbon Affair, held in September, is a more intimate event, offering distillery dinners and barrel selections, that includes up-close access to master distillers. 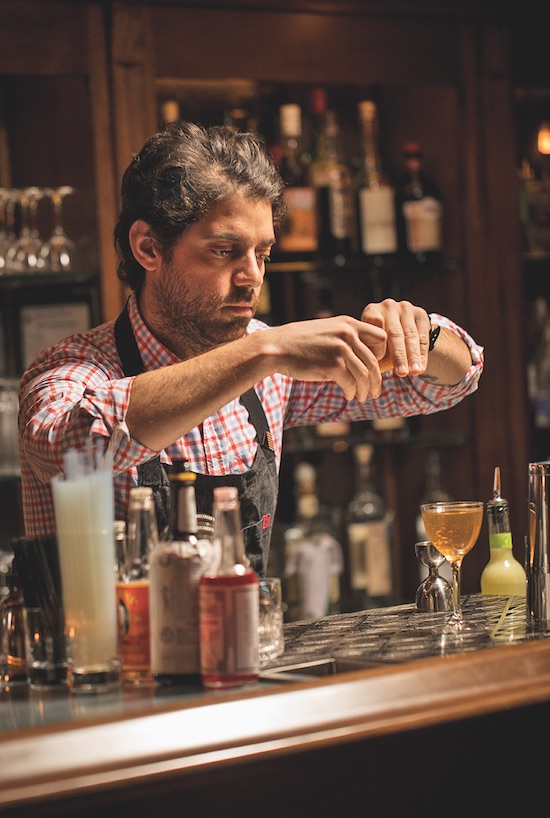 Take in the speakeasy vibes at Hell or High Water Bar as you sip a well-crafted whiskey cocktail. (Photo by Jessice Ebelhar)

Bars and restaurants in Louisville that have extended-hours licenses can serve until 4 a.m., although many elect to close by 2 a.m., which is when all areas outside Louisville cease serving.

Bourbons Bistro
One of the first bourbon bars in Louisville’s “bourbonism” revival, it carries more than 130 bourbons and antique whiskeys. Vintage photos and 1970s decanters evoke a bygone era.

Down One
Next door to the Seelbach, this bar is home to more than 170 bourbons, with proprietary bottles and some exceedingly rare selections.

North End Café
A laid-back bar offering more than 60 bourbons at reasonable prices, like Pappy 12 year old for under $20.

The Silver Dollar
Only Kentucky whiskeys can be found on this 250-plus pour list, which includes rare, antique single-barrel selections, housed in a restored 1890s firehouse.

21c Museum Hotel
Sits on Main Street among the distilleries, featuring an art gallery and the bar/restaurant Proof on Main with its impressive whiskey list.

Seelbach Hilton
An iconic Louisville institution with a restored 1900s bar that offers a large collection of single-barrel selections. Part of the original Urban Bourbon Trail.

Evergreen Liquors
With a selection of over 650 whiskies, you can find standards, hard-to-find selections, and your new favorite.

Old Town Liquors
This shop has cultivated a large selection of hand-picked single-barrel bottles that can’t be found elsewhere.

Westport Whiskey & Wine
Let the knowledgeable staff guide you to the perfect bottle, with everything from small batch to single barrel selections in the tasting room.

Grab a single-barrel rye at Kentucky Peerless. These are very limited editions, sold only in the gift shop. That’s right—buy rye in bourbon country, you rebel! Stick around long enough and you’re almost bound to run into a master distiller. Or, you can take home a bottle signed by a master distiller from Frazier History Museum. Visitors can fill their own bottle of Urban Stillhouse Select at Jim Beam’s Urban Stillhouse, just one of many distilleries that offer exclusive whiskeys. 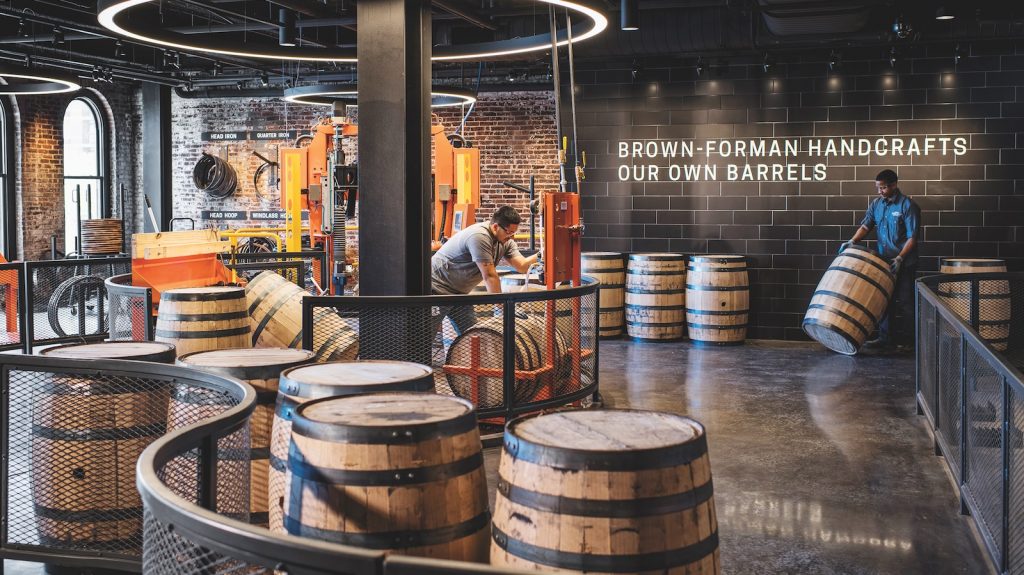 These distilleries are operating tours or making whiskey right in the heart of downtown Louisville. Some of these selections may include whiskey sourced from other distilleries or crafted at their larger facilities outside of the city.

Rabbit Hole Rye—84 points, $60
Made with 95% rye and 5% malted barley, this revels in the floral notes of young rye and comes laced with plenty of cinnamon. 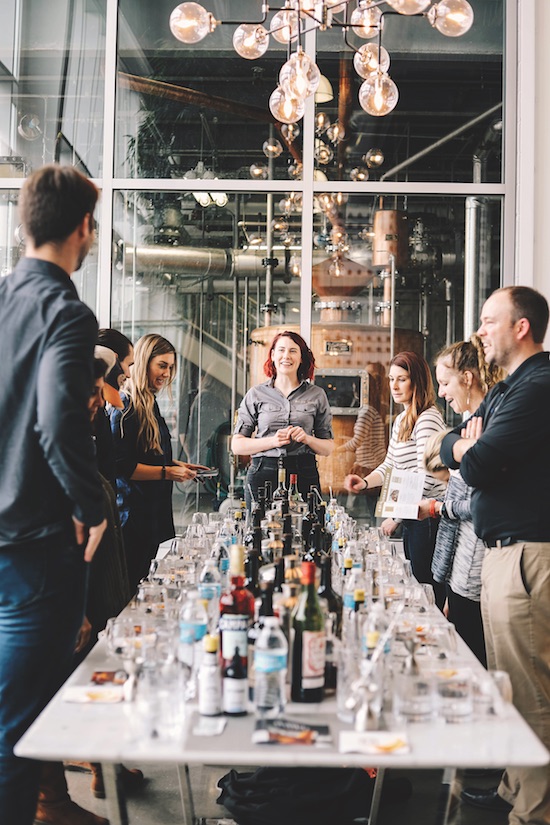 Mint Julep tours will take you to a number of local distilleries with the option to elevate your experience with a culinary and cocktail focus.

Distilleries to Visit Beyond Louisville

Buffalo Trace (Frankfort)
This national historic landmark is home to Pappy Van Winkle whiskeys and other cult favorites. A variety of creative, complimentary tours allow you to follow a barrel through the distillery or walk the excavated distillery of founder E.H. Taylor Jr.

Castle & Key (Frankfort)
The beautifully preserved grounds of the former E.H. Taylor Distillery are home to the 1887 castle-like distillery, springhouse, and gardens. Vodka and gin are currently available while their whiskey ages.

Four Roses (Lawrenceburg)
The Spanish mission-inspired architecture of the distillery is home to the two mashbills and five yeast strains used to craft their unique blends. Take a walking tour of the distillery and enjoy a guided tasting of their three signature bourbons.

James E. Pepper Distillery (Lexington)
This resurrected brand has made its home on the historic grounds of the Old Pepper Distillery. The distillery now produces whiskeys, bourbon, and ryes in addition to barrel-aged ales.

Jim Beam (Clermont)
On these scenic and historic grounds, well-known bourbons are distilled using water from nearby limestone streams. Enjoy a bourbon-inspired meal at Fred’s Smokehouse after your tour.

Kentucky Artisan Distillery (Crestwood)
This “farm to bottle” distillery uses grains grown on the neighboring 700 acres of farmland. This is home to Jefferson’s Reserve, Whiskey Row, and Iron Quarter bourbons.

Lux Row Distillery (Bardstown)
One of the newest stops on the Kentucky Bourbon Trail, this distillery opened in early 2018. The spacious grounds and production facility are home to popular brands like Rebel Yell and Ezra Brooks.

Maker’s Mark (Loretto)
This distillery has maintained the same old-fashioned processes since opening in 1953. Take a tour around the scenic grounds and dip your own bottle in the signature red wax.

New Riff (Newport)
This urban distillery utilizes a groundwater aquifer located directly beneath the building to craft its non-chill filtered bourbon and rye whiskey, as well as gin. They plan to experiment with new styles of whiskeys, including malted rye.

Town Branch Bourbon (Lexington)
This versatile distillery crafts Town Branch whiskeys in addition to gin and coffee-bourbon liqueur. A variety of bourbon barrel-aged beers are made at the sister brewery across the street.

Wild Turkey (Lawrenceburg)
The distinctive red and green warehouses at this distillery are home to whiskey favorites Wild Turkey 101 and Longbranch. The distillery’s visitor center is inspired by Kentucky tobacco barns and features a gorgeous view of the Kentucky River.

Willett (Bardstown)
This distillery traces its heritage back to 1936 and has taken great care to maintain its history by restoring the warehouses and cistern room. They now produce a wide variety of whiskeys, including Old Bardstown, Rowan’s Creek, and Willett Pot Still Reserve.