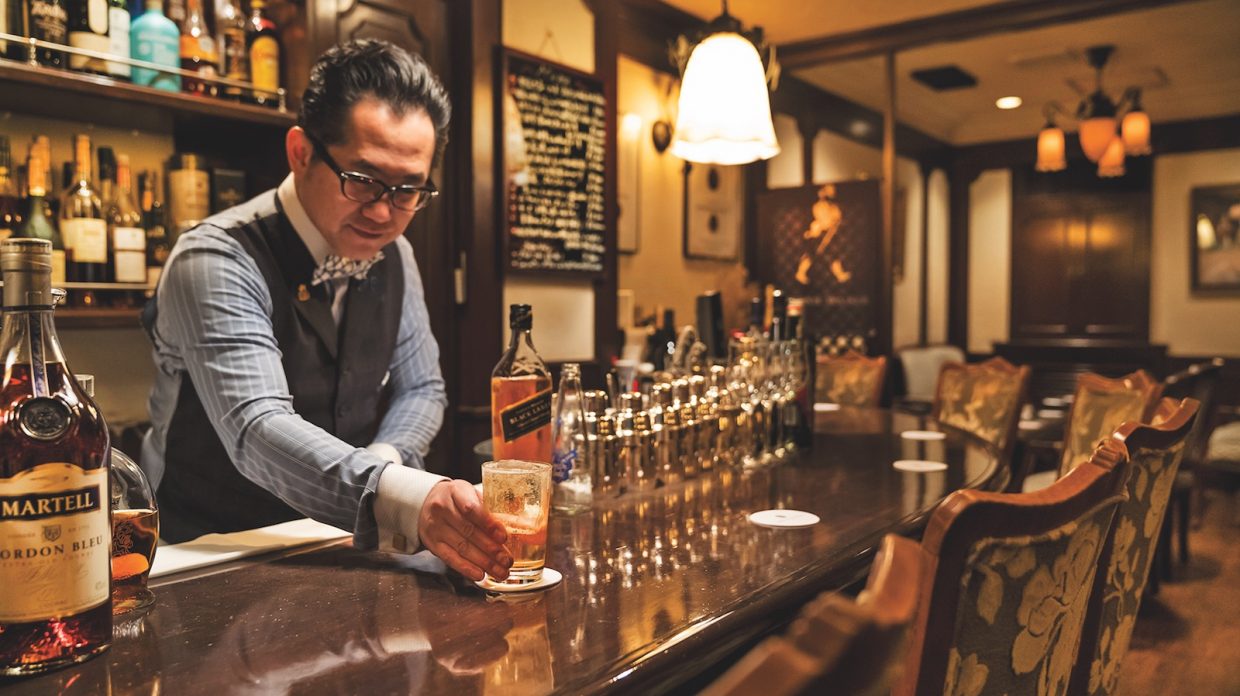 If Japanese whisky is your pursuit, then Osaka is the land of the plenty. With over 3,000 bars and restaurants on offer, the birthplace of Japanese whisky has history, a bustling bar scene, and several great distilleries. Keep these destinations in mind when planning your visit, and you’ll soon see what makes Osaka one of the greatest whisky cities in the world.

The subway makes it easy, but it shuts down between midnight and 5 a.m. Taxis are always available, and their unions have successfully blocked ride-sharing services. Uber has a cab-hailing app for licensed taxis. When hailing cabs, look for those with the 空車 (kuusha, literally “empty car”) in the windshield’s lower left corner.

The Osaka Whisky Festival is held in early June and Whisky History Osaka typically occurs in September or October, both of which welcome thousands of eager whisky lovers to large-scale tastings. Late summer can make distillery visits unpredictable since they often close for maintenance. August tends to be crowded everywhere and many businesses close because of Obon, an important holiday in Japanese culture honoring those who have died. The event features dancing, great street food, and many people wear traditional kimonos.

The official drinking age in Japan is 20. Most bars and clubs permit smoking. Drinking in the street is legal, but not encouraged. A canned Highball on the bullet train, however, is an acceptable pleasure. The huge array of bars and eateries means there is something for every taste, and late night revelers will find plenty of options that remain open into the wee hours.

The Bar Elixir-K
A speakeasy-type bar that specializes in vintage whisky and cocktails. The first floor is a counter bar, but do check out the upper floors, including the secret room. The bartenders speak English and there’s no table charge for foreigners for first-floor bar seats.

Bar Oaks Dram
A small bar with an impressive backroom vintage whisky collection. “I love Macallans from the 1960s best,” says owner Yoshihiko Ito. He doesn’t speak English, but is fluent in the language of whisky. Pours behind the counter of this members-only bar are accessible to non-members who share his passion for whisky and politely ask for admission. 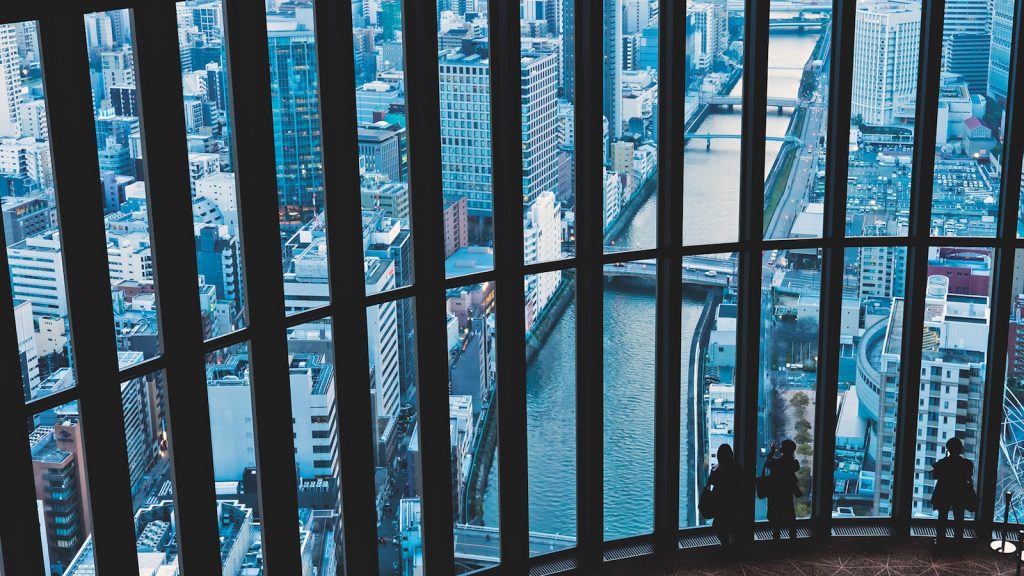 Go to 40 Sky Bar & Lounge for the views, but stay for the scotch and Japanese whisky on the menu. (Photo by Raymond Patrick)

40 Sky Bar & Lounge
A chic bar with a sense of fun. Impeccable service, incredible views. There is a lot of stately old scotch to be had, but you’ll want to focus on the mostly premium Japanese pours, at premium prices, including a few gems you won’t find in the U.S., like Miyagikyo Moscatel Wood Finish for 4,000 yen or Mars Twin Alps for 1,400 yen. You’re paying for the view. It’s worth it.

Bar Yoshida
An intimate place looking straight out of the 1920s serves up more epicurean eats than typically found at other Kitashinchi bars, such as thick-sliced Japanese beef-tongue steak or beef curry made with port wine. Both pair well with Yamazaki single malts.

Rogin’s Tavern
Packed with vintage whiskeys and old memorabilia, Rogin’s Tavern is a taste of the past. Is this the world’s best American whiskey bar? It certainly is Japan’s. No website; visit the Facebook page.

One Shot Bar Keith
One of the few Japanese whisky specialty bars in the country. Its Shin-Osaka location means only regulars and diehard Japanese whisky fans show up. Owner Teruhiko Yamamoto says he buys his stock direct to keep prices fair. Sounds good to us!

Umeda. You’re close to Kitashinchi, so no expensive cab rides after the trains stop running, and easy public transport for distillery visits. On the high end, the Ritz Carlton just renovated The Bar at its central Umeda location.
ritzcarlton.com

Ever since the Japanese woke up to their national treasure, it has been difficult to buy Japanese whisky in Japan. Department stores are either picked clean or sell by lottery. Liquor stores that do have age-statement bottlings will charge 200%-300% above the list price. Instead, Bic Camera in Namba is worth a look, as well as Liquor Mountain, Yamaya, and Aeon Liquor locations throughout Osaka. Don Quixote is typically overrun with tourists and increasingly overpriced, so skip. Suburban stores see less buying pressure and may prove more fruitful for determined whisky hunters.

Yamazaki Distillery
An iconic destination. Suntory offers several tours: an 80-minute for 1,000 yen (one is done in Japanese while one is conducted in English) and a more in-depth 100-minute one for 2,000 yen on weekends and holidays (English audio keeps visitors up to speed). Both tour the same parts of the distillery and include tastings. There is also a free tour of the museum, with its paid bar serving revolving pours of some fine whiskies. It was recently offering a half-ounce pour of Yamazaki 18 year old for 600 yen and Yamazaki 25 year old for 2,900 yen. Tour reservations can be made three months in advance. Book early! If you can’t take the tour, visit the Suntory Whisky House in Umeda, which has old bottles on display, but not for sale. In the back, there is a restaurant that serves Suntory whiskies. 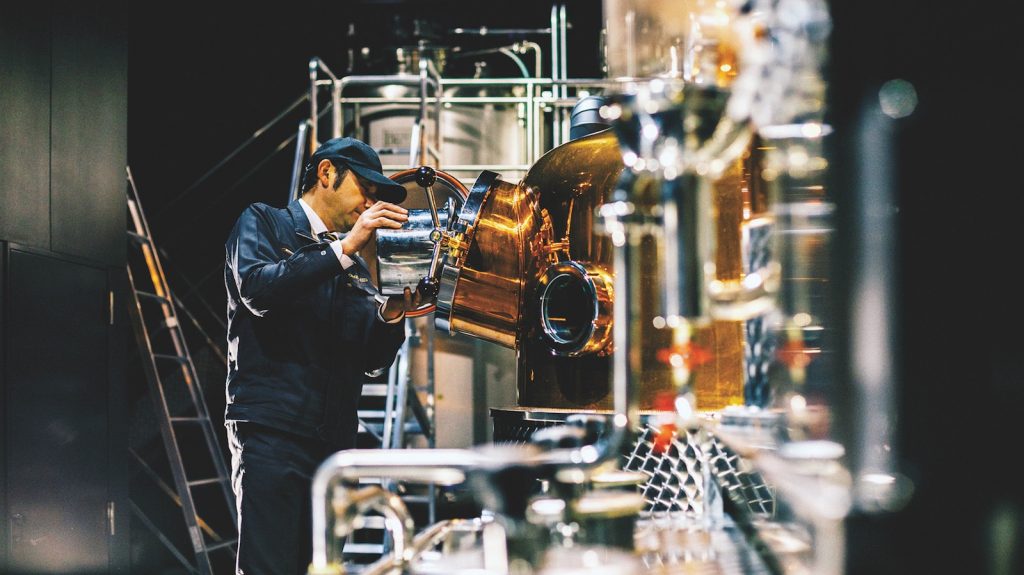 Sakurao Distillery is new on the scene, aiming to release a single malt in 2021.

White Oak Distillery
Experience an intimate, personal tour of one of Japan’s most interesting distilleries. For seven months, Eigashima Shuzo makes whisky; in fall and winter, sake. White Oak’s Yuji Nakamura is the world’s only master distiller who is also a toji (master sake brewer). The tour is conducted in English by Yuki Urabe, whose family has owned Eigashima Shuzo since its founding in 1888. The free tour includes a tasting. The company offers rare whisky bottlings while supplies last. Contact White Oak through its Facebook page about the tour.

Sakurao Distillery
Around two and a quarter hours from Shin-Osaka Station via bullet train, the Sakurao Distillery is another of Japan’s new whisky makers, aiming to release its first single malt in 2021. The distillery, which also makes an award-winning gin, offers a free tour and another for 2,000 yen that includes a tasting. Book at least one week in advance.

Well-aged Japanese whisky is increasingly scarce and Osaka’s smaller distillers, Nagahama and Sakurao, are still aging their whiskies for general release. Here are some whiskies crafted in the Osaka area and available for purchase in the U.S.

Suntory Toki—88 points, $40
A quaffable Japanese blend from Yamazaki and others, with smoky embers, roasted spices, and whole peppercorn over orchard fruit. Perfect in a Highball.

White Oak Akashi—83 points, $100
A single malt that is floral on the nose with icing sugar, green tea, sweet toffee, and juicy fruits leading to a core of tangerine and watermelon that remains light in body and texture.