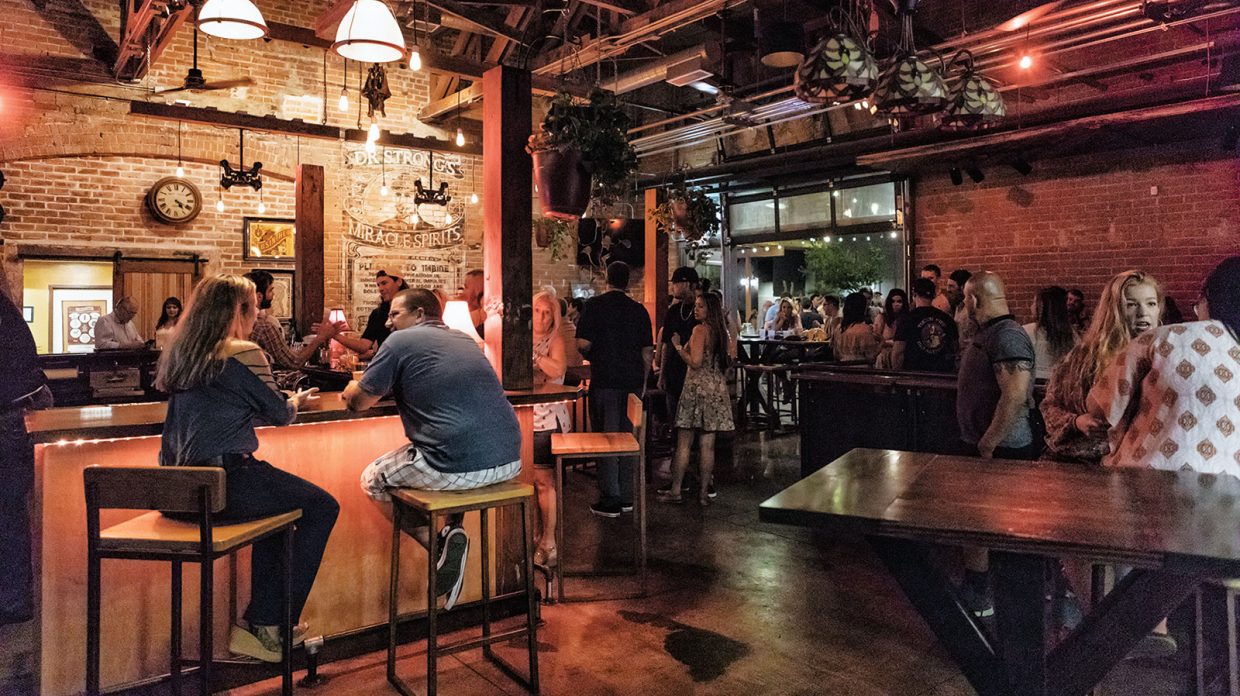 Despite its arid environment, Tucson is a wet town, with plenty of whisky flowing. Independent Distillery offers a range of whiskey cocktails at its bar.

You might not think of Tucson as one of the world’s great food cities, but the United Nations begs to differ: UNESCO designated the southern Arizona metropolis as a World City of Gastronomy in 2015—the first city in the United States to earn the honor.

Founded by the Spanish in 1775, Tucson is home to the longest-established agricultural tradition in the country and is uniquely situated at the intersection of three cultures that have coexisted for centuries: American, Mexican, and Native American. All three influences are alive and well in the present day, revitalized by the modern interest in regionality, locavorism, and sustainable development. That enthusiasm also appears in the city’s burgeoning drinks scene, making Tucson home to an array of distinctly Southwestern potables.

Tucson is only a quarter the size of Phoenix, but the city has fostered a sophisticated cultural community that can go toe-to-toe with its larger neighbor. The revitalized downtown is quite walkable, at least in the evenings and in the winter, but this is still a sprawling Sun Belt city with limited public transportation. Uber, Lyft, and cabs work well in the city, but you’ll want a car so you can visit the desert mountains just outside town. 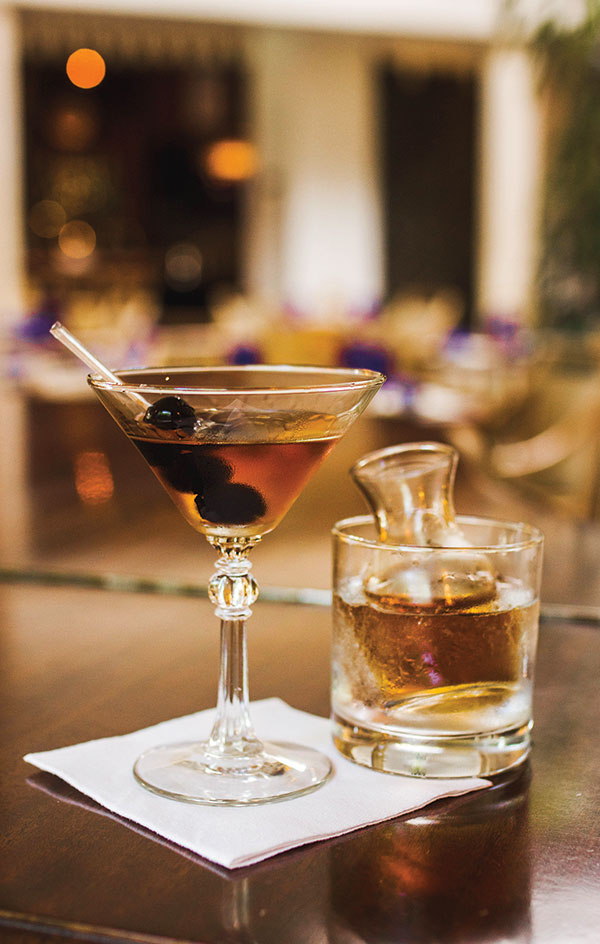 The historic Arizona Inn offers classic whiskey cocktails, like the Manhattan, in a stunning desert setting.

Start your morning exploring the historic sites of downtown Tucson before it gets too hot. Grab a coffee and a pastry at Cartel Coffee Lab, then stroll by the Old Pima County Courthouse, built in 1928, and spend some time in the Tucson Museum of Art, renowned for its Southwestern and Native American collections. Tour the Presidio San Agustín del Tucson, a reconstruction of the 18th-century Spanish fortress whose founding marked the birth of the city. Then grab lunch nearby at El Charro Café, a Tucson institution and one of the country’s oldest Mexican restaurants.

After lunch, hop in a cab to Hamilton Distillers, which makes Arizona single malt whiskey in the desert heat. Tour the facility (Saturdays only) to see the on-site malting kiln and the wood furnace used to imbue the malt, and the whiskey, with unmistakable mesquite smoke. After tasting through the Whiskey Del Bac lineup, try the house cocktail—a blend of Whiskey Del Bac Clear and eegee’s, a frozen slushy that’s a Tucson specialty.

If hot regions like Spain, Sicily, and Israel can make great wine, why can’t Arizona? Challenge your preconceptions at the tasting room of Sand Reckoner Vineyards, a winery that grows its grapes in the high-elevation desert of southeastern Arizona. Try the Malvasia Bianca, the Syrah, and the Tempranillo. Then sample a selection of craft beers from Tucson and across the Southwest at Tap + Bottle, just a few blocks away. Arizona wine country, just an hour from town, is also home to Elgin Distillery, which makes bourbon and pot still malt whiskey, and Flying Leap Vineyards & Distillery, producer of wine, brandy, grappa, and a few limited-edition whiskeys available in the tasting room.

Back in the heart of downtown, grab a cone at HUB Restaurant & Ice Creamery—the ice cream is made just across the street. At The Independent Distillery, enjoy a pre-dinner Scofflaw Punch, made with rye whiskey, fresh-squeezed lemons, house-made grenadine, and sparkling wine. Or, if you’re a beer fan, stop by Pueblo Vida Brewing Co. for hazy IPAs, sours, stouts, and other craft brews.

Have dinner at Downtown Kitchen + Cocktails, helmed by Janos Wilder, who won the James Beard Best Chef: Southwest Award in 2000. After a desert-influenced cocktail like the Tucson Lemonade (whiskey, lemon juice, sage syrup, and a hibiscus float), enjoy modern world cuisine made with seasonal, local ingredients. Close out your night sipping from a broad selection of world and craft whiskeys, including McCarthy’s single malt and Sierra Norte Mexican Black Corn whiskey, at Batch Cafe & Bar while enjoying a bananas Foster or hot fudge doughnut dessert, or hit the Owls Club for rare whiskies like Port Ellen 34 year old and Old Forester Birthday bourbon. Stay at the new, centrally located AC Hotel by Marriott Tucson Downtown. It has a pool; you’ll want it.

Get up with the sun and grab a breakfast burrito at the Anita Street Market or brave the lines at Barrio Bread, a community-supported bakery that makes extensive use of local heirloom grains. Then see Tucson’s unique geography—nestled on an elevated plain in the Sonoran Desert, surrounded by five mountain ranges—by driving 20 minutes west into the Tucson Mountains. There, the Arizona-Sonora Desert Museum, a mostly outdoors natural history museum, zoo, and botanical garden, showcases the desert and its well-adapted inhabitants. Keep an eye out for coyotes, javelinas, and even mountain lions. Afterward, venture into the Tucson Mountain District of Saguaro National Park, home to one of the most iconic symbols of the Old West—the saguaro cactus. Cool off at the Red Hills Visitor Center, then take a short hike (bring water) or drive the Scenic Bajada Loop. The Rincon Mountain District of the park, just east of the city, is more rugged and mountainous, but best saved for longer excursions. 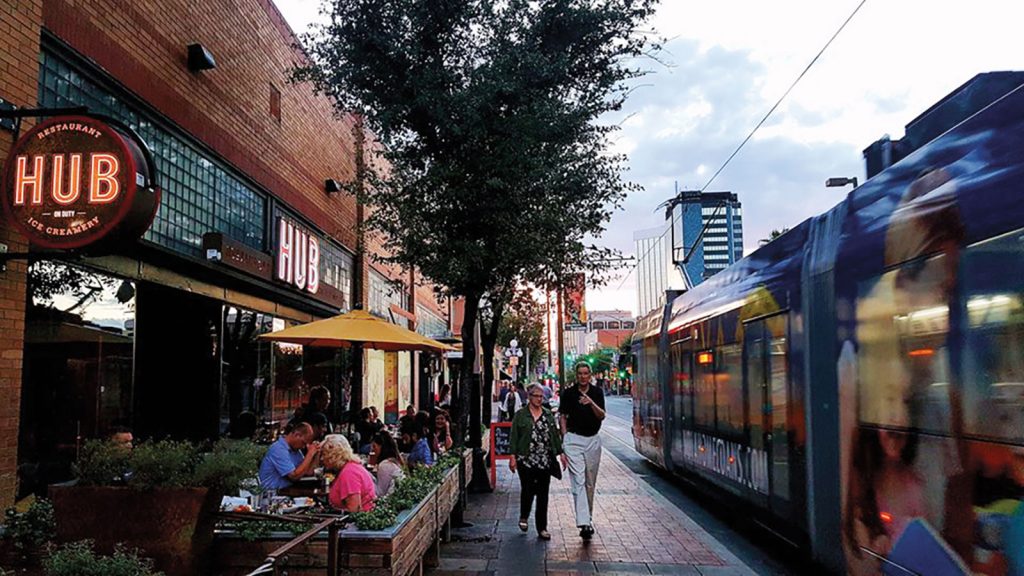 Cool off by grabbing a cone at HUB Restaurant & Ice Creamery in the heart of downtown Tucson.

Drive back into the city for the ultimate local delicacy—the Sonoran hot dog, a frankfurter on a large, doughy bolillo bun, and stuffed to the hilt with tomatoes, onions, jalapeño salsa, mayo, mustard, bacon, pinto beans, and other condiments. El Guëro Canelo, with three locations in Tucson, is the most famous purveyor—and at just $3.50 it’s probably the cheapest meal you’ll ever have at a James Beard Award-winning restaurant.

Next, head to Mission San Xavier del Bac, an 18th-century Spanish mission on the city’s southern outskirts. Still in use today, the mission is the oldest European building in Arizona and has become a Tucson icon. Then explore the grounds of the University of Arizona. Its Flandrau Science Center and Planetarium hosts a number of exhibits that appeal to all ages, including a large gem and mineral collection. Near the university is Three Wells Distilling Co., which, along with making bourbon, gin, and vodka, produces a true rarity: American spirits distilled from agave, in the style of tequila. Try the Agave Silver and Agave Reposado, as well as the Sonora Gold, distilled from local prickly pear cactus fruit.

Close out your time in Tucson at the historic Arizona Inn, built in 1930, less than two decades after Arizona became a state. See how the desert can bloom as you wander the hotel’s extensive gardens, then settle onto the patio with a cocktail—an Arizona Rye Old-Fashioned, a Last Word, or the Tucson Whiskey Flight, consisting of the three core Whiskey Del Bac offerings—then enjoy dinner outdoors while the sun sets over the desert. 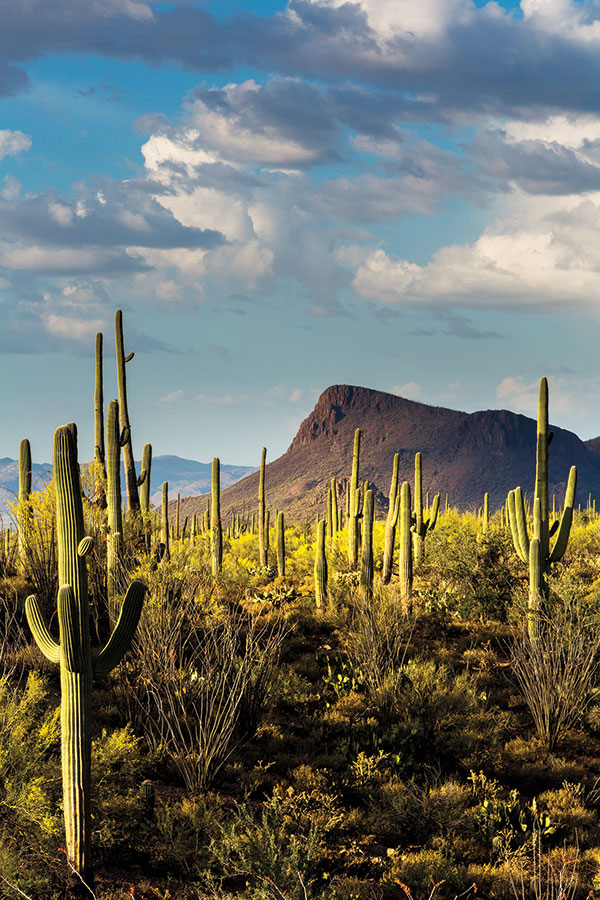