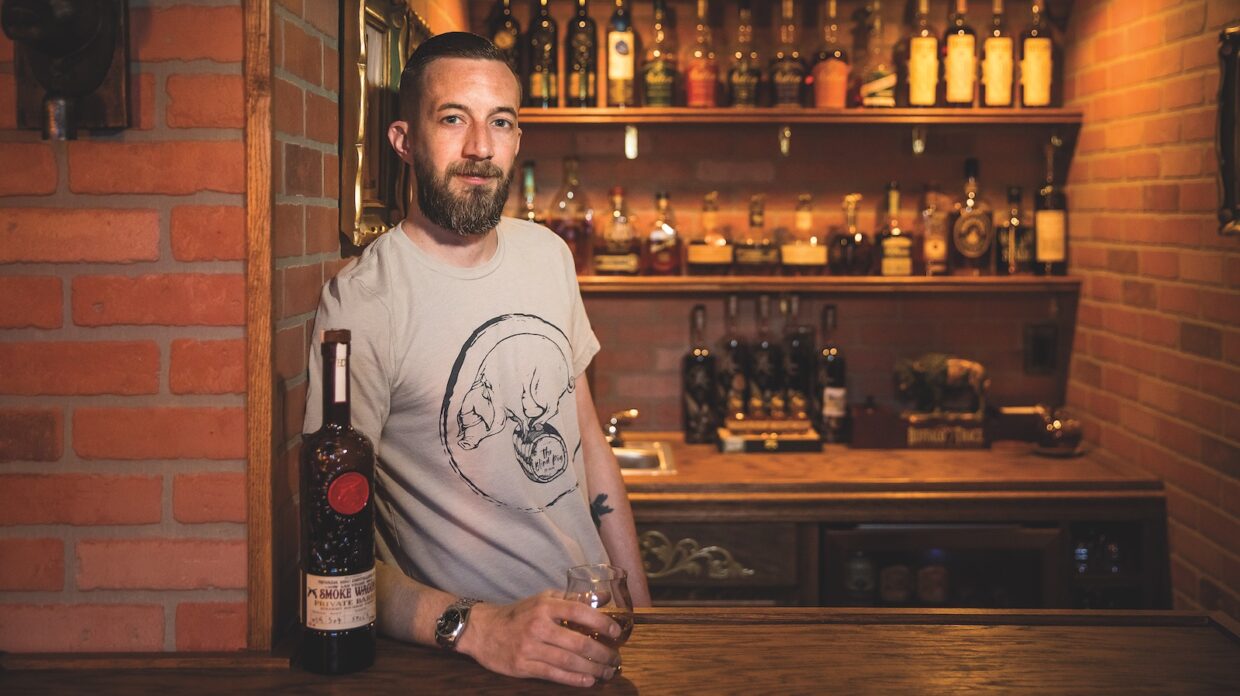 Shut out of bars by the pandemic, whisky lovers are bringing their passion to life in their own homes by building whisky rooms. Fusing the functionality of a cellar with the atmosphere of a club, whisky rooms are a space not only to store your whisky, but also to hang out and sip. They come in all shapes, styles, and sizes.

“I had a very specific feel I wanted for my room—something with a very early 20th century-hotel feel to it,” says Nicholas Pagan, who finished his whisky room at his home in Morgan Hill, California last August. His space, which he calls “The Parlor,” has early 1900s hotel-style furniture sourced from online retailer Wayfair to suit the space and aesthetic.

Pagan had a fairly easy time procuring the furniture, which was all brand new. “I would have loved to use antiques, but the budget didn’t really allow for that,” he said. While the furnishings proved simple to acquire, Pagan did encounter some issues with shelving. “None of the shelving came with guardrails, and since we’re in earthquake country, that was an absolute must,” he says. To resolve this issue, Pagan turned to Pinterest, where he found a photo that looked similar to the guardrail shelving he wanted. “More out of necessity than want, I built all the shelving out of ½-inch steel pipe and wood, which I stained to give it an aged look,” he adds. The parlor look that Pagan wanted shines throughout the room, with its burgundy armchairs, classic wooden chess set, and crystal decanters for some of the whiskies. That decor is embraced by walls of whisky, prominently displayed on those shelves Pagan built himself. 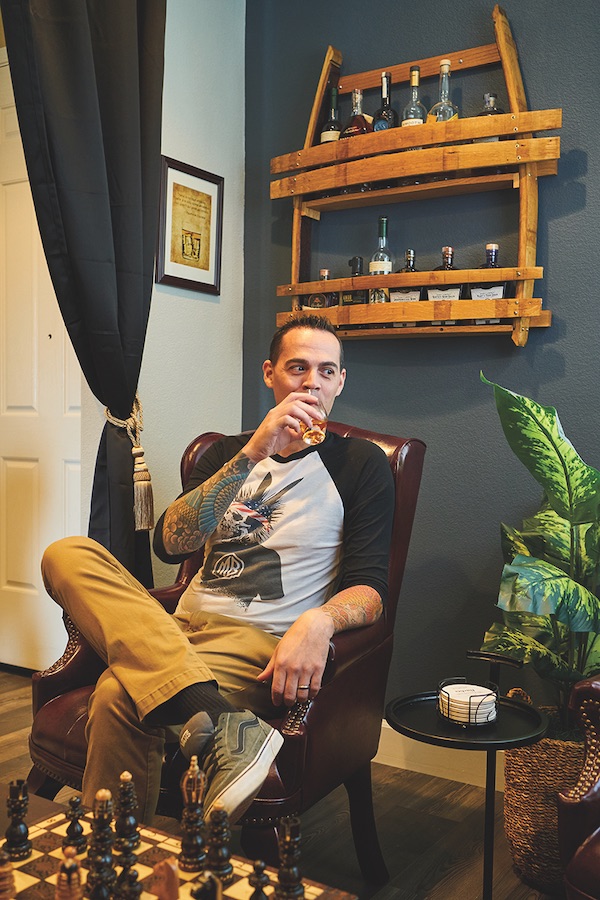 Nicholas Pagan sips whiskey in his custom whiskey room which he dubbed The Parlor. (Photo by Stan Olszewski/SOSKIphoto)

Show Off Those Bottles

Pagan’s concern over shelving was well placed. In any whisky room, the shelving is not just a means of storing and displaying whisky—it’s the focus of the entire space. Many people want to store their whisky standing upright so all the bottles can be seen, notes Jim Cash, founder of Revel Custom Wine Cellars in East Lansing, Michigan. That method is also important for preservation, because the cork influence can seep into a whisky when it’s stored horizontally.

“In a wine cellar, the wines are laid down, but in a whisky cellar, the bottles will have more visibility,” says Cash, adding that a whisky room needs wall space that goes high rather than deep, as required for wine. He recommends using glass for the room’s external walls so the whiskeys are visible from an adjacent space, where you might be shooting pool or smoking cigars.

When Pagan and his wife Chelsea were searching for their home last spring, he was already thinking of a dedicated space for storing and sipping his whisky. “As we were looking at each location, I was building the room in my head,” he said. “Things like direct sunlight, temperature changes, size, and space became part of our house-buying decision.”

Factors that Pagan considered in his house hunt are similar to those of professional cellar designers. In terms of climate control, Cash notes that a home whisky room will have more flexibility than with wine. “We’re always shooting for something at approximately 55 degrees and 70% humidity [for wine], and that’s not necessary for whisky,” Cash says.

Since a whisky room will be a place where people spend a good chunk of their time, Cash emphasizes the importance of aesthetics. He starts by asking clients about the style of their home, and then poses additional questions about what aesthetics they prefer. “Generally, they will know something, or have something to offer as inspiration, and we take it from there,” he adds. In his designs, Cash often incorporates artwork and memorabilia his clients wish to showcase, and that can help establish a theme.

Pro Tips for Building Your Own Whisky Room

In Weston, Massachusetts, Baljit Gill had a clear aesthetic vision for his whisky room: a library theme. “My wife and I designed the room ourselves and knew what type of material we needed, though the actual build was done by a local carpentry company,” Gill says. Wood was central to the theme, and the hardwood they used for the space had some structural benefits as well. “I knew the weight of the bottles would be a challenge, so we went with the hardest wood possible,” Gill notes, adding the room’s wooden bottle encasement is made of hardwood and is a heavyweight all on its own. “It weighs 6,000 pounds [without the bottles] and sits on a metal frame, six inches above the ground.”

Gill’s grand bottle display and storage cabinet sit against a wall, but it’s certainly a strong focal point. A table in the center of the room is built atop whisky barrels, and a library ladder adds a thematic touch, as well as being a functional tool for reaching bottles in the overhead spaces. Creating this elaborate storage capacity was a necessity, as Gill’s bottle collection is an impressive one. “I have around 1,200 bottles, split between single malts, pure malts, some bourbons and rye, and a few blends,” he says. Gill also keeps around 400 bottles of wine. His whisky room has a wine refrigerator, but his next project is to add a wine wall. 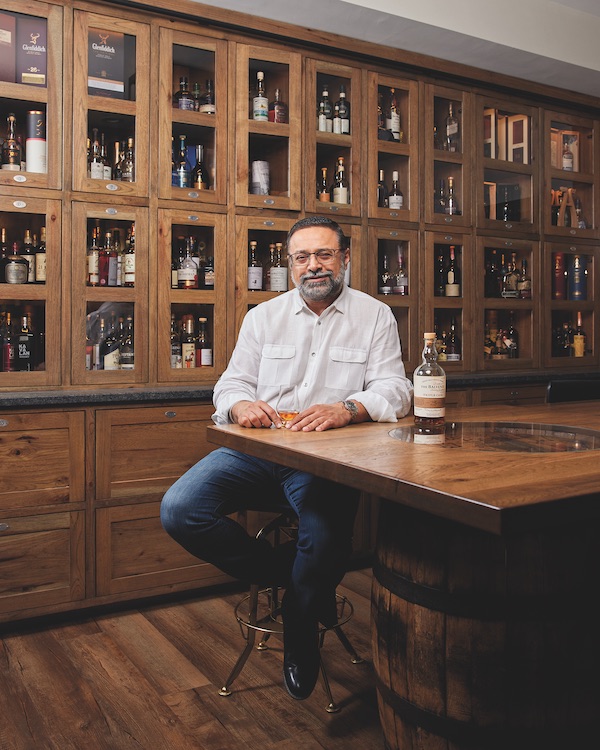 Baljit Gill constructed a library-themed whisky room in his Massachusetts home that showcases around 1,200 bottles. (Photo by Joe St. Pierre)

The large wooden encasement for Gill’s bottles looks a lot like a bookshelf, which underpins the whisky library theme. It also boasts a major benefit: security. “The locking system is biometric-driven, and only my wife and I have access to it,” Gill says, adding that this feature was custom-designed. He and his wife have two children, and as the kids grow up, the parents want to ensure that “all the alcohol is in one confined space and in a controlled manner,” he says.

A Place To Hang

Cash emphasizes that a whisky room can be whatever a client wants it to be. His company has designed tasting spaces that feature a whisky barrel in the room, he says. “You can really go wild if you want to,” he adds. For Pagan, relaxation is the name of the game. “My room is quiet and cozy,” he says. “Whenever we have guests over, it’s a very popular place to hang out. I plan on having my poker nights in there, once I can safely do so again. But even with just one person visiting, it’s a great place to just sit and catch up.”

With around 500 bottles in his whisky room, Pagan and his friends like to enjoy a dram or two while they catch up. “Being a collector for nearly a decade, I have accumulated a few pretty special bottles,” he says. Some of his more prized additions include Green Spot 26 year old, Mister Sam Tribute whiskey, Blade and Bow 22 year old, Heaven Hill 14 year old, 1792 225th Anniversary Edition, and Caol Ila 20 year old Artist Collective, which he got on a trip to Paris with his wife. “What’s great about having this room is being able to go in, scan the shelves, see something I haven’t tried in a while, and go for it,” Pagan says. He opted not to include a television or any other distractions so he and his guests can focus on conversation, although there is a chessboard if visitors are interested.

At Joe Hayhoe’s home in Urbandale, Iowa, the whisky room has an interesting twist: it’s a secret space in his basement, behind a door that looks like a simple shelving unit. That door leads into Hayhoe’s personal speakeasy—dubbed The Blind Pig—that also houses his whisky collection. “It came about when my love of whisky collided with my wife’s love for having counter space in the kitchen,” Hayhoe jokes. “A few buddies and I were sitting around enjoying a drink, the thought of building a basement speakeasy came up, and it snowballed from there. I began mapping out the space and all the changes that would be needed.”

The Blind Pig came together in about two and a half months, with the Prohibition theme centered around artwork and memorabilia—including framed original Prohibition-era liquor prescriptions purchased on e-commerce website Etsy, an original 1933 newspaper cover of the Chicago Daily Tribune with the headline “Iowa Votes for Dry Repeal” from eBay, and other non-original Prohibition artwork Hayhoe found online. Exposed brick walls enhance the speakeasy theme, and there’s a small bar where guests can sip while listening to the record player or playing at the dartboard. 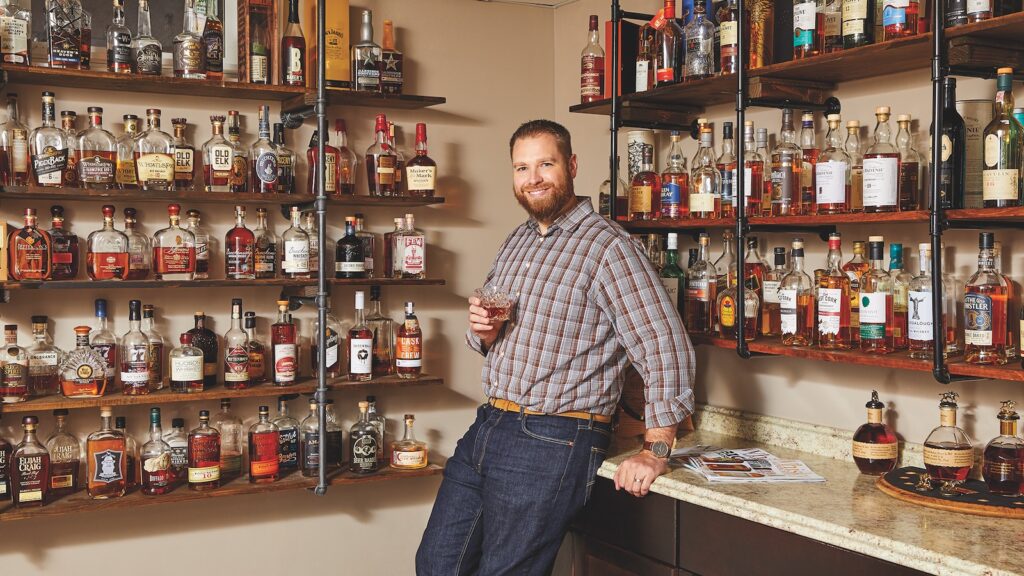 Jefferson’s Tavern is the name of Brian Latwis’s whisky room. It’s a space he created to display his 300 whiskies, gather with friends and family, or just relax with a pour. (Photo by Rachel Vanni)

A Tavern At Home

Brian Latwis of Bayville, New Jersey had a whisky collection that once occupied just a couple of bookshelves, but eventually grew to need an entire room. Latwis built his home whisky room in the theme of an old-style tavern. In keeping with that idea, the space offers ample places for setting down your dram—a counter, a table, a bar with several stools, and a small table made from a whisky barrel that bears the room’s name: “Jefferson’s Tavern Bourbon & Cigars Est. 2014.” While the bottles occupy most of the wall space, there’s room for a quote painted on the wall that reads, “You can’t buy happiness, but you can buy whiskey, and that is pretty close.”

Though not facing earthquake concerns like Pagan, Latwis found it challenging to make sure the gas-pipe shelving was secure. He didn’t simply hang the shelving on the wall; instead, he mounted it directly to the wood framework of the room. “I made sure the gas piping was mounted directly to the ceiling joists and into the studs in the wall,” he says. “But I also reinforced each gas pipe with wire directly attached to the ceiling joists. There are a lot of bottles on each shelf, so ensuring the shelving could handle the weight was my number-one objective.” All of Latwis’s hard work paid off, and he now spends time in his whisky room every day. It’s home to the wide variety of whiskies in his 300-bottle collection, which includes many expressions from Buffalo Trace, such as Weller Full Proof, Eagle Rare 17 year old, Stagg Jr, and Blanton’s. The collection also includes Jefferson’s—one of his favorite bourbons and inspiration for the room’s name. “I named this place Jefferson’s Tavern because Jefferson’s is one of my favorite bourbons, and also because I live on Jefferson Avenue,” he says.

Like others with their whisky rooms, Latwis enjoys connecting and relaxing with friends and family in his personal tavern. “I love whisky, but it’s about more than just the whisky,” he says. “I go there to socialize, relax, unwind, and to look at the bottles. It is a great place to …enjoy whisky with others. When I have company, it is fun to just hang.” He adds that the room has been especially helpful during the pandemic, as it creates an atmosphere of being out while he’s still at home. But the room’s best decor seems to be the whisky itself. “The whiskies on these shelves are like photographs on a wall, representing different moments in my life,” he says. “I can remember where I bought them and who I’ve poured them with. Those bottles are connected to memories—it’s like looking at pictures. I love to have a glass and get lost in thought.” 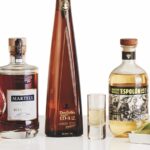 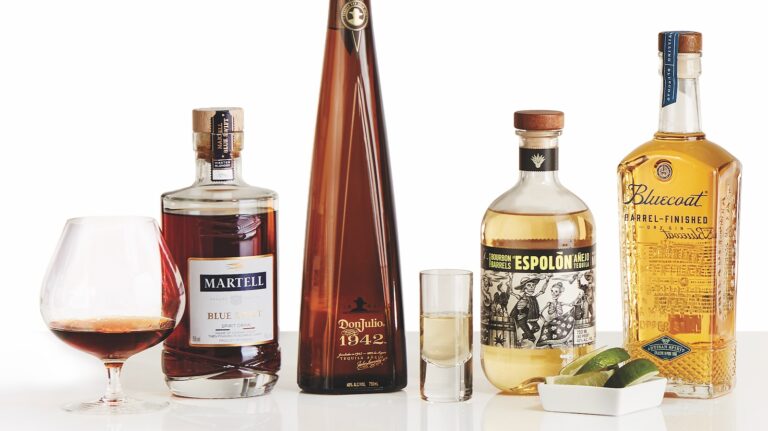 This collection of cognac, rum, tequila, gin, Cachaça, and wine will give you and your guests the full barrel-aged experience. 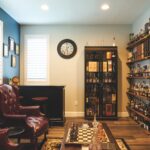 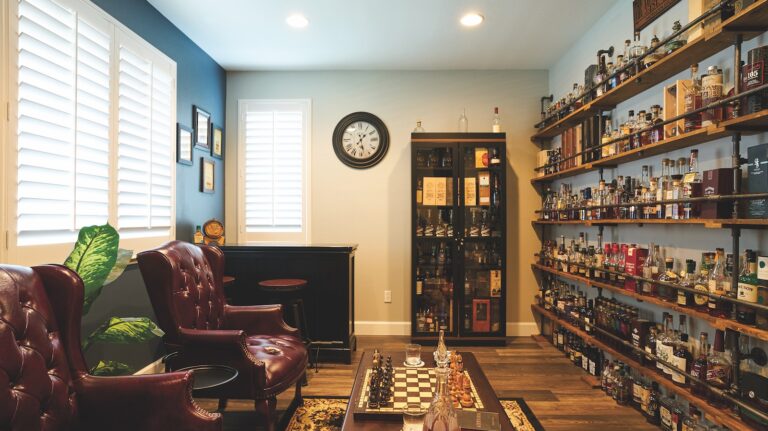 Use these tips from someone who build wine cellars and whiskey rooms for a living to get started on your own. 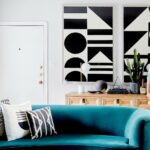 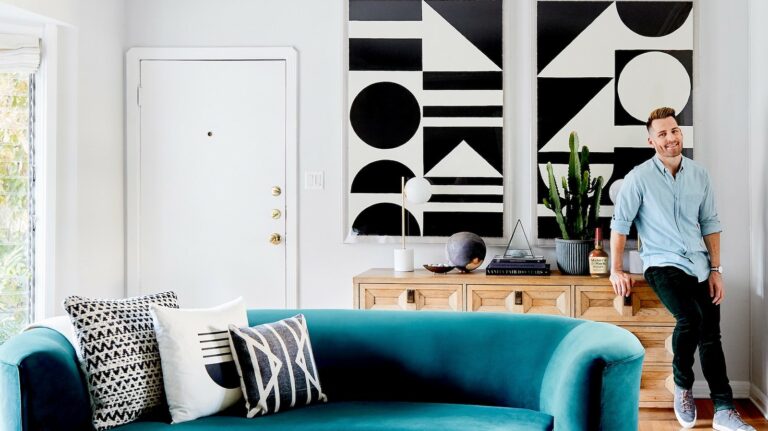 The HGTV star and celebrity interior designer shares his tips for how to style and stock your best bottles.