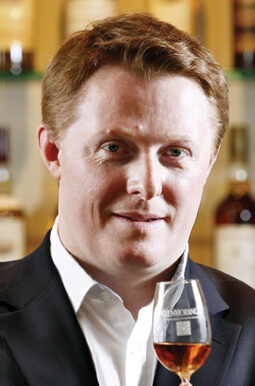 Global Brand Ambassador David Blackmore represents the Single Malt Scotch brands of The Glenmorangie Company throughout the world, in Asia, North America and in his home country of Scotland.
As this primary focus, David leads the Glenmorangie and Ardbeg educational and ambassadorial team in the USA, exciting and educating the industry and consumers on the nuances of Glenmorangie and Ardbeg Single Malt Scotch Whiskies through tastings and events across North America.
A native of Scotland, born and raised in Edinburgh, David is an experienced professional whisky tutor, and member of the prestigious Glenmorangie Company Whisky Creation Team. With a background at the Scotch Malt Whisky Society in Scotland and London and a sophisticated nose, David formerly led The Society’s prestigious “Tasting Panel” in selecting casks for bottling.
A U.S. based Brand Ambassador since 2005, David has been named “Scotch Whisky Ambassador of the Year” an unprecedented three times by Whisky Magazine. He has also named “2014 Brand Ambassador of the Year” by the International Whisky Competition.
In 2014 David was honored to become a member of the prestigious Keepers of the Quaich Society at a ceremony in Blair Castle deep in the heart of the Scottish Highlands.