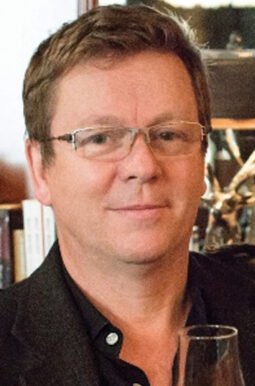 “World peace thro’ whisky one dram at a time.”
Born in Edinburgh, Scotland, and a member of the Robertson Clan, Simon traces his roots back to the 13th Century and the Celtic Earls of Atholl.
A well-known expert on Scotch whisky, Simon has worked for many of the leading Scotch distilleries, learning the art and science of distilling from the world’s foremost master distillers and blenders.
Simon’s love of Scotland’s Highlands and Islands has paved the way to his present position as the Beam Suntory Scotch Ambassador for Laphroaig, The Ardmore, Bowmore, Auchentoshan and Glen Garioch Single Malt Scotch whiskies.
When not in the air or in a bar, Simon resides in Brooklyn NY with his wife Sheila and their free range chickens.