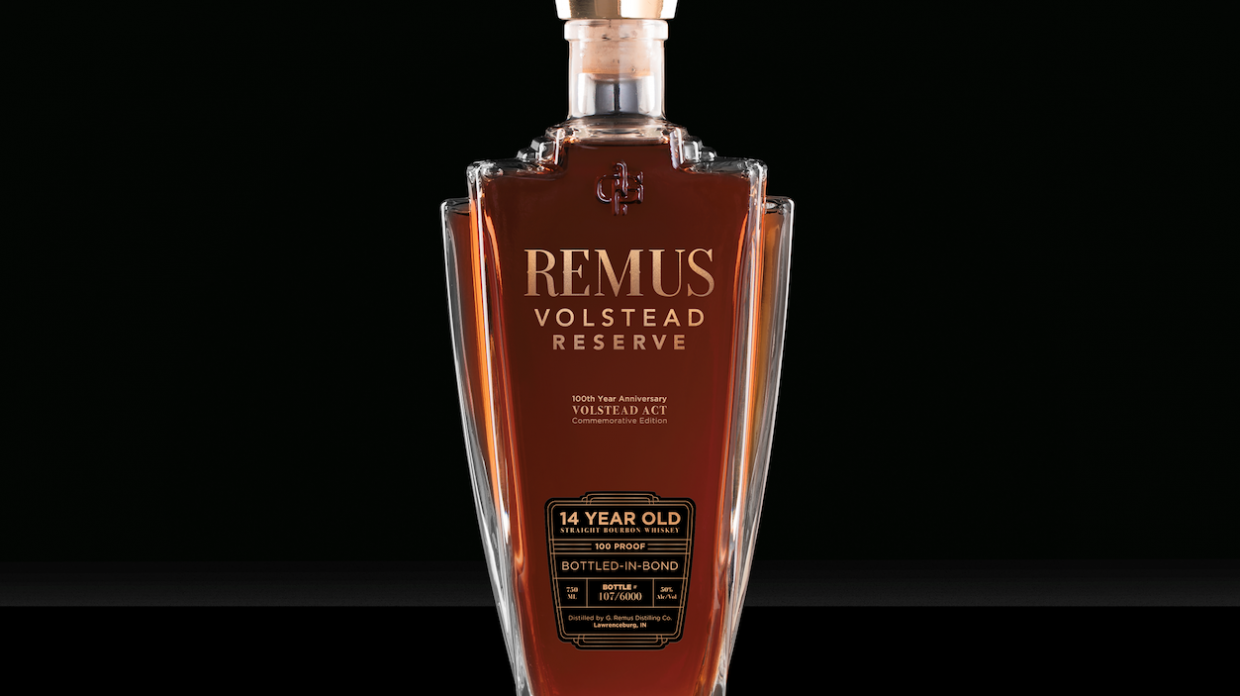 Indiana’s MGP Distillery will launch its first bottled in bond bourbon this November under the George Remus label. The whiskey’s end-of-year debut coincides with the 100th anniversary of the enactment of the Volstead Act, which carried out the 18th Amendment outlawing alcohol production and distribution in the United States.

Remus Volstead Reserve straight bourbon was distilled in the fall season (July-December) of 2005 and matured in MGP’s brick warehouses in Lawrenceburg, Indiana. Like all bottled in bond whiskeys, it is 50% ABV. However, at 14 years of age, it far exceeds the minimum 4 years required for bottled in bond whiskey. The bourbon is packaged in a decanter bottle and commemorative box designed to evoke the Art Deco era of Prohibition, when namesake George Remus operated a notorious bootlegging ring. Preliminary tasting notes reveal aromas of honey-roasted peanuts and pecans, blueberry-pomegranate juice, and baking spice. The palate is soft and fruit-forward, with chocolate, nuts, and drying oak—understated in spite of the 50% ABV.

MGP is well-known to American whiskey drinkers as a supplier of high-quality bourbon and rye for dozens of other brands, and the release of Volstead Reserve underscores its commitment to drawing upon its expansive inventory to build its own stable. “We want to continue to explore what Art Deco and Prohibition were all about in American history,” says MGP vice president of brands Andrew Mansinne. “And with our reserves of bourbon, we can have some fun doing that.” The whiskey’s 14 years in barrel nearly mirror the length of Prohibition, which lasted from 1920 until December 1933, but Mansinne notes that this was purely coincidental. “The moon and the stars aligned and we said, what better opportunity than to [use these barrels for] Volstead?”

Like the other expressions in the George Remus lineup—which includes the flagship George Remus straight bourbon (86 points) and the annual special-edition Remus Repeal Reserve (92 points for 2018’s Series II)—this whiskey was assembled by senior master blender David Whitmer, whom Mansinne describes as instrumental to the brand’s identity. “He has been on our brands team since day one,” says Mansinne. “He was at the tiller when we came to him with [the idea for] Volstead Reserve.”

Remus Volstead Reserve is a one-time-only release. Just 6,000 bottles, priced at $200 each, will be available in 14 states (Arizona, Colorado, Illinois, Indiana, Kansas, Kentucky, Minnesota, Missouri, Montana, Nebraska, Ohio, Tennessee, Texas, and Wisconsin). While this bourbon will not be repeated, Mansinne says Remus fans can look forward to other limited-edition whiskeys in the future. “As we find some pretty cool barrels and as we find opportunities that are historically significant, we will come out with these one-time things,” he says. “Whenever we can find an opportunity, we’ll take advantage of it.”

The Bardstown Collection, a series of limited-edition bourbons, will go on sale this September.