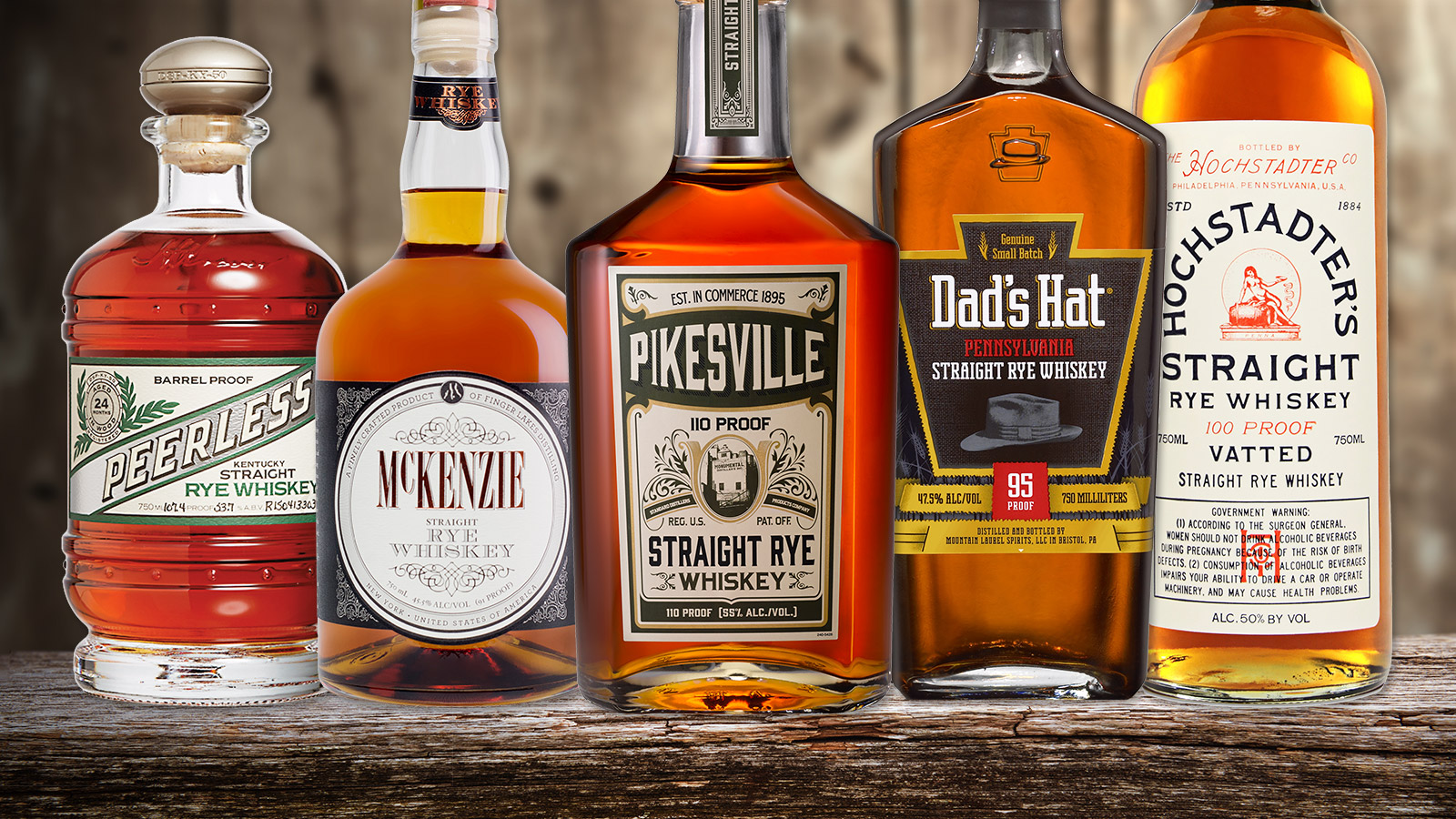 Rye has been a part of America’s distilling heritage since colonial times, yet gets only a fraction of the recognition of its better-known sibling, bourbon. For a time in the late 20th century, whiskey distillers barely made any rye at all, and finding a bottle on the shelf of a liquor store could be a challenge. But in recent years, rye has made a comeback, and whiskey lovers are discovering (and rediscovering) how delicious it is.

Bourbon has to be made of at least 51% corn, and similarly, rye has to contain 51% rye grain at a minimum. However, while bourbon must be made in America, and is most often associated with Kentucky, rye can be made anywhere, and different regions in North America have their own unique claim to it. If a rye is labeled as “straight,” it has been aged at least two years in a new charred oak barrel; if it’s not straight, it might be younger than two, may have been aged in a used or new toasted barrel, or could have up to 2.5% added flavoring or coloring.

There’s a vast and sometimes unexpected breadth of flavor possibility in a rye whiskey. Many whiskey drinkers these days associate rye character with the ubiquitous 95% rye that has long come from MGP Distillery in Indiana, which provides whiskey to numerous small producers and brands. While MGP’s mashbill makes for a delicious whiskey, there are many other flavor profiles found in this complex spirit: robust, fruity, rich, and spicy. And thanks to its diversity, rye can be enjoyed neat, with water, on the rocks, and in cocktails like the Manhattan and Sazerac.

There are so many types of rye to try. Start with these key examples.

James E. Pepper 1776 Rye—85 points, $27
A quintessential example of the rye made at MGP with a 95% rye mashbill, this whiskey also benefits from being cheaper that many other sourced bottlings. The distillery’s signature minty and herbal notes come through strong on the nose. The palate is equally herbal, with a brassy, rye-bitter finish. An aggressive rye whiskey, fine for sipping neat, but perhaps better cut with ice or water.

Hochstadter’s Straight Rye Whiskey—87 points, $35
This is an intriguing blend of five straight ryes of various ages and from different locales. The whiskeys range from 4 to 15 years old, and span the continent from Canada down to Kentucky, Pennsylvania, and Indiana. A bitter nose leads into a grainy palate that is not too spicy, more redolent of warm apple cinnamon. Well-priced, it’s a great starter rye due to its candied sweetness and drinkability, despite being 50% ABV.

Pikesville Straight Rye—89 points, $50
Youthful and loud, this 6 year old rye is a real heater at 55% ABV. Meant to be representative of the historic Maryland-style rye, today it is produced in Kentucky at Heaven Hill. Scorching on the nose, the palate is equally sizzling, with a grainy spiciness balanced by hints of brown sugar. A real rye lover’s whiskey, its raw, grassy flavor will linger long after finishing a glass

Kentucky Peerless Straight Rye—91 points, $125
Rye is a perfect niche for craft whiskey distillers, as it often drinks well at a younger age than many bourbons. A revival product for a once-prominent distillery that closed due to Prohibition, this youthful rye makes a splashy entrance. A fruity, tropical nose leads into a bold and peppery palate. The high proof—53.7% ABV—means it’s a tad hot, but a splash of water softens that and unlocks baking spices and anise on the finish. Whisky Advocate’s blind tasting panel ranked this rye number 15 in the 2017 Top 20 Whiskies of the Year.

Jack Daniel’s Single Barrel Rye—90 points, $50
While Tennessee whiskey technically meets the standards for bourbon, with the addition of filtering through maple charcoal (aka the Lincoln County Process), there’s nothing stopping Tennessee distillers like Jack Daniel’s from making rye using the same technique. With a mashbill of 70% rye, 18% corn, and 12% malted barley, this single barrel rye has a “bourbony” nose with notes of brown sugar and Werther’s Original. The palate is more true to form, with the taste of rye bread topped with butter and cinnamon, the latter offering a spicy zip on the finish.

Dad’s Hat Pennsylvania Straight Rye—85 points, $60
A foray into another historical type of rye, this Pennsylvania distillery’s flagship whiskey was the first new Old Monongahela-style rye to be released in more than a century. Made using local Pennsylvania grains, it has a singular floral and grassy nose and a highly assertive palate. While true Old Monongahela rye is still an artifact, this nouveau example is a great first step into reviving the style.

Finger Lakes Distilling McKenzie Straight Rye—89 points, $42
In 2017, several New York craft distillers set out a slate of standards to define a new style of rye whiskey made in the state. This straight rye was among the best of the bunch, not the least because it has a good amount of age. A spicy, cinnamon, and cardamom nose leads into a palate with more herbal notes like dill and oregano. The finish has cloves and orange peel, with a lingering minerality, perhaps from the upstate water employed. Check out the Spring 2018 issue of Whisky Advocate for more Empire Rye reviews.

WhistlePig 10 year old—87 points, $67
Although it has a strict definition as an American whiskey, rye need not even be made in the U.S. In fact, our neighbors to the north make a lot of rye, though much of it is used in blended Canadian whiskies. WhistlePig, based in Vermont, gets its 100% rye whisky from Alberta Distillers, where it was traditionally used for blending. The bulk rye is put into once-used bourbon barrels when it gets to Vermont. The result is a whiskey that is citrusy and somewhat herbal on the nose, leading into a sweeter-than-expected body—butterscotch and vanilla, balanced a bit by dark chocolate, leather, and woodiness.

Reevaluate your relationship with these affordable bottles that you may have encountered early on in your whisky journey.

These 100 proof whiskeys deliver high quality at a higher, yet approachable, ABV.

Whether you are celebrating a birthday or another special occasion, you can’t go wrong with any of these 21 year old whiskies, all of which scored 90 points or more in our Buying Guide. This