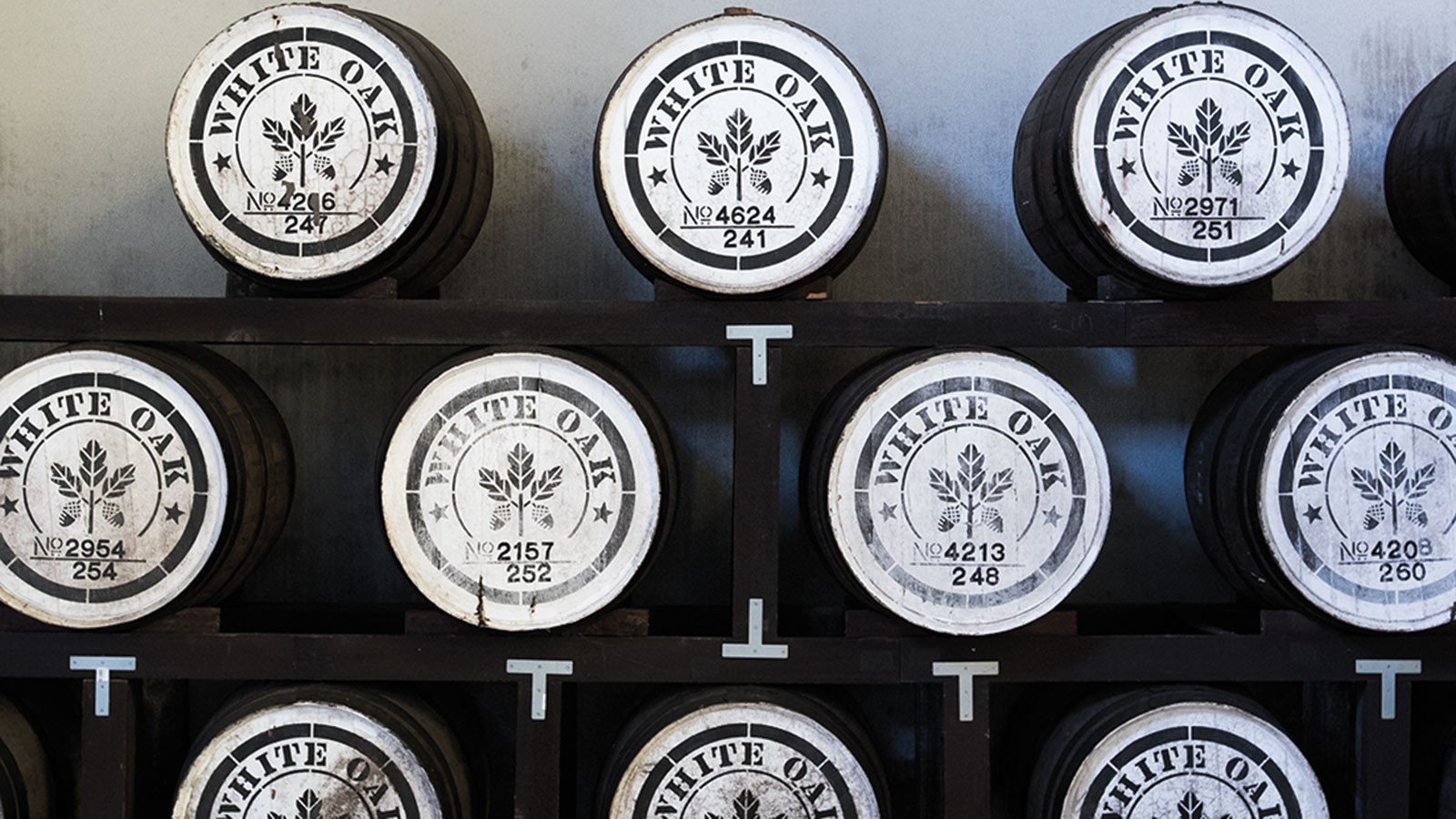 White Oak Distillery is located at the Akashi Strait. The company started in 1888 as a pure sake producer.

Between forests, mountains, and a wide river, Japan’s Mars Shinshu Distillery in Nagano is making whisky at full capacity again after taking a short break—for nineteen years. In 1989, a tax reform forced Japan’s distillers to nearly double whisky prices. Many small Japanese distilleries either reduced their production or closed down entirely. While it seems hard to imagine today, there was so little demand for whisky that in 1992 Mars Shinshu abandoned whisky completely in favor of brandy. The now legendary Karuizawa and Hanyu Distilleries were able to hang on until the turn of the millennium.

Now, Mars Shinshu is just one of at least ten small distilleries to join the nation’s leading distillers—Suntory and Nikka—as silent distilleries come back to life and new passion projects emerge. The movement spans the country, from the island of Hokkaido in the north where the new Akkeshi Distillery is embracing the cold coastal climate, to Kyushu Island in the south, home to Japan’s most southerly and newest distillery, Mars Tsunuki. A whole new diversity of Japanese craft whisky is on its way.

Craft distilling is well-rooted in Japanese history. Even Japan’s large distilleries started as relatively small endeavors. And without Shinjiro Torii and Masataka Taketsuru, the forefathers of Suntory and Nikka respectively, it is hard to imagine what Japanese craft whisky would be today—if it would exist at all. Torii established the Yamazaki Distillery in 1923, with just two stills. Taketsuru, who gained detailed knowledge about Scotch whisky through his travels in Scotland, became responsible for production. In 1934, Taketsuru opened Yoichi Distillery in the northern prefecture of Hokkaido. The similarities to Scotland’s climate and the availability of local peat made it an ideal location. Yoichi also started off small, with only one Japanese-made pot still—today it features six charcoal-fired stills of which two can be converted to steam-heated.

Interestingly, Taketsuru indirectly contributed to Shinshu Mars. In 1920, he submitted his Taketsuru Report, containing his detailed notes from his education in Scotland to his boss, Kiichiro Iwai. Later, Iwai used these notes to design Shinshu Mars’ first pot stills. “Iwai’s pot stills were used until 2014, but since the copper had decreased to about 1 mm, they were recently replaced by replicas made by a Japanese company called Miyake,” explains Shinshu Mars’ current distillery manager, Koki Takehira.

Despite the devastation of World War II, whisky sales rose during the war and post-war era in Japan, due to both increased domestic consumption among Japanese military forces and at the American military bases that were spread out across the country after the war. Over the decades, these small players became big and changed their names, with Yoichi and Yamazaki becoming part of Nikka and Suntory respectively. Both companies were similar in terms of size and artistry to today’s craft movement before evolving into successful large-scale producers as the market expanded.

During the ’70s and ’80s, as international whisky’s presence grew in Japan, Nikka and Suntory accordingly pushed the quality of their whiskies ever higher, namely by increasing the percentage of flavorful malt whisky in their blends. The whisky struggles of the 1990s impacted them as well, but they had the financial muscle to withstand the recession that crushed the craft distillers, until a second tax reform in 1996 lowered the whisky tax by 58 percent and initiated the long, slow return to prosperity.

Japanese whisky remained a bit of an international footnote until the start of the new millennium. In 2001, Karuizawa Master’s Blend 10 year old won a gold medal at the International Wine and Spirits Competition. The message echoed around the world and Japanese single malt whisky was soon on the radar of foreign enthusiasts and investors. 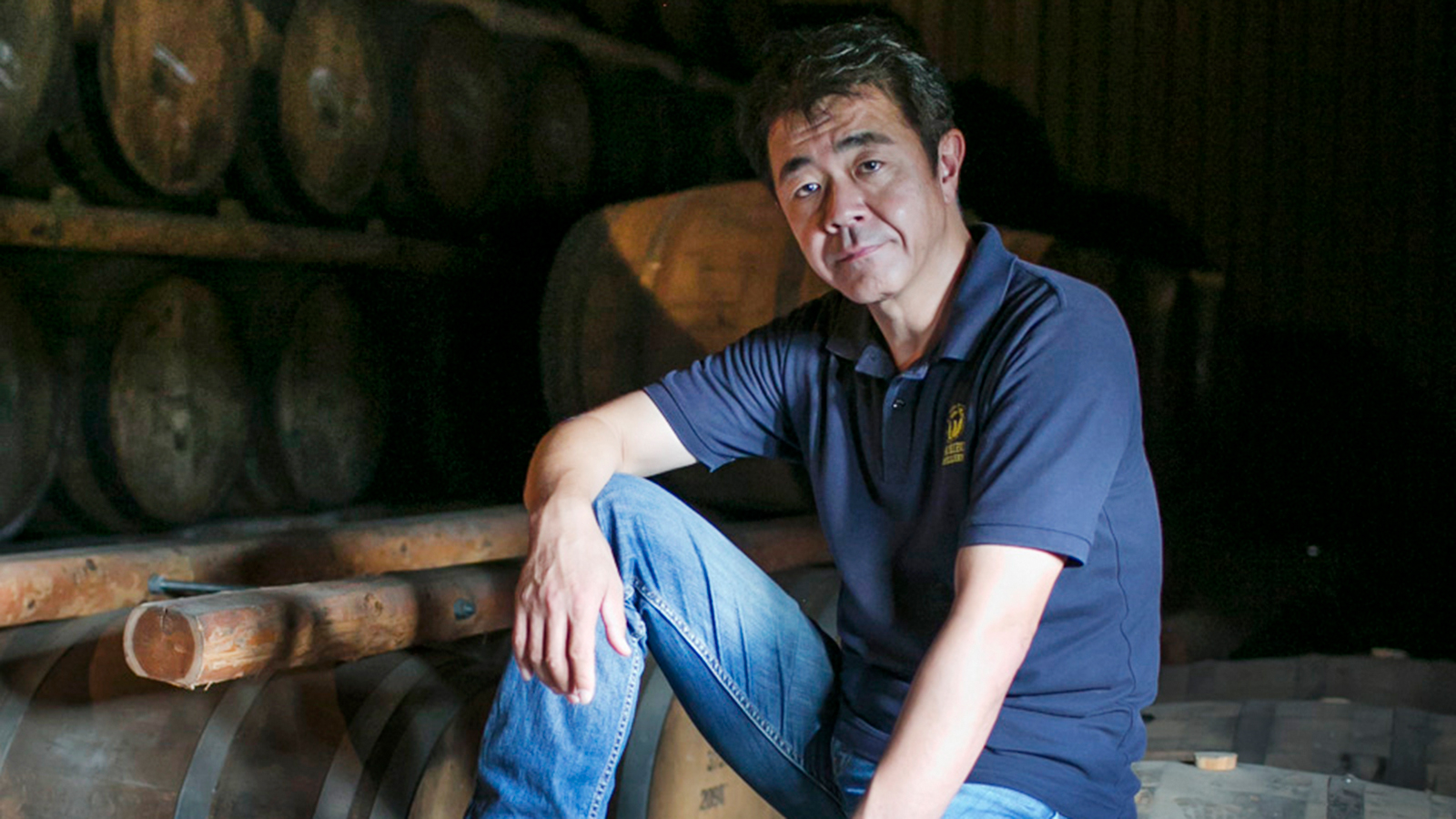 It took much longer, however, for the Japanese to come to appreciate their own national whisky treasure. Japan’s whisky consumption steadily declined until finally bottoming out in 2007, when the comeback of whisky Highballs (a mix of whisky and soda) began to turn the tide. It was Suntory that nourished this new wave by reintroducing the bottled Highball in 2008, followed by a canned version that became a huge success among younger drinkers. The Highball became the drink of choice in small pubs, or izakayas, even available in vending machines in train stations, and today you can find it pretty much everywhere in Japan.

Before long, the demand for Japanese whiskies quickly overwhelmed supply. Standard bottlings like Hakushu 12 year old became scarce in Tokyo’s liquor shops. In 2015, when Nikka ceased production of most of their Yoichi and Miyagikyo range to focus on non-age statement whiskies, the older age statement bottles practically became collector’s items overnight. The limited stocks of whisky from the closed distilleries of Hanyu and Karuizawa soared in popularity around the same time. In 2011, Number One Drinks Company managed to acquire the remaining casks of Karuizawa and rode the wave of collectibility started by Karuizawa and Hanyu over the next four years, as the value of the whiskies nearly quintupled at worldwide auctions.

The stocks of aging whisky at Hanyu, several hundred barrels, had been sold off in 2004, ironically to a company that seemed completely uninterested in malt whisky. Ichiro Akuto, the son of former owner Yutaka Akuto, witnessed the sale while working for Yamazaki at the time. “I really liked the whisky and some of the casks were approaching 20 years [old]. It felt like my own children and I couldn’t stand seeing it happen. So, I decided to quit my job, start a company, take over the stocks, and begin making my own whisky,” says a suited Akuto, sitting on a barstool at his chalet-style office building next to Chichibu Distillery. 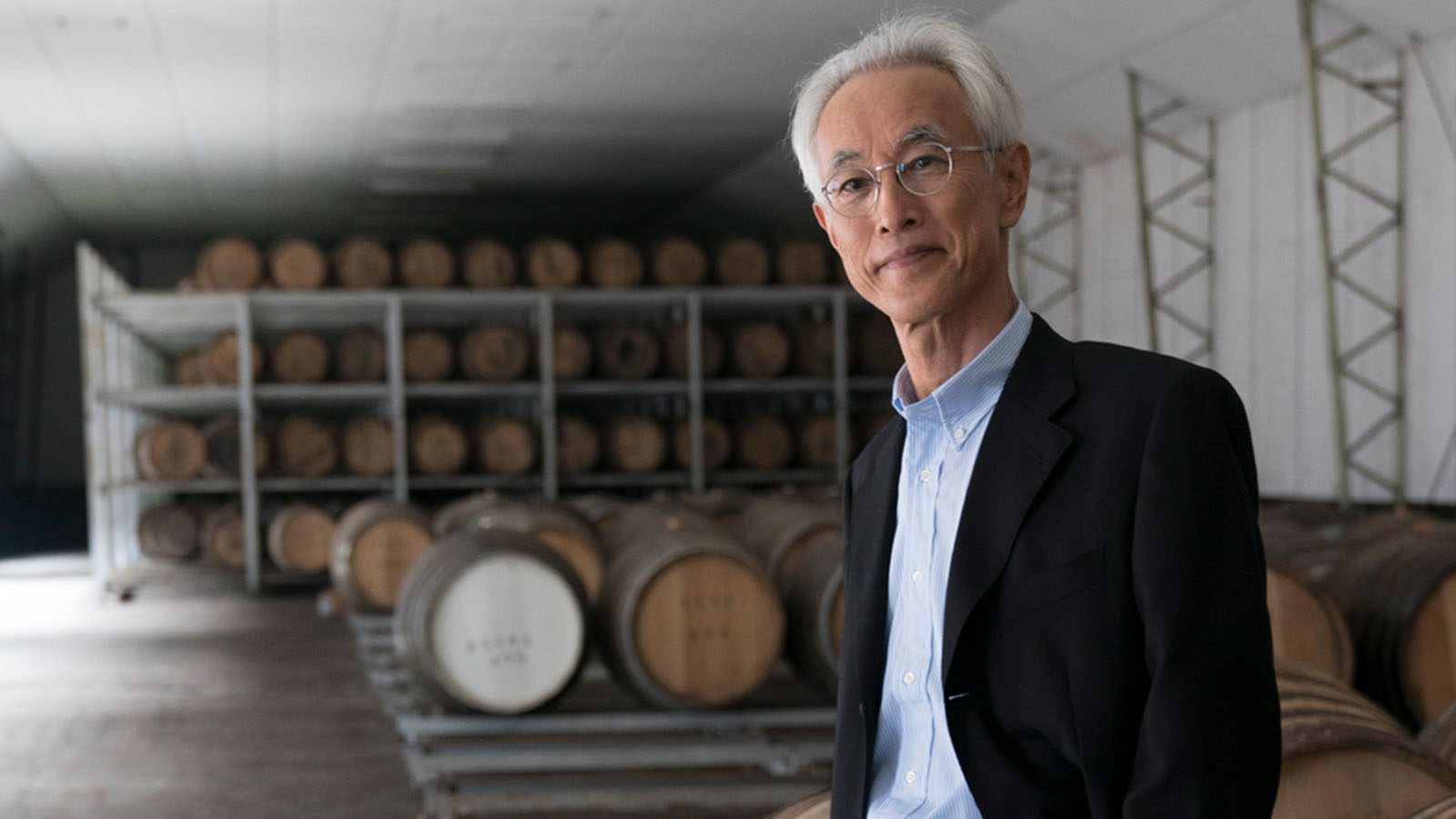 The well-timed acquisition resulted in the release of Ichiro’s Malt Card Series—54 different bottlings of Hanyu whisky—a profitable endeavor that helped Akuto fund his new Chichibu Distillery. However, the old pot stills from Hanyu were too derelict to be rescued. Instead, Akuto ordered two custom-made stills from Forsyths of Scotland. He purchased eight 3,100-liter wooden washbacks, made from rare Mizunara oak, from an acquaintance. The grain mill arrived along with Scottish malt and the first batch ran off the stills in early 2008. Malolactic fermentation, the process that converts malic acid to lactic acid, creating a softer and creamier taste, is often used in winemaking. At Chichibu it also occurs in the wash that is distilled into whisky. “The first time I got the wooden washbacks I realized that it breathes and has lactic acid bacteria. And since these bacteria give more of a fruity character to the wash I decided to use wooden washbacks,” says Akuto.

Much like their counterparts in the U.S. and Ireland, Japanese craft distillers seek to offer something different, emphasizing local, traditional, or creative takes on whisky. Akuto’s ambitious goal is to create a whisky made entirely with Japanese ingredients. He has partnered with local growers in the Saitama prefecture to source domestic barley and he regularly travels with his employees to England to study the art of traditional floor malting, where the drying barley is turned by hand. “For nine years in a row we have been training. Now we occasionally do the floor malting in-house and I can assure you that it is a good workout,” Akuto says with a smile.

The quest to distill a genuine Japanese whisky also takes Akuto to Hokkaido to bid on top-quality oak for cask making at the highly competitive timber auctions. “American oak has a lot of vanilla and honey, whereas European oak gives more of a robust and spicy character. From the Japanese Mizunara oak we get both spices and sweetness, but also some kind of taste of incense. We usually call it the ‘temple flavor,’” he explains.

Japanese craft whisky producers have seized new opportunities while their larger counterparts focus on meeting demand and maintaining the quality of their non-age statement whiskies. “The reason why some companies release non-age whiskies—using stock that could be also released as small batch whiskies and single cask whiskies in the future—is probably to stabilize the quality of their products with a wide range of stock. Compared to other producers, we produce whisky rather at a small scale, so it is much easier for us at Mars Shinshu to release whisky as small batches and single casks,” says distillery manager Koki Takehira.

White Oak Distillery is another craft producer seeking to satisfy whisky consumers with whiskies the big players currently are unable to provide. Located at the Akashi Strait not far from Kobe, White Oak started out in 1888 as a pure sake producer but now offers an array of whiskies with a focus on small batch and single cask releases. According to president Mikio Hiraishi, White Oak is responsive to customer requests and suggestions and will soon release red wine cask-finished whisky in the U.S. 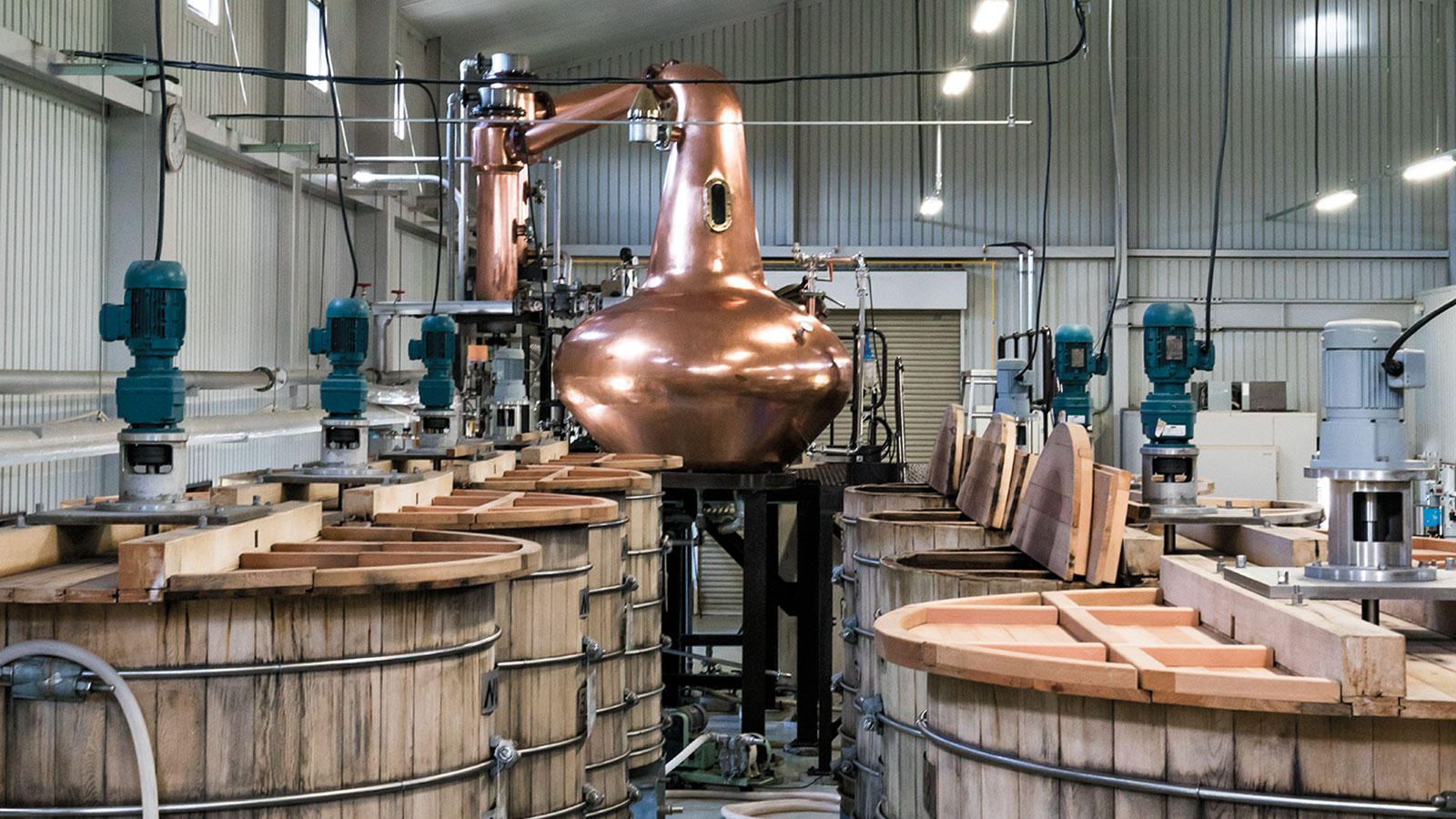 Mash tuns and pot still at the Chichibu Distillery.

In the last few years, the small troop of Japanese craft distillers is expanding rapidly, joined by Shizuoka Distillery near Shizuoka, Asaka Distillery close to Koriyama, Akkeshi in Hokkaido, Okayama Distillery near Okayama, Nukada Distillery in Ibaraki prefecture, and Saburomaru Distillery near Takaoka. What the future will bring is too early to tell, but it’s worth noting that a few of these distilleries already carry some significant whisky history with them. First is Shizuoka, located southwest of Mount Fuji. Owner and managing director Taiko Nakamura bought the old stills and the malt mill from Karuizawa Distillery, whose whiskies are currently among some of the most sought-after and expensive in the world. He has managed to restore one of the stills and is using it to produce an exquisitely sweet new make spirit.

A two-hour train ride north of Tokyo, the long-established Sasanokawa Shuzo’s new Asaka Distillery can be found in the heart of Fukushima prefecture—not far from where the devastating earthquake struck in 2011. A true survivor, Sasanokawa Shuzo persevered for decades by focusing on their blended whiskies. In 2016, two brand new Japanese pot stills began producing single malt. Just like many of the other new craft distilleries in Japan, Asaka is planning to release their first whisky in 2020, coinciding with the Tokyo Summer Olympics. Shortly after the long-awaited revival and international coming-out for Japanese whisky in the 21st century, we are already entering another era, a third wave of Japanese distilling, where small producers focus on exceedingly high quality and rich tradition, and prepare to seduce whisky lovers once again.

Through historic mashbills, creative finishes, the use of peat, and advanced age statements, Irish Whiskey is as exciting as ever.

Scotland holds the crown but these countries and regions are producing great single malt whisky that’s worth keeping an eye on.

Inspired by scotch, global whisky producers are creating single malts that are unique representations of their climate and culture.