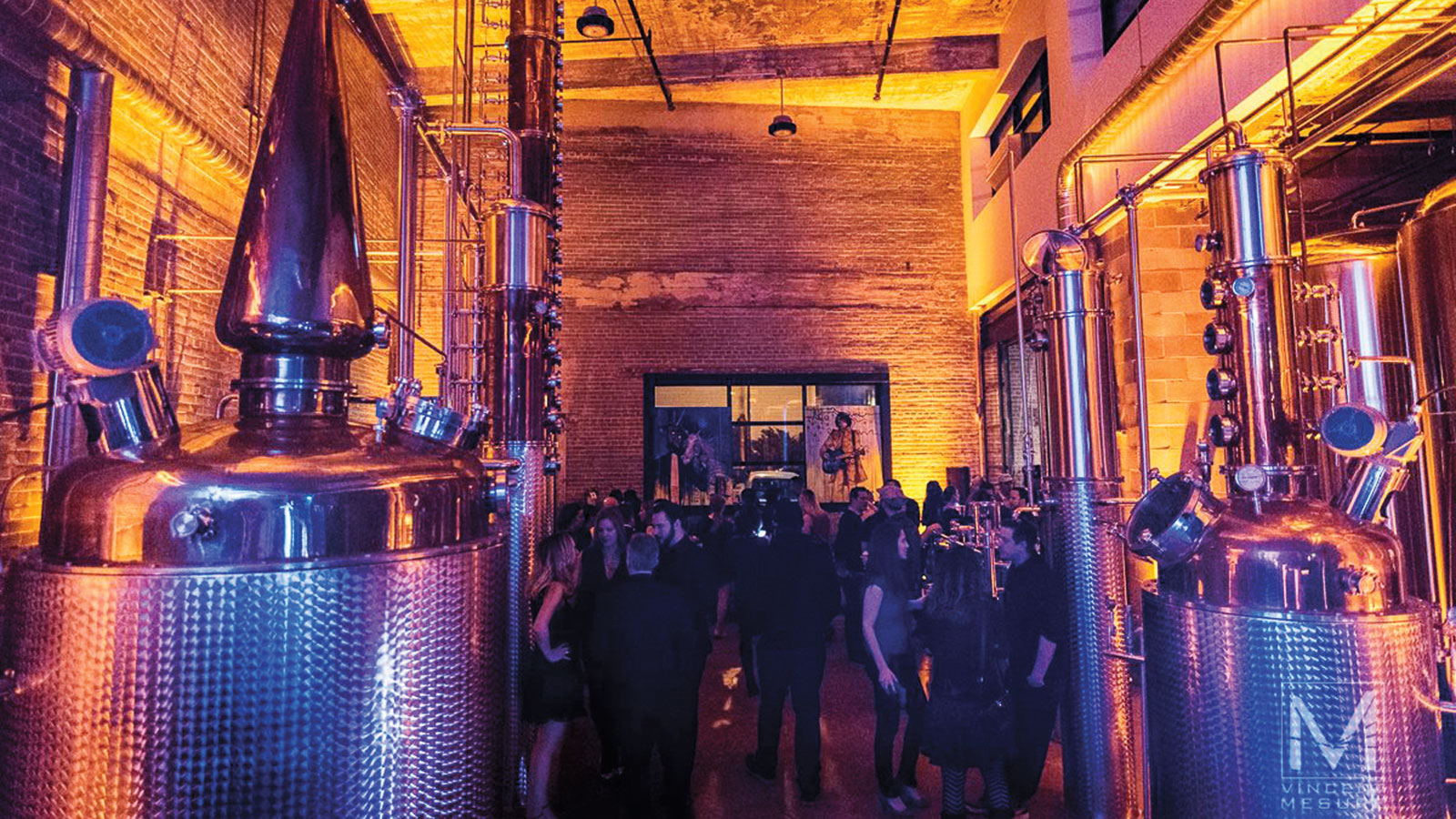 Never mind Vegas; Montreal is the original Sin City, a nickname it earned during Prohibition when it quenched American thirst with an influx of Canadian whisky thanks to an alleged deal struck between Samuel Bronfman, of Montreal-based Seagram, and Al Capone. Nowadays, Montreal is known for its fantastic wine bars and brewpubs, but its distilling roots are beginning to reemerge. A handful of craft distilleries have opened recently and Sazerac, which at one time operated out of Old Montreal, started distilling there once again this fall. The Old Montreal Distillery will offer visitor tours beginning next spring.

For now, local distilling operations in the city are tiny—and young, as are their whiskies. Cirka Distilleries, located in an industrial neighborhood in the city’s southwestern quadrant, offers tastings of its vodka and gin as it awaits the blended whisky, 100-percent rye, and single malt aging in the warehouse. Tours of the small distillery end in the sleek tasting room, with its concrete floor and large reclaimed-wood bar. The whisky will be ready in two-and-a-half years when the requisite 3 years aging for Canadian whisky is met.

Given that Cirka is in something of a no man’s land, you’ll want to start by orienting yourself downtown. This year marks Montreal’s 375th anniversary and the city center is livelier than ever. Come fall, the Museum of Contemporary Art is unveiling its Leonard Cohen exhibition, which runs through April 2018. The iconic Montreal-born singer famously attributed his unmistakable gravelly voice to “about 500 tons of whisky and millions of cigarettes.”

Once you’ve got your bearings, you’ll want a cocktail. Bar George, located in the recently renovated Le Mount Stephen Hotel, serves rather fine ones. The decor is plush, with gold crown molding, a gleaming black marble bar top, and studded tan leather barstools. Drinks lean heavily on classics, such as the Boulevardier du Baron (Canadian whisky, Campari, sweet vermouth, maraschino liqueur). Montreal is a latecomer to the craft cocktail movement, but has been playing catch-up in the last few years with a slew of new bars.

Grab lunch a few blocks away at Dominion Square Tavern, which dates back to 1927 when it was part of a hotel that later burned down. By the 1970s, it had become one of the city’s pioneering gay bars. In 2014, the tavern was lovingly restored and now serves contemporary English pub-meets-French brasserie fare alongside stellar cocktails. 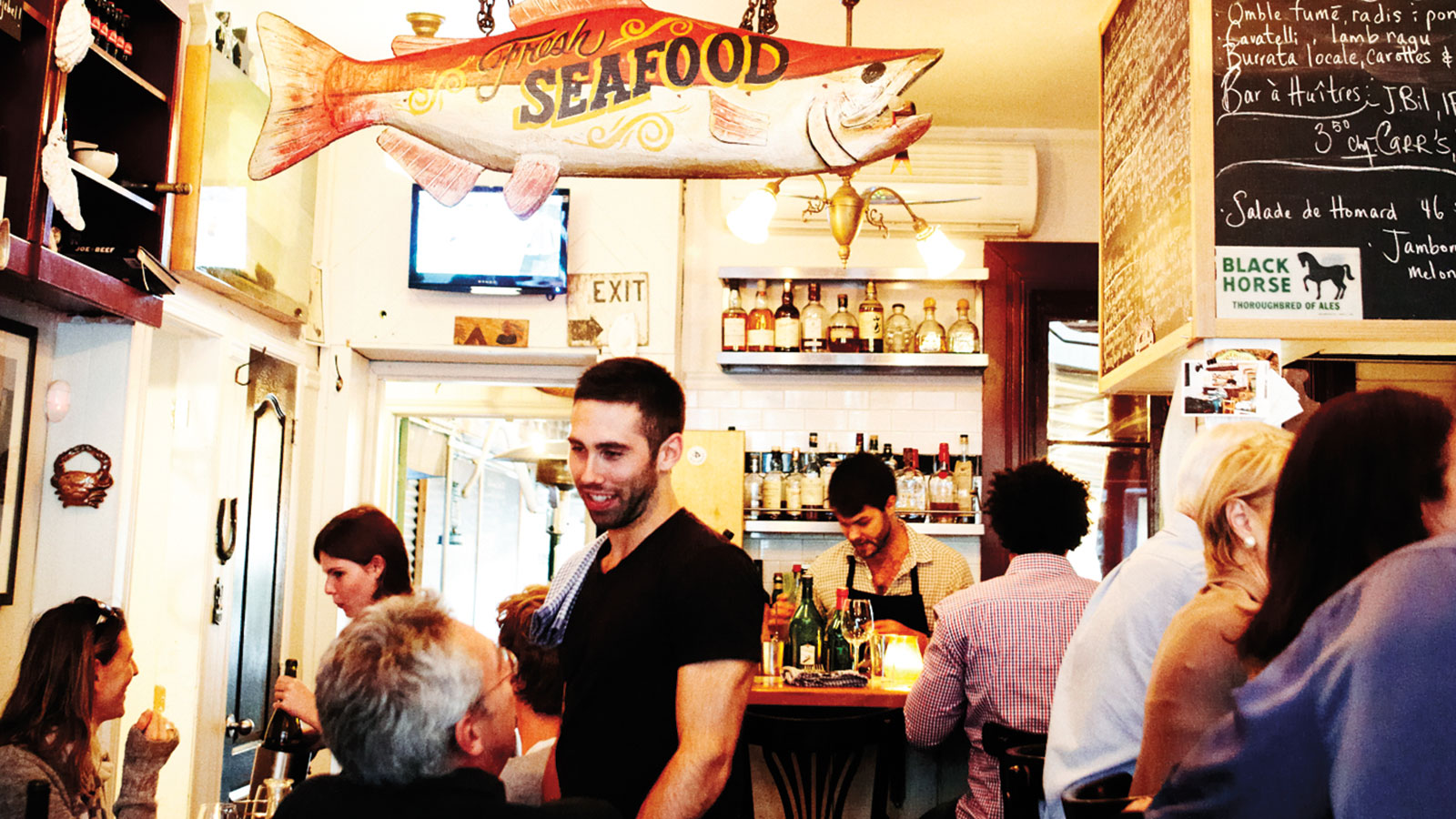 Now you’re ready for Cirka, a short Metro ride away (plus a long walk; a cab from the station is recommended). Try the new Old Tom-style gin made with botanicals sourced entirely from Canada’s boreal forest and sweetened with Laurentian Mountain honey. Cirka’s products are available in local bars and SAQ stores across the province. (SAQ or Société d’alcools du Québec is the province-run wine and spirits vendor. A decision to allow craft distilleries to sell directly to consumers has yet to be implemented.)

SAQ Sélection stores, such as the one across the street from Atwater Market, have a more specialized selection than regular SAQs. Pick up a bottle of something you won’t find elsewhere, like Glen Breton Rare, a Canadian single malt from Nova Scotia, then cross the street to stroll through the market. Fromagerie du Marché Atwater has a tantalizing assortment of raw local cheeses and an impressive craft beer section.

A short walk from the market is Burgundy Lion, which boasts one of the largest whisky selections in the city at about 250 bottles. In addition to a hearty contingent from Scotland, including exclusive bottles like AnCnoc 35 year old, plus smaller stocks of American and international offerings, it has a sizable assortment of Canadian whiskies. If you have any intention of dining at critically acclaimed Joe Beef, across the street, be sure to book well in advance.

For a white tablecloth dining experience, visit the boho-chic Plateau Mont-Royal neighborhood, where you can indulge in a classic steak dinner at Moishes, a city institution. It celebrates its 80th anniversary next year; the colorful history that began when a Romanian busboy won the restaurant from his boss in a card game.

After dinner, you’ll want a nightcap at Big In Japan Bar, a block up the road. A speakeasy identified only by Japanese characters and the word ‘bar’ on the door, it’s a sleek spot with stern staff and assigned seating. The menu is brief, but look up for a glimpse of the secret stash of Japanese whiskies available only by the bottle. Suspended from the ceiling is a row of bottles already purchased by customers—the bar keeps them for guests to return to at their leisure. 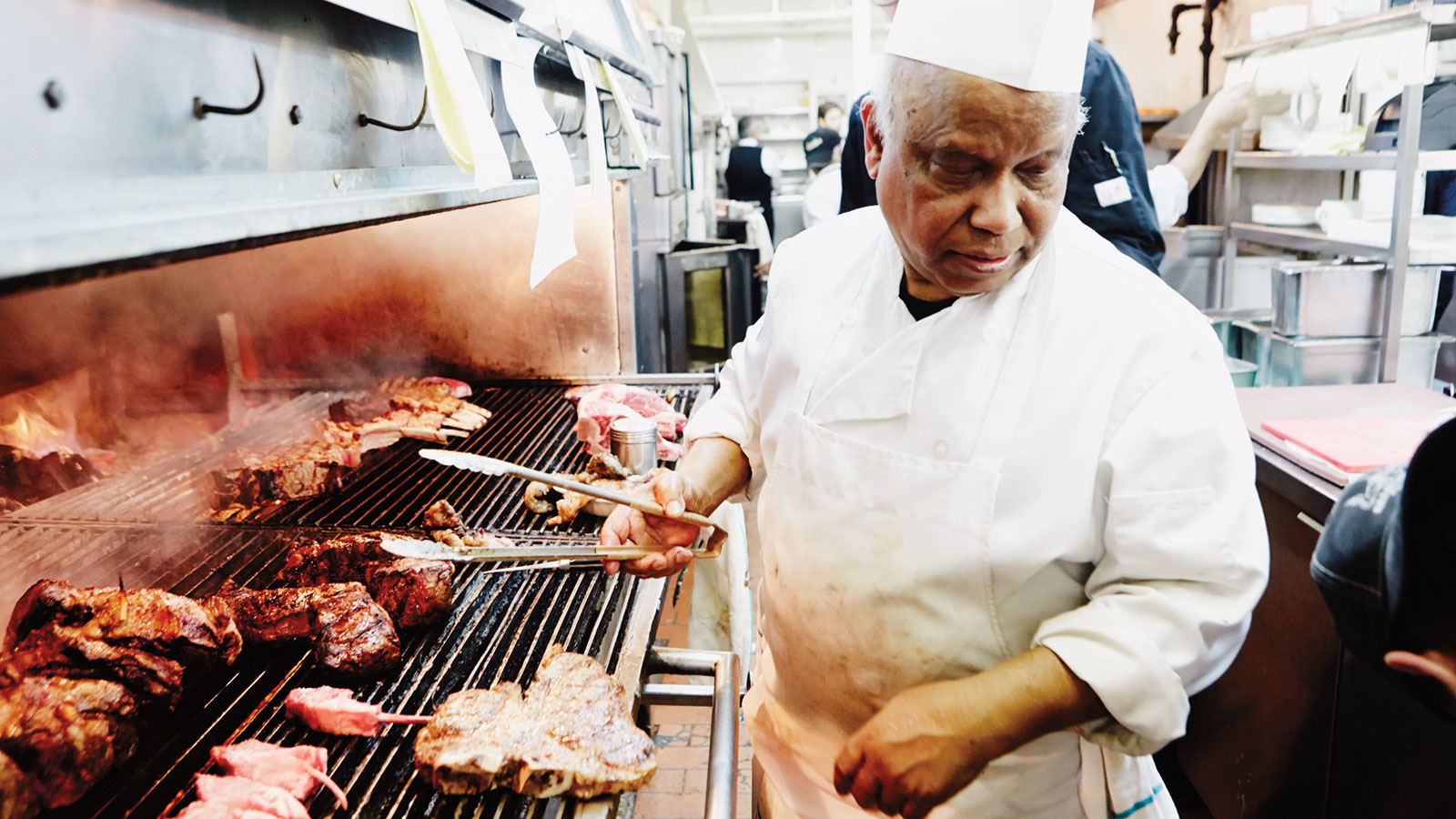 Moishes, a Montreal steak house institution, will celebrate 80 years in 2018.

Boutique hotels abound in Montreal. Besides Le Mount Stephen, with its contemporary rooms that are a contrast to the sumptuous Old World glamour of the bar, there’s the recently opened Hotel William Gray, in Old Montreal. Boxotel, at the edge of the Plateau, is an oasis of minimalist cool with an art gallery and eco-friendly sensibility. For a luxury chain experience, the Hotel Omni Mont-Royal is centrally located, with a superb bar that hosts Whisky Wednesdays.

Independent artisanal breweries are nothing new in Montreal, and their ranks continue to swell. They benefit from four local malting houses that the city’s fledgling craft distilling community also use to great advantage.

Visiting the city’s brewpubs is easy—they’re everywhere. Benelux, in a former bank just north of the theater district, specializes in Belgian-style beers. In the Latin Quarter, Le Saint-Bock has a gargantuan list of beers, more than a dozen of which are brewed in-house. L’Amère à Boire, a block over, specializes in German, British, and Czech styles. Montreal Craft Beer Tours includes all three on its walking tour. A second tour offered in a more residential area near the sprawling Jean-Talon Market takes you to Brouhaha, Isle de Garde, and the brewing co-op MaBrasserie. Both tours include bar bites (even poutine, the local specialty of fries, gravy, and cheese curds).

For a proper lunch, head to Bishop & Bagg in Mile End—it boasts some of the best pub grub in town. It also has a decent whisky list, but a more impressive selection can be found at nearby Whisky Café. Dim lighting, Danish modern leather armchairs, and more than 150 whiskies on the list might put you in the mood for a cigar. Their Le Salon Cigare, with its intimate, luxurious vibe, is like a private lounge within a lounge. 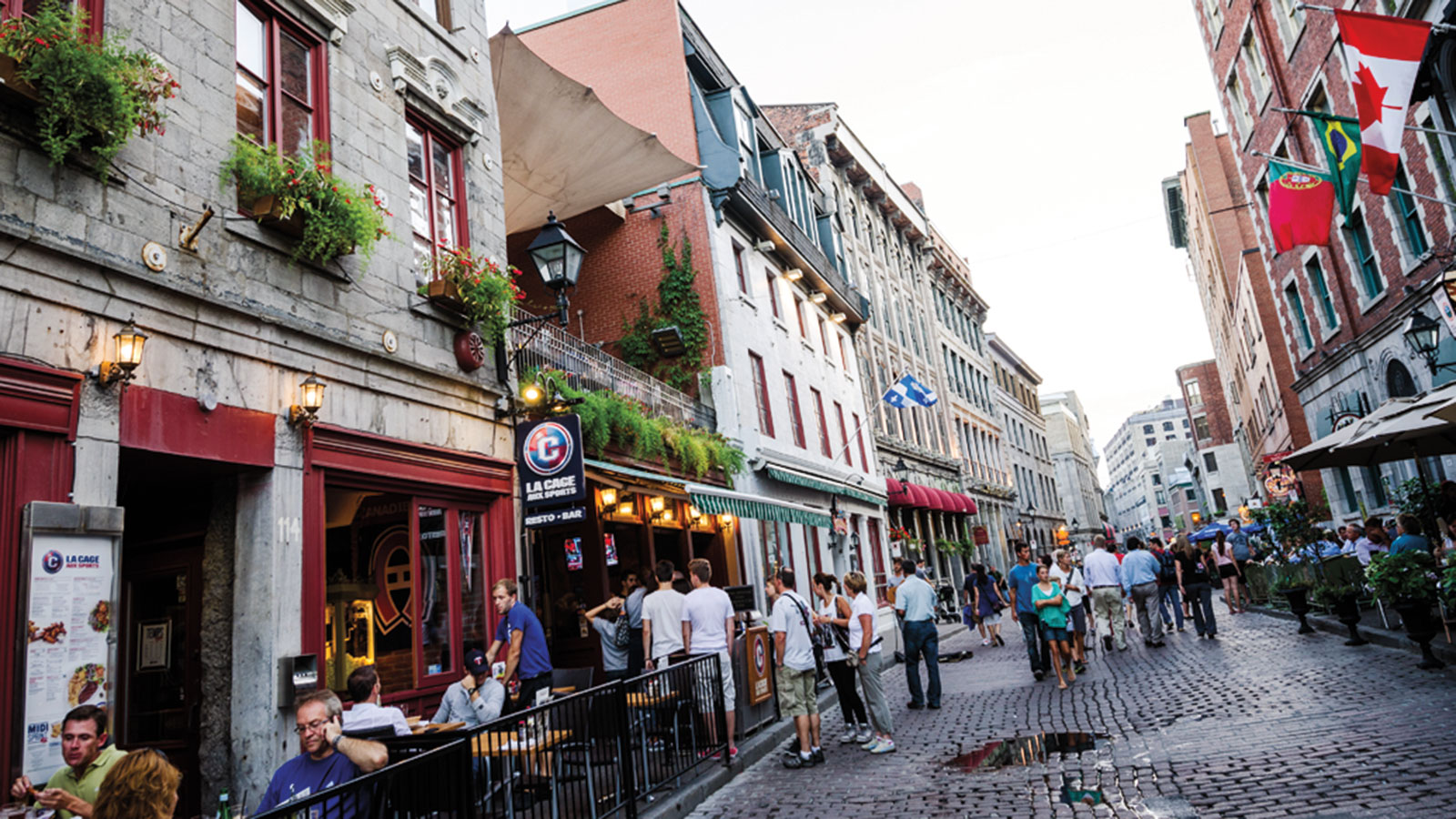 Rue Saint-Paul is Montreal’s oldest street and is home to many restaurants and shops.

For the 375th anniversary, the Jacques-Cartier Bridge has been illuminated in an interactive installation driven by data: the lights change based on the weather, traffic, most-discussed media topics, and general mood of the city. It’s best viewed from the Old Port, where the cobbled streets fill up with people at night. For an epic dinner, book at Le Club Chasse et Pêche (The Hunting and Fishing Club), where, as the name suggests, the menu highlights fish and, often, wild game.

Alternatively, Auberge Saint-Gabriel, a restaurant with a more than 300 year-long history, specializes in cuisine de terroir: upscale Québecois. After dinner, don’t miss Pub L’Île Noire, just north of Old Montreal, with its more than 300-strong collection of whiskies, mostly scotch. The bar is one of a handful that, during the Montréal en Lumière winter festival last February, were given permission to stay open until 6 a.m. (legally, bars close at 3 a.m.). Here’s hoping it becomes an annual tradition.