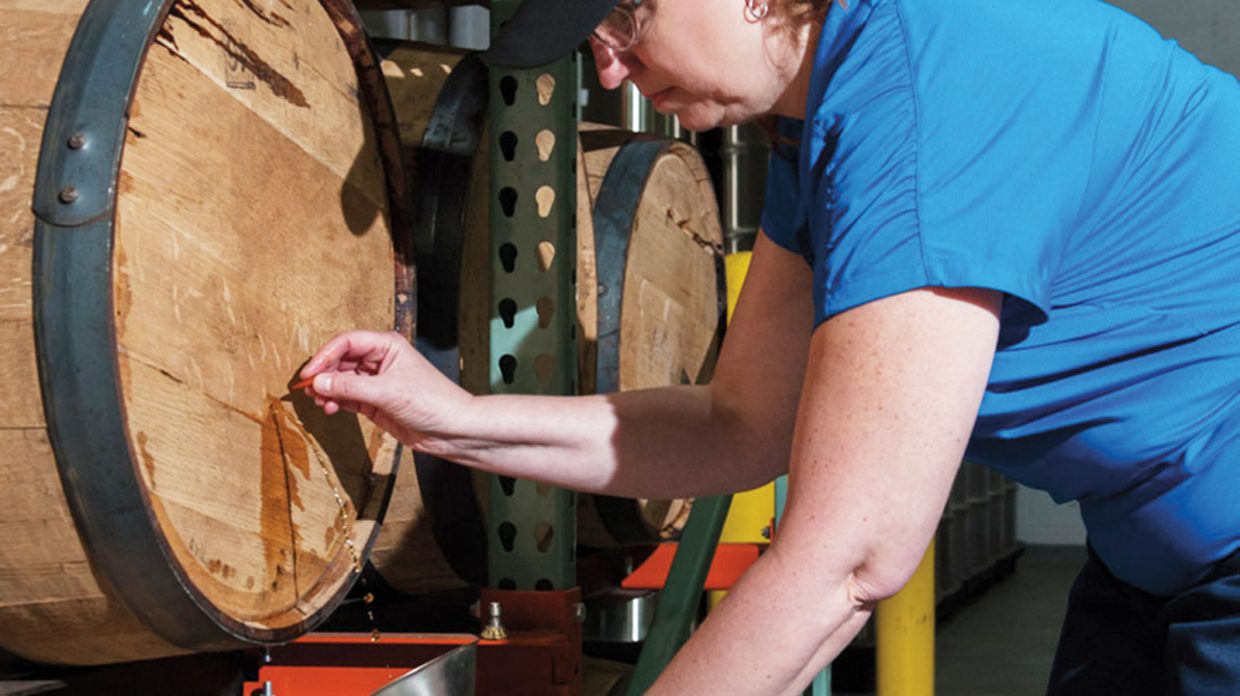 American whiskey drinkers can easily locate the proof of their favorite whiskey on the bottle label, but more elusive is its barrel entry proof, the alcohol strength at which it enters the wood barrel. You see, before they dump it into barrels, distillers are legally required to reduce the proof of their bourbon or rye distillate by adding water. Reducing the proof in turn increases the total volume of liquid. Thus, the lower the proof of the whiskey, the more barrels that are required, adding greatly to the final production cost.

In 1962, the U.S. Treasury raised the legal maximum barrel entry proof from 110 to its current 125. Since the regulatory change, most distillers slowly increased their own barrel entry to take advantage. But now, some bourbon producers are returning to lower-proof barrel entry, despite the costly proposition.

Of the brands that were around in 1962, Maker’s Mark is the only one that has continued to enter whiskey into barrels at the old proof maximum of 110. But in the past decade, upstart distillers and existing brands have explored lower entry proofs.

Soon after the 1962 regulation change, two Seagram chemists studied the importance of barrel entry proof. In 1974, the Journal of the Association of Official Analytical Chemists published their results, including the fact that bourbon’s color intensity and congener concentration—which reflect the tasty caramels, vanillas, and baking spices we all love in American whiskey—decreased as the barrel entry proof increased.

So why is lower proof better?

It’s the extra water, says Michter’s Andrea Wilson, a chemist and manager of the distillery’s maturation. If you’ve ever tasted a whiskey that’s over-oaked, you likely picked up an astringency, dryness, and bitterness caused by the wood’s polyphenolic compounds, commonly referred to as tannins or wood sugars. Phenols play an important role in whiskey’s flavor, bolstering the tasty esters, but too many just render the unwanted wood note. “Water is a powerful agent for breaking down compounds and the wood sugars. Phenolic compounds tend to be astringent and hot, and when you add water, phenolic compounds are soluble in water. Once dissolved, they are free to oxidize, creating a smoother whiskey,” Wilson says. “The easiest way to think about it is that first, when you toast a barrel you soften the tannins in the wood. Lowering the entry proof of the spirit and adding additional water allows for the phenolic compounds to dissolve into solution. Then as the barrel breathes in oxygen it will oxidize the dissolved compounds, creating a much smoother whiskey due to the chemical changes of the astringent compounds. I think about it like wine; when you decant and let it breathe, it is taking on oxygen, allowing the flavors to really open up and shine with a robust, rich, smooth flavor,” explains Wilson.

That sentiment is shared by the folks at Wild Turkey, who use a barrel entry proof of 115. “We also think the higher proof brings more of the harsh wood taste out,” says Eddie Russell, Wild Turkey master distiller.

Then again, according to a Buffalo Trace study, lower doesn’t necessarily mean better. In its ongoing Experimental Collection series, Buffalo Trace determined their optimum barrel entry proofs are 115 and 125 in wheated bourbon and rye respectively. This suggests that the post-1962 barrel proof era may create better whiskey.

Of course, among distillers, this subject is one of friendly debate; most agree with Maker Mark’s Greg Davis, who notes that his 110 barrel entry proof doesn’t make Maker’s Mark better than Heaven Hill or another distillery going in at 125. “It just makes it different,” Davis says.

Therein lies the middle line; barrel entry proof is just one part of creating great American whiskey. “It would be silly to think that barrel proof does not have influence. I just think that it is a combination of so many other variables, such as mashbill, yeast, distillation style and proof, warehouse location, individual warehouse, maturation time, and bottle proof,” says Denny Potter, Heaven Hill master distiller. “If you take just all of that into consideration, think of all the different combinations that can be calculated that can have a direct impact on taste profile.  It’s phenomenal, really.  I think 125 works great for us because it allows us to lock in one variable that we know performs well in the barrel and allows us a more efficient use of that barrel.”