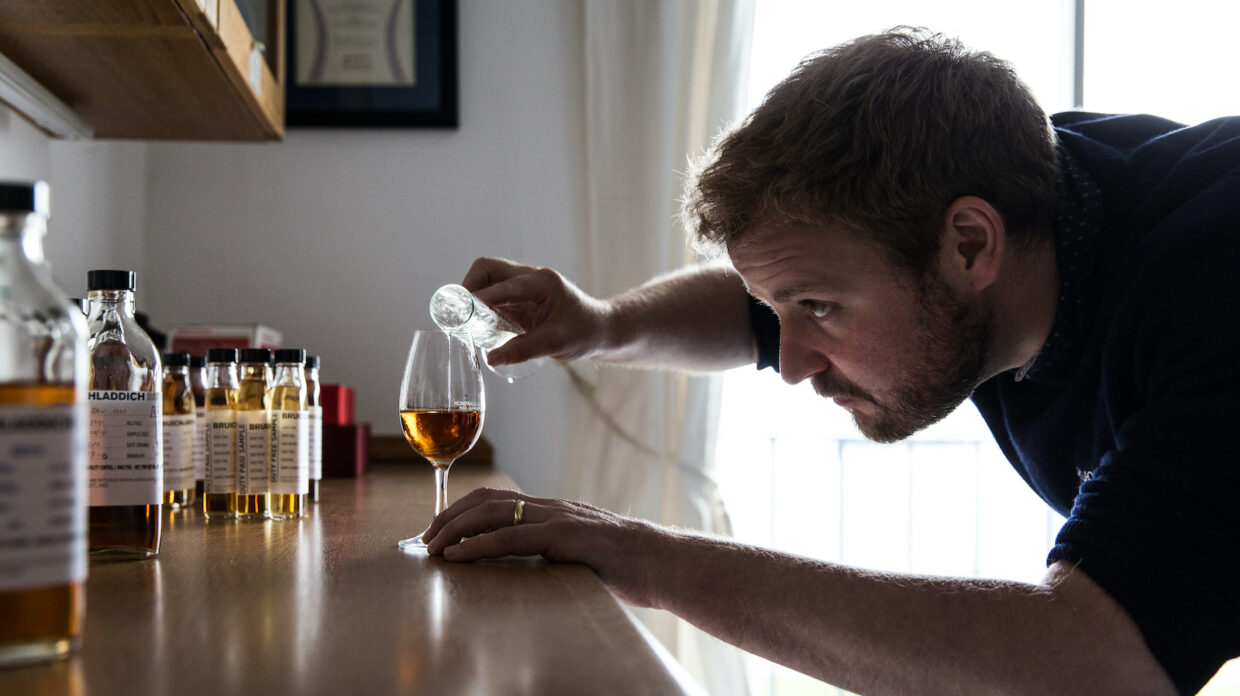 Adam Hannett, head distiller at Bruichladdich, joined #TasteWithSpace on Sept. 11 to discuss why he openly shares information about the whiskies.

Making single malt scotch can be a complex process, with dozens and even hundreds of barrels going into a single batch, each one of them different in terms of flavor profile, maturation history, or even ingredients, if the distillery uses various barley types and peat levels. Providing information about the exact makeup of a whisky can be an arduous task—but it’s something Bruichladdich Distillery is committed to, because so many whisky lovers want to know. “I’m really interested in whisky,” said Bruichladdich head distiller Adam Hannett during Whisky Advocate’s Instagram Live series #TasteWithSpace on Sept. 11. “And I want to know when I taste whisky where those flavors are coming from.”

Long an advocate for transparency in scotch whisky, thanks to changes in the Scotch Whisky Association’s (SWA) policies, Bruichladdich is now able to tell drinkers precisely where the flavors they’re tasting in its Classic Laddie are coming from; there’s a code on the back of each bottle which, when entered on Bruichladdich’s website, reveals the cask types and barley varieties that went into that specific batch, along with the distillation year of the youngest components in the blend. (The SWA will not permit sharing ages of any whisky but the youngest.) “It’s all about being transparent, about being open—we have no secrets at Bruichladdich,” Hannett said. “We’re willing to have a conversation with anyone about how we make whisky, what we think is important to make whisky.” Bruichladdich aims to provide full information about its entire range eventually.

Taking numerous questions from viewers, Hannett also spoke candidly about Bruichladdich’s history, including its temporary closure in the 1990s, and what it’s like to follow in the footsteps of former master distiller Jim McEwan—especially when making Black Art, the distillery’s mysterious top-shelf expression and the only whisky whose components will never be revealed. “With Black Art 5 [the first batch Hannett created], it took me a long time to develop that, to blend that, to get that to a stage where I was happy with it,” Hannett said. “And there’s a lot of doubt, but at the end of the day, releasing Black Art 6, or Black Art 7, or working on 8…You change, you evolve, that’s what life is all about—it’s about learning, it’s about developing.”

Hannett also answered viewer questions and chatted with Whisky Advocate senior whisky specialist and digital editor Susannah Skiver Barton about a virtual blending experience that he conducted earlier in the summer. In the blending lesson, Hannett led a group of journalists in blending their own version of The Classic Laddie, with the challenge of getting the new blends as close as possible to the original product. Hannett critiqued Skiver Barton’s blend in front of the Instagram Live audience, giving it a score out of 10. (You’ll have to watch to find out how it did!)