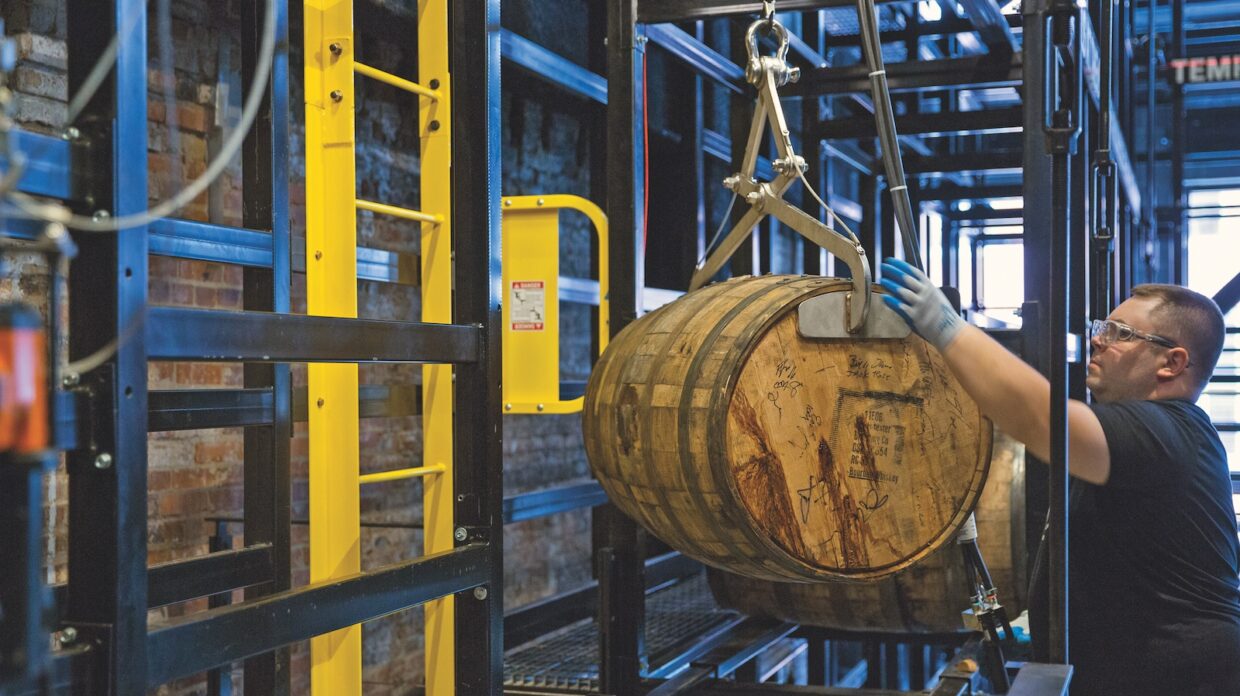 Taste Old Forester straight from the barrel with 1920 Prohibition Style, its cask strength offering that is a part of the Whiskey Row series. (Courtesy of Brown-Forman)

Barrel-proof whiskey—which has no additional water added before bottling—consistently delivers big, bold aromas and flavors. For many whiskey drinkers, this uncut, minimally filtered liquid is as good as it gets. “If you ask any distiller—especially a bourbon distiller—what is their best bourbon, it would always be straight out of the barrel,” says Wild Turkey master distiller Eddie Russell.

As Russell notes, bourbon might be considered the poster child for big proof, since in Kentucky, proof almost always increases with time in the barrel (unlike Scotland, where proof generally dwindles over decades). As whiskey matures, some liquid is lost to evaporation—known as the angels’ share. In hot, dry climates, the barrel loses water at a faster rate than alcohol, so the whiskey’s strength increases over time. The environment of the particular warehouse and a barrel’s specific location further influence a whiskey’s final measure of alcohol by volume (ABV). A whiskey that is bottled at no more than two degrees of proof lower than when it came out of the barrel may be labeled “barrel strength” or “barrel proof,” according to the Alcohol and Tobacco Tax and Trade Bureau. (The “two degrees” rule gives distillers leeway if proof drops slightly prior to bottling.)

There are several reasons high-proof whiskeys generally deliver an intense experience. Our noses and palates detect different aromas and flavors depending on the concentration of ethanol in the glass, explains Old Forester master taster Jackie Zykan. “Different aromatic compounds will leave the solution, and be volatile and floating about in the air, right above your glass, at different proof points,” she says. “If you concentrate the liquid in the barrel, then yes, it’s going to have flavor. But it’s not necessarily just [due to] higher alcohol content that it has more flavor—it’s the fact that you’ve condensed the liquid volume.”

“The key thing about maturation environment is humidity,” Zykan adds. “Water loves balance; osmosis is always leading the charge.” With a porous barrel, resting in a dry climate, “the water molecules want to balance out,” she explains. “They’re going to shoot out into the environment,” leaving a greater concentration of ethanol in the barrel, boosting the whiskey’s proof. “That’s what we see happen in places like Kentucky.”

At higher proof, “flavors just get concentrated,” says Harlen Wheatley, master distiller at Buffalo Trace. “You do lose some alcohol [during maturation] but you leave behind a lot of those wood sugars and tannins that you’re getting” from the barrel, and “it’s a balancing act of your distillate with those wood extracts.” In the case of wheated William Larue Weller bourbon, from the distillery’s coveted Antique Collection, bottling at barrel proof allows this decadent whiskey to shine at the apex of its intensity. “We want to showcase each recipe,” Wheatley explains. “You get the full impact pretty much straight from the barrel,” with only minimal filtration to remove large char particles. 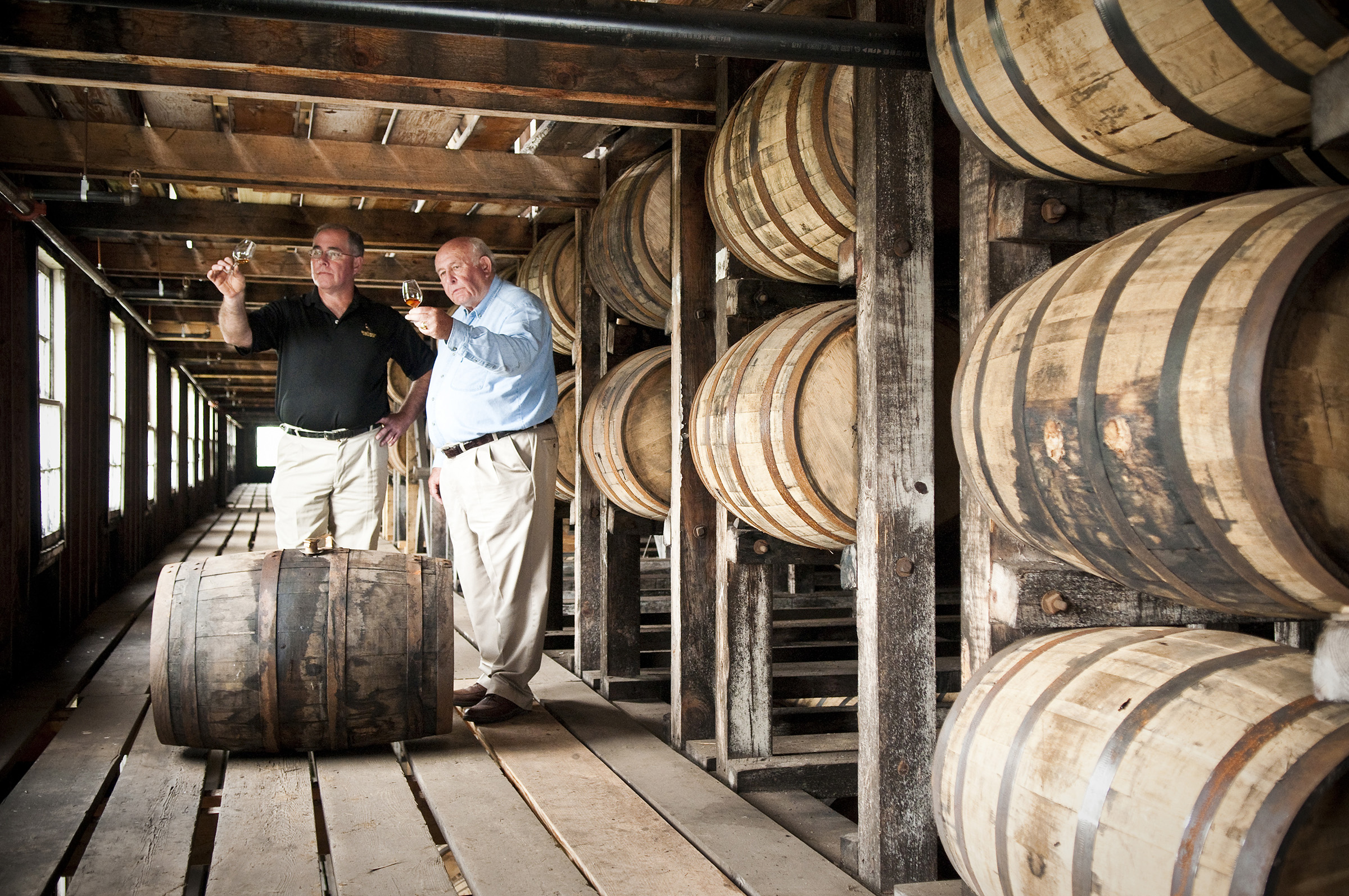 For Wild Turkey master distiller Eddie Russell (pictured with father Jimmy), the best bourbon comes straight out of the barrel.

Too Big to Fail?

Eventually, alcohol concentration may reach a point that becomes unpleasant for even an ardent barrel proof fan. Liquid that entered the barrel at the legal maximum of 125 proof could climb as high as 155 proof from resting on the warehouse’s hotter, drier top floors. “A lot of times that’s not ideal,” Wheatley says. “It just depends on the age. For example, 15 year old [George T.] Stagg, we don’t want it to be on the top floor, so we’ll target the bottom, second, or third floors, where we’ll have a little more balance on the flavor. If it’s balanced—with proper aging techniques to make it smooth, and not burn from impurities—then it’ll still be a good whiskey.”

An often overlooked, yet important, contributor to a whiskey’s final proof coming out of the barrel is the proof at which it went into the barrel: the barrel-entry proof. Most bourbon enters the barrel at the legal maximum of 125, but some distillers elect to place their distillate in barrels at a lower proof, even though it increases the number of costly barrels required. “In general, the lower [the proof] you go into that barrel—meaning the higher your water content—the more readily you’re going to dissolve the sugars out of that barrel, and the sweeter result you’re going to get,” says Zykan.

Maker’s Mark general manager and master distiller Denny Potter says the distillery’s cask-strength bottlings are typically in the range of 108 to 112 proof, fairly modest compared to some other barrel-proof whiskeys, due to the fact that Maker’s Mark enters the barrel at a lower 110 proof. Maker’s aims to further moderate the increase in proof by rotating barrels within the warehouse as they mature. “On the mid-to-lower floors, you might hold proof, or you might lose proof, because there’s more humidity and moisture, which means you’re going to lose more alcohol than water, whereas at the top floors, you’re going to lose more water than alcohol,” Potter explains.

Wild Turkey also enters the barrel at lower proof than the legal maximum. “We’ve distilled and barreled at low proof for many years,” Russell says. By adding more water to the distillate when it enters the barrel it becomes part and parcel of the whiskey, and there is less need to add water when it comes out of the barrel, which only serves to dilute flavor. For example, Russell notes, “Our Wild Turkey 101 bourbon dumps come in around 109 and 110 proof, and we’re adding just enough water to get it to 101.” According to Russell, this allows certain “natural flavors” extracted from the barrel during maturation—the “vanillas, caramels, fruits, nuts, even the dark chocolate,” and “that rich thickness and creamy taste”—to shine. “Personally, I think you’re getting 65% of your taste from that barrel,” he adds. By contrast, “a lot of distillers distill and barrel at higher proofs, but then cut it way down to 80 proof.” In doing so, they’re “taking away a lot of those natural flavors.”

The 2017 release of Rare Breed, Wild Turkey’s widely available barrel-proof bourbon, clocked in at 58.4% ABV and scored 90 points from Whisky Advocate. With notes of roasted pecans, brown-sugar butter, and a long finish, it delivers a lot of flavor for just $45. In June 2020, Wild Turkey rounded out its rye portfolio with the launch of Rare Breed rye, the counterpart to Rare Breed bourbon, and the No. 5 whiskey in the 2020 Top 20. The initial batch is bottled at barrel proof—a hefty but not overpowering 56.1% ABV—and priced at $60; it includes whiskeys aged 4, 6, and 8 years. 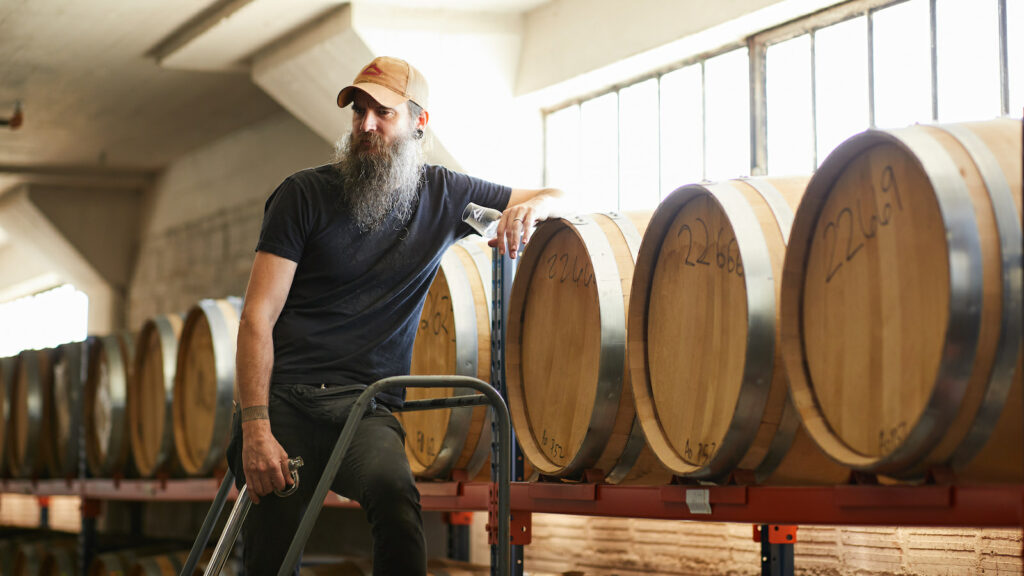 At Balcones in Waco, Texas, head distiller Jared Himstedt says that whiskey can surge above 140 proof in just five or six years thanks to the hot climate.

The Proof Is in the Proof

Given no other information about a whiskey, high proof can be a good indicator of flavor intensity and often overall quality. In the U.S., proof generally increases with time in a barrel, so you know there has been some degree of maturation. Bottling at barrel proof also speaks to the distiller’s intent, offering whiskey that is as close to untouched as you can get without slipping into the warehouse and sneaking a sample straight from the cask.

Of course, there is a simple solution when the proof soars too high for pleasant sipping: water. For the drinker, barrel-proof whiskey provides both abundant flavor and flexibility. “It’s about options,” says Jared Himstedt, head distiller at Balcones Distilling in Waco, Texas, where whiskey can surge above 140 proof in a matter of just five or six years due to the hot climate. “When I bottle a whiskey at cask strength, I haven’t made any dilution decisions for the consumer, and everyone’s personal preferences are different,” says Himstedt, noting that cask-strength whiskey delivers the richer texture, full mouthfeel, and abundance of flavorful congeners that many enthusiasts desire. Meanwhile, Tripp Stimson—master distiller and distillery operations director at Louisville-based Barrell Craft Spirits—says he enjoys whiskey most at cask strength “because it offers such a concentration of big, bold flavors.” At the same time, he acknowledges that some high-proof whiskeys benefit from adding water before drinking. “When you add water, you start to dilute the concentration of those flavors, which changes some of the solubility properties of the liquid and allows some of the aromatics to really open up.”

Whether you take it as it comes from the cask, or add water, barrel-proof whiskey offers some of the biggest and boldest flavor. “It’s a true representation of what we did six years ago, and also what happened during the maturation process,” Potter says. “You’ve got a lot of extraction that has occurred through the years, and also some ester formation, because you’ve given it more time in the barrel. There’s a balance between intense flavor and too much alcohol burn, but when you get it right, it’s really whiskey amped up.”