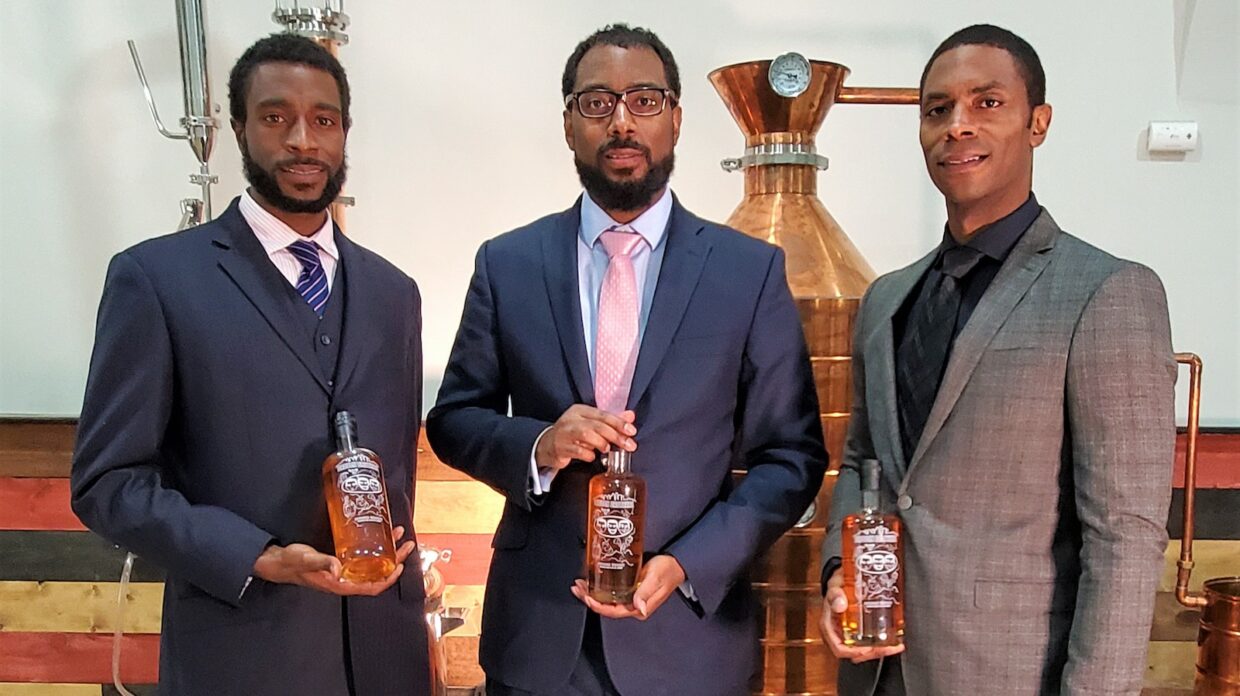 Victor Yarbrough (center) started Brough Brothers with his siblings Bryson (right) and Christian (left) after successfully importing goods, bourbon among them, into the UK.

Capping off a year where a spotlight was placed on diversity in American whiskey, a new operation in Louisville, Kentucky has officially launched as the state’s first African American-owned distillery. Brough Brothers Distillery, founded by brothers and Kentucky natives Victor, Christian, and Bryson Yarbrough, opened its doors earlier this month in the Park Hill neighborhood, and bourbon production is already underway.

“We’re literally distilling right now,” Victor Yarbrough, the company’s CEO, told Whisky Advocate in late December. “These past few weeks we’ve really been trying to focus on owning the processes, and we’re attempting to get the first barrel [filled] by December 31st.” Brough Brothers was able to fill its first 5-gallon barrels on New Year’s Eve, a series the company is calling Origin Barrels.

While the bourbon being made at the distillery has years to age, Brough Brothers has offered bottles of MGP-sourced bourbon since 2019, starting overseas and then stateside since February 2020. With the opening of this new distillery, the company has reached the final phase in what has been a years-long vision. “The company is not new,” Yarbrough says. “But in terms of this actual facet of the business, [producing whiskey ourselves] is new.”

The sourced Brough Brothers bourbon, made from a mash of 75% corn, 21% rye, and 4% malted barley, was initially sold in the UK, where Yarbrough was living at the time. A fan of English hard cider, he saw an opportunity to start an import-export company for alcoholic beverages: exporting cider to the U.S., and importing American craft-made beer and spirits, including bourbon. In 2013, Yarbrough brought Bryson on board, and in 2019, Christian joined them. Together they created the Brough Brothers brand.

“Of course, the larger brands were there, but what we saw was an affinity for bourbon” among British consumers, he says. “They always recognized bourbon as one of the key things coming out of Kentucky, besides Muhammad Ali and sometimes horse racing. So it kind of clicked: We’re from Kentucky. This is our bread-and-butter spirit. This is something that I think we could evolve with and produce a great-quality product.”

With a foot already in the distribution side, the Yarbrough brothers sought first to establish the brand and then develop the whiskey. “I felt that if we were able to get ahold of it, get into the industry at a manufacturing level, we’ll be able to produce not only a great-quality product, but also jobs for the community as well,” Yarbrough says, adding that he’s received advice from fellow whiskey makers at Neeley Family Distillery and Limestone Branch Distillery as Brough Brothers gets up and running.

The company has an 8-foot column still and 50-gallon pot still, and plans to fill both 25- and 53-gallon barrels. It will wait at least two years to release the first house-made straight bourbon, though Yarbrough says there might be a 1 year old commemorative limited edition, matured in a 25-gallon barrel. Additionally, there are plans to contract-distill elsewhere and add a second whiskey to the Brough Brothers range. “It’ll be something commemorative as well,” he says. “A lot of what we do, the thought process behind it is that we want to tell a story. So this would definitely tell a story as well.” The distillery will also offer a gin and vodka.

For now, though, Yarbrough says that they are working hard to lay down distillate. “It’s going to be crunch time,” he says of the effort to kick off production. “Once we have everything running in January, our goal is to pop out a barrel a week in general.”