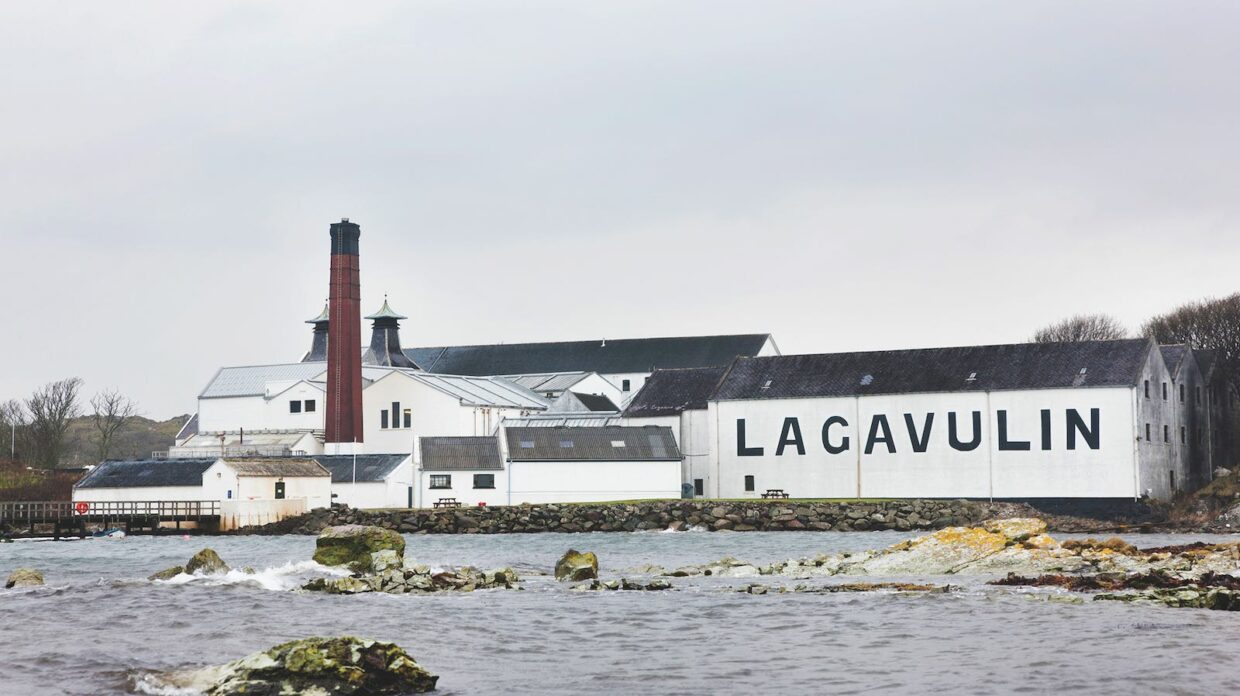 Lagavulin Distillery makes some of Scotland's peatiest whisky, hewing to its origins on Islay. But regional identity for scotch isn't always so clear-cut.

It’s a fixture of nearly every introductory scotch tasting and leather-bound whisky list: the map of Scotland’s whisky regions. Literally a wayfinding device, the regional map is meant to assist in navigating the diverse flavor landscape of scotch: peaty Islay, grassy Lowland, fruity Speyside, and so on. These “regional styles” are usually presented as unquestioned truth, but the reality is much less clear-cut. On the surface, regional styles are a way to quickly get oriented, but at times they can be misleading.

“Regionality is quite useful for helping people to explore Scotch whisky—it’s a good starting point,” says Gregg Glass, blender and whisky maker at Whyte & Mackay. Liquor stores organize scotch by region; tastings start with Lowland single malt (alleged to be light and easy) and end with Islay (heavy and peaty); and that map seems to be everywhere. But if you taste enough single malts, you’ll eventually try a peaty Lowland or a delicate, unpeated Islay—whiskies that seem to defy what we’ve been told. Distillers and blenders like Glass concede that it comes down to the individual distillery, not where it’s located. “There’s so many variables,” he says. So where did the idea of the regional whisky style come from—and is it all that useful? 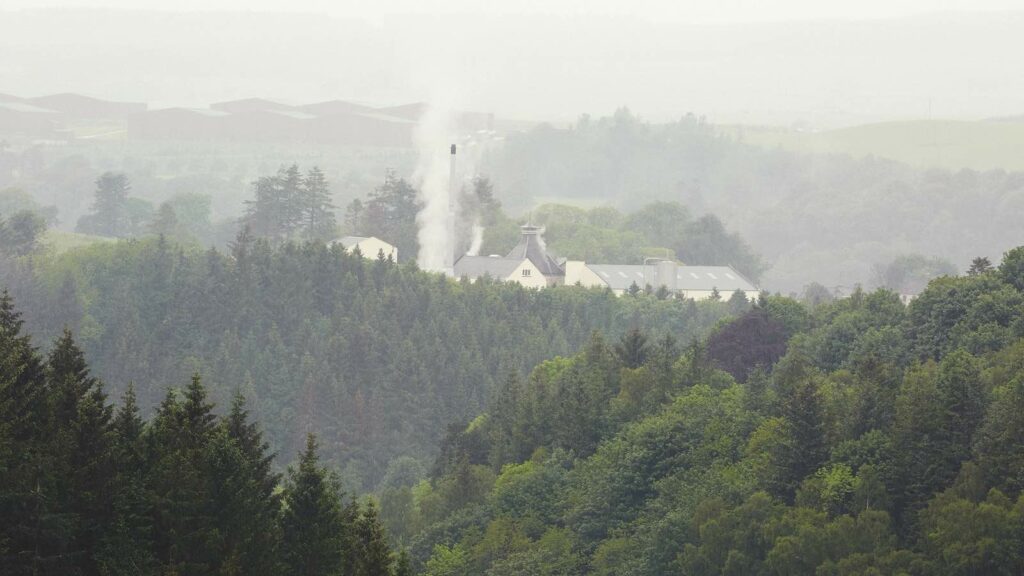 Nestled in the heart of Speyside, Craigellachie Distillery makes single malts that are unusually meaty and oily, bucking the character of honeyed elegance that defines the region for many.

Scotland’s geopolitical organization has nothing to do with distilling, but there is historical precedent for the concept of regional whisky divisions. Traditionally, the country’s main partition was between the Highlands and Lowlands; in 1784, the two areas were formally separated with different taxation schemes applied to distilling. The result was that Highland distillers tended to remain small and often illicit operations, while Lowland distillers grew into larger businesses that did a bustling trade with England and export markets. A tax reduction in 1823 incentivized Highlanders to go legal, leading to a distillery boom. And around the middle of the 19th century, the adoption of the continuous still created a new style of whisky, made from grain rather than malt, and sparked the birth of the blend. Scotch was changed forever.

The blender’s goal was to create a unique and balanced product—ideally, one that exceeded the sum of its parts. Blenders combined multiple malt whiskies, which were heavier and more robust, with light and innocuous grain whisky. They mixed and varied combinations, often changing what malts were included based on availability. Eventually, to facilitate such flexibility, they began grouping together malts that could be swapped and substituted.

Ledgers and logbooks from the 19th century give clues about these groupings, and show that there were certain hot spots—whisky purchased from these areas would typically have been logged by its place of origin, like Islay or Campbeltown, rather than under a specific distillery name. Each blender had an individual system of organization. Around 1913, when developing recipes for Johnnie Walker Red and Black, Alexander Walker II was using the term “North Country” to group together malts from the Highlands and Islands—although the term was applied inconsistently, with some distilleries included under both “North Country” and other headings, indicating that the classification was already becoming shorthand for whisky style rather than specific location.

Although the Distillery is situated in the Lowlands of Scotland, the quality of the spirit appeared to us to be of a most pronounced and excellent Highland style of Whisky. – Alfred Barnard, “The Whisky Distilleries of the United Kingdom” (1887)

This practice continues today. Blenders like David Stewart, malt master for Balvenie, use proprietary systems that group similar malts by flavor and texture, as well as how they integrate into a blend. “These malts are grouped in accordance with their flavor and style, with the sweet and fruity kept separate from the more robust and possibly sulfury ones,” Stewart says, adding that, “Obviously, the island malts are selected on their peatiness, with some much lighter than others.”

Unique flavor and character could give malt distilleries a competitive edge; their whisky couldn’t be easily substituted in a recipe. And so distillers began to deliberately create whiskies that would be not only desirable, but irreplaceable to blenders, perhaps earning them a singular spot in the blend. Around 1857, for example, Ardbeg shows up in Alexander Walker I’s stock book, rather than the more common “Islay malt.” Glenlivet was so popular as a single malt, and later as part of a blend, that it spawned a host of imitators and came to be synonymous with an early idea of regional style.

By the time Alfred Barnard, an early whisky writer, toured all the distilleries in the United Kingdom in the mid-1880s, the idea of grouping whiskies by place of origin was apparently well-established, if not consistent. Barnard noted a variety of malt types—Islay, Campbeltown, Highland, Lowland, even Strathisla and Mull—although, notably, he rarely ascribed to them any flavor or aroma characteristics, meaning we can’t know what “Highland style” meant when it came to drinking the whisky. Even then, distillery locations seemed to be associated with certain styles of whisky, but Barnard noted anomalies. For example, Campbeltown distillery Albyn was making “Highland malt,” while Barnard wrote of Bankier Distillery near Falkirk, “[The whisky] is now made on North Highland principles, and, although the Distillery is situated in the Lowlands of Scotland, the quality of the spirit appeared to us to be of a most pronounced and excellent Highland style of Whisky.” 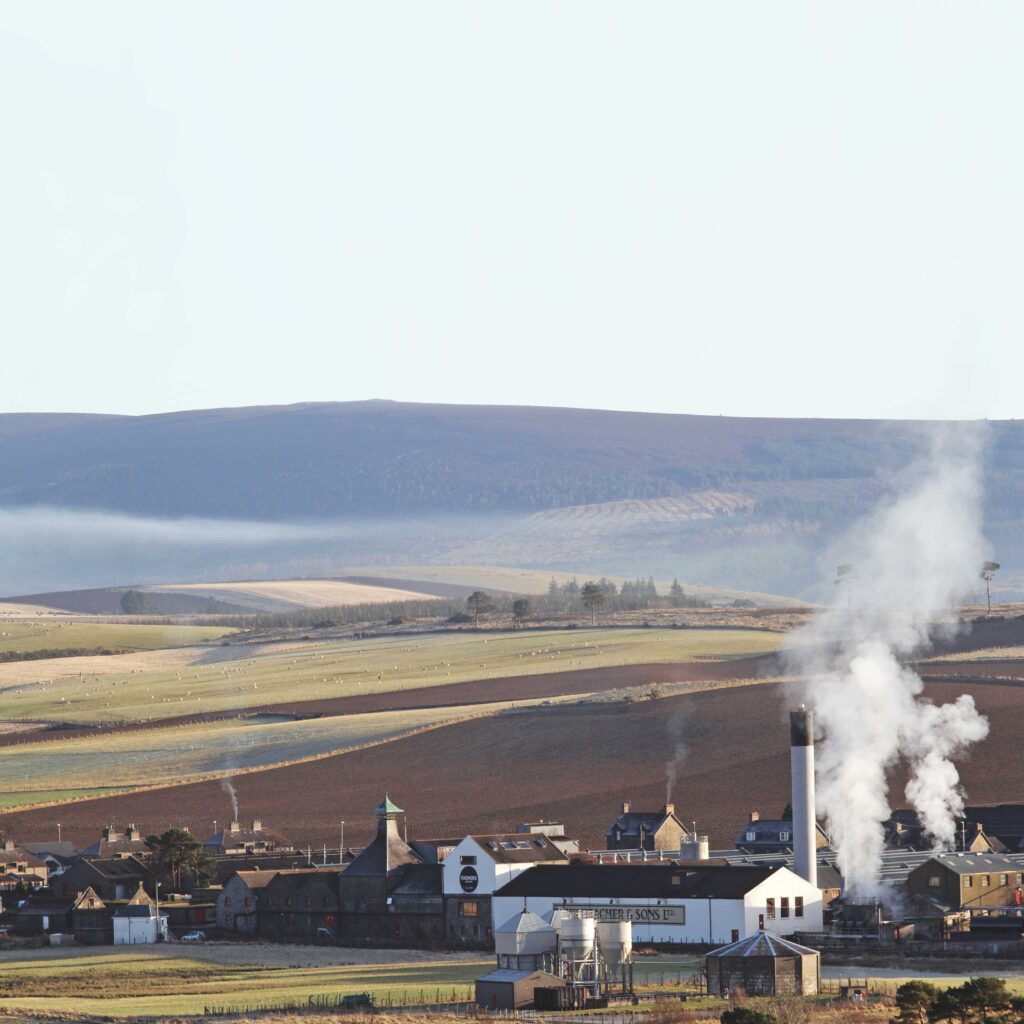 Ardmore Distillery is located in the Highlands, but makes a heavily peated single malt that would be at home on Islay.

During the reign of blended scotch, regional characterizations of single malt were strictly the parlance of blenders and a small audience of single malt aficionados, mostly in the UK. Sales of blended scotch declined in the 1970s and ’80s, and in 1988 United Distillers & Vintners (UDV), the predecessor of drinks conglomerate Diageo, introduced a range of six whiskies called the Classic Malts of Scotland, each selected from a different region: Glenkinchie (Lowlands), Cragganmore (Speyside), Lagavulin (Islay), Dalwhinnie (Highlands), Oban (West Highlands), and Talisker (Isle of Skye). While the regions selected were chosen based on where UDV had distilleries, the effort was successful at promoting single malt style on the basis of region.

UDV was not the only one discussing single malts in regional terms. Whisky writers—notably the late Michael Jackson—were using language about regional character to describe and interpret single malt for a nascent audience of enthusiasts. In his 1987 “World Guide to Whisky,” Jackson set up his own organization of regions, careful to point out that while some areas might have several distilleries making whisky with common characteristics, the template can’t be applied evenly across the board. “Although these styles are not formally defined, they do have a meaning for malt lovers,” he noted. Formal recognition of scotch’s three regions (Highlands, Lowlands, and Speyside) and two localities (Islay and Campbeltown) came in 2009 with the passage of the Scotch Whisky Regulations. But the law centers on protecting scotch production and labeling, rather than dictating style.

Nowadays, Scotland is again experiencing a whisky boom. New distilleries are being built and established players are expanding production. In addition to accommodating new tastes for single malt, this has the added benefit of bringing more of the supply chain for blends in-house—and in many cases, it has actively eroded any idea of a distinct regional style. For example, Ailsa Bay Distillery, located in the Lowlands and owned by Balvenie’s parent company, William Grant & Sons, produces four distinct styles of single malt for use mainly in blends: lightly and heavily peated, oily/sulfury, and one that Stewart describes as being “Speyside-style…like Balvenie.” Whereas the company might have traded or bought casks of certain whiskies needed for its blends in the past, now it has the ability to create those flavors itself.

The idea of making diverse whiskies in one distillery is not entirely new; Glenlivet master distiller Alan Winchester has been working in the scotch business for more than 40 years and recalls when parent company Chivas Brothers owned BenRiach Distillery. “We used to make peated [whisky],” he says. “That was simply to make sure we had supplies of peated whisky for our blends—to make sure that if something happened, we would be able to make peated whisky ourselves.” Now owned by Brown-Forman, BenRiach still makes both peated and unpeated single malts, as do many other distilleries including Bruichladdich, Knockdhu (anCnoc), and Springbank, whose three distinct styles—heavily peated, medium peated, and triple-distilled unpeated—are each sold under separate names, but are all classified as Campbeltown whisky. 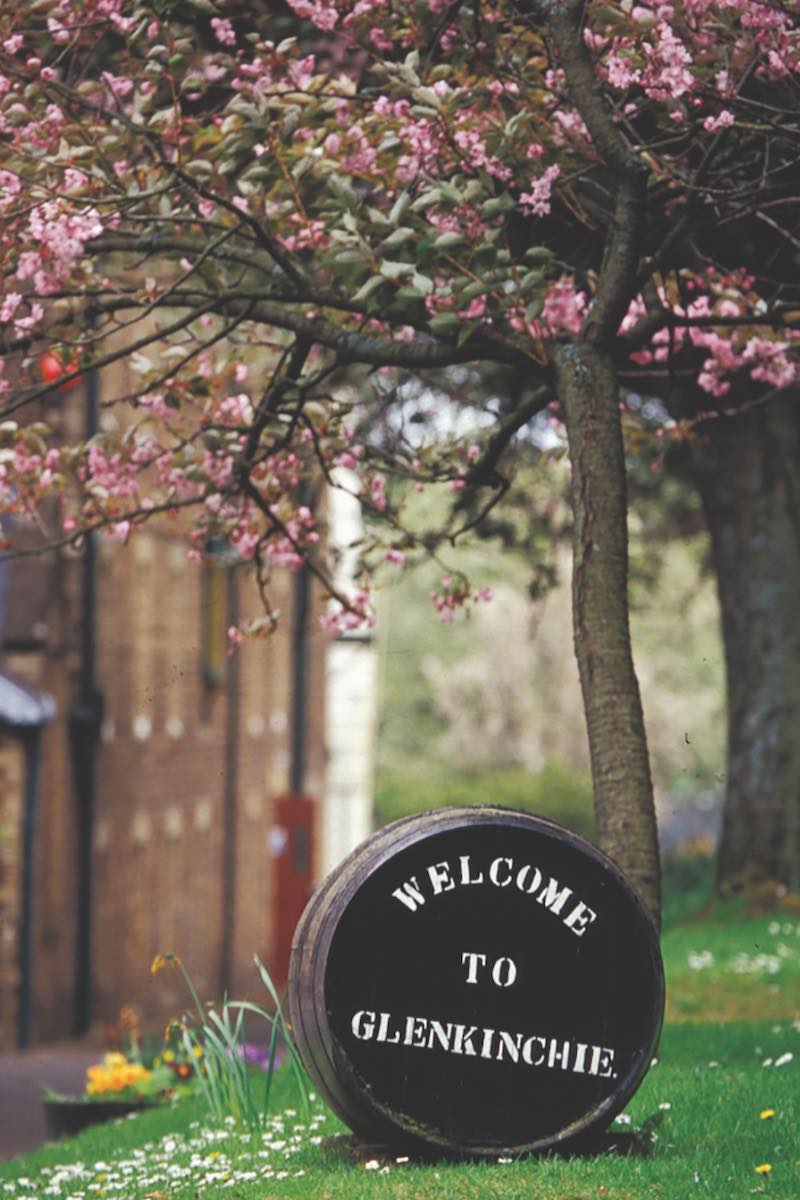 Lowland distillery Glenkinchie makes light, grassy single malt, which is typical of the style attributed to the region.

A whisky tastes the way it does not because of the distillery’s location, but because of the decisions of the distiller. Annandale, located deep in the Lowlands, is making both peated and unpeated whisky that bears little resemblance to the light, grassy flavor profile generally attributed to the region. In Edinburgh, Holyrood Distillery is deliberately creating multiple styles of single malt so that it can blend and marry them into unique expressions. “We’re looking for fruity/floral, sweet, spicy, and smoky styles,” says master distiller Jack Mayo, noting that any flavors attributed to, for example, Speyside whisky could just as easily be found in Lowland or Campbeltown whisky. “[We want to] push the limit on what can be created within the rules.”

John Fordyce, director and co-founder of The Borders Distillery in Hawick, rejects the idea of a Lowland style, affirming instead his desire to create a unique whisky through meticulous production choices. The Lowlands are associated with triple-distilled whisky, but—like most of its regional peers—Borders distills only twice. “We’re looking for elegance and floral notes, a kind of estery malt whisky—not too challenging, but intriguing,” Fordyce says. “We designed everything around that idea. I would hope that [in time] our style becomes identified with us.”

While the fluidity of “regional style” is obvious simply through comparison of neighboring distilleries that make vastly different types of whisky—for example, meaty Mortlach and floral Glenfiddich, located a mile apart—the ubiquitous idea of strict regional flavors persists. In many cases it is perpetuated by marketing, as with Douglas Laing & Co.’s Remarkable Regional Malts series of blended malts. Yet even Douglas Laing chairman Stewart Laing says understanding regional style is “very personal, and it probably shows a certain weakness in our argument.” He posits, however, an interpretation of regionality that’s simply the combination of individual distilleries’ malts. “[Our blended malts] can be archetypal because they are 100% from that region,” Laing says, noting that the company is constantly tweaking its blends based on available stocks.

Perhaps regional style, then, is less a platonic ideal—too narrow for the panoply of flavors produced in Scotland, which now has over 160 distilleries—and more a shifting and evolving embodiment of the state of scotch in a given area at a given moment. Regional style always depends first on the character of many distilleries’ whiskies—each deliberately engineered to be unique.