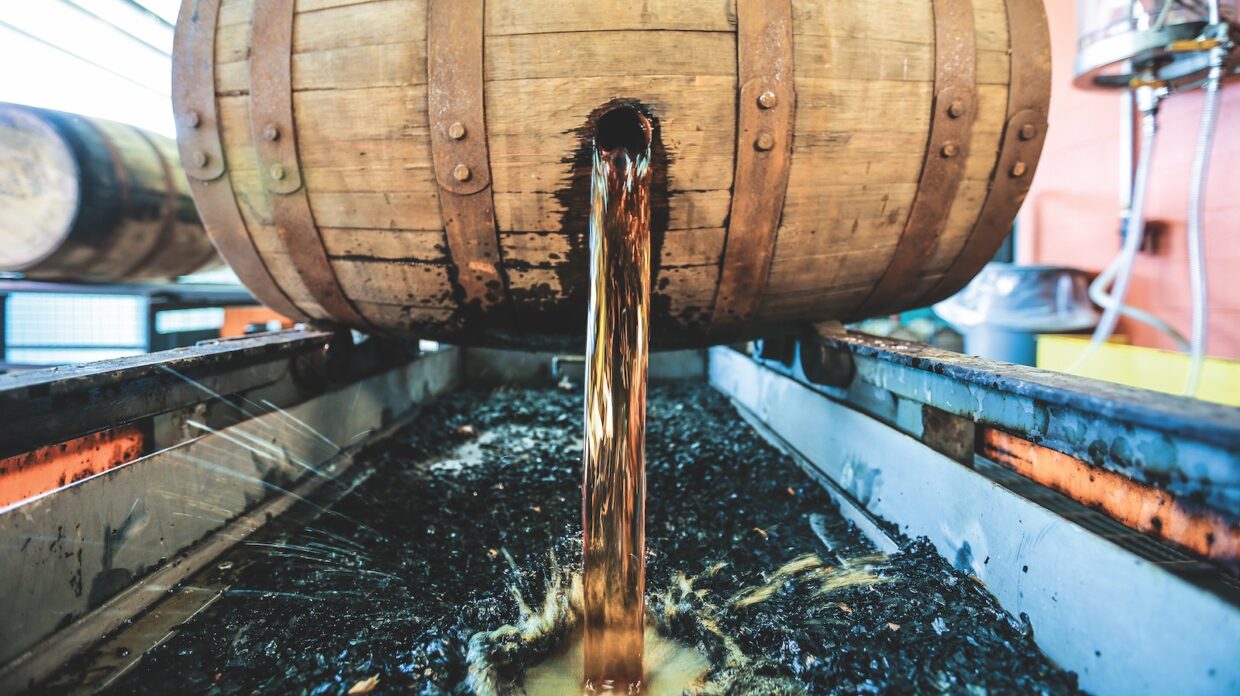 Mega-distillers like Jim Beam dump thousands of barrels at a time for a single batch.

At industrial-scale distilleries, moving whisky from barrels to bottles is a gargantuan task.

The barrel-dumping process is like filling in reverse: Conveyor belts move many casks at a time to a spot over the dump trough, then mechanical arms tip or flip them over to let the liquid run out. The whisky gets piped to colossal storage and blending tanks, rising several stories high and holding tens of thousands of gallons. At this magnitude the tanks are often set on massive scales because precision blending must be done by weight rather than volume. “Temperature in this room can change, and when you’re scaling up to this degree, weight won’t change,” whereas volume will, explains Hiram Walker master blender Don Livermore.

Before bottling, whiskies undergo sensory analysis in the on-site lab, checking characteristics against a standard range of aromas and flavors provided by the master blender. The liquid also goes through tests to check its chemical components, density, turbidity, pH, and other characteristics. Occasionally batches aren’t approved. “If it gets rejected, it doesn’t mean it’s bad,” explains Mark Lancaster, distillery manager at Invergordon. “It just means it’s not the recipe it’s supposed to be.” Typically, such whiskies will be used in a different blend or product.

Bottling is predictably automated, from rinsing and filling to labeling and capping, though workers are often needed to handle parts of the process for specialized bottles, such as wax dipping. The fastest lines can fill thousands of bottles an hour—12,000 at Jack Daniel and Tullamore D.E.W., and 21,000 at Heaven Hill. At that rate, it takes just a couple of hours to fill a tractor-trailer.

Large-scale distilling yields a lot of whisky—and a lot of extra stuff too, like wastewater, spent grain, and other byproducts. While smaller producers can often hook into municipal utilities, the biggest distilleries must process the leftovers themselves before disposing of them safely. Many byproducts that are worthless to the distillery, like fusel alcohol cut from the tails portion of distillation, have value in other industries. “We used to sell it for high-end perfume, because if it gets on you it sticks,” says Lancaster. “Bizarrely, it also went off to make artificial banana flavoring for milkshakes.”

These days, distilleries aim to minimize a plant’s environmental impact by recycling or reusing as much byproduct material and water as they can on-site. (Invergordon now uses the fusel alcohol to fuel its own boiler.) At new distilleries, green processes are built in. Spirits giant Diageo is currently constructing a distillery with a capacity of 10 million proof gallons for Bulleit and other American whiskeys in Lebanon, Kentucky. When it opens in 2021, the facility will be powered by renewable energy and fully carbon-neutral, avoiding 117,000 metric tons of carbon emissions—the equivalent of taking 25,000 cars off the road for a year.

Across the board, every part of the whisky-making process must be pitch-perfect; one small mistake or oversight can snowball into huge consequences further down the line. Many master distillers start their careers in engineering or quality control positions to cultivate the skills needed to manage such a huge operation. “I spent seven years working in quality control,” says Jeff Arnett, formerly Jack Daniel’s master distiller. “Quality touches everything at Jack Daniel, so it’s not something that we try to police into the end of the process.” The focus pays off; Arnett says that Jack Daniel’s gets almost no complaints. “Roughly on every 1 million bottles we ship, we’re going to get two or three [negative] comments back.”