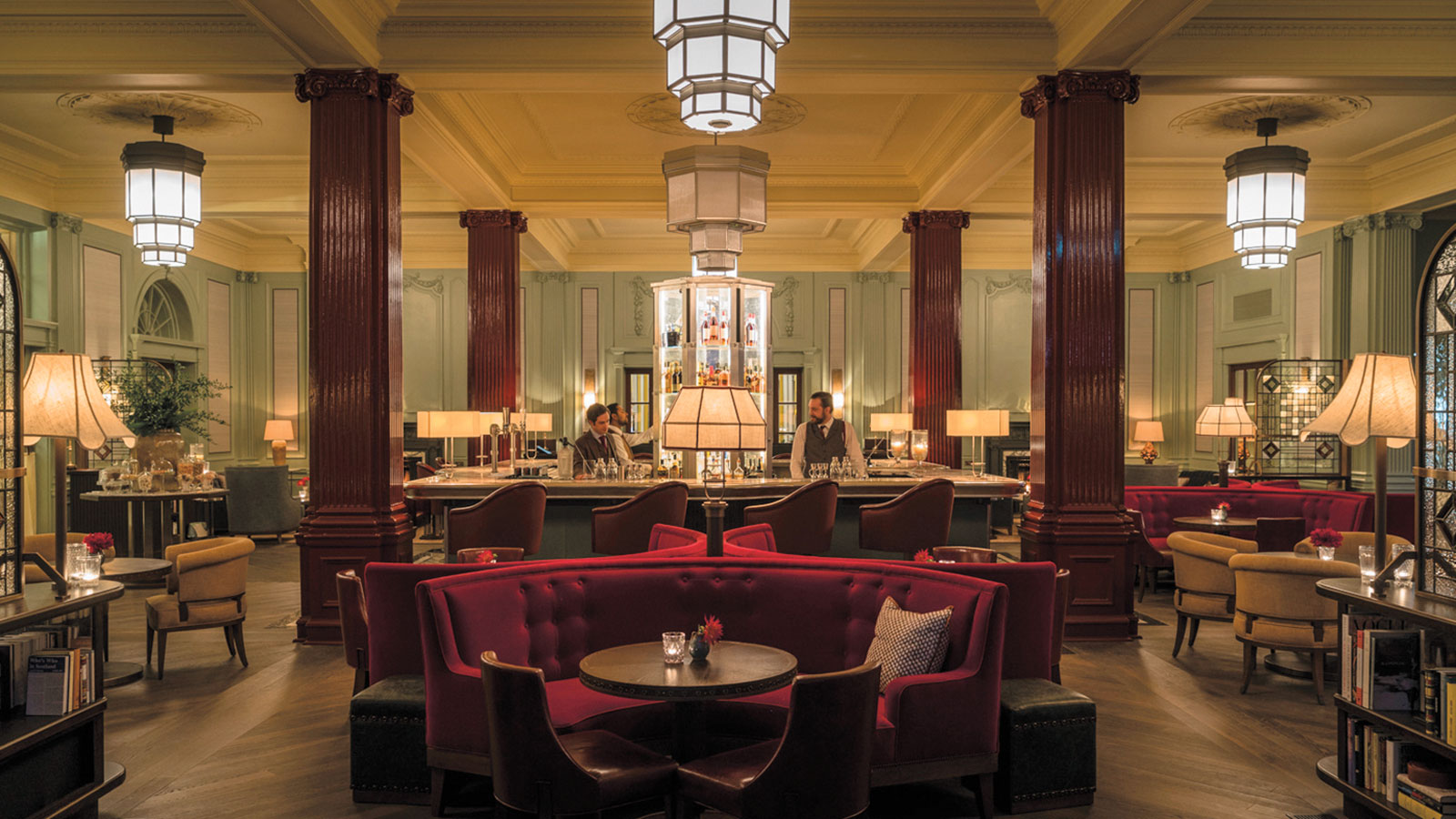 The Century Bar at Gleneagles Resort in Perthshire, Scotland

Part of being a luxury hotel is stocking a respectable whisky selection, but only a handful go the extra mile to woo whisky lovers with curated lists of rarities, private barrels, tasting programs, specialty whisky cocktails, food pairings, and more. Whisky regions like Ireland, Japan, and Kentucky play host to some great whisky hotels, but don’t discount Wisconsin, Beverly Hills, and Boston. Whisky fans appear in every corner of the globe and so do the hotels that cater to them.

10 Hotels That Cater to Whisky Lovers

21c Museum Hotel—Louisville, Kentucky
Louisville’s hippest hotel focuses on art and whiskey and succeeds at both, with just 91 guest rooms and suites built around a contemporary art museum. Its vibrant lobby scene is anchored by Proof on Main restaurant, offering regional foods and more than 250 different American, Japanese, and Scotch whiskies, showcasing around 175 bourbons. There are half a dozen WhistlePig ryes including Boss Hog ($65), half a dozen Van Winkle bourbons including Pappy Van Winkle 25 year old ($300), and a list of domestic rarities such as Blade & Bow 22 year old ($40). Through its 21c Selects program, Proof on Main also has around ten private barrel offerings available by the glass and sold by the bottle in their Louisville and Lexington retail shops. The bar has designed nine different whiskey flights with education in mind, ranging from single distillery to comparisons of whisky types. Knowledgeable bar staff stand ready to assemble a custom tasting flight or make a mean Mint Julep.
Don’t Miss: The multi-colored Asleep in the Cyclone, one of the museum-hotel’s art installations–and one of its suites; art you can sleep in.

Boston Harbor Hotel—Boston
Home to wine-centric restaurant Meritage, it’s easy to overlook this longtime Forbes 5-Star luxury hotel’s accomplished whisky program. Big mistake. Not only is it the city’s finest lodging, made even better with a recent extensive renovation, but its ground-level Rowes Wharf Bar has waterfront seating and offers what they claim to be the only Macallan 40 year old in Massachusetts. A generous 2-ounce pour runs $1,025 but you can try half an ounce for $300. They also offer 75 Scottish, Irish, American, and Japanese whiskies, plus rotating specialty whisky cocktails. Regulars love the Oysters & Scotch special, featuring two ounces of Bowmore 12 year old poured over half a dozen oysters, offered nightly (6-8 p.m., $25) or anytime ($38). The harborfront hotel also hosts impressive multi-course whisky pairing dinners roughly every other month and has a recurring pop-up lobby whisky bar that, in the summer, is moved outside to the waterfront pavilion and offers cigar rolling.
Don’t Miss: The direct water taxi service (8 minutes) from Logan airport, the nation’s best post-flight arrival.

Brooks Hotel—Dublin
Located in the heart of Dublin, Brooks is a warm, intimate boutique property with fewer than 100 rooms. A private chef’s garden and fresh ingredients from County Wicklow supply the acclaimed Francesca’s restaurant. Rooms are decorated with handcrafted wooden furniture, sumptuous fabrics, and modern Irish artwork. Brooks sits within an easy walk to some of Dublin’s most iconic bars and distilleries: the Temple Bar (450 whiskies and three-glass flights); Vat House (four-glass flights); Old Jameson Distillery (tours and tastings); and two of Dublin’s newest distilleries, Teeling and Pearse Lyons. To close the day, Brooks’ own Jasmine Bar offers over 70 Irish selections, including one of only 711 bottles of Celtic Cask Aon Single Cask (€20) and one of just 114 single cask bottles of Willie Napier 44 year old (€100). Beyond Irish whiskey, over 100 global selections span the whisky world from Sweden to Sri Lanka.
Don’t Miss: The traditional Irish breakfast, included with stay, at Francesca’s, famous for its homemade Irish brown soda bread. 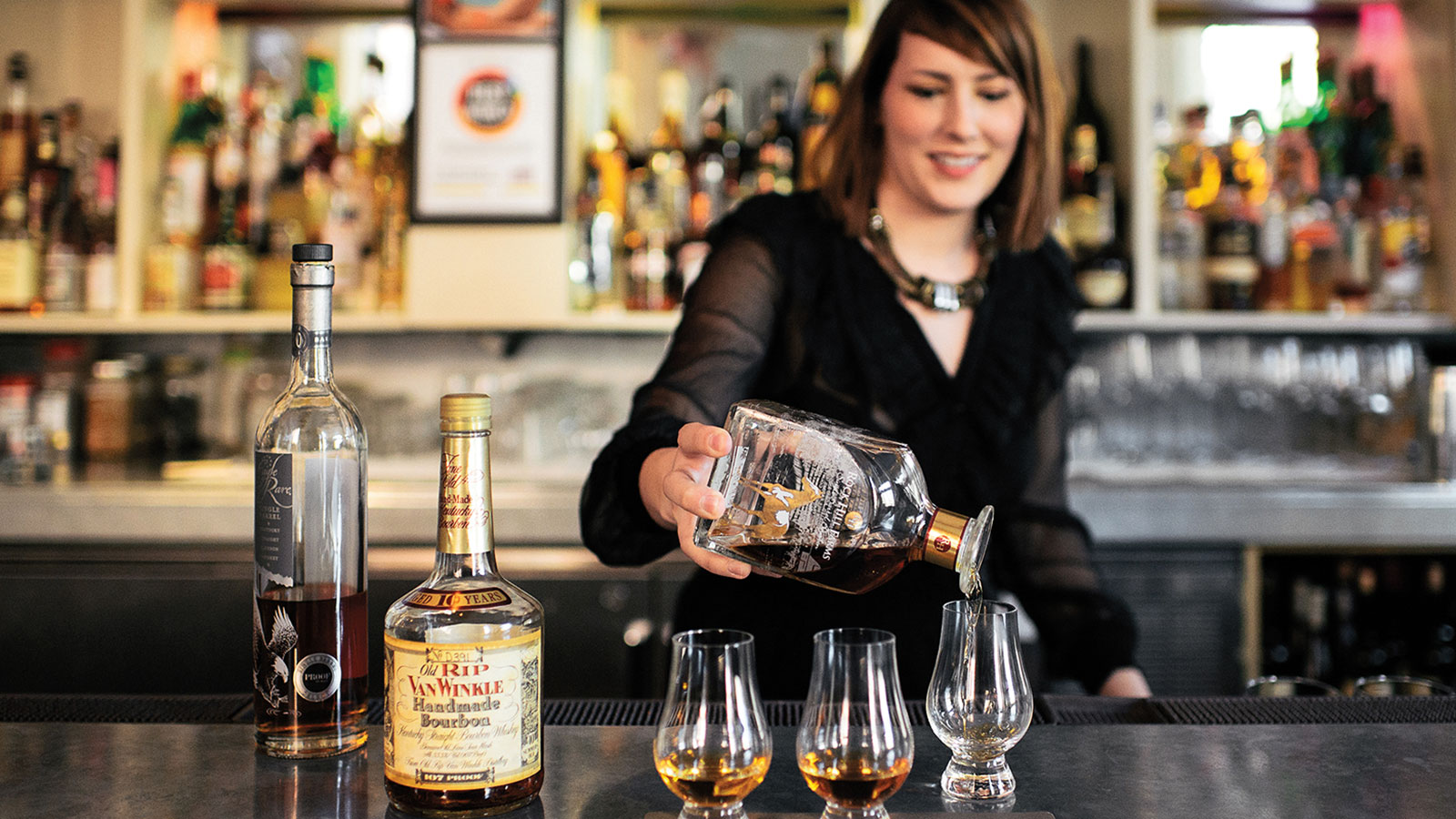 Proof on Main at the 21c in Louisville, Kentucky.

The Connaught—London, England
An urban Forbes 5-star hotel that loves whisky, the 121-room Connaught has long been one of Europe’s most exclusive luxury lodgings. The old-school Connaught Bar has earned many awards, including the title of World’s Best Cocktail Bar 2016 from Tales of the Cocktail. The 80-bottle collection focuses on unique offerings, including what is believed to be the city’s only bottle of Macallan 51 year old, Bowmore 1968, Ardbeg 1974, and Hibiki 30 year old. The hotel partnered with Dalmore to create a custom Connaught Cask single malt, aged in a trio of cabernet, sherry, and port casks. The Connaught Cask is only sold here, in a gift set with a cocktail shaker and glassware (£315). The hotel offers cocktail masterclasses for guests and has two other bars, along with a Michelin 2-star restaurant by Hélène Darroze and a new eatery by legendary chef Jean-Georges Vongerichten.
Don’t Miss: The signature 1815 Whiskey Sour from the bar’s award-winning director of mixology, Agostino Perrone, using the Connaught Cask single malt.

Destination Kohler—Kohler, Wisconsin
The Kohler family, of faucet fame, has transformed their factory-town headquarters into a resort with multiple hotels, three Wine Spectator-awarded restaurants, spas, and four golf courses, including PGA Championship venue Whistling Straits. The American Club hotel gets 5 stars from Forbes, its spa another 5, and its Immigrant Restaurant 4—all the Forbes stars in Wisconsin. The Winery Bar always has more than 200 whiskies on offer, including 150 scotches. The “rare menu” includes picks like Highland Park 40 year old and Odin, The John Walker, several bottlings from The Last Drop, Macallan Reflexion, No. 6, and M, and Balvenie 50 year old—one of just 131 bottles of the rarity, which is only served in four places in the U.S. A standard pour runs $4,000, but a 1/8-ounce taste can be had for $495. These can also be enjoyed on the American Club’s cigar terrace, while the Straits Clubhouse has more than 40 fine whiskies, and Blackwolf Run’s clubhouse another 20.
Don’t Miss: Play the walking-only Straits course with a caddie and you will be spoiled forever—the PGA Championship venue is ranked fifth-best in the nation and the finest Pete Dye design on earth.

Gleneagles Resort—Perthshire, Scotland
From top to bottom, Gleneagles’ facilities are world class for golf, equestrian activities, shooting, fishing, off-road driving, and of course, lodging and dining. The finest accommodations are in the Whisky Suites, the finest dining at Scotland’s only Michelin 2-star restaurant, Restaurant Andrew Fairlie. Fairlie, a Scottish Chef of the Year, prepares his signature dish by smoking lobster over whisky cask staves. Gleneagles just finished a massive, multi-million pound renovation that added two significant new bars. The American Bar houses all four Gordon & MacPhail Private Collection Ultra labels, making it the only bar in the world with a full set. They have about 60 other American and Scotch whisky selections, including a Glen Grant 50 year old (£1,100) and 1953 Glenfarclas (£900). But the new Century Bar is even more whisky-centric, with a deep list featuring many international whiskies and specialty whisky cocktails.
Don’t Miss: With a thirteen-stand sporting clay range and competition quality shotguns, the resort is one of the best places to try shooting. Then retire to the Century Bar for a Smoking Gun: Balvenie DoubleWood, vermouth, maraschino, bitters, and birch water, presented in a puff of gunpowder smoke.

MGM Grand—Las Vegas
The MGM has several notable whisky watering holes under one roof, along with the two most luxurious lodging options in Vegas: Skylofts and the Mansion (both come with butlers). Star chef Tom Colicchio’s Craftsteak, recipient of Wine Spectator’s Best of Award of Excellence since 2007, serves some of the finest meats in town, including true A5 wagyu imported from Japan, alongside 230 whiskies, mostly scotch and bourbon, with plenty of Pappy Van Winkle to go around—the rare 23 year old goes for $400 a glass. Choose from among 22 3/4-ounce pour flights, like the Dirty Thirty: four 30 year old whiskies ($175). Any time you need a whisky, MGM’s Whiskey Down is there to serve. The 24-hour specialty whisky bar houses ten private bourbon and scotch casks and more than a hundred other whiskies, plus craft cocktails and Davidoff cigar and whisky pairings. Chef Michael Mina’s casual Pub 1842 offers dozens of bourbons, ryes, and whiskeys from small regional producers. Then there is Morimoto, from the original Iron Chef, with a slate of Japanese labels from Nikka, Ichiro’s, Akashi, Hakushu, and Hibiki.
Don’t Miss: Craftsteak’s 1-ounce whisky pairings with dinner, curated when you order. 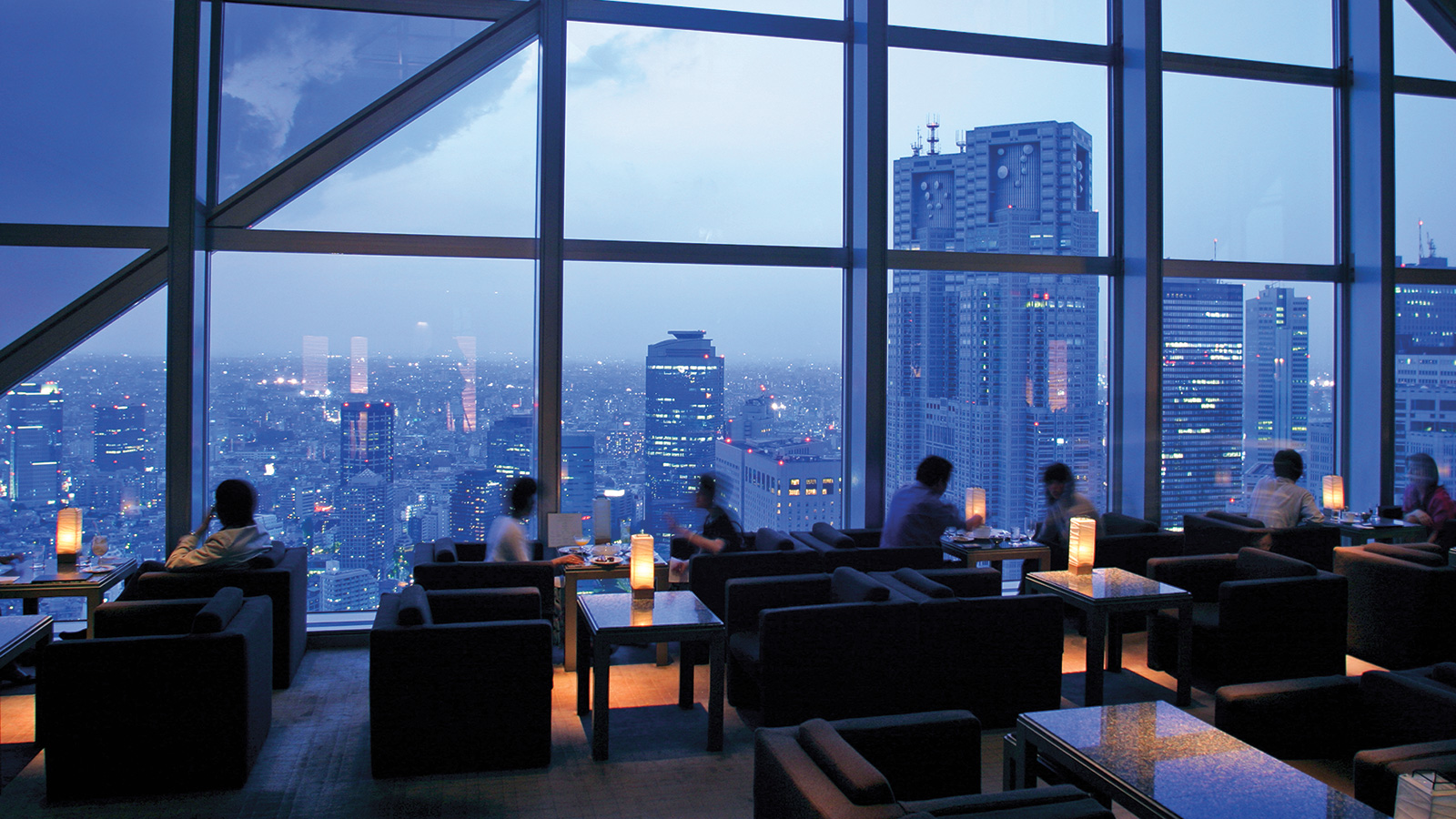 New York Bar at the Parky Hyatt Tokyo in Japan.

Montage—Beverly Hills, California
There are six luxury Montage resorts worldwide, from the beaches of Hawaii to the ski slopes of Utah’s Deer Valley, but the urban Beverly Hills enclave includes a mix of wonderful hotel rooms and over-the-top residences. It is also home to the ultra-exclusive Anglo-themed £10 bar, a VIP spot that is open only to hotel guests by reservation. Its whisky list includes over 20 different labels from Macallan, including the 65 year old Peerless Spirit ($5,000 a dram), of which only two casks exist, and Royal Marriage, whose price is available “upon request.” Other rarities include The Last Drop 50 year old ($530) and Compass Box The General ($224). Tasting flights range from “Teens,” a trio of 17-18 year olds ($104), to “Rare,” including Macallan 57 year old and 1968 Highland Park ($2,256). Attention to detail in presentation is unrivaled: everything is served in Lalique crystal and the water used for the ice spheres is imported from the Scottish Highlands.
Don’t Miss: With flat-screen TVs, seating for six, and bar and restaurant service, the private cabanas at the hotel’s rooftop saltwater pool offer a luxurious escape from the surrounding metropolis.

Old Course Hotel—St Andrews, Scotland
Overlooking the “Road Hole” 17th, the most famous hole on the world’s most famous golf course, this luxury hotel is the top choice in the game’s birthplace. The top floor Road Hole Bar is one of the finest on earth, with 214 single malt scotches including many from closed distilleries. Beyond that are Scottish blends, blended malts, and single grains, plus whiskies from Sweden, Wales, India, and more. They carry an extensive range from Diageo’s Flora and Fauna collection and dozens of very rare labels, such as Caperdonich 1980 (£21), Killyloch 1967 (£250), and Ben Wyvis 37 year old—likely the last bottling ever from one of Scotland’s shortest-lived distilleries, a rarity worth the £300 splurge. In fact, you can order a tasting flight that includes only whiskies from closed distilleries, opt for a whisky cocktail, or pair your dram with a cigar. A world-class spa, standout restaurants, and a private golf course will satisfy whisky lovers and their companions.
Don’t miss: The Whisky & Tablet sundae, the hotel’s signature dessert, which uses whisky in both the ice cream and traditional Scottish tablet, a dense fudge.

Park Hyatt—Tokyo
It’s been fourteen years since the movie Lost in Translation hit theaters, yet whisky lovers still venture here to visit the bar where Bill Murray filmed many of his scenes. Murray’s character, a movie star turned celebrity pitchman for Suntory whisky, was fiction, but the Hyatt, its New York Bar, and 17 year old Hibiki are all very real. A modern luxury hotel, the Hyatt sits atop a 52-story tower by architect Dr. Kenzo Tange. Guests enjoy spacious, apartment-style rooms and suites, the famous spa, and high-altitude indoor pool. The New York Grill on the top floor offers Kobe steak paired with grand views of Mt. Fuji. Adjacent is the New York Bar, with live jazz most nights and an extensive selection of Japanese whiskies, including Hibiki 30 year old ($226) and a “Japanese Whisky Experience” tasting flight with Yoichi, Miyagikyo, and Yamazaki 18 or Hakushu 18 year old ($866). Explore the Kozue restaurant and atrium-level Peak Bar & Grill for even more whisky!
Don’t Miss: The Peak Bar’s “Japanese cocktail” menu offers drinks like the Purple Town, with Miyagikyo whisky, frozen plum wine, and soda.