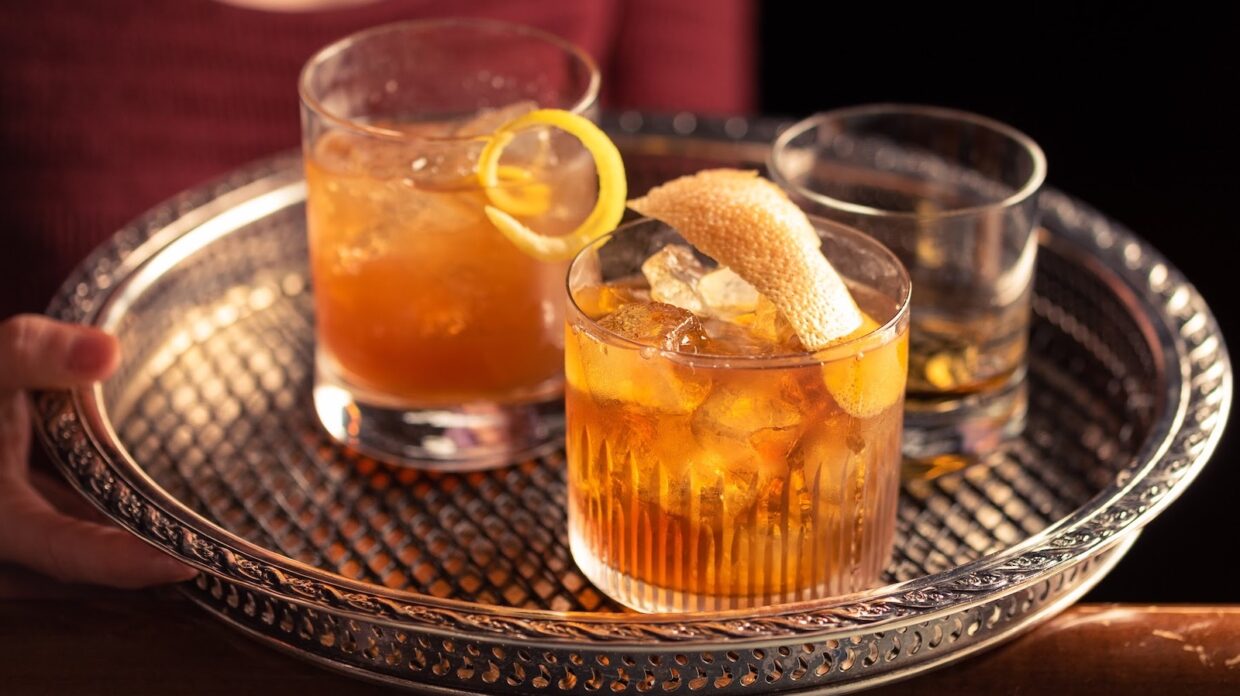 Fat-washing can add rich texture and body to whisky, creating a lush cocktail. Louisville, Kentucky bar Hell or High Water uses a brown butter-washed bourbon in some of its drinks. (Photo courtesy of Hell or High Water)

Infusing whisky with fruits, herbs, and spices can impart new layers of flavor to an already complex drink. When an infusion involves fatty ingredients—like brown butter, bacon fat, or coconut oil—the result of the “fat wash” is even more profound. “When you fat-wash a whisky, you aren’t just adding the flavor of the fat to the spirit, you’re also adding texture and weight,” says Alex Jump, lead bartender at Death & Co. Denver. “That oily texture can translate in really cool ways when putting that whisky in a cocktail.”

Just about any fatty ingredient can be used. “I usually go for tasting notes” when thinking about what ingredient to fat-wash a whiskey with, says Valentino Longo, head bartender at Le Sirenuse at the Four Seasons Miami, and Bombay Sapphire’s Most Imaginative Bartender 2020. “For example, some bourbons, on the nose, have a nutty, caramel, exotic fruit taste, so I’d do a fat wash with hazelnuts or banana oil” which complement those aromas.

Fat-washing at home is a straightforward process. You need whisky, a fat of choice, and a few simple tools that you likely already own. There are recommended recipes at the end of this article for both fat-washed whiskies and cocktails to use them in, but experimentation is encouraged. Follow the steps below and soon you’ll be on your way to a richer cocktail.

How to Make Your Own Fat-Washed Whiskey in 5 Steps

This is an overview of fat washing. The process will vary depending on the fat being used; following a recipe with precise specifications, like the three examples below, is recommended.

1. Assemble Your Tools
No special tools are required for fat-washing, and most of what’s needed, such as a saucepan and whisk, can be commonly found in a regular home kitchen. Bartenders like Jump use gram scales for the most accurate measurements, but home mixologists will be fine measuring with standard cups, tablespoons, teaspoons, and jiggers.

The solution of whisky and fat needs time to infuse and then separate. “You’ll be storing the infusion in the freezer, so make sure you have a container that is both large enough for the batch you’re making, and also has a lid,” Jump advises. (Try a Pyrex dish.)

Filtering the fat-washed whisky is a key step, and doubling up with both a fine mesh strainer and a second, finer filter is best. “Cheesecloth works well, but coffee filters really get the job done,” Jump adds. Rinse the coffee filter with a little water before straining your infusion through it to wash away any loose fibers.

2. Have a Cocktail in Mind
“Think about what you want your cocktail to taste like and work from there,” advises Jump. Fat washes typically lend themselves to spirit-forward cocktails such as the Old Fashioned or Manhattan, but can also shine in Sours. Avoid using fat-washed whisky in a cocktail with carbonation, as it can be tricky to balance.

3. Consider the Flavor Match
First things first—if anyone else will be drinking the whisky, ask about dietary restrictions. “Be sure to take proper precautions by checking for allergies,” says Matt Brown, beverage director of Hell or High Water in Louisville, Kentucky.

After you choose the whisky, decide whether you’d like to complement or contrast its flavors with the fatty ingredient. For example, bourbon often has nutty notes, and a nut butter would complement those. Some foolproof combinations include bourbon and brown butter or bacon fat, scotch and coconut oil, and rye and peanut butter.

4. Prep, Measure, Mix
When experimenting with fat-washing, it’s wise to start with a smaller volume the first time around just in case it doesn’t go as planned. If you like the final result, scale up and make a larger batch.

While there’s no general rule of thumb for the ratio of fat to liquid, keep in mind that pungent flavors (e.g. peanut and meat fats) typically require less fat to liquid to achieve the desired texture and flavor. More subtle fats, such as coconut oil, may require a larger amount. Start at 3% fat to the total volume of the liquid and increase as necessary.

Various fats require different techniques to get them into a form that can be combined with whisky, so follow recipe instructions.

5. Freeze, Strain, and Store
Once the fat and whisky are mixed, it’s time to pop the container in the freezer to allow the fat to solidify, which separates larger solids from the spirit while leaving flavor behind. Strain the fat-washed whisky through a fine strainer and cheesecloth or coffee filter into a fresh container.

Some fat-washed whiskies, like those made with oil and nut butter, are shelf-stable, but if the wash included a meat or dairy product, it’s best to store the liquid in the fridge. Under these conditions, the fat-washed whisky will keep for about two weeks.

Brown Butter-Washed Bourbon
Louisville, Kentucky whiskey bar Hell or High Water uses this fat-washed bourbon in cocktails like the Hot Toddy. It adds weight and mouthfeel to the drink, transforming what would otherwise be a familiar experience into something utterly unique.

Get the Recipe: Brown Butter-Washed Bourbon

Tahini-Washed Rye
Created by the team at Death & Co. in Denver, this combines Rittenhouse rye with nutty sesame paste. Use it in the Private Eyes, a spirituous and sweet cocktail laced with raspberry liqueur.

Get the Recipe: Tahini-Washed Rye and Private Eyes Cocktail

Hazelnut Butter-Washed Bourbon
Though bourbon often has peanut notes, fat-washing with hazelnut butter unlocks new dimensions of flavor. Use this custom whiskey, created by Valentino Longo of La Sirenuse at Four Seasons Miami, in the Terra cocktail, which also features sherry and amaro.

Get the Recipe: Hazelnut Butter-Washed Bourbon and Terra Cocktail