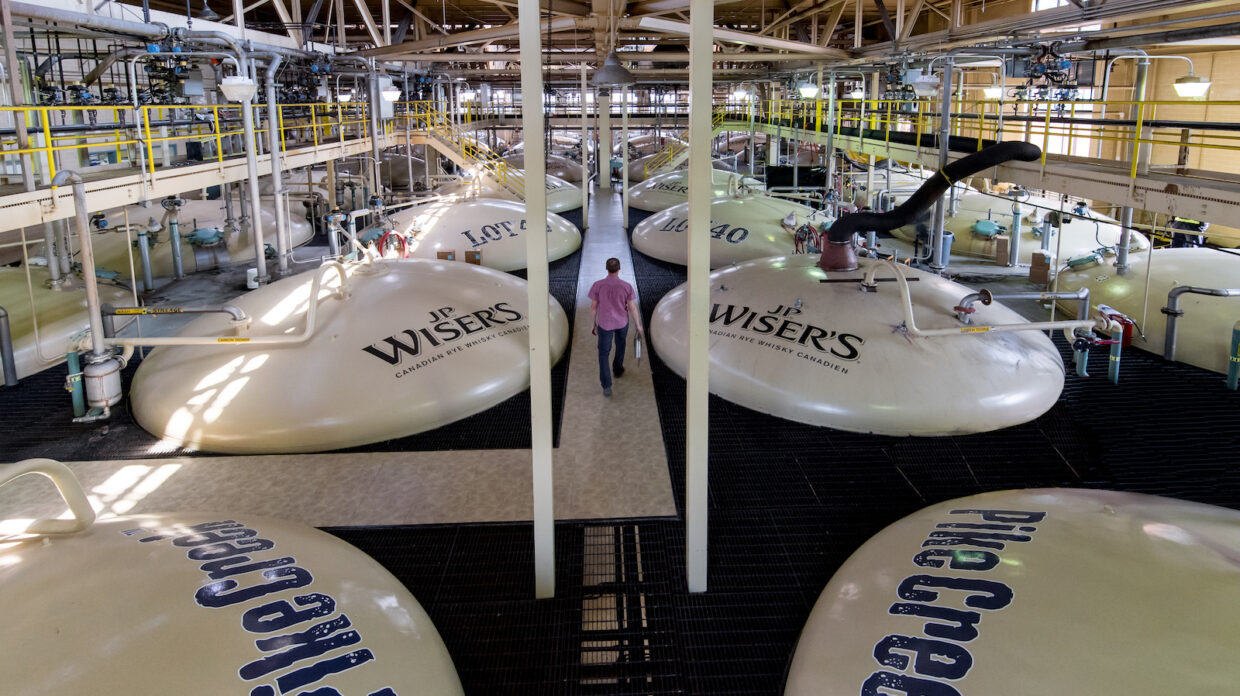 Master blender Don Livermore strides among the fermenters at Hiram Walker. Nitrogen is added to the distillery’s fermentations to increase alcohol yield. (Photo by Phot-O-Holic Imagery)

Yeast transforms the sugar into alcohol through fermentation, and when it comes to making whisky at scale, fermentation capacity is often the limiting factor; the more tanks a distillery has, the more it can ferment. While some yeast strains are bred for efficiency, distillers also want the yeast to create certain flavors, so they have to strike a balance between speed and desired outcome.

Depending on the grain or mashbill, most fermentations need three to five days, though some can be completed in as little as 48 hours. Often distilleries tweak the process to boost efficiency further. At Hiram Walker, fermentation is aided by nitrogen, which increases the final alcohol yield from 13% to around 16% alcohol by volume (ABV). Master blender Don Livermore compares it to enriching soil for agriculture. “What helps your lawn grow?” he says. “You add fertilizer. Same thing with yeast.” More alcohol at the point of fermentation makes it quicker to reach spirit strength in the still.

Invergordon uses a unique, complex continuous fermentation “bub” system that entails filling multiple vessels with wort at a time, adding to each incrementally until all are full and at the same stage of fermentation. Then some of the liquid is drained into a washback to continue fermenting, while the original vessels are topped up with fresh wort. “We’re trying to keep the yeast in its exponential phase,” explains distillery manager Mark Lancaster, noting that the bub system allows Invergordon to fill nine washbacks with a single pitch of yeast, just as a sourdough starter can grow big enough to make multiple loaves of bread.

But the desirable flavors that come from fermentation remain foremost. Any mistakes in this step will show in the final whisky. “There’s no silver bullet, but if there were, it’d be attached to the yeast,” says Conor O’Driscoll, master distiller at Heaven Hill, where 17 fermenters holding 124,000 gallons each bubble around the clock. O’Driscoll explains that, for example, adding yeast to mash that’s a few degrees too hot or too cold can disrupt the process, noting, “Stressed yeast makes nasty flavors.”

Ready for the Next Step? Time to Distill