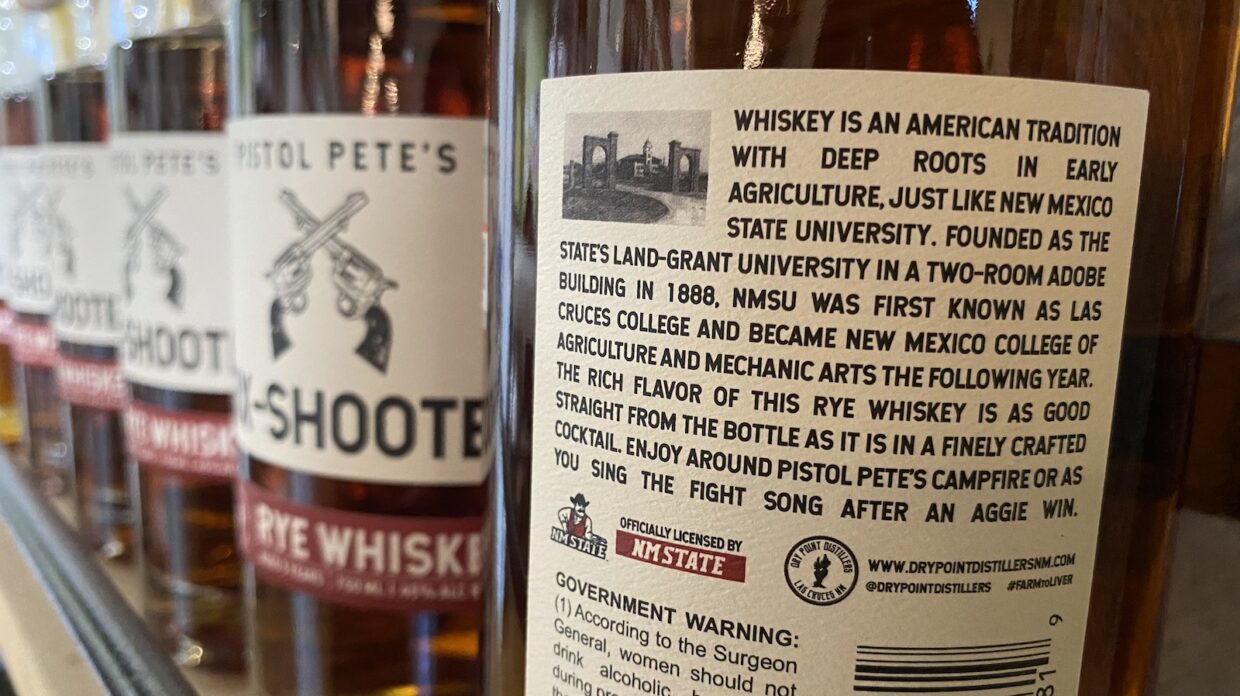 Pistol Pete Six-Shooter rye was named after the New Mexico State mascot and made in collaboration with Dry Point Distillers.

College can be the setting for many formative experiences; if you didn’t develop an appreciation for whiskey in your university years, perhaps you discovered a taste for it. Recently, colleges have been striking licensing deals with breweries—like Old Tuffy, a partnership between NC State and New Belgium Brewing—but until now no one had branched into spirits. Breaking that ground is New Mexico State University (NMSU), which is launching a collaborative whiskey to raise funds for its athletic department. Made in partnership with Las Cruces-based Dry Point Distillers, Pistol Pete Six-Shooter rye joins the school’s existing branded beer and wine.

In a year where many college campuses have reduced attendance at athletic events, the licensing deals allow NMSU to make up some of its lost ticket sales. “While I don’t think one product is going to hit it big, when you start adding the licensing revenue from a spirit and a wine and a beer, and some of these other consumables that we have hopefully coming out, that adds up to something,” says Mario Moccia, director of athletics at NMSU. “We’re always trying to reduce the budgetary burden from the school or from the state of New Mexico. So this is a way of being entrepreneurial and creating new revenue streams.”

Moccia says that like the beer and wine, the whiskey will be marketed responsibly and that he hopes that alumni and legal-drinking-age fans would be able to enjoy the line of beverages around games and events. “I think the success of the first two products broke down some barriers of thought,” he says of getting sign-off from the school. “And I think it’s a compelling story. It’s a small business, it’s owned by an alum, and those are two overriding factors of saying, ‘Let’s get in this category.’”

Pistol Pete Six-Shooter is named after NMSU’s mascot, a gun-toting cowboy, and though it was produced in collaboration with Dry Point, the whiskey itself is 3 year old MGP rye. Dry Point was founded just two years ago and produces a gin, vodka, and blue corn bourbon. While the distillery hopes to one day supply the whiskey for Pistol Pete, NMSU wanted something with age now. 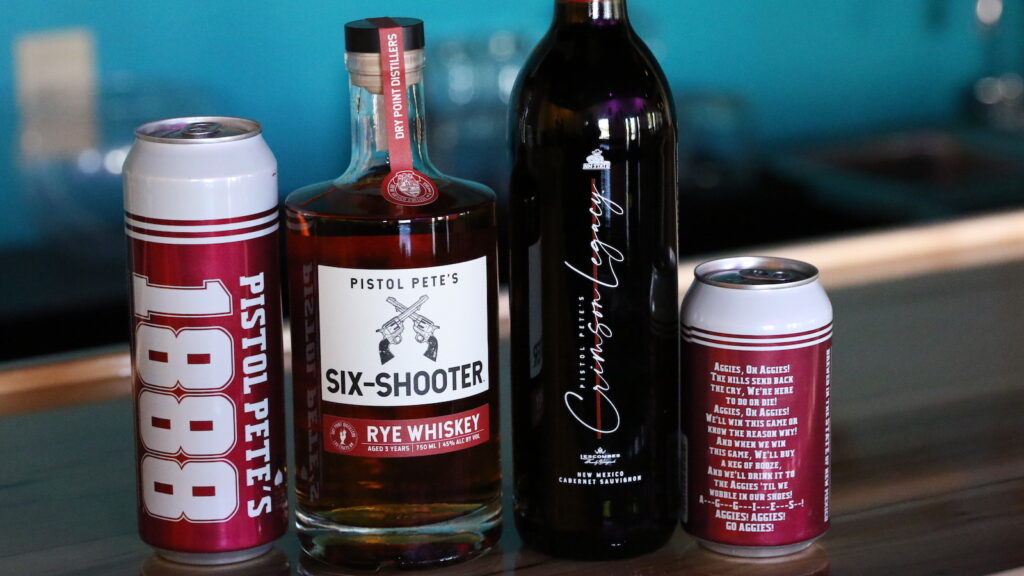 “Mario comes to me and says, ‘Hey, we want an aged whiskey’ and it’s like, well, let’s talk in two years, three years from now,” says Chris Schaefer, head distiller at Dry Point. After speaking with Moccia, Schaefer reached out to his distilling contacts and received a number of samples, eventually deciding on a 95% rye-5% malted barley whiskey. “They’re supplying me with this product as sort of a placeholder as we build our infrastructure, build our whiskey program to the point where we can in fact ferment, distill, and age this product in-house.”

The whiskey is bottled at 45% ABV and will cost $37, with 12% of sales going back to the NMSU athletic department as part of its agreement with the Collegiate Licensing Co. There was some discussion about pursuing a tequila, given New Mexico’s geographic placement, but ultimately, the team at NMSU decided upon a more American spirit. “For me personally, when I think about Pistol Pete on the open range, I don’t think about him drinking tequila—I think about him more drinking a whiskey in the great American Southwest,” Moccia says. For now, the Pistol Pete Six-Shooter is for sale at Dry Point and in the Las Cruces area, with plans to expand to Albuquerque and Santa Fe before Christmas. Schaefer says the whiskey will give Dry Point an opportunity to grow its business in the region before reaching additional states.

Maintaining local connections was important for Moccia. NMSU offers a brewery engineering minor as well as a study abroad program for brewing and distilling students. While engineering students weren’t involved in the creation of this whiskey, a graphic design alum created the artwork for it, and an upper-level marketing class was consulted on the product’s name, look, colors, and design.

“The one thing about New Mexico State University—it’s a smaller school without tremendous budget,” Moccia says. “For us to say we are the first in the country [to offer our own whiskey], hopefully it’s a feather in all of our caps—certainly for the athletic program. So often we follow on things and now we get a chance to lead on this.”