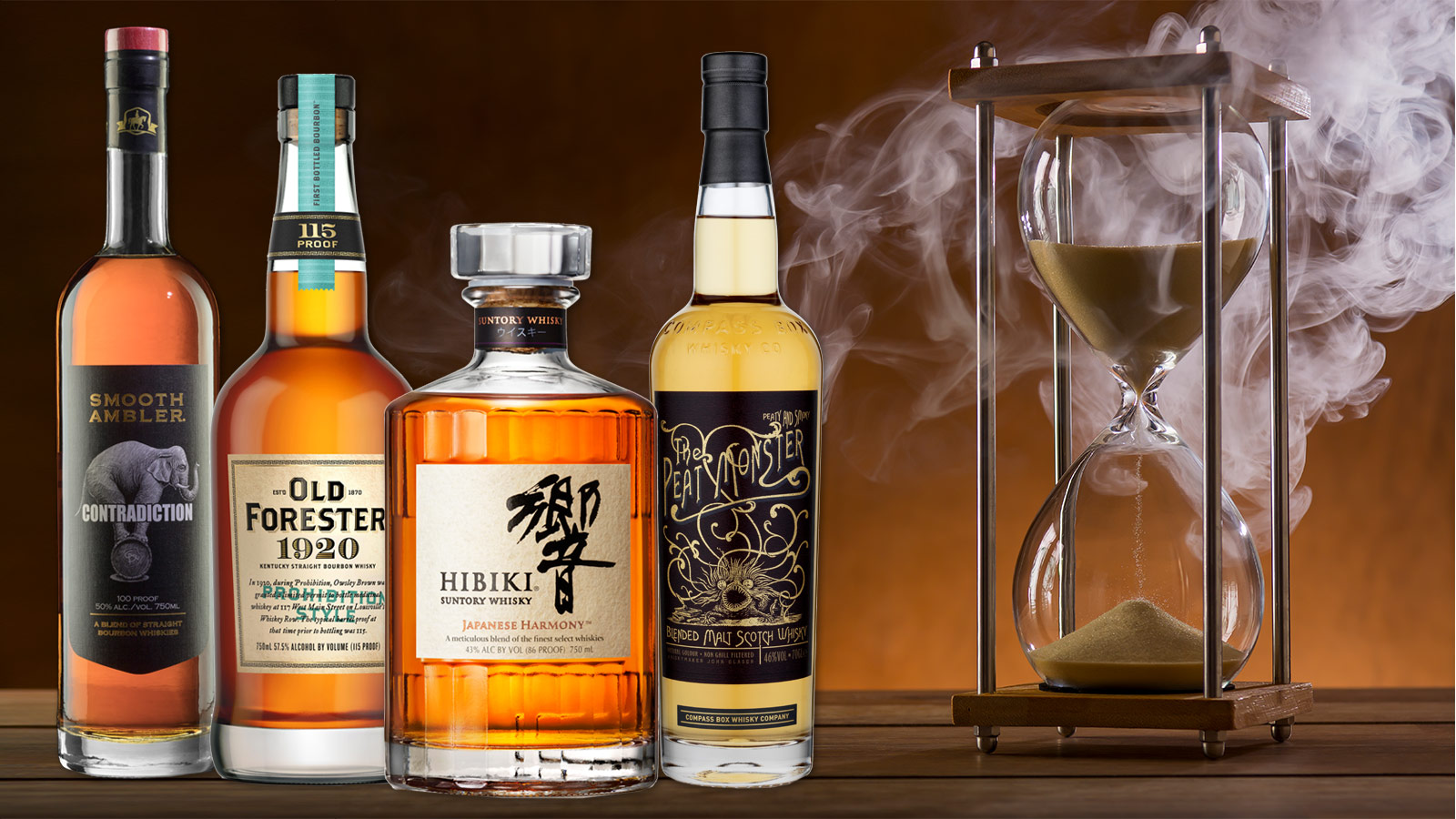 When searching out a new bottle of whisky to try, what clues tip you off to its flavor? Style, of course—a single malt will taste very different from a bourbon. Whether Ireland, Canada, or another country or region, origin also has an impact on flavor. Maybe you also consider its age. If the whisky’s label says 12 years old, is that a guarantee of good flavor?

There’s a lot more to flavor and quality than just years in a barrel, and an age statement provides only a sliver of information. Legally, a label can only state the age of the youngest whisky used in the final blend, but often that bottle contains much older liquid too. Master blenders have to achieve the same flavor profile with every batch, and not all whiskies mature at the same rate. So even when the label says 12 years old, chances are good that you’re getting some older whisky in there.

And that’s why non-age statement (NAS) whiskies—bottles that say nothing about how old the whisky inside is—are worth tasting too. Without the constraint of an age statement, the master blender has the freedom to work with whiskies of all ages and create new flavor profiles that fall outside the expected ladder of numbers. Case in point: Wild Turkey Master’s Keep Decades, a non-age statement bourbon that blends whiskeys ranging in age from 10 to 20 years old, and, at 94 points, the No.-3 choice in Whisky Advocate’s 2017 Top 20.

If that’s not enough to convince you that NAS whiskies can hold their own against their numbered brethren, here are four more bottles to try. Each scored 90 points or higher and costs $65 or less.

Compass Box The Peat Monster—90 points, $60
It’s impossible to talk about the great quality possible with NAS whiskies without mentioning Compass Box. Founder John Glaser and his team have been redefining blended scotch since 2000, and their core line of everyday whiskies never disappoints. Peat Monster tastes exactly how you’d expect, delivering a whopping blaze of fiery, earthy peat, tempered by vanilla, citrus, herbal notes, and a creamy mouthfeel. It makes for a heck of a daily dram—totally satisfying for the most ardent peatheads. Glaser has been pushing for more transparency in scotch labels, hoping to be able to reveal the ages of the whiskies used in his blends, but his quest hasn’t been successful as yet. Read the full review.

Old Forester 1920 Prohibition Edition—91 points, $60
Bourbon can get away with having no age statement more easily than scotch, which for decades marketed the message that age equals quality. The use of new charred barrels and the temperature swings in a Kentucky warehouse both mean that bourbon matures more quickly. When a bourbon is labeled as “straight,” it must be at least 2 years old, and if it’s older than 4 years, no age statement is required. This Old Forester, which is meant to mimic the style of medicinal bourbon made at the distillery during Prohibition, exceeds the 4-year age-statement limit but gives no other information about how long it spent in barrel. Its massive proof—57.5% ABV—presents at first with baking spices, caramel, and cherries, but belies the subtle flavors of honey, crème brûlée, citrus, and other fruits that emerge later on. Read the full review.

Hibiki Japanese Harmony—90 points, $65
In recent years, some distilleries have discontinued age-statement whiskies (or raised the prices astronomically) due to diminishing stocks and high demand, replacing them with NAS expressions. The supply and demand problem has been particularly acute for Japanese distillers, as the rest of the world developed a powerful thirst for their single malts and blends that they didn’t see coming. Hibiki’s age-statement expressions have been hard to come by lately, but parent company Suntory launched Japanese Harmony in 2015 to provide fans with an affordable and accessible option. Displaying the best of Japanese blending—balance and elegance, with nuanced complexity—it offers bright fruit, sweet toffee and cookie flavors, and a delicate whiff of smoke. Read the full review.

Smooth Ambler Contradiction—90 points, $55
Like many start-up distillers, West Virginia’s Smooth Ambler generated revenue in the early years of its existence by buying whiskey from MGP and other distilleries to sell under its Old Scout label. At the same time, it was distilling and aging its own bourbon. Contradiction puts together both types of liquid, combining 4-5 year old and 9 year old stock from MGP with house-made wheated bourbon at 4-5 years old. The result is a sweet, oak-driven whiskey with flavors of molasses, peanuts, and spices. Read the full review.