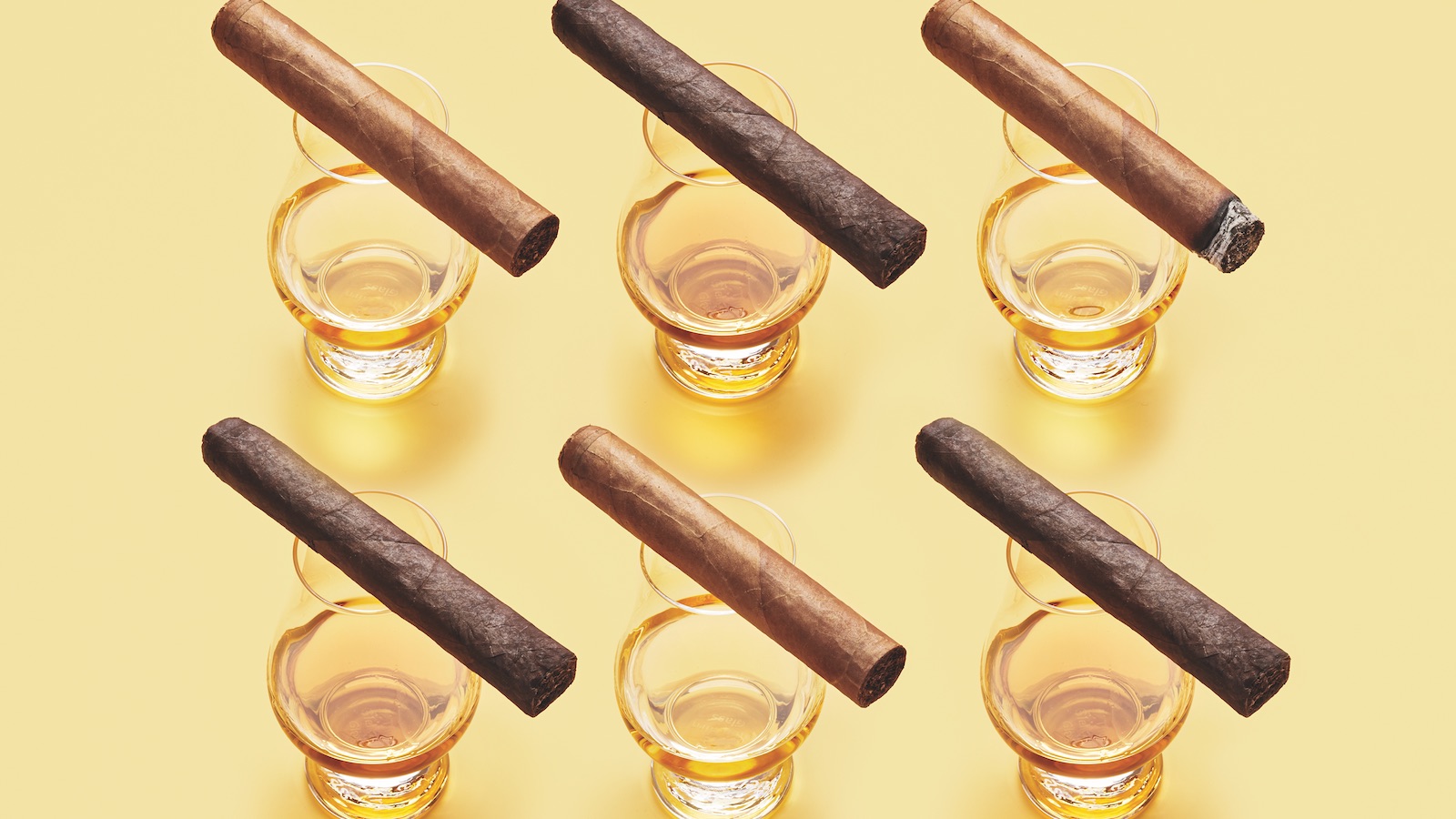 Cigars and brown spirits, like bourbon, rum, and cognac, are a match made in heaven. (Photo by Jeff Harris)

In a series of old candy commercials the actors would bump into each other, accidentally mixing peanut butter with chocolate, and voila, the peanut butter cup was invented: two great tastes that taste great together. One can imagine a similar conjunction of cigars and spirits: one reveler arrives with cigars, the other with whisky; they share and “Boy, don’t these go well together?” The difference is that smoke and liquor flavor combinations are endless, from not only chocolate and peanuts, but vanilla, maple, toffee, a wealth of herbs and spices, leather, fruits, and the possibilities go on.

But when faced with myriad choices it can be difficult to know where to begin. The good news is a few simple guidelines will get you on your way. The great news is you’ll never work your way through all the options as you try to demonstrate again and again what has been known for centuries: the drink bone’s connected to the smoke bone.

The cardinal rule is that you should start by matching the body of the smoke with the body of the drink. Full-bodied cigars tend to pair best with full-bodied whiskies. Milder cigars often perform well with lighter whiskies. Any imbalance in one element can drown out the other or, worse, a milder spirit might find off-notes in a fuller cigar. Yet it’s a rule that will avoid mistakes more than discover great unions. Despite the logic, many is the time when sublime marriages come of opposites attracting.

That’s because one component in a pairing is a complement to flavors in the other. Bitter and sour notes need sweet and savory flavors to temper them. In turn, the latter gain interest from the former. When all taste constituents start to ping and feed off one another you get pure excellence. One of my favorite experiences is what I call the “Snickers bar effect.” Nuts and chocolate and salt and caramel come together and taste like a grown-up candy bar.

Certain spirits excel at cigar pairing, and, hint: they’re all brown. All types of fine brandies work. (The cliché of gentlemen enjoying a cognac and a smoke after a dinner party holds true.) Whiskies from across the globe are excellent choices; scotch is a classic. Rum can be heavenly, but has pitfalls. If you are into wine, choose something with plenty of structure (maybe even something fortified, like port or vermouth). With clear choices like gin and vodka, it’s not so much that they react badly, but neither should you expect magic in the match.

Bourbon is the universal donor to a cigar pairing. If you’re offered a drink while smoking and you have no idea of the nature of the cigar or the labels behind the bar, make bourbon your first call. The whiskey’s typical flavor notes of maple syrup, honey, caramel, nuts, charred wood, and fruit practically guarantee finding complementary flavors in a cigar. Bourbon brings needed sweetness to the leather and dark toast of stronger cigars, while even milder cigars can generally stand up to all but the strongest of bourbons because of their lush barrel notes. Tennessee whiskeys, having been charcoal filtered for smoothness, tend to do better with lighter smokes. Similarly, the spiciness of straight ryes may clash with peppery tobaccos, but they play well with toasty, nutty cigars.

Try: Maker’s Mark with a full-bodied Nicaraguan cigar.
Top picks: Padrón 1964 Anniversary Series Exclusivo ($12), Vegas Cubanas Generoso ($7), Padrón 2000 Maduro ($6)
Why it works: The toast, nuts, caramel, and pepper notes in the cigars are made for this bourbon, which provides complementary sweetness on a canvas of wheat.

Since Canadian whisky is stereotypically smooth, it predictably makes a friend with mild cigars that won’t overrun its subtle charms. However, this pairing is often an opportunity for breaking the rules. Cigars with leather notes (which usually fall into the full-bodied niche) tend to see those characteristics drawn out by Canadian whisky’s vanillin. Furthermore, spicier Canadians with high rye content will benefit from nutty notes in a cigar.

Try: J.P. Wiser’s rye with cigars with light-colored wrappers that nevertheless pack lots of flavor.
Top picks: My Father Connecticut Robusto ($8), Avo XO Preludio ($10), Davidoff Winston Churchill Churchill ($20)
Why it works: These three cigars, all mild to medium-bodied with Connecticut-seed wrappers, bring subtle flavors like toast, mint, and spice, while allowing the whisky’s spice to pop without overrunning it.

The most widely available examples in this category are—similar to Canadians—notably smooth blended whiskeys. Again, that would suggest pairings with mild to medium cigars. If the tobacco has a fruity side that the whiskey can do a jig with, that’s a plus. However, they needn’t always be treated with kid gloves. Remember how well Irish whiskey goes with coffee and you might want to consider a smoke with a java note (a flavor typically associated with full-bodied cigars).

Armagnac and cognac are traditional cigar matches, born of the Brits’ fondness for the distilled wine of France. Good fortune may have brought brandy and cigars together, but natural chemistry has helped them stand the test of time. Floral and fruity brandies of subtlety and nuance demand milder cigars. Those with Connecticut wrappers are often good choices. Older cognacs—especially XOs that have developed nutty rancio notes and lots of complexity—are best for stronger cigars with leather and cocoa. Armagnacs, distilled but once, are laudable for their versatility and pair well to a wider range of cigars. But don’t forget that American brandies are coming into their own (see Summer 2018 issue) and often have the bolder barrel flavors needed to counterbalance cigars with big bodies.

The concept of terroir points to an obvious synergy between rum and cigars. Whether in Cuba or Dominican Republic, cigar tobacco and the sugar cane used for rum seem to coexist from birth. Furthermore, the makers are often devotees of both products. Then there’s the sweet profile of rum—always a boon to a cigar pairing. Leave the white rum for Daiquiris and Mojitos, and follow the brown-spirits theory to an expertly matured rum. These tropical treats cozy up with a cigar in much the same way as bourbon: lots of cane and barrel notes find a way to seduce similar charisma in a cigar.