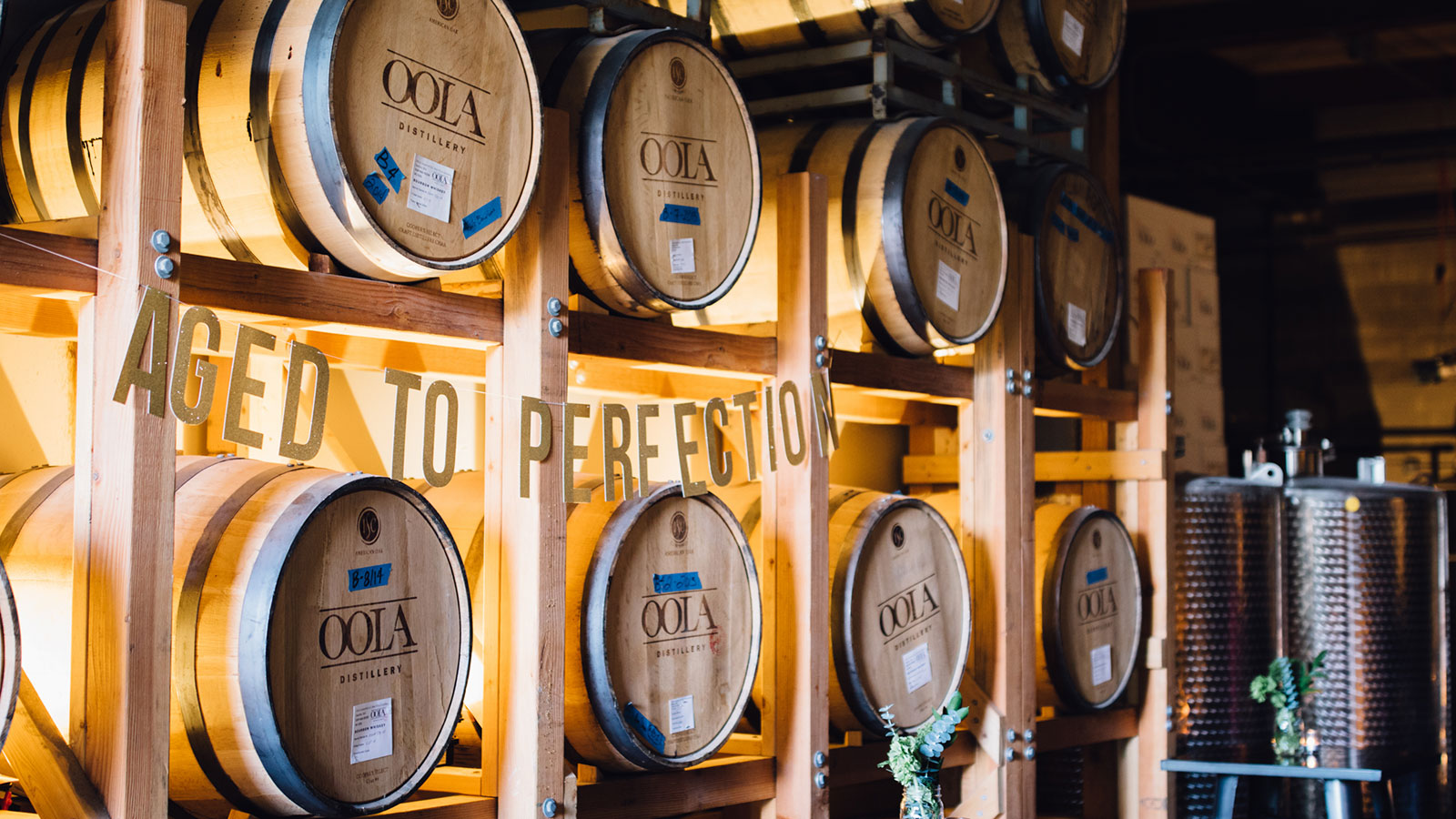 OOLA distillery is a five-minute walk from the acclaimed whiskey bar Canon.

Seattle’s association with drinks has tended toward the city’s world-class coffee and the monster-hoppy IPAs. But Seattle also has an active local craft distilling scene, home to almost 20 distilleries, with many making whiskey.

Single malt whiskey has been the object of much local obsession. In the last several years, scientists from Washington State University and Oregon State University have confirmed what distillers and farmers have long suspected: that the maritime climate in this part of the world mirrors that of Scotland, where some of the best single malts are made.

But single malt isn’t the only whiskey style Seattle distillers are creating. Bourbon, rye, and other whiskeys are also flowing off the stills, often with an emphasis on using local grains and reflecting the terroir of the area.

The local whiskeys are garnering praise from near and far, and Seattle is becoming known as a distilling powerhouse. The Washington Distillers Guild is launching an interactive trail map this summer, where you can plot your own whiskey route (or one focusing on other sprits) around the city and even across the state.

Whether you want to map your route or freewheel around Seattle, get to know the craft distillers making whiskey—single malt and more—in the Emerald City.

From its founding in 2010, Westland Distillery’s aim was to dominate the American single malt market, which seemed crazy at the time, when few craft distillers were making single malt whiskey. But no one is scoffing at master distiller Matt Hofmann’s bravado now that French spirits conglomerate Rémy Cointreau has bought Westland.

Its American Oak whiskey, which uses five types of malted barley, was the first widely acclaimed spirit released in Seattle and helped put the state’s distillery scene on the map. Westland’s portfolio also includes peated and sherry cask expressions, but the most sought-after is its limited-release Garryana whiskey, named after the native oak varietal used in its barrels.

Westland hosts the city’s most elaborate tasting and tour, a good primer of the Pacific Northwest’s single malt scene. You can also order cocktails at its modish industrial tasting room. 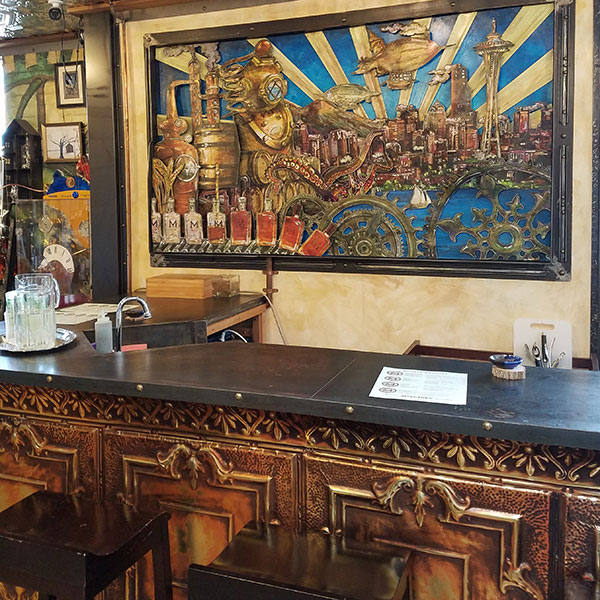 The tasting room at Freemont Mischief is steampunk-themed.

On a lark, Fremont Mischief’s founder Mike Sherlock plopped some rye barrels on the bows of two fishing vessels headed north, one for the rough waters of the West Bering Sea and the other to the calmer Northern Bering Sea, to see what briny notes the casks would pick up. These two expressions are now available as “Storm Tossed” limited releases. Fremont Mischief’s whiskey portfolio focuses solely on rye, including its popular 7 year old namesake straight rye and Skagit Gold, a double-distilled straight rye.

Originally opened in 2010, the distillery is expanding, with a rooftop terrace as well as a third still that will allow Sherlock to triple production to 20,000 gallons of spirits by the end of 2018. In addition to rye, Fremont Mischief makes vodka, gin, and apple brandy.

Tours are not offered during the remodel, but the distillery’s steampunk-themed tasting room is open from Wednesday-Friday noon-6 p.m., Saturday 11 a.m.-6 p.m., and Sunday 11 a.m.-5 p.m.

Located on the south side of the artsy, hip Capitol Hill neighborhood, OOLA is a five-minute stroll from the acclaimed bar Canon, which boasts one of the world’s largest spirits selections, including more than 3,000 whiskies. The distillery is named after a German Shepherd that belonged to founder Kirby Kallas-Lewis.

In addition to whiskey, Oola makes a variety of vodkas and gins. The tasting room is open Tuesday-Saturday 11 a.m.-7 p.m. In addition to its distillery headquarters, as of February 2020 Oola operates a second tasting room in Seattle’s Georgetown neighborhood. 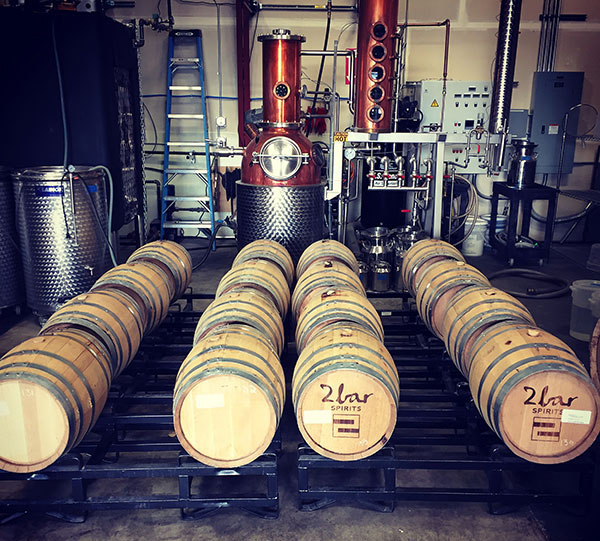 A look inside the 2bar distillery, which has recently acquired more warehouse space to start laying down full-size barrels.

As Nathan Kaiser tells it, his family has been in the moonshine business for generations—he was just the first one to make it legally when he opened 2bar, named for his family’s Texas ranch, in 2012. Head distiller Maddie Kelly oversees 2bar’s portfolio which includes moonshine and bourbon, made with corn, wheat, and four different types of malted barley. She also handles 2bar’s small-batch releases, which in the past have included a heavily-malted wheat whiskey and a 2 year old rye.

While the distillery started off using 15-gallon and 30-gallon barrels, it has acquired more warehouse space to start laying down full-size barrels. In addition, Kaiser expects to release whiskeys aged 4 years and greater soon.

Tasting and tours are available by appointment.

Co-owners and distillers Will Maschmeier, Craig Phalen, and Warren Strasen came from diverse backgrounds to open this distillery in 2013. Along with gins, vodkas, and rums, they make bourbon; single malt using brewers’ grains and imported peated barley; a hopped whiskey with Amarillo, Horizon, and Chinook hops that impart the floral, piney punch of a triple IPA; and a rye that’s loosely based on a whiskey recipe from George Washington, featuring a corn-heavy mashbill and chocolate brewers’ malt.

3 Howls sits near Seattle’s sports stadiums, which locals know means heavy traffic congestion when the Seahawks, Mariners, or Sounders are playing. It’s a quieter stretch on other days, however, and the bonus is that 3 Howls sits a half-mile from Hooverville Bar, a popular after-shift whiskey hangout for bartenders. 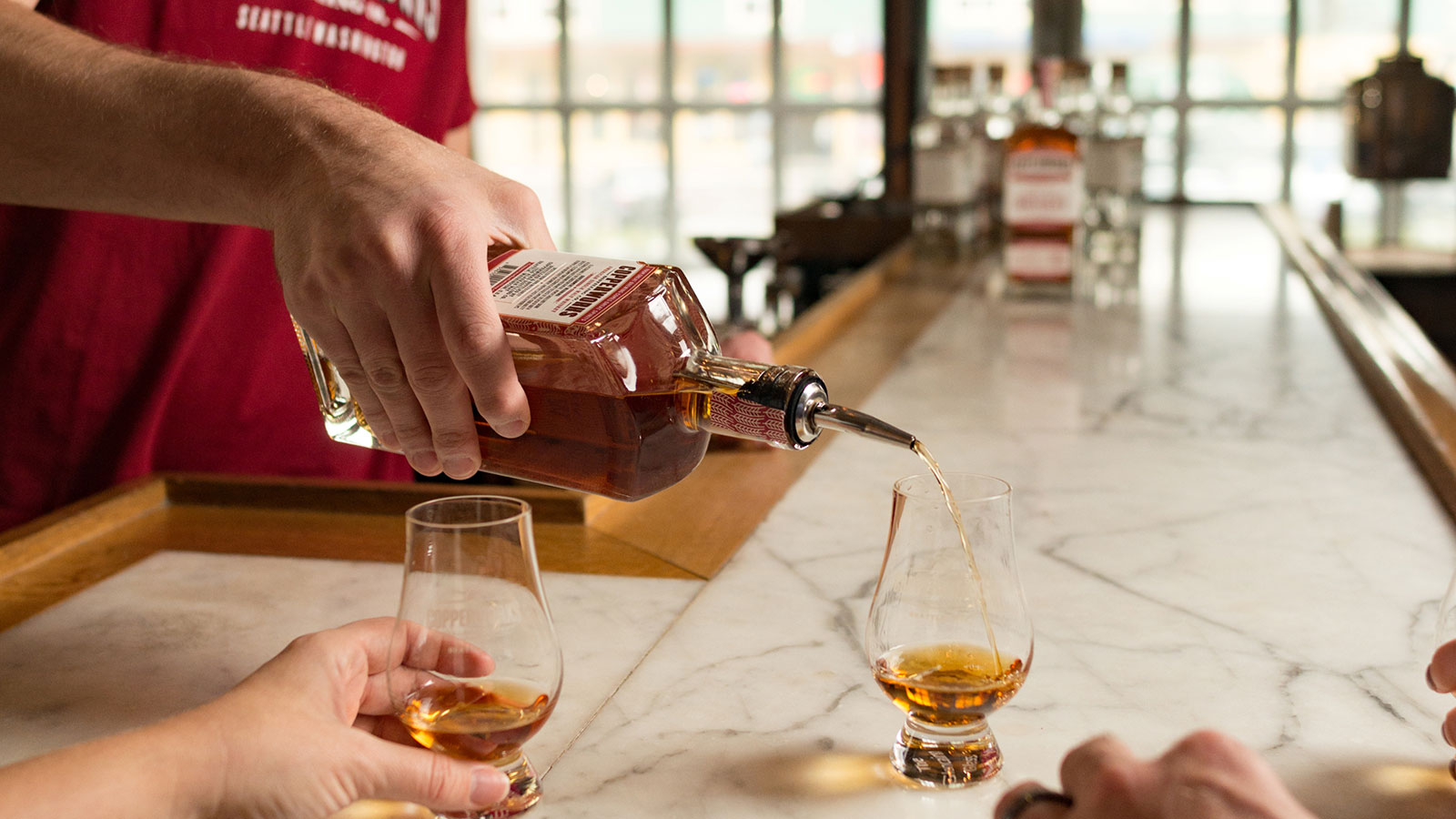 Formerly a brewer for Seattle’s Pike Place, Redhook, Fish, and Pyramid breweries, Jason Parker is one of several hop-heads who made the change to distilling. After convincing homebrewer Micah Nutt to join him, the business partners flew to Scotland to the acclaimed Forsyths to get four stills custom-made for the waterfront distillery, which opened in 2013.

Those shiny, Instagram-friendly copper stills are a big hit with tourists who walk three blocks over from Pike Place Market. The main draw, though, is Copperworks’ American single malt, a blend of two mashbills (a five malt and a pale malt recipe), aged for 39 months in full-size, new American oak barrels. The distillery also makes gin and vodka. A few times a year, Copperworks offers a blending workshop, where guests sample from different barrels and blend their own cask-strength whiskey to take home ($150).

Jeff Steichen—a fixture in the local music scene who ran several clubs—entered the booze business in 2009, contract-distilling gin and vodka at Portland, Oregon’s House Spirits and later opening Batch 206 in Seattle’s Interbay neighborhood. While distilling bourbon and waiting for it to age, Batch 206 offered sourced whiskey under the “Barrel Raider” label. But Batch 206’s flagship Old Log Cabin bourbon (named for a historic brand) is now of age, made with 51% corn and 49% malted barley from nearby farms. Steichen has held back some older bourbons (aged 3-5 years), which can be sampled straight out of the barrel on Saturday tours.

Batch 206 also runs a cocktail bar that showcases its whiskey, gin, and vodka, as well as other locally made spirits. Bonus: the bar is adjacent to one of the best Washington state breweries, cult favorite Holy Mountain Brewing Company.

Steven Stone, who has made some of the best liqueurs in Seattle since opening Sound Spirits in 2010, is now in the single malt business. Sound Spirits’ Madame Damnable whiskey is aged for three years in new charred, 30-gallon barrels. Stone may soon add rye and bourbon to the portfolio as well. He also makes gin, vodka, and aquavit. No visitor, though, leaves here without sampling his liqueurs, which include cacao, ginger, and mint. 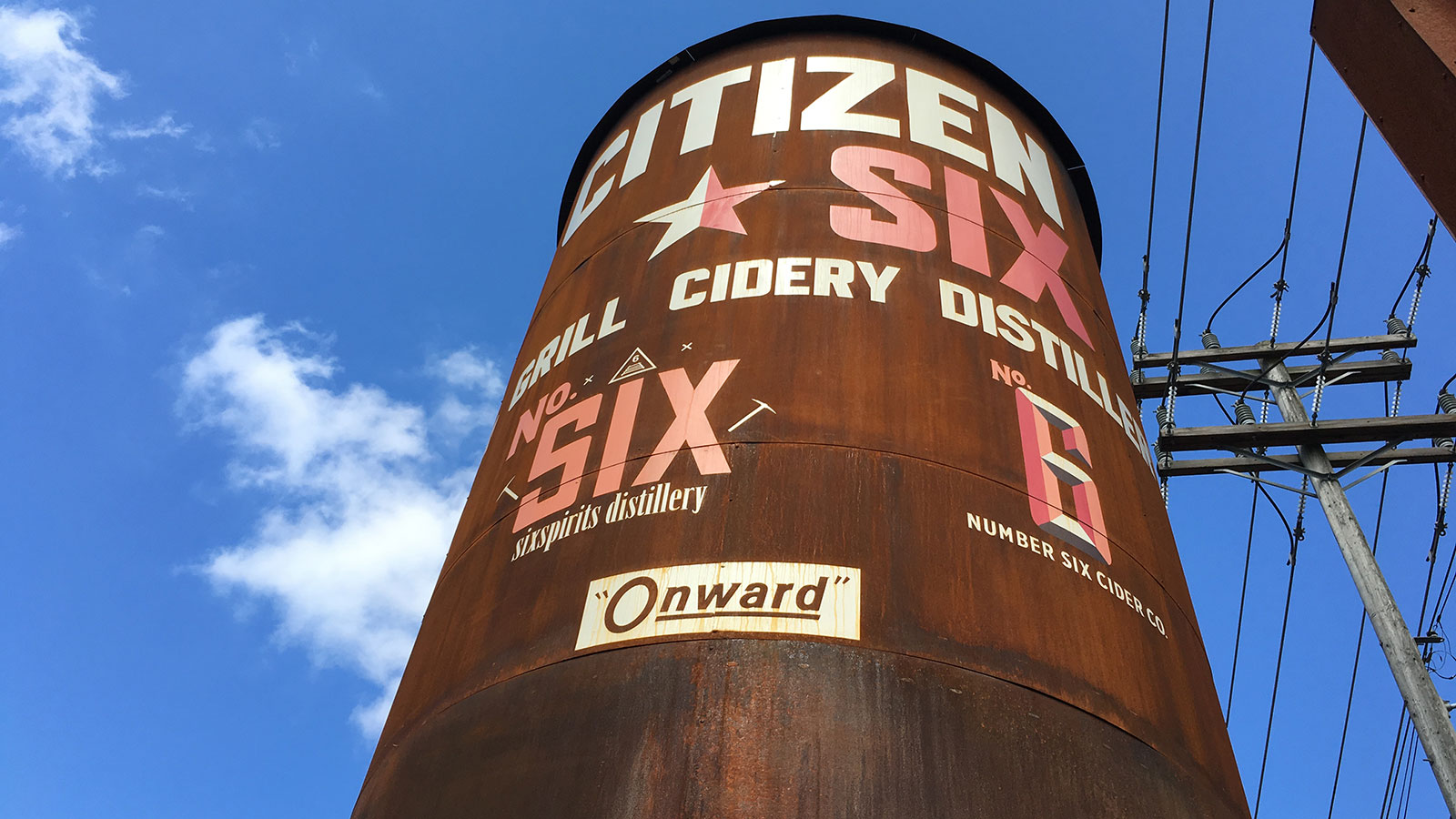 Six Stills will be releasing a bourbon and other whiskies this summer.

Known for its apple brandies and gins, Six Spirits is expanding into whiskies. Distillery owner Clint Wallace, an architect by trade, is releasing some small batches in summer 2018: a bourbon made with corn, malted rye and chocolate malted rye, and 2-row malted barley and aged in 53-gallon barrels, and an experimental single malt made with two-row and peated barley, aged for 18 months in 5- and 10-gallon new American oak barrels. Six Spirits’ single malt will eventually be aged in full-size barrels as the distillery expands its distribution over the next couple of years. In the meantime, the current releases will only be available at the tasting room and at the restaurant Citizen Six, located next to the distillery.

Tasting and tours by appointments only.

Washington state has a slew of other incredible distilleries, including two noteworthy producers located just outside Seattle.

Whisky Advocate’s 2016 Craft Whiskey of the Year, Yama American Single Grain Barley, is made on idyllic Bainbridge Island, a 30-minute ferry ride from Seattle. This rare whiskey was made from barley grown in nearby Skagit Valley and aged in mizunara oak imported from Hokkaido, Japan. Proceeds from its sale benefited the island’s historic Japanese-American community of Yama.

A USDA certified-organic operation, Bainbridge Distillers is best-known for its wheat spirits, including its flagship Battle Point whiskey. The distillery also makes vodka, gin, and limited-release whiskeys, including periodic batches of Yama, an Islay cask-finished wheat whiskey, and a 4 year old bourbon.

Owner and distiller Keith Barnes put Bainbridge on the whiskey map. In addition to running the distillery, he oversees one of the top whiskey events in the Northwest, Whiskies for Wildlife, which benefits the Puget Sound Restoration Fund and draws whisky lovers from around the country to the island to sample hundreds of top-shelf and unicorn bottles, from 40 year old Laphroaig to 30 year old Lagavulin distilled in 1976.

In 2017, the French spirits company Moët Hennessy bought Woodinville Whiskey Company, a Washington distillery founded by high school pals Orlin Sorensen and Brett Carlile. But even before that blockbuster deal, this Eastside distillery was already wildly popular, with fans lining up for hours or even days to snag a bottle of its bourbon or rye.

When the distillery opened in 2010, Sorenson and Carlile hired former Maker’s Mark master distiller Dave Pickerell as a consultant. They had the chutzpah to plop their distillery in the middle of a wine-tourist destination, about 40 minutes east of Seattle.

Visitors have embraced the grape-and-grain tour. Woodinville offers 5 year old bourbon and rye and a straight American whiskey, as well as the limited-edition Port Finished straight bourbon, a 5 year old whiskey that’s finished in tawny port barrels for a half-year and only available at the distillery.

Since the acquisition by Moët Hennessy, Sorensen and Carlile are focusing on the bigger picture: increasing production to expand to California and a handful of other states over the next three years.