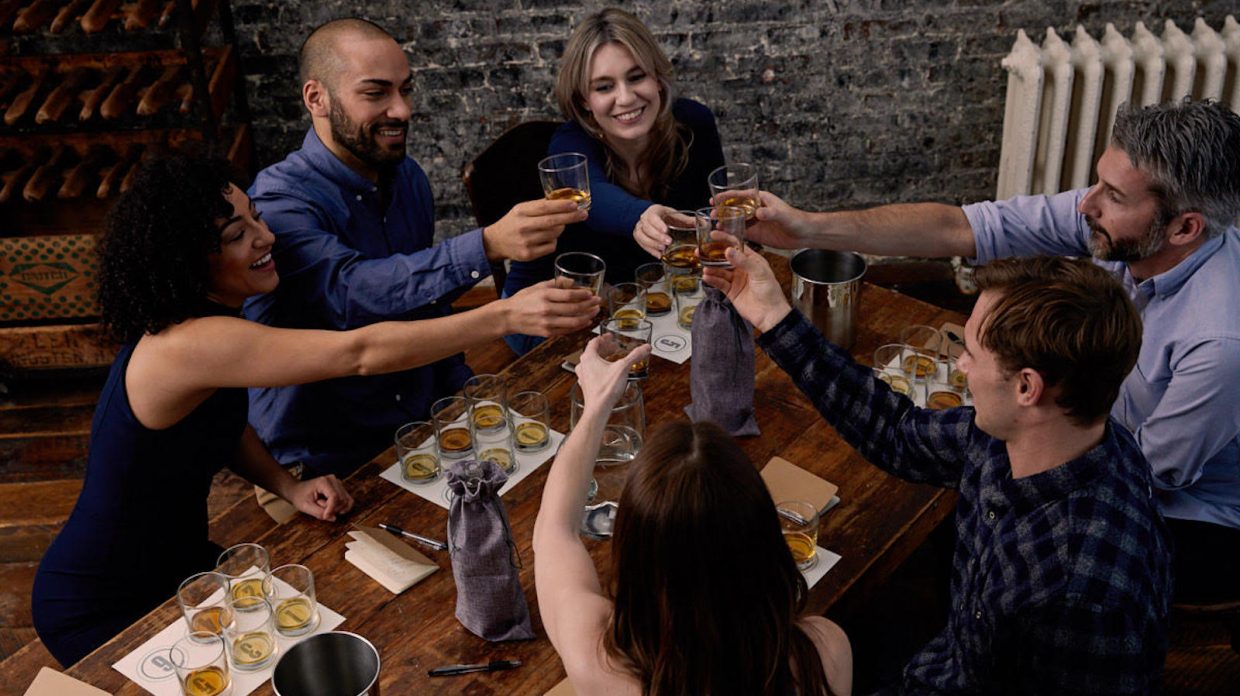 One of the many joys of being part of a whisky club is tasting in the company of others who also enjoy the water of life, but acquiring whiskies can pose a challenge. Today’s whisky world is highly competitive for buyers, and your quest for new and unusual whiskies can often feel like one space forward, two spaces back. However, with a dedicated team and a solid strategy, your whisky club will be well-rewarded. Be prepared to visit distilleries, take road trips to liquor stores, pore over auction catalogs, and scour Travel Retail shops. In the game of whisky shopping, you have to play to win.

Doug Spencer started the Milwaukee, Wisconsin-based WhiskyHead Tasting Club in 2013 to create an environment where like-minded people could learn more about whisky. “I was still new to whisky back then, but had enough knowledge to know that a lot of people had either never been exposed to whisky or were turned off by previous experiences with cheap whisky,” Spencer says. “The club also enabled us to formally pool our money to buy bottles that were out of our price range.” Spencer held the inaugural meeting at his home, followed by get-togethers at different members’ houses, until the club grew so large it had to move its gatherings to a local establishment. It’s Spencer’s job to source bottles for tastings, though he delegates the task to other club members if their knowledge and access to particular bottlings puts them in a better position, such as the time one member picked up nine bottles on a trip to Japan just before Japanese whisky prices started to soar.

When arranging tastings, Spencer hunts for sales, new releases, whiskies from distilleries the group has yet to try, or bottles that might fit in with the night’s theme. “Budget is always a factor,” he says. “Even though all our money goes into buying bottles, it seems there are too many bottles to try and too little money to buy them with!” He tries to spread the love between different regions and whisky styles; they recently hosted a bourbon battle to compare the quality of low-, medium-, and high-priced bourbons. Members are encouraged to search for and suggest bottles whenever the opportunity arises. “Just recently, I received a text message from a member who came across Laphroaig 25 year old for $250,” Spencer says. “That’s a deal the club just couldn’t pass up!”

When gathering whiskies for a tasting, it can be effective and fun to create a shopping mission for the entire club.

The social aspect is also important. “Not only do we get to taste great whisky, but also many of us have grown friendships and networked on a business level with each other,” says Spencer. Currently, membership is capped at 25 people to ensure an adequate pour for everyone. When the club was smaller and rarely finished bottles, Spencer stored open bottles and took them to future meetings. “Now that we’re larger, bottles are typically empty or almost empty when the meeting ends,” he confesses, noting that he raffles off almost-empty bottles to members.

By making distilleries aware of their club, WhiskyHead has occasionally benefited from free whisky as well. “We have been fortunate to be visited by multiple distilleries who have donated really good whisky to us,” Spencer says. But these evenings are about more than just VIP access to bottles they might not normally buy. The ability to try the finished whisky alongside new-make spirit, touch the grains that are used to make the whisky, and gain firsthand knowledge from the distiller are the real dividends. 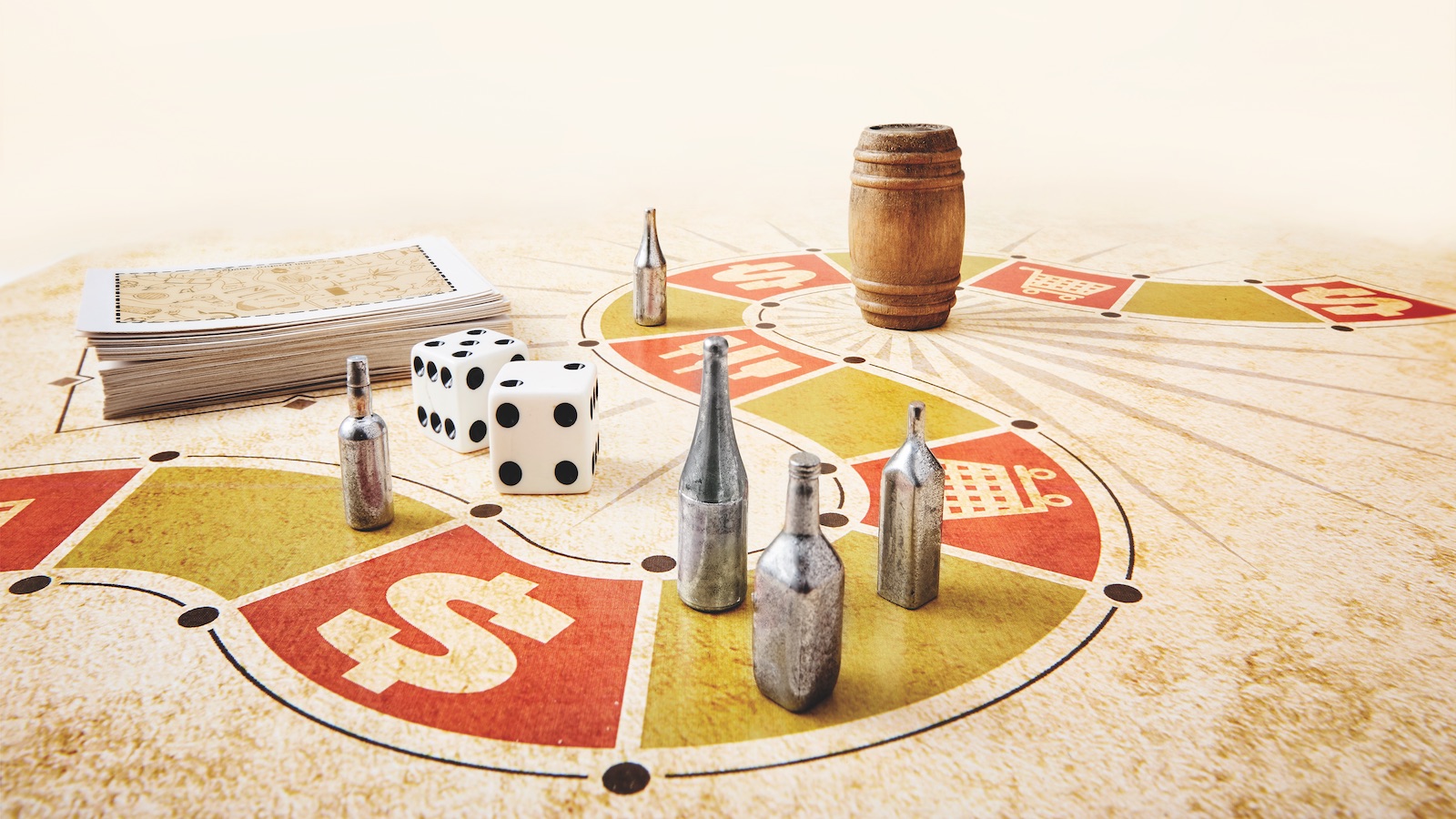 Acquiring great whisky for your group tastings is about both strategy and luck. (Photo by Jeff Harris)

Get in the Game

When Kevin Clover met his new next-door neighbor in 2013, they discovered they shared an interest in whisky. Clover asked him if he wanted to join a whisky club and he agreed, and asked how many members they had. “Just you and me,” Clover admitted. Since then, the Delmarva Whiskey Club has grown to more than 80 members and meets regularly in the Ocean City, Maryland area. Clover, the club’s president, uses the club’s popularity and scale to acquire quality whiskies for core events, centered around traditional whisky-drinking holidays like Burns Night, St. Patrick’s Day, and the Kentucky Derby. A portion of the one-time $200 membership fee goes toward buying an exceptional rarity for New Year’s Day. In 2019, they popped the cork on the latest Bruichladdich Black Art bottling.

More casual events might rely on contributions directly from members, like the annual July whisky picnic. “This is a BYOHEB event,” Clover says, meaning, bring your own half-empty bottle. Before hot dogs and hamburgers, members share whiskies—and the stories behind where the other half of the bottle went.

Some groups, such as Colorado Bourbon & Rye Collectors (CBRC) in Denver, have rapidly grown beyond what a single bottle can serve. Since it started in 2017, membership has surged from 50 to 660 members.

Club president Ben Rosen notes that CBRC’s size helps when it comes to acquiring certain whiskies. It “allows you to go out and purchase rare and highly allocated bottles for tastings,” Rosen says. “There are always members who want to sample them that otherwise couldn’t.” In today’s competitive environment, these bottles are mostly picked up at secondary market value at auctions or private sales. “This is my preferred way to taste highly allocated bottles,” Rosen adds. “It takes the pressure off those people trying to gather bottles for the tastings. The cost per member increases, but if we’re in line with current bar and restaurant costs, then I’m comfortable.”

CBRC’s scale also benefits members looking to expand their personal collections. “When you are out there on your own, you can only go as far as your current knowledge takes you,” Rosen says. When stores release allocated bottles or store picks, CBRC members usually get that information ahead of the general public. Additionally, members get access to whiskies that were not previously distributed in Colorado and information on where to get them. “If you work hard enough, you can probably obtain all this information on your own, but we all have lives outside of this hobby, so you can benefit greatly from CBRC by being active in the group,” Rosen says.

At the same time, having so many members can present shopping challenges. There’s simply not enough rare bottles to go around. To keep things fair, CBRC tastings are limited to 30 to 40 members, chosen at random from those who sign up.

How to Plan the Perfect Whisky Tasting Flight

In some cases, the club’s size means it can buy—and taste—a wider variety of whiskies.  “Stores go out and purchase single barrels of bourbon that they wouldn’t have done otherwise if the group didn’t exist,” explains Rosen. “It’s a win-win for both the store and our members.” Rosen initially stored the club’s bottles under lock and key at his office, but as the number of bottles increased, he needed to move the collection to a wine storage facility. In the rare event an expensive whisky goes unfinished, he applies argon gas before corking the bottle to keep the liquid fresh.

When gathering whiskies for a tasting, it can be effective and fun to create a shopping mission for the entire club. In early 2019, CBRC assembled a lineup of special distillery-only releases, single barrel selections, and finishes. “I had friends looking in Nashville, Chicago, and Atlanta for anything they could get their hands on,” Rosen says. “It was like a nationwide manhunt for these bottles.” In the end, CBRC managed to gather an impressive array for the evening, including their own single barrel selection. 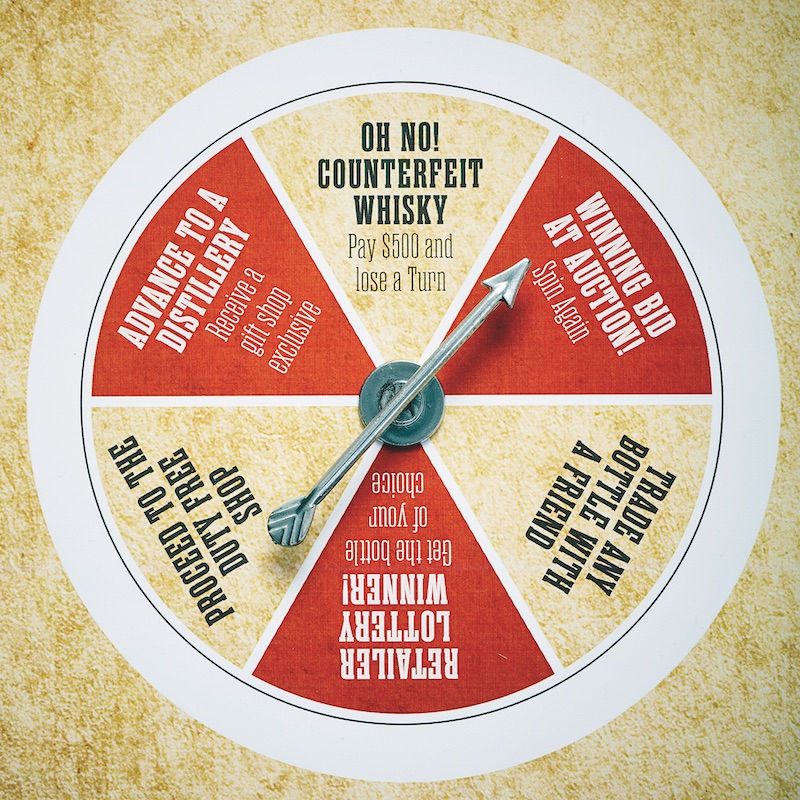 Take a chance and spin the arrow. (Photo by Jeff Harris)

Andy Smith and Scott Saikley were happily exploring whisky on their own through the bars and liquor stores of Pasadena, California. “We had plenty of empty bottles of scotch we had liked, but a lot more nearly full bottles of scotch we didn’t like,” admits Smith. “Splitting two ways helped, but playing malt roulette at the liquor store was getting to be a heavy price to satisfy our curiosity.” From an initial meeting of five people in 2006, they now run one of the largest whisky clubs in the country.

When it comes to shopping for themed tastings, the LA Scotch Club epitomizes the indefatigable spirit that lies at the heart of any successful whisky club. Take their “Plunder from Down Under” tasting, an audacious attempt to assemble 20 bottles from the southern hemisphere. They started with bottles available in U.S. stores, then progressed to online purchases from the UK and Australia, having the bottles shipped to Los Angeles. Some shops in Australia wouldn’t ship, but Smith refused to give up. “We just bought them anyway and asked the owner to hold them for us until something worked out,” he says. “Eventually, the owner’s daughter was flying to St. Louis and I met her on the sidewalk of LAX to pick up the package during her brief terminal transfer. It was my James Bond-iest whisky moment ever.”

7 Essential Items for a Whisky Tasting

Similarly, after several phone calls to a South Island, New Zealand-based whisky producer, Smith persuaded them to send a bottle to a club member who had relocated to Wellington. His perseverance paid off months later when the former member brought it to LA during a trip home. Another club member added a Balinese whisky to the list, picked up during a business trip to Indonesia. A whisky from South Africa, meanwhile, proved to be the most difficult to acquire. “The owner said it was only sold in Pretoria, it was sold out, and there was zero chance of us ever getting any—which of course meant we needed to have it,” Smith says. “Much to the owner’s surprise, I managed to locate one in Johannesburg and found out that one of our club members was due to meet a South African acquaintance at a convention in New York. I bought the bottle online and shipped it to this guy I didn’t know. We pulled it off!”

Around 3,000 people have joined the LA Scotch Club since it formed in 2006, with chapters thriving in San Diego, Orange County, San Francisco, Denver, and Atlanta. Given its size and longevity, Smith has quite a few tricks for storing and dispatching bottles. “I have a garage full of boxes that’s like that scene from Raiders of the Lost Ark,” he says. “California floor space costs a lot per square foot, so at first we began auctioning off leftovers at the end of the meetings. This did its job, but outbidding the person next to you makes for an awkward end of the evening.”

Now, LA Scotch Club decants sets of miniatures after tastings for members to buy, or if there’s enough stock, they duplicate the event at another club. “It’s another advantage of having access to a lot of people,” Smith says.

While a bit of luck doesn’t hurt, whisky shopping shouldn’t be a roll of the dice. With teamwork, perseverance, and guile, whisky clubs go to extreme lengths to acquire the bottles they want. And when you’re sitting in the winner’s circle, that accomplishment can be as rewarding as tasting the whisky.