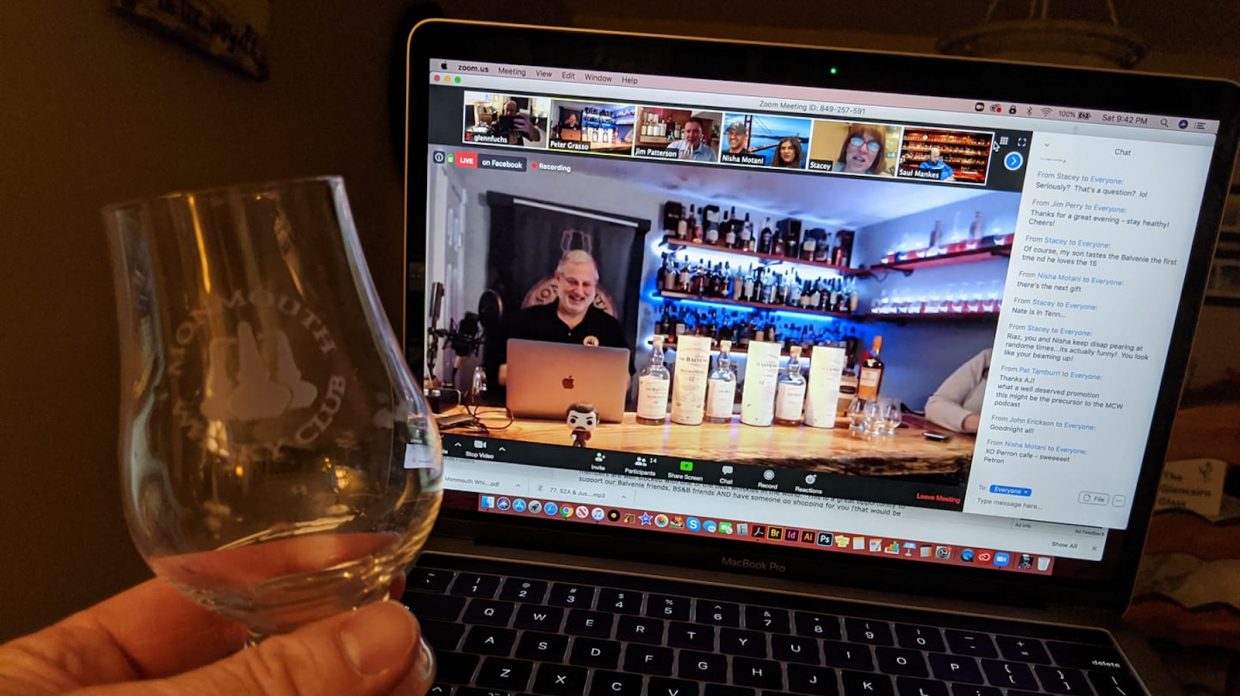 Monmouth Whisky Club co-founder Peter Grasso (pictured on screen, seated behind laptop) was joined by more than 100 members of the New Jersey-based group on March 28, via Zoom and Facebook, for the club's first virtual meeting, with Balvenie brand ambassador Jim Patterson. (Photo by Glenn Fuchs)

COVID-19 has put a stop to most in-person social gatherings for now, but whisky clubs like Drammers, Women Who Whiskey, and Black Bourbon Society are still finding ways to come together around their favorite spirit. Other groups aren’t slowing down either—and some are even increasing the frequency of their tastings.

“We are going strong,” says Bikram Singh of Norfolk Whisky Group in Massachusetts. On St. Patrick’s Day, the club held an “open-ended” Irish whiskey tasting on Google Hangouts, in which “anybody who wanted to could join in, grab their whiskey, and enjoy,” Singh says. “We had single malts, pot stills, even Bushmills Irish Honey. It was brilliant.” And although they missed the “back-and-forth banter” of their normal group tastings, this one felt more focused, because “whenever you were talking, you were talking to nine other people. In a certain way, it was more united—everybody was listening to what everybody else was saying.”

The following week, on March 23, around 12 Norfolk Whisky Group members enjoyed a Bruichladdich tasting via Zoom with brand ambassador Jason Cousins. That same day, the club held its first-ever remote blind tasting of more than half a dozen whiskies, which group members had prepared in small bottles and distributed to each other beforehand. “We had a video conference where we all poured each sample, tasted it, ranked it, and talked about it,” before the big reveal, Singh explains. “It was actually a lot of fun.” The group has since ramped up its informal tastings to a daily basis and has more formal events on deck. Through his liquor store, Norfolk Wine & Spirits, Singh is able to offer special pricing on bottles featured in upcoming tastings to encourage more participants, not just current club members, to join in.

Meanwhile, New Jersey-based Monmouth Whisky Club’s first virtual meeting on March 28, with Balvenie brand ambassador Jim Patterson, went “extraordinarily well,” co-founder Peter Grasso says. It attracted 28 active participants via Zoom, and another 75 joined in through the club’s private Facebook group. “We ran it much like our regular events, with a guest brand ambassador, three Balvenie samples that were distributed in advance, and social time” toward the end, Grasso explains. “This is really designed to give members a relief valve to let off some steam. As with everyone, they’re mostly stuck in their houses, many of them with kids. This is adult time with some fine whisky to loosen their tongues.” So far, “we’ve had a lot of very good feedback from our members,” Grasso adds. “We also had several other brand ambassadors [join us] online, and they not only enjoyed themselves, but are looking forward to hosting events.”

In fact, Grasso says he’s lined up tasting events with the likes of Maker’s Mark, Macallan, FEW, and Redbreast for at least the next three weeks, all scheduled for Saturdays at 8 p.m. Eastern. “We’re calling the series ‘Lift Our Spirits,’” he says.

Grasso didn’t necessarily expect virtual meetups to succeed, but sees promise in them going forward. “Using technology like this had not been in our plans previously, but we are now looking at how we can incorporate this technique into future offerings,” he says. “Specifically, we may offer streaming to our Facebook group,” so that members who are unable to attend a meeting in person can still participate and ask questions. “I’m most excited about being able to use Zoom for meetings with distilleries that don’t have brand ambassadors here in the states,” he adds. 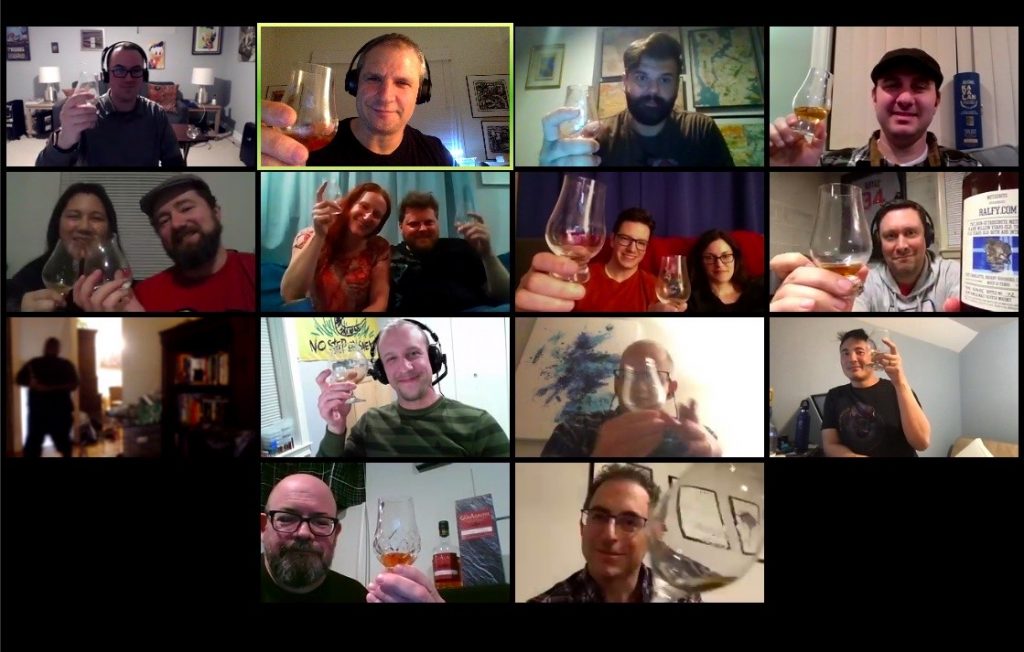 Washington, D.C.’s Islay Scotch Society also held a virtual tasting on March 28, says Adam Safir, one of the club’s main organizers. The group normally holds bottle shares and brand ambassador events in the homes of its members, but co-founder Taimur Alizai—looking to keep members’ palates sharp amid social distancing restrictions—turned to Zoom to organize the event. Standout bottles included Bunnahabhain 18 year old; Lagavulin 21 year old; a Glenallachie single-cask bottling contributed by Winebow spirits specialist Dan Searing; and whiskies from Bruichladdich. Despite some initial reservations about the virtual format, Safir says 25 club members had a blast sharing tasting notes and discussing delicious whiskies. “A big component of our events is the camaraderie,” Safir adds. “Everybody really enjoys each other’s company—getting together, laughing, talking, and comparing notes on the whiskies we try. So I think that fed into the hesitation a bit—how would this tool people generally use for work translate to this social sphere? But once we got on the call, it became apparent right away that it was a great opportunity to connect in a different way,” including with several members who’ve moved away from the area in recent years.

Typically the Islay Scotch Society’s tastings happen once every two or three months, but the group had another tasting on April 4 with BenRiach, GlenDronach, and Glenglassaugh brand ambassador Greg King. “From a logistical standpoint, it’s much easier because travel time is cut out,” Safir explains. “My best guess is that this is going to complement our in-person tastings moving forward. We’ll still have regular tastings where we get together as a group in someone’s house. But in between, if somebody gets a phenomenal bottle that they’ve been on the hunt for, I could see us getting together on a Zoom call to chat about it, or sharing a couple drams together and making plans for an upcoming tasting.”

To be sure, the global COVID-19 pandemic has created plenty of challenges for Singh and other leaders of tight-knit, yet often far-flung, whisky groups. But at the same time it’s forced them to devise unconventional ways to appreciate whisky together using modern technology. “We’re just kind of learning the ropes, and people are really enjoying it,” Singh says. “There’s a learning curve to all of this. I think everybody’s inventing the beat on [the virtual tasting format]. Every day, there’s something new and different happening, and the creativity is just burgeoning. It can’t replace human interaction, but I think this is definitely going to be another way people enjoy whisky in the future.”

And in the meantime, it’s a way for whisky lovers everywhere to connect and keep calm. “This is a really challenging time for all of us,” Safir says. “We have friends and family who are either suffering or at risk from a health standpoint, or from an economic standpoint. This opportunity for us to get together [virtually] to share drams is a way for us to maintain some of the normalcy of life that we don’t experience otherwise.”