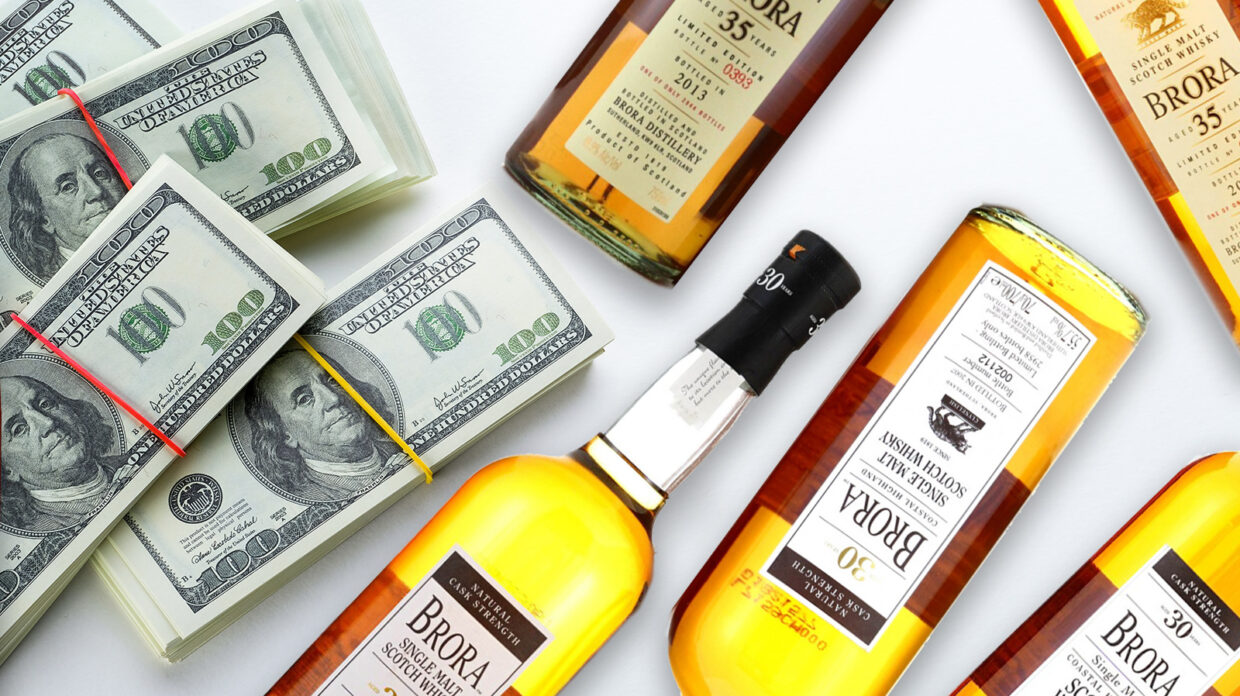 EDITOR’S NOTE: In our  “What’s It Worth?”  series, Whisky Advocate auction expert Jonny McCormick examines the current collectibility of a distillery or brand. With the long-silenced Brora Distillery now reopened, we pause to examine the auction values achieved over the last year for Brora bottlings in the Diageo Special Releases program and beyond.

When the discussion turns to Scotland’s silent distilleries, most collectors think of Brora and Port Ellen, which both closed in 1983. Following Diageo’s announcement that it would reopen both distilleries, Brora has now embarked on a new chapter with the filling of the first cask of new-make spirit in 38 years.

Brora was built in 1819 at a cost of £750—a sum that wouldn’t buy a single bottle on this list today. Between 2002 and 2017, Diageo released 16 annual bottlings of Brora from the distillery’s original stock as part of its Special Releases program, followed by Brora 40 year old 1978 200th anniversary in 2019. The values for most of these Brora releases have steadily grown in value over the years, especially for the earliest releases. For Brora sellers, Whisky Auctioneer and Scotch Whisky Auctions have delivered the highest prices over the past year, while Sotheby’s set the world record auction price for Brora in October 2019 with its sale of the Brora 40 year old. Earlier this year Whisky Auctioneer held an auction dedicated to the Golden Age of Brora. The annual Special Releases Brora bottlings reviewed by Whisky Advocate have scored between 91 and 95 points, and our list of 18 releases encompasses 45,653 bottles of Brora—meaning that even new collectors can have every expectation of building a complete set. With the prospect of young Brora single malt whisky to come, collectors will be watching closely to see if the Brora Triptych, released this month to celebrate the distillery’s reopening, will inspire even greater interest in Brora’s back catalog and push the record price even higher.

Some Advice Before Bidding

To protect against counterfeiting, Diageo has released Brora in individually numbered bottles with branded foil capsules fitted over security strips, but the rare Brora 40 year old has only a plastic shrink wrap so as not to obscure the bottle’s attractive copper neck and crystal stopper. Like the Rare Malts before them, the Diageo Special Releases bottles can be prone to evaporation if not stored correctly, so always check the fill levels carefully. Bottles in good condition will be filled to a low neck level, but if the whisky inside has dropped to mid-to-high shoulder, switch your bid to an alternative bottle. The 2002–2010 releases should all come with the original terracotta-colored tubes, but examine these externally for damage from scuffing, dents, and peeled-off price tags, and internally for rust from the lid and base.

18. Brora 25 year old (2008, 7th Annual Release), 56.3%
Hammer Price: $1,727 at Scotch Whisky Auctions
Sold: September 6, 2020
This has been the youngest Brora in the Diageo Special Releases, with flavors of citrus fruit, honey, and light smoke that are compatible with the final years of production in the early 1980s. With 3,000 bottles available, this was rated 91 points in our Buying Guide. 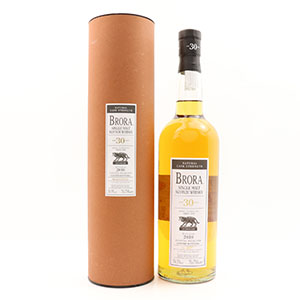 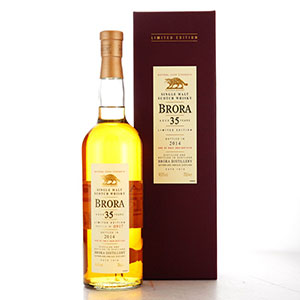 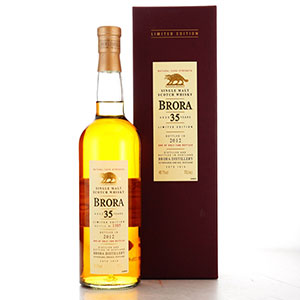 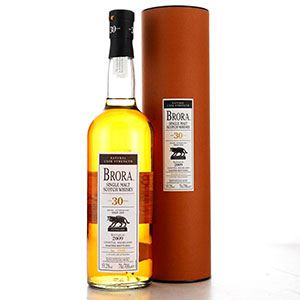 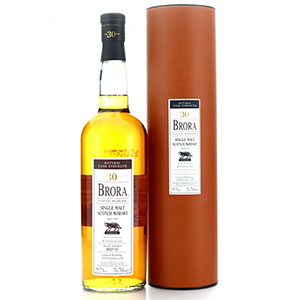 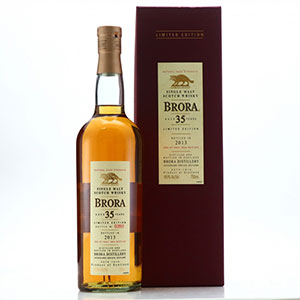 11. Brora 35 year old (2013, 12th Annual Release), 49.9%
Hammer Price: $2,058 at Whisky Auctioneer
Sold: April 5, 2021
This Brora scored 95 points and is the perfect one to sample to experience the spirit’s scented wax aromas and sweet smokiness on the palate. Vatted from refill American and European oak casks, this expression had 2,944 bottles released.

10. Brora 32 year old (2011, 10th Annual Release), 54.7%
Hammer Price: $2,071 at Scotch Whisky Auctions
Sold: November 1, 2020
In 2011 and 2012, with the age statement climbing, release volumes of Brora sank to their lowest levels yet. Reputed to be from 1978, this release totaled only 1,500 bottles. After nine years of simple cardboard tubes, this was the first annual release to appear in Brora’s more luxurious, ruby-colored presentation box. 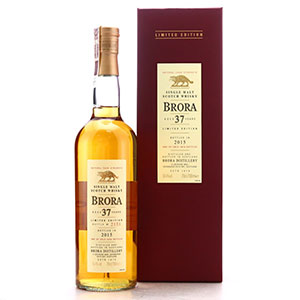 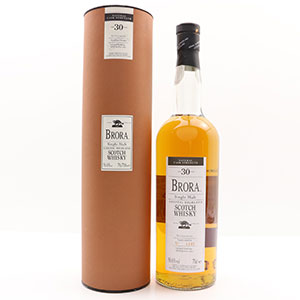 6. Brora 38 year old (2016, 15th Annual Release), 48.6%
Hammer Price: $2,419 at Scotch Whisky Auctions
Sold: December 7, 2020
When this one was released, the oldest Brora in the Special Releases series, the price was raised again due to Brora’s popularity on the secondary market. That resulted in slim margins for some flippers and losses for others. With characteristic earthiness, waxiness, and farmyard aromas, this release scored well with 93 points, and there were 2,984 bottles available. 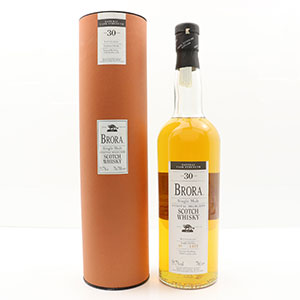 4. Brora 34 year old (2017, 16th Annual Release), 51.9%
Hammer Price: $2,490 at Scotch Whisky Auctions
Sold: March 7, 2021
These 3,000 bottles represent the last Brora bottling to be included in the Diageo Special Releases. Scoring 93 points, this was the most expensive Brora in the series, costing around ten times the price of the inaugural release in 2002. 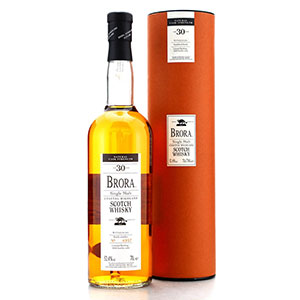 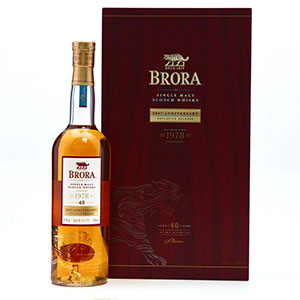 2. Brora 40 year old 200th Anniversary 1978, 49.2%
Hammer Price: $4,892 at Whisky Auctioneer
Sold: April 19, 2021
This release of 1,819 bottles by Diageo in 2019 marked 200 years since the Marquess of Stafford, later the Duke of Sutherland, founded the distillery. This was a vatting of a dozen casks from 1978 and is one to consider buying at auction now, as current prices offer considerable savings over the original retail price.

1. Brora 40 year old 1972, 59.1%
Hammer Price: $38,739 at Scotch Whisky Auctions
Sold: March 7, 2021
The Brora 40 year old was released in 2014 as a Travel Retail exclusive of 160 bottles. At the time, it was the oldest bottle of Brora available and Diageo’s most expensive whisky. Current auction values remain far in excess of the original price, though none have come close to challenging the Sotheby’s record.

Note to readers: Hammer prices set during the past 12 months were determined from the following selection of leading whisky auction houses: Scotch Whisky Auctions, Whisky Auctioneer, Whisky Hammer, Whisky.Auction, Just Whisky, Whisky Online Auctions, Grand Whisky Auction, Bonhams, and Sotheby’s. Prices were converted to U.S. dollars using xe.com exchange rates from the date of each auction. The highest hammer prices converted to U.S. dollars from the past 12 months are shown from the specified date, and future auction results may produce higher or lower hammer prices.