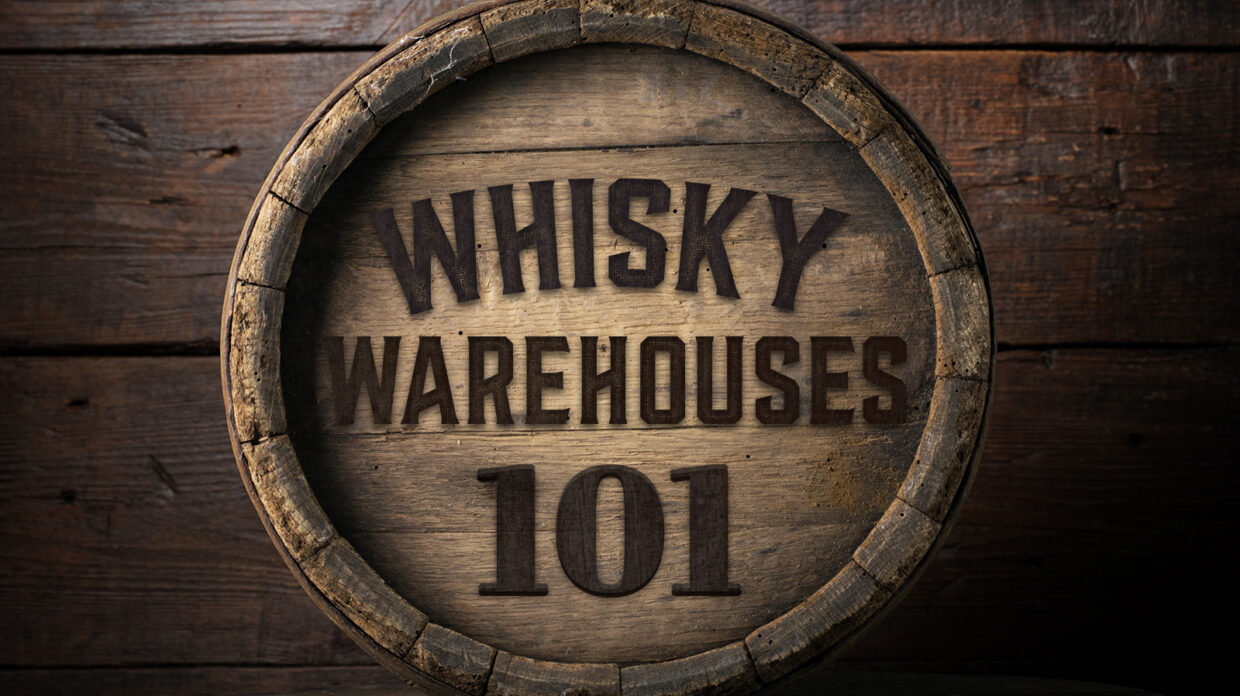 By some estimates, up to 70% of a whisky’s flavor comes from the barrel in which it’s aged, and hence, much attention is paid to the most minuscule details of the barrel, from the provenance of the wood to the depth of the char to what liquid it formerly held. But what’s often ignored is how the barrels are stored, a variable that can have profound effects on the whisky’s final flavor. There are three main types of barrel storage: rickhouses, palletized warehouses, and dunnage warehouses. Each has its benefits and drawbacks; the same whisky aged in different environments can turn out tasting quite different by the end. And that can actually be advantageous. 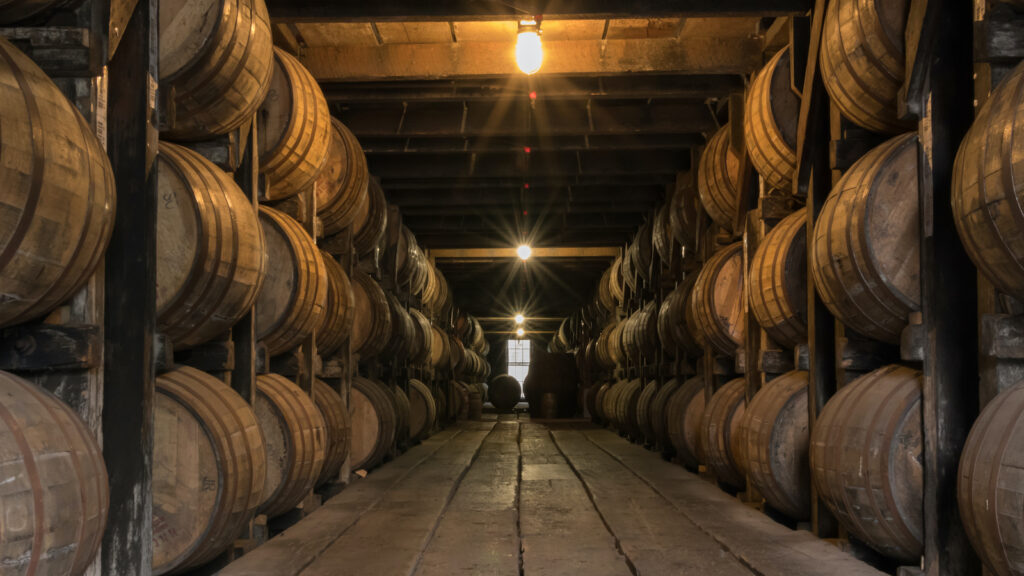 A rackhouse, or rickhouse, has barrels that are stored horizontally on racks, which allows enough room for the air to circulate around the sides and ends. (Photo by iStock/kellyvandellen)

Larger American whiskey distilleries generally store their barrels in racked warehouses (known as rickhouses or rackhouses) or palletized warehouses. Rickhouses have barrels stored horizontally on racks, also known as ricks, usually stacked three high, with plenty of room for air circulation around the sides and ends. The buildings are made from a variety of materials—tin, brick, wood, concrete—and, for the most part, lack artificial climate control, which means no air conditioning in the summer, no heating in the winter. The result, if you’re in Kentucky or similar climates, is extreme seasonal fluctuation in temperature, especially on higher floors, which causes the liquid in the barrels to expand when it’s hot and contract when it’s cold. Heaven Hill master distiller Conor O’Driscoll notes, “Those peaks and troughs of temperature are really going to drive the whiskey into the wood, and it’s going to increase the angels’ share, so you get a much faster, more powerful maturation.” Whiskey aged in lower racks on lower floors will mature through less extreme, more consistent temperatures; those conditions are superior for creating longer-aged whiskeys.

Rickhouses are labor-intensive; getting barrels into and out of the ricks requires a lot of brute strength on the part of trained workers. Enter palletized warehouses, in which barrels are placed on large wooden pallets—generally four to six barrels to a pallet—and stored vertically, one pallet on top of another. This method saves space, because the barrels are packed together more tightly, and labor, because multiple barrels can be moved at a time using a forklift, rather than individually.

But palletizing has its own drawbacks. The tightly stored barrels restrict airflow in the warehouse, and restricted airflow means a slower—and different—aging process. Storing barrels vertically instead of horizontally, with added pressure from the pallets stacked on top of each other, also increases the chance of leaks. Fred Noe, master distiller at Jim Beam, says that Beam still uses some palletized warehouses that were built decades ago. From an accounting viewpoint, he says, “they were thinking [these warehouses] were the second coming, because your warehouse crew goes down to one guy instead of having a crew of seven or eight who unload and roll the barrels, bring ‘em up, put ‘em in the rick—you got one guy. The labor is saved.” 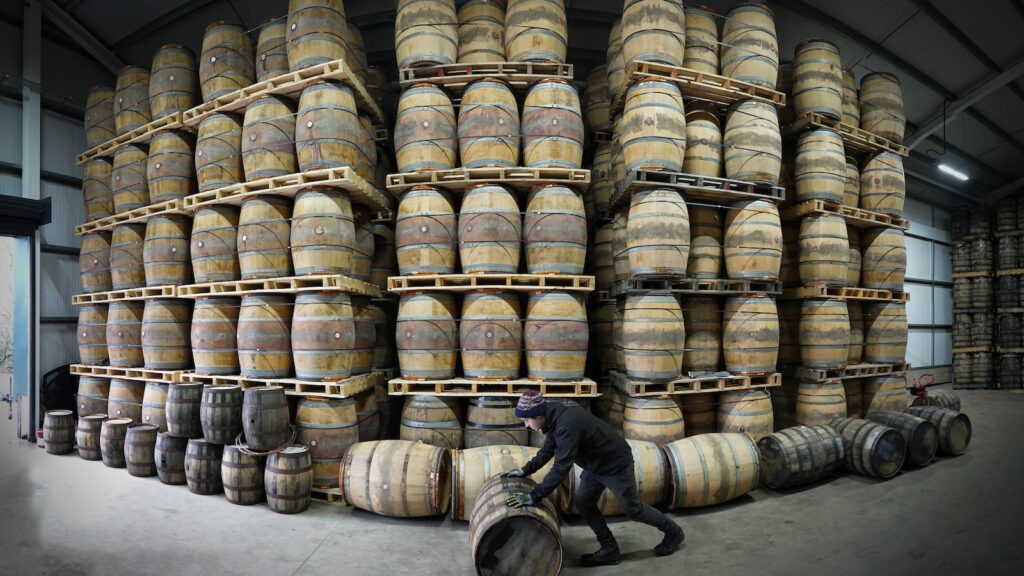 Palletized warehouses, like the one pictured at Isle of Raasay Distillery, have tightly stored barrels that sit vertically.

Sounds like a great solution, right? Not necessarily. “The liquid did not age the same,” Noe explains. “It ages slower to get to the same place, and you really don’t have the airflow. We put in some Big Ass Fans [a real company]. We got those moving air, but it’s hard to move air in between the barrels, because we stuck ‘em tight both ways. When you get into a rack-style house, they’re horizontal; they’re not on top of each other. You don’t have fans moving the air, but you have a lot of natural airflow in the old rack-style houses.” He notes that whiskey from Beam’s palletized warehouses is used in younger bottlings like Jim Beam White Label, but even then, it has to be blended with whiskey aged in rickhouses to get the proper flavor profile.

Palletized warehouses work best where the climate is controlled either naturally—as in Scotland, which is cool and humid and lacks Kentucky’s extreme temperature shifts—or artificially, in warehouses that use heat-cycling (alternating heating and cooling to mimic natural sequences). Woodford Reserve is an example of the latter; it has traditional rickhouses, but has recently built six palletized warehouses, with a seventh under construction. “As long as we heat-cycle and have great ventilation, I’m okay with palletized warehouses,” says master distiller Chris Morris. “We’re able to do that—at great expense. We have massive vents, exhausts, and fans, so we’re making sure that those barrels are getting complete exposure to heat changes and air circulation.”

Across the pond, William Grant & Sons, which owns Balvenie and Glenfiddich, among other distilleries, has been building palletized warehouses since the 1990s. Master blender Brian Kinsman says they “bring with them some significant operational benefits, and while they can get quite hot at the top during our rare warm summers, the overall maturation is comparable with the more traditional warehousing methods.” 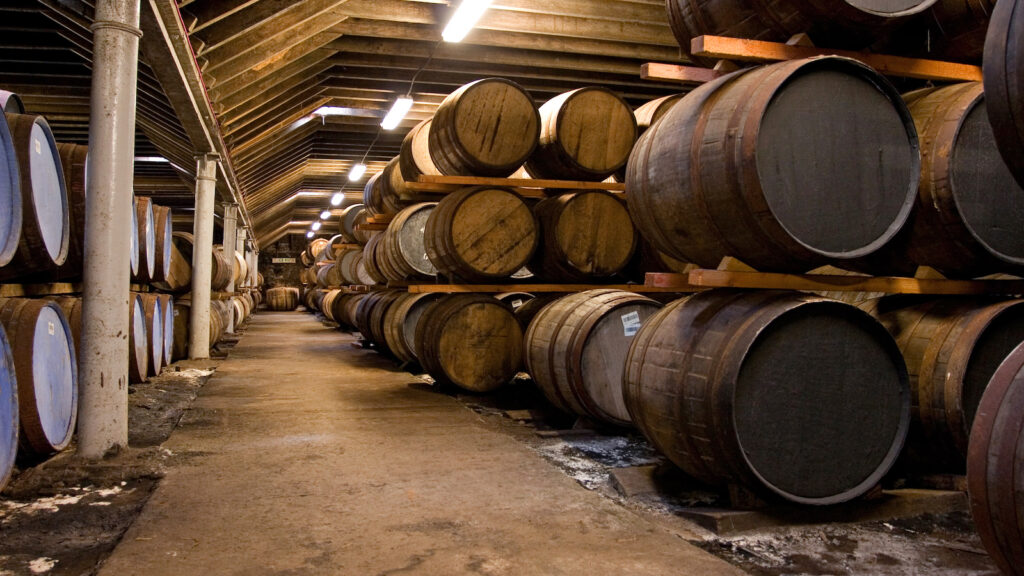 In Scotland, traditional dunnage warehouses have earthen floors and stone walls that regulate temperature and humidity naturally. (Photo by iStock/gegeonline)

In Scotland, “traditional” means dunnage warehouses. These single-floor warehouses, with earthen floors and stone walls, regulate temperature and humidity naturally. In a country with minimal seasonal variance, the climate inside the warehouse remains consistent, which allows for slower, longer aging. The global brand ambassador for BenRiach, GlenDronach, and Glenglassaugh, Stewart Buchanan, notes that Speyside-based BenRiach “has dunnage warehousing dating back to 1898. The casks are stacked only three high, which is a height of around 7 feet. This gives the spirit an extremely even and consistent maturation over the many years in casks.” Meanwhile, Glenglassaugh has both dunnage and racked warehouses. The oldest and rarest whiskies are stored in dunnage, while the rackhouses hold ex-bourbon barrels of more recent vintage, most of which are intended for blending. While the temperature fluctuation isn’t as extreme as in a Kentucky rickhouse, Buchanan says that there are still variations that result from differences between lower- and higher-level racks.

David Stirk, who founded the Creative Whisky Co. and now consults widely in the scotch industry, claims that the earthy atmosphere of the dunnage warehouse comes through in the flavor of whiskies aged there. “It is likely that the dunnage ambience is swaying my perception and adding to the whole experience,” he acknowledges. “But, having said that, some of those fungus, mushroom, moist, and damp flavors that I associate with dunnage have been to the fore in many whiskies that I have tasted.” Clearly blind-tasting is required here, for the purposes of both research and enjoyment.

Other distilleries put their unique spin on barrel storage. Four Roses uses single-story rickhouses, which provide good ventilation without the temperature extremes of a multi-floor rickhouse. “We want, by design, the most consistent aging,” says master distiller Brent Elliott. “If we pull a barrel out, we don’t want to worry about whether it came from the first or sixth tier. And we typically don’t have to worry about that for bourbons between 5 and 8 years old.” Most bourbon distilleries like having a number of different barrel profiles to draw on when putting together different whiskeys. For Elliott, Four Roses’ 10 different recipes (made with five mashbills and two yeast strains) provide enough variables to play around with, so adding to them with different maturation profiles isn’t necessary.

Michter’s uses traditional rickhouses, but with only four stories instead of the seven or so common at most modern distilleries. Michter’s also heat-cycles its warehouses. Master of maturation Andrea Wilson explains, “We are trying to keep continuity of aging across all four floors and use heat cycling during the winter to…increase the maturity of all the barrels in the house similarly. This is very important to us because we do so much single-barrel product and because our batches are so small, as our tanks are only sized for the equivalent of 20 full barrels each.”

There’s no perfect, one-size-fits-all way to store whisky barrels, and that’s for the best. Variation that results from different maturation conditions means more diversity of flavor, giving drinkers new angles for enjoyment. While unpredictability can seem intimidating, in this case, it’s something to embrace.