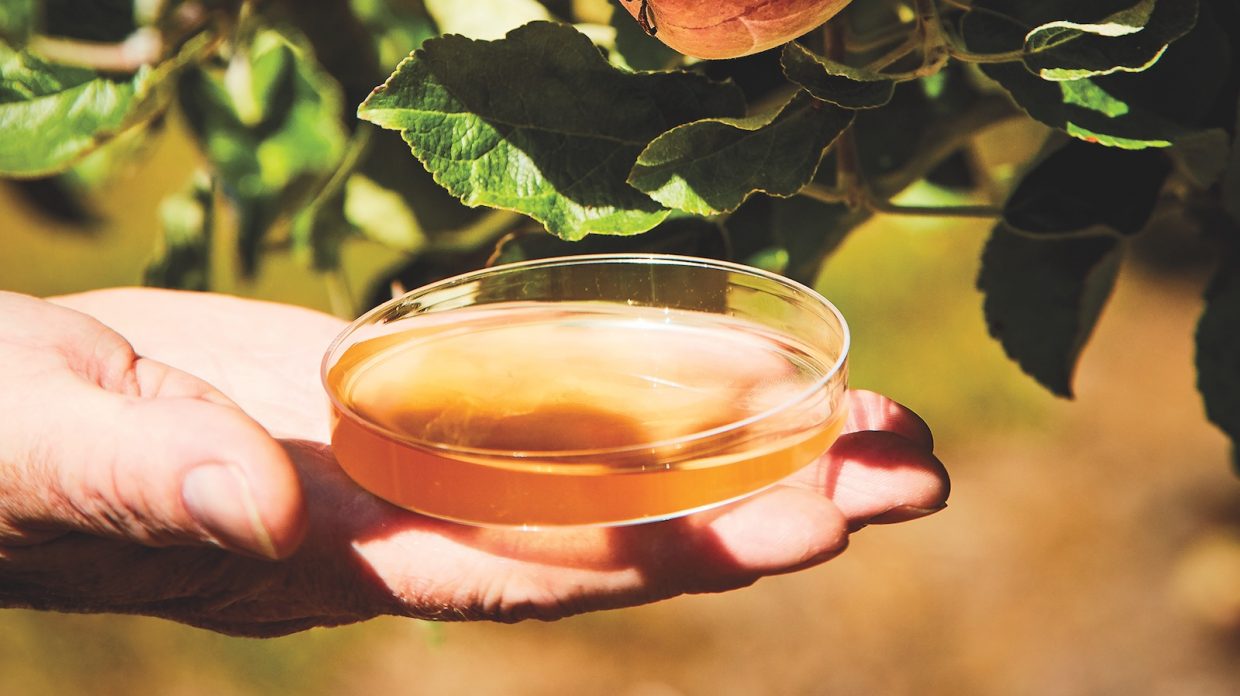 Distilleries like Chambers Bay are using wild yeast to give their whiskies an organic jumpstart. (Photo by Emily Kate Roemer)

Distillers of whisky are known to proudly show off their water source, share the provenance of their grain, and occasionally even malt it on-site, all in the quest to create something that speaks of their place. But to truly understand the local nature of Chambers Bay Distillery’s straight bourbon, you must look much more closely. In fact, a microscope would come in handy.

About five years ago, Jeff Robinette, distiller and co-founder of Chambers Bay, placed some agar plates—Petri dishes with a growth medium—under Macintosh apple trees in a nearby orchard. From the collected microbiological thicket, Robinette—with extensive experience in biochemistry from his long career as an embryologist—eventually isolated yeast. When he began distilling in 2014, he was using commercial yeast, but once he propagated yeast isolated from the orchard and started producing whiskey with it, his distillate changed. It had a bit less of the bready, sourdough smell and more of an apple cider tang. That note echoes in the apple pie-like sweetness that punctuates Chambers Bay’s bourbon.

Outside of Kentucky, where yeast is often celebrated among bourbon distillers, yeast may be the most underrated ingredient in whisky production. Anyone who’s visited a distillery will have surely heard a tour guide wax rhapsodic about the elegance and distinct shapes of the copper stills, or the dark art that happens to a whisky as it ages in the oak barrels that are credited with much of a whisky’s ultimate flavor (and rightfully so).

But these visually stunning processes overshadow the delicate, near-invisible activities of Saccharomyces cerevisiae, the species of yeast traditionally used to turn sugars in cereals and fruits into alcohol. In the fermentation tank, yeast is added (or pitched) into the mash to gorge on the sugars and metabolize them into alcohol and carbon dioxide, a microbiological process so complex that it’s tempting to wave it off as alchemy. The resulting low-alcohol beer is distilled, concentrated into high-alcohol spirit, and then put into barrels.

Many distillers, as well as brewers and winemakers, buy commercial S. cerevisiae that’s ready to be pitched into the mash. However, the discovery and isolation of yeast by Louis Pasteur in the 1860s is actually a fairly recent development in the history of brewing and winemaking. Before then, fermentation was left to chance—any number of wild yeasts could start the process. 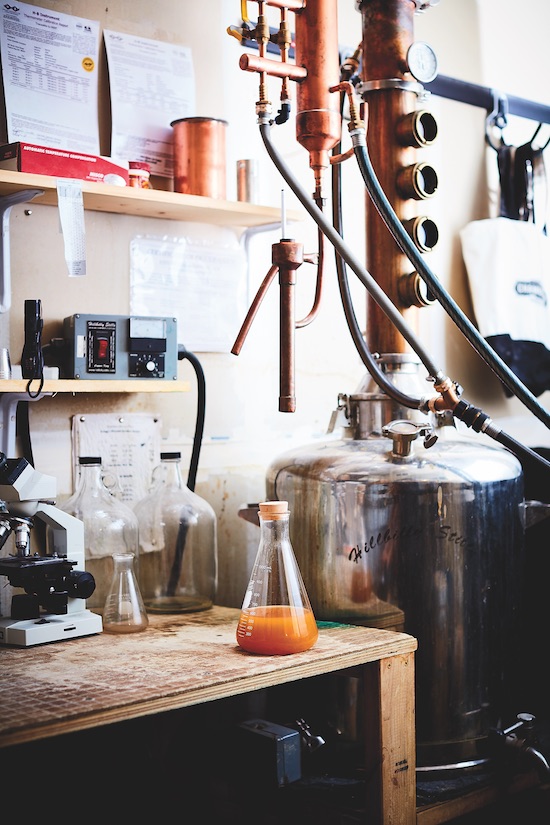 Once Chambers Bay cultivates wild yeast, the microscopic organisms make their way into the lab. (Photo by Emily Kate Roemer)

“Yeast is all around you, everywhere, every day—billions of microorganisms are living in the air you breathe and the surfaces surrounding you,” explains Chris White, founder and CEO of White Labs, a liquid yeast and fermentation company. “If you took a swab of any surface—food, your countertop, your skin, your remote control—and looked at it under a microscope, you’d find yeast.”

Leaving the task of fermentation to whatever yeast happens along is a wild card, but that risk is easily controlled by using commercial yeasts. These yeasts are pure, predictable, and free of contaminants, qualities critical for industrialized production where consistency is non-negotiable. Many whisky makers are fully satisfied with common distiller’s yeast—the microbial analog of the Cavendish banana, a species that’s become ubiquitous despite the vast genetic diversity in the genus. Others maintain their own proprietary yeast, typically a strain that’s been domesticated and evolved in-house for generations—of both yeast and distillers.

But to introduce distinctive flavors to their spirit, some distillers are exploring the impact of untested yeast on whisky production, and they’re looking to nature in their search. Different yeasts produce different flavor compounds at different temperatures. In the world of biochemistry, a one-degree difference at the point of fermentation can have a tsunami of an effect.

“When I went into distilling, I was frankly shocked at the irreverence that everyone treated yeast with. It’s simply a commodity to turn sugar to alcohol,” says Dr. Bill Lumsden, director of whisky creation, distilling, and whisky stocks at Glenmorangie and Ardbeg, who studied microbial physiology and fermentation science for his doctoral thesis. “Not only is it badly prepped prior to pitching, but everyone in Scotland uses the same yeast. Distillers don’t view it with the same importance as brewers or winemakers.” A yeast’s characteristics are more apparent in beer and wine, after all, because the final product is much closer to the raw fermented liquid than something that’s been distilled.

Glenmorangie Allta, released in January 2019, is the tenth in the distillery’s series of limited Private Edition whiskies designed to explore innovative aging techniques or ingredients. Allta, Scots Gaelic for “wild,” is a single malt fermented entirely with a yeast that Lumsden discovered growing on barley in the distillery’s field. Following 15 years of research, planning, and experimentation, Lumsden isolated, propagated, and pitched it into his wash. He knew the final whisky would be distinctive from the moment he tasted the distillate. “When I compared it to the classic new make [made with distiller’s yeast], it was just different,” he says with an air of delight.

The pursuit of terroir, that catch-all term often applied to wine that essentially means “sense of place,” drives Rob Arnold, head distiller at Firestone & Robertson Distilling Company in Fort Worth, Texas. When he started in 2011, he went on what he calls a “wild yeast hunt” to isolate a genetically unique strain from the wilds of Texas. He ended up isolating a strain off a pecan nut. In his mind, it lends Firestone & Robertson’s TX straight bourbon a taste of Texas.

“It gives cool spice notes, like clove and cinnamon, plus raisin and dark fruit notes,” Arnold says. “I know it’s from the yeast because at the beginning, I made batches of bourbon with commercial yeast. Now we get cinnamon, fig, and dark fruit that wasn’t present in those first batches.”

In carefully selecting and culturing wild yeast, Robinette, Arnold, and Lumsden are engaged in the microbiological equivalent of breaking a wild stallion. It’s more intentional than the original wild fermentation, which involved simply leaving mash to ferment in an open-top container, much like those used by Belgian monks to make lambic beer. Such a reckless fermentation risks introducing bacteria that can take over when the yeast runs through its cycle and dies out—typically after about 48 hours. If a wild species like Lactobacillus, which could be living in the wood of the fermentation tanks, sabotages the mash, feasting on leftover sugars and expired yeast, the grain mixture will become more acidic. Acids react with alcohol to form esters, compounds that create fruity flavors. Lumsden experimented with leaving the fermenter vessel open when he was formulating Allta, but the effects of Lactobacillus dominated those of the yeast, so he ultimately chose to ferment the wash in closed-top tanks.

Answering The Call of the Wild

At Griffo Distillery in Petaluma, Calif., distiller Roxanne Fernandez Tiburolobo, who has a background in molecular toxicology, approaches wild fermentation with a hybrid process and a bit of poetic license. She first inoculates her Stony Point whiskey mash with a known strain of distiller’s yeast before leaving it open to a roll of the dice with local microflora. 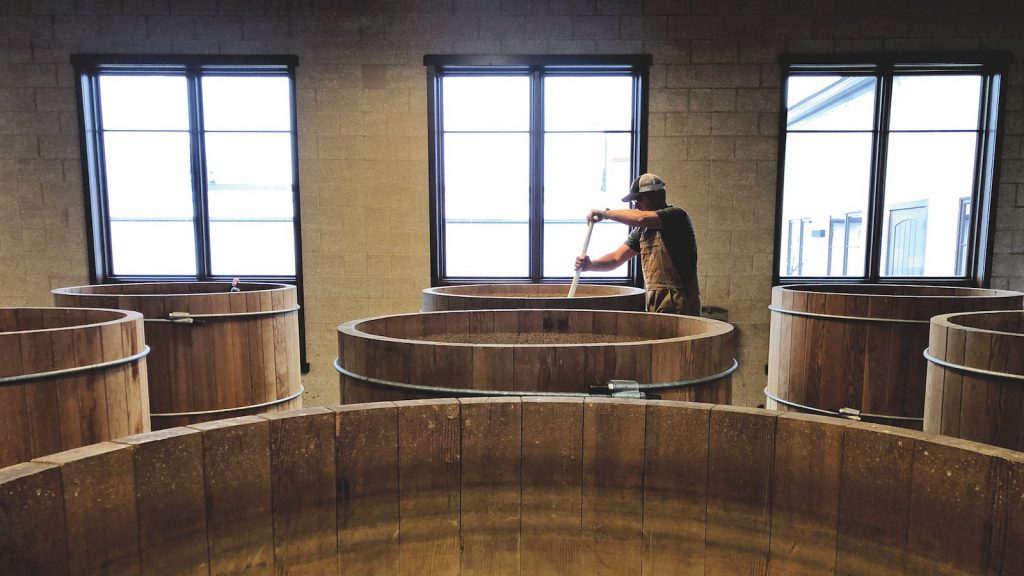 At Leopold Bros. open windows permit wild microflora to enter the distillery on the wind.

“Any time that you’re leaving yourself open to organisms that can colonize, it’s a form of wild fermentation,” says Fernandez Tiburolobo. That includes organisms that colonize on the grain both during its lifecycle in the fields and when it’s in the distillery. “Many of [the] small-scale operations are practicing some form of wild fermentation unless they’re doing it in a completely sealed environment and boiling the wash,” she adds. “Maybe they’re not doing it intentionally, but it’s something to consider.”

In the Hudson Valley, Christopher Briar Williams, chief distiller and blender at Coppersea Distilling, calls his fermentation method “half-wild.” Describing Coppersea as “a heritage-method farm distillery,” Williams displays an evangelical fervor when he speaks of the local heirloom grains he uses and the provenance of his Excelsior bourbon. He employs modern technology to the vintage practice of wild fermentation, aerating the mash for 24 to 48 hours using a compressor to feed ambient air into the fermentation tank.

“The agitation quality of aeration continuously alters the surface, like an open fermenter. Inside that mash, wild yeast is propagating in an oxygen-rich environment,” he explains. Once the mash is aerated and cooled for 48 hours, Williams starts to see surface activity that indicates fermentation is underway. At that point, he pitches a commercial English ale yeast, selected for its alcohol yield, which is greater than what wild yeast can achieve. (Yeast metabolization varies by strain; distillers’ and brewers’ yeasts have typically been cultivated for efficiency.)

Even with the risks and aggravations of using wild yeast, some traditionalists will not be deterred. At Town Under Black in Tucson, Ariz., co-owners and co-distillers Rebecca Caroli and Vladimir Novokschenov employ only open fermentation for their Mahala moonshine, a corn whiskey made from floor-malted heirloom blue corn, which will be released later this year.

As a trained archaeologist whose ethnographical work looks at beer, wine, and distilled spirits in ancient cultures, Caroli is motivated by historical accuracy. “The history of the region is so rich around us,” she says. “The state of Arizona contains every single micro-climate; the Sonoran Desert is the most biologically diverse desert [in the U.S.].” Town Under Black is located in a basin, so there’s yeast from mountain flora and desert vegetation all around it. “We’re making spirits out of all of the ingredients grown in the desert that were historically made into beer and wine by tribes, cowboys, and ranchers,” Caroli adds. Among Town Under Black’s current releases is Six Sky, a blue-corn spirit infused with cacao husks.

Part of being historically accurate means staying faithful to the product’s inconsistency over time. “We’re making it clear: every batch is different. If you’re buying it, you’re buying it for the unique experience of the bottle, like a wine vintage,” says Caroli.

Todd Leopold, co-founder and distiller at Leopold Bros. in Denver, designed his distillery building with wild fermentation in mind, strategically placing windows to permit microbial elements to enter on the wind. After pitching commercial yeast and letting it run its traditional 72-hour course, he leaves the mash open to the elements for 48 hours, exposed to a microbiome that includes the ambient yeast in the air, the Lactobacillus that came in on the grains, and the bacteria ingrained in the wood fermentation vessels.

“We’re trying to make [it] so we get bacteria that will mutate and give us our own house flavor,” he says, noting that he’s so far consistently found octyl acetate, an ester that produces an orange marmalade note detectable across Leopold’s whiskeys. Leopold takes no issue with distillers who aim for consistency and impeccable quality control, but he values the unexpected outcomes that wild fermentation creates. “We’re trying to breathe life back into the whiskey,” he says.